How can I put this delicately? Or “Prader-Willi continues”

I primarily post relaxing images on my blog and generally write about relaxing things. That’s why I avoid politics, religion and advertising. But my rehabilitation career is late in its third decade and not every moment has been relaxing. I’ll return to that at the bottom of this post. 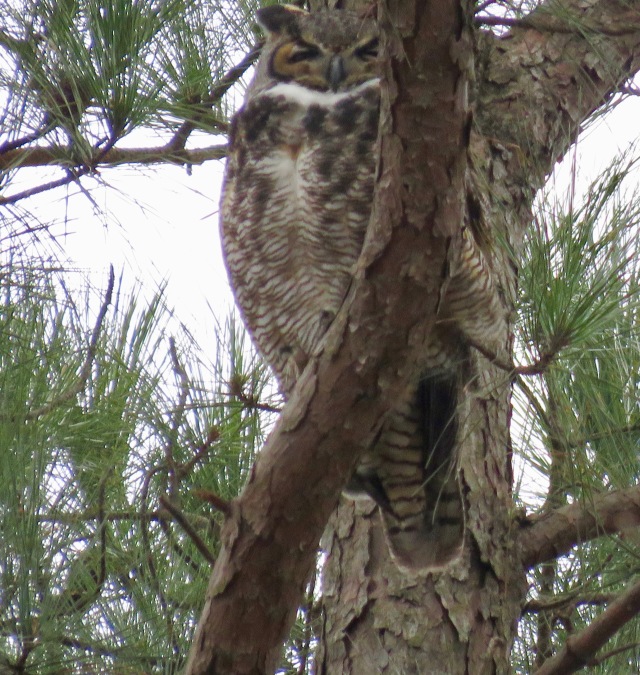 Imperfect image of a Great Horned Owl, but I was so grateful to even see one

Miserable image but this is the first time in my life I’ve ever pointed my camera at a Great Horned Owl (Bubo virginianus). Many thanks to Michael Marra for  pointing it out. Michael is a true pro photographer; check out some images on his web site. I was fortunate to be walking the dogs earlier this afternoon when he was photographing (pro photographing) this bird. His pictures are way better. And he’s a nice person too.

Meanwhile. On Thursday, February 21 Evelyn and I walked to the Shore Dog Cafe for lunch. We were walking home north on Forest Avenue when we heard and saw a commotion in the trees. At first we thought it was a Red-shouldered Hawk catching a squirrel. We looked more closely and saw a pair of hawks mating! Of course I never go anywhere without my camera. Except when we’re walking out to lunch. Oh well. So I’ve been watching that spot and Tuesday one of the hawks was perched on a wire. I pulled over and snapped this picture and left: 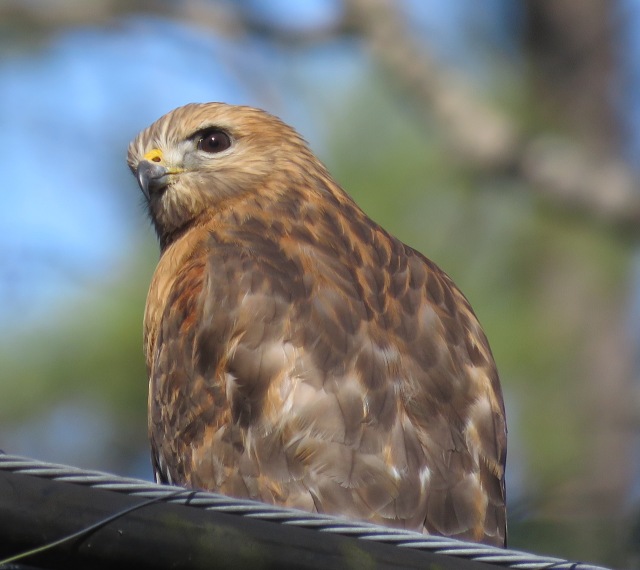 Red-shouldered Hawk keeping an eye on me

I like birds 365 days a year but peak birding season in Virginia begins early March and runs through at least May. They’re all beginning to show up. Friday at the Y I saw a tree full of birds that in years past I would have written off as starlings. This was the first image I took: 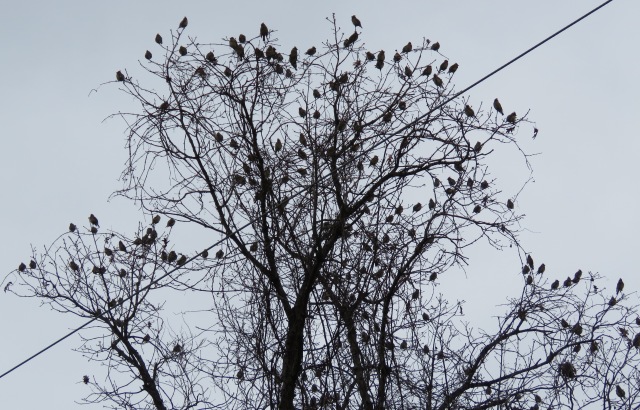 At first glance I thought these were starlings. Then I zoomed in – see below:

But then I zoomed in and it was a flock of Cedar Waxwings! I had never seen so many at one time! I wish the light had been more favorable, but what a treat; they are so photogenic. And this was in the YMCA parking lot!: 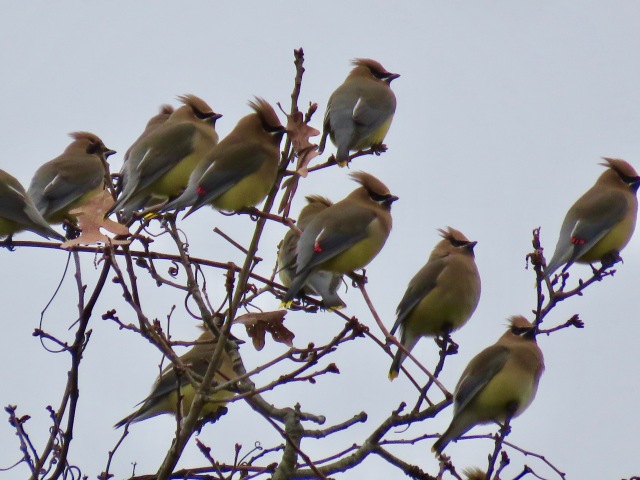 A little zoom reveals a lot of lovely detail:

Peak birding season and peak flower season occur roughly in tandem. Evelyn’s growing  daffodils throughout our yard, but I photographed this small nodding daffodil in a small bed beside our driveway Thursday: 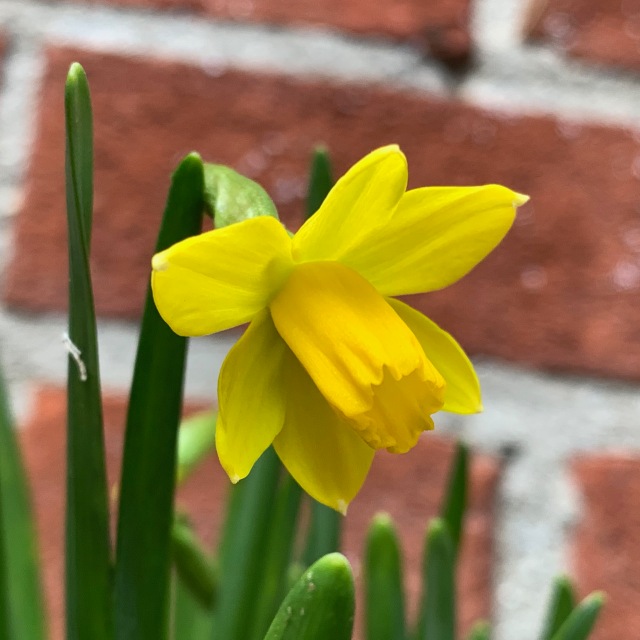 An early specimen of Evelyn’s seemingly infinite crop of daffodils

Evelyn got me started loving gardenias but I am an inept gardener. I’m awesome with dandelions and I can grow an award-winning clump of onion grass. But I did stop and buy a gardenia at the florist Wednesday morning. This sight and smell will get us through the coming weeks as Spring gains traction and becomes unmistakable and unstoppable: 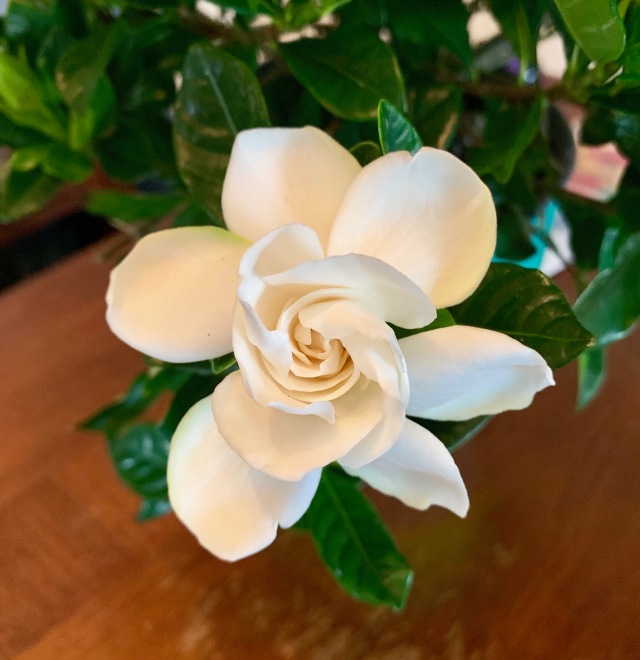 I always feel like I should be able to smell it through the monitor. Gardenias are incomparable.

The river flooded earlier this week and crested Monday near midnight at 16.2’. We hiked at Pony Pasture (via Landria Drive) Tuesday around twelve hours later. It had gone down to 15.7’, so it dropped about six inches. We had to make a long detour to get around this bridge: 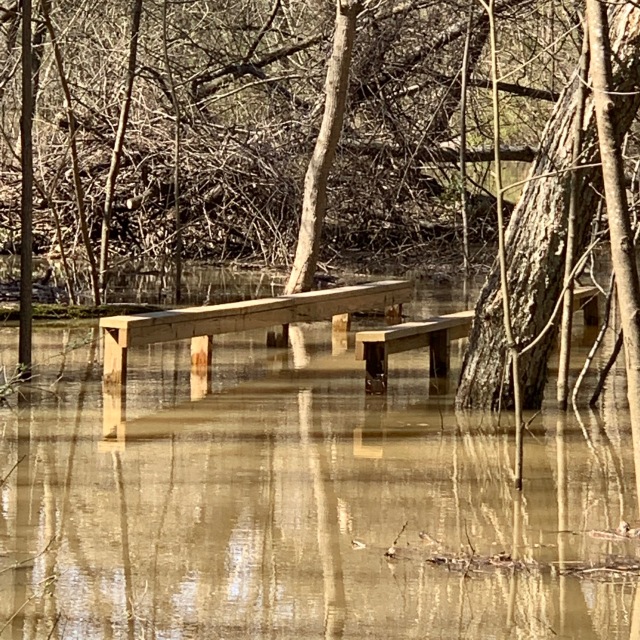 My shoes are waterproof, but I chose not to put them to this test

Then we went up to Charlie’s Bridge; time for another detour: 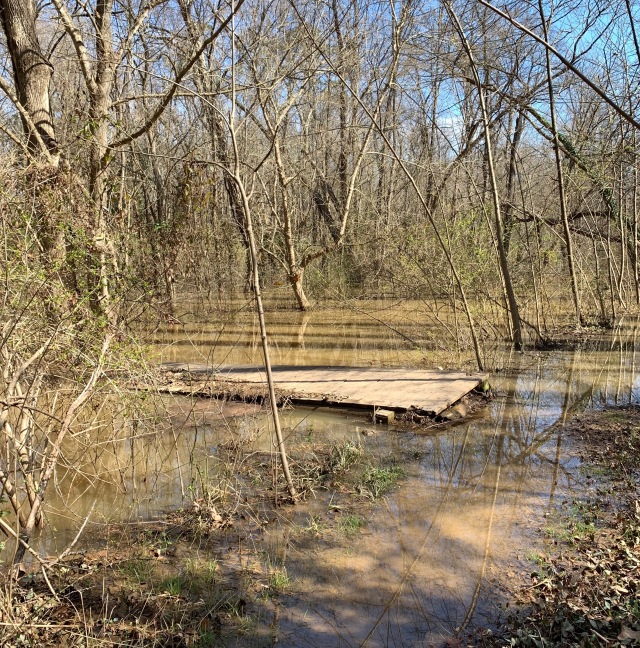 We took a good hike yesterday, though the river was still high and the trails were still muddy and the main parking lot was closed. As I type these words Sunday afternoon the river’s gone down to 10.0’. It was a good day for Bryan Park – and I got to photograph my first Great Horned Owl! Our Dad used to whistle at them at night and they’d whistle back.

Anyway. Here’s my story from an earlier era in my rehab career. Enjoy, have a great week, come back next Sunday, all best,

How can I put this delicately? Or “Prader-Willi continues”

On the Prader-Willi Syndrome Association website it says that the third phase of Prader-Willi Syndrome “is the development of an insatiable appetite/drive to eat, accompanied by intense or relentless food-seeking. This is the classic phase most people typically associate with PWS”. It also says that people with PWS have “hyperphagia (an uncontrollable drive to eat), combined with weight gain on fewer calories”. The same website says people with PWS often have “cognitive disabilities, behavioral problems”. This person couldn’t speak. And in my business we say “behavior is communication.” I’ll just call the guy Henry.

Consider for a moment that eleven word stretch that says “an uncontrollable drive to eat, combined with weight gain on fewer calories.” If you were designing a way to make a person’s life miserable, that would be the perfect way to do it. And it’s genetic. I have an old friend who is a psychologist. If he heard about Henry’s frustrations he’d say Henry “comes by it honestly.” My own drive to eat is ostensibly controllable and my weight gain is on the normal amount of calories and it’s still a challenge!

The part about “put this delicately” is the way this food-obsessed person with no verbal means of communication communicated his frustration. It began with the food he put in his mouth and chewed obsessively so he could use it as a weapon. But only when he was angry or frustrated. It changed my career path when it came out the other end and he continued to use it as a weapon.

If you’re at a lecture or reading a book about PWS, it can be dull or forgettable. If you’re a parent, not so much, and if a person is using their partially or completely digested food as a weapon, it is not dull. And it will not be forgettable for the rest of your life, or at least I haven’t forgotten it.

Henry lived in a group home and when he came to school on a bus he was sometimes “escalated” – his behaviors were spiraling out of control. I’ve worked with a lot of non verbal people with behavior problems. At that point, I hadn’t. Since “behavior is communication,” I watched all of his behaviors so he would communicate when he was having a difficult morning. The first thing we’d do is go in the bathroom and I’d ask him to wash his hands. Then he’d start pressing the dispenser bar on the paper towel dispenser. If he was having a normal day – most days were normal – he’d press it two or three times and we’d finish up and go work on our activities. But if he’d had a bad dream the night before, or not liked his breakfast, or had a disagreement with one of his housemates, or not liked the music in the car on the way over – it could have been anything – he’d become escalated. He’d press the bar on the paper towel dispenser ten or more times. I’d have to tell him to stop. Picture that pile of brown paper towels reaching from the dispenser to the floor, piling up. But when that’s going on, he’s in a trance. It was practically like a seizure. I’m not sure he could even hear me. It’s some vestige of PTSD that causes me to tense up a tiny bit if I’m in a public bathroom now, twenty years later, and hear someone pressing the bar on the paper towel dispenser a lot. We’re all so funny, what impresses itself on our brains.

Henry was super escalated that day and I sent him into the bathroom stall to  sit down and go to the bathroom. He did – and a moment later, opened the door and came out with his hands full of it. He attacked me with it. Rather than recreate from memory, here’s my almost-twenty-three-year-old journal entry, excerpted here with names changed:

“Slinging feces” is what the staff call it when Henry starts taking a crap and throwing it on the walls, etc. I think that there are two factors that lead to this behavior: 1) Henry has to be “escalated,” another work euphemism for “pissed off,” or whatever. I like that term. Henry gets escalated kind of often, so it takes a light touch to avoid that. The second factor is 2) Henry has to be alone. And it ain’t, as I am fond of saying, rocket science, to avoid that happening. You just follow him wherever he goes. I told the boss today that as long as I was there (at work) and Henry was too, no shit was coming out of that bathroom – period. They’ve since switched his old one-on-one to another case, and I have Henry all the time. For better or for worse.

I probably won’t have nightmares about it, because I’m not a nightmare type person, but at the same time I’ll probably never forget the sight of Henry walking out of that right-hand stall today, zombie-like, a soft and putrid brown mound of his own feces overflowing out of each end of his hand. I’ve since learned that I need to give him choices, so I should have said to flush that back down one of those three toilets, but I just told him to flush it back down the toilet, so he threw it at me. My reflexes aren’t particularly fast, but his are even slower, so that initial launch landed in a blob on the edge of the sink. I was still clean up until that point, but when he attacked me, it was all over. Scratch one new shirt from Eddie Bauer. I didn’t need those top buttons anyway. I’m glad I was able to keep him from biting me. I was glad when Joel happened to appear at the door.

We’ve got another guy there, Keith, and he’s attacked a lot of people, mostly males, and before he attacks, he asks them to puff up their cheeks

The “Joel” I referred to at the end – this was purely a random chance – was the Director of the Behavior Intervention Program at VCU. And he had to use the exact bathroom I was in at the exact time I was dealing with the messiest behavior I’d ever been around. So I got to learn in real time to how to deal with a severe behavior problem, from an international expert on behavioral intervention. How cool is that? How could that timing have been any more awesome?

After an incident like that, your scale of what is off-putting and causes you alarm and consternation is deeply and permanently recalibrated. After you’ve been attacked with feces, other stuff that people say or do becomes less of a big deal. It prepares you for a career with people who have some behavioral challenges, because you’ve probably gotten the worst behind you right at the beginning.

9 Responses to How can I put this delicately? Or “Prader-Willi continues”