Friday on my mind

Alternate title: “For lack of a better title.” It’s been a fun week though – lots of reptiles and a stray amphibian here or there. I did photograph one non-domestic mammal (white squirrel again) but I haven’t seen any deer recently. I did a couple of night shots (in addition to the moon) that I’ve never done before. I got several “double” adult skinks at Deep Run Monday, but I came back Friday and got another that I like better. Who knows what it means for a reptile to “think.” Their primary drive is to pass their genes to a new generation. But before they can do that, they have to breathe and drink and eat – always. They observe. At the river I always ask Mackey and Turner if they see or hear or smell anything I’m missing. I find it much easier (so I believe) to divine a dog’s thoughts and/or emotions than I do a skink’s. Since dogs are mammals like me. With skinks, who can say:

There is a Northern water snake  (Nerodia sipedon sipedon) picture farther down this post.

I noticed as I got farther down this post, I was writing a lot about the way I interpret the thoughts and emotions of non-human animals through my own thoughts and emotions. I do that all the time but I was doing it way more than usual in this post. For around a month I’ve been reading Eye of the Albatross: Visions of Hope and Survival by Carl Safina. Mr. Safina works hard to “get inside the mind” (my expression) of the animals he writes about, and his writing is so captivating I find myself drifting in that direction. As an aside – that book is as much about “visions of hope and survival” as it is about albatrosses. It is in every way outstanding.

When Evelyn came home from work late Monday, she told me she’d seen the moon and it was a very small waxing crescent moon. Since our house faces mostly east, I’d never seen one! Can you believe it? They set in the west and I almost literally never see open sky in that direction in the evening. So I took my camera outside and raced up to the corner where I have a clear view to the west. I took this picture as the moon was setting almost directly over the Westbury Apothecary. This is not a pro shot (it’s barely even an amateur shot) but I like the way it looks:

That was a really new moon – only 2 days old on Monday evening, according to an app called “Sun Surveyor.” 5% full. As I type these words (Sunday 4-ish, broad daylight) that moon is 8 days old. It’s 60% full and growing. The Monday Westbury image was at 290º on the compass (a smidgen north of west) and a mere 2º above the horizon – it was about to disappear (set)! Right now it’s much too cloudy to see it, but if today was clear it would be plainly visible. It’s at 97º (a hair south of east) and 30º above the horizon and climbing. It’s fascinating (if you’re me) to learn (and continue to learn) all this stuff.

I’ve been watching a lot – I always watch a lot – and seen few raptors of any kind recently. I’ve seen more than zero, but drastically less than I’m used to in May. I’m uncertain why that is. We’ll see what turns up. My brother Kevin recently (this week) saw an active pair of ospreys near the Richmond Volleyball Club. And his wife saw – and photographed – a Sandhill crane in western Hanover County! Things will appear this week. They always do.

Speaking of things that appear. I hadn’t seen the white squirrel in a while but she reappeared this week. I’m not 100% certain but after examining a few pictures, I am ~85% certain this is a female. I got a picture of her watching me from a mossy tree root Friday. I liked the green background and how brightly her white coat stood out:

Thin week! A few birds. Brown thrasher (Toxostoma rufum) on my feeder this week. They thrash (or at least I always thought) mostly with their feet and possibly their beaks. But when I see this image I suspect they use that tail some too:

It’s tempting (to me, anyway) to describe animal expressions in human terms. But interpreting cardinal expressions or skink expressions through the lens of a human mind is bound to be inaccurate. But he looks quizzical: 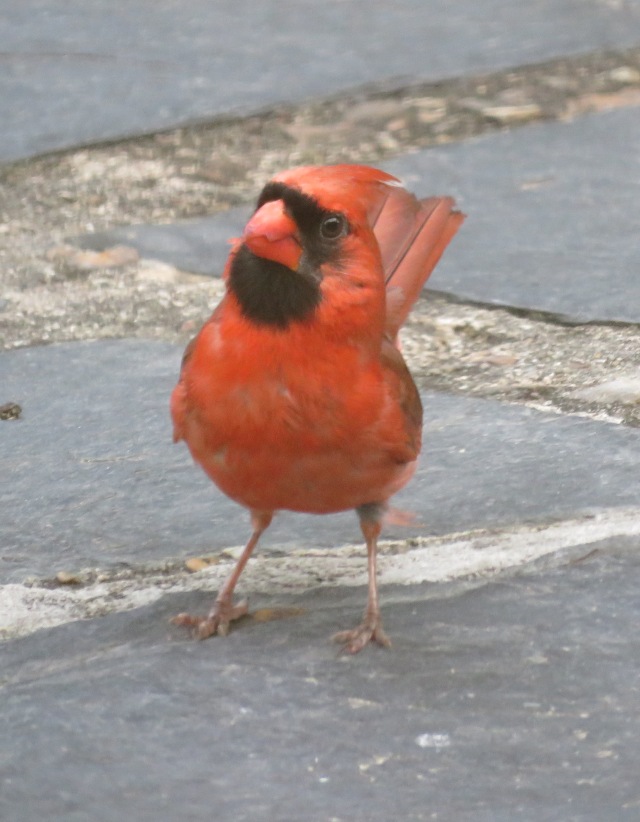 I interpret this expression (if he has one) as quizzical. ymmv

Mockingbird from the same day; not my a/t favorite image:

Mockingbird from an unflattering vantage point

Let me get that snake in here before I forget – I know everyone will miss it if I do:

On a somewhat more appealing note (to nearly every human being) I snapped a quick image of a bluebird on my feeder a moment ago. Have a look:

I got another cricket frog yesterday. We took a Saturday walk to avoid today’s forecast rain. Cricket frogs are really hard to see and I apologize for the poor quality (light) in this image. But I’m always delighted to see one: 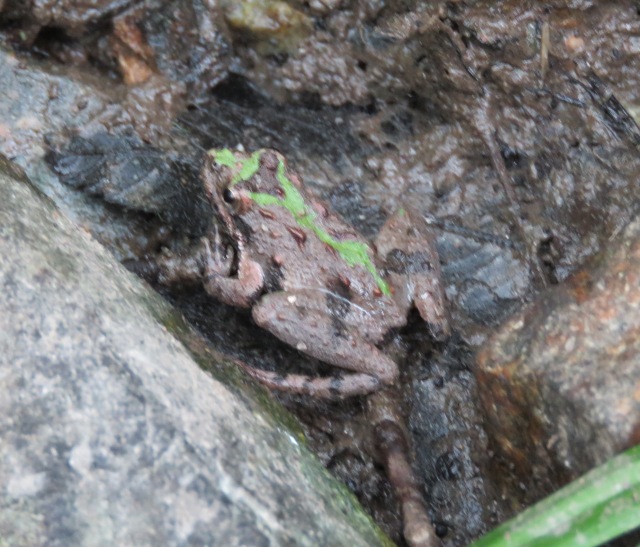 Big clusters of tadpoles trigger me to start snooping around for frogs:

For every frog egg laid, I wonder what percentage lives to maturity. Probably ~0.000001 or less.

Our elderberries have the tiniest blooms beginning. I took this picture yesterday (5/11) morning at 9:30. That’s one small branch from one limb or trunk of one bush. I’m estimating that’s ~5,000 elderberries right there, more or less. Each bush I’m thinking has about a hundred of those clumps. So half a million – or so – elderberries per bush. Possibly as many as a million. I think we have eight bushes. So four to eight million ripe elderberries will appear as if by magic I’m thinking this week. Evelyn had these planted anticipating this magic, by the way. And then we will be mobbed with birds. It’ll be a free for all. You should plant some!:

I predict we’ll have more elderberries than grains of sand on a large beach. Just you wait.

We walked with Yuki at Deep Run this morning but I didn’t take any pictures. I had only Mackey and Turner with me at Pony Pasture yesterday. Here they were, a few minutes before we got back to the car:

Black and brown and green

I am a rehabilitation counselor. I have many friends with autism and traumatic brain injuries. They help me learn new things constantly. I hike with dogs at the James River in Richmond - a lot. I've completed an Iron distance triathlon a year for 11 years. My most recent was in Wilmington, NC in November, 2013. I currently compete in mid-distance triathlons. And work and hike and take pictures and write and eat.
View all posts by Jay McLaughlin →
This entry was posted in cardinals, Dogs, Fun, love, mockingbirds, moon, Pony Pasture, Rivers, Smiles (including "dog smiles"!), Snakes, squirrels and tagged bluebird, Dogs, Fun, nature, Northern mockingbird, outdoors, pictures of the moon, Pony Pasture, Smiles - human AND dog smiles!. Bookmark the permalink.

7 Responses to Friday on my mind