If this isn’t nice…

…I don’t know what is.” – Kurt Vonnegut – courtesy of Andrew

“If this isn’t nice, I don’t know what is.” – Kurt Vonnegut – courtesy of Andrew

Evelyn’s been planting flowers and shrubs and trees around our home to attract birds and other pollinators. Wikipedia quotes the USDA saying the Monarch butterfly (above) “may be the most familiar North American butterfly, and is considered an iconic pollinator species.” Before Tuesday morning (7/30) I’d never seen a Monarch butterfly (Danaus plexippus) in our yard. Thanks to Evelyn’s effort, that changed. And thanks to my friend Andrew sending me this quote, I noticed when I looked at the butterfly I was happy, and I exclaimed or murmured or thought (really I just thought) “If this isn’t nice, I don’t know what is.” Thank you Evelyn! And Andrew! And Kurt Vonnegut! And butterfly!

It was a week ago today Andrew emailed me this quote. But I was caught up in the petty nonsense I sometimes allow to crowd out what’s important in my life and I didn’t take time to look at it. I finally opened it up, not long after I took the Monarch butterfly pictures off my camera and put them on the computer. The quote Andrew sent read “Please notice when you are happy, and exclaim or murmur or think at some point, ‘If this isn’t nice, I don’t know what is.’”  KURT VONNEGUT. I read it just as I was looking at the Monarch butterfly.

And I smiled that daydreamy little way a person sometimes smiles when they’re alone and maybe (hypothetically) thinks “that certainly was timely.”

I had more opportunities to exclaim or murmur or think that phrase as the week progressed. One came the following morning when I saw this gangly young mockingbird: 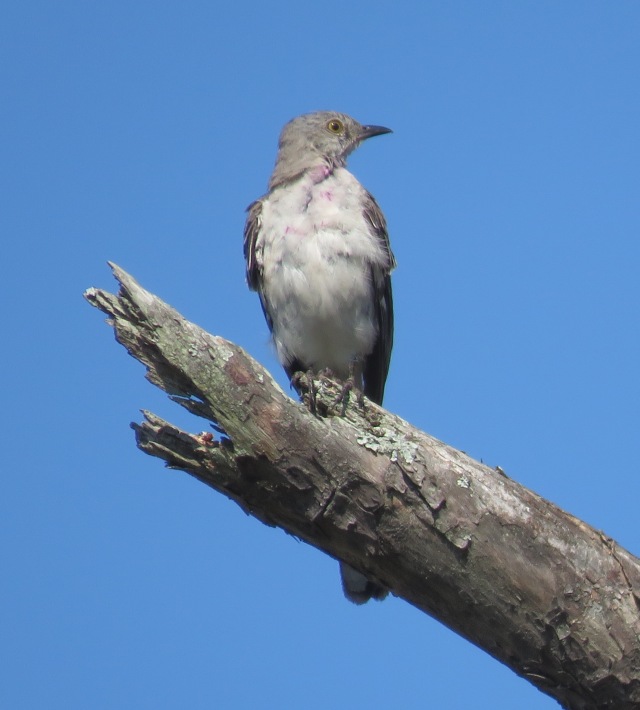 I saw a goldfinch drinking from a puddle at Deep Run park this week. I’d hoped for a better picture but I wasn’t close enough and it was too shady. But look closely. See a faint blur above the goldfinch to its left? It was a large dragonfly darting in and out and hovering around and (it appeared from my human POV) to be making the goldfinch anxious. Or agitated or distracted or irritated; something. The goldfinch twitched every time the dragonfly whirred close. A dragonfly must be huge to a goldfinch. And that buzzing noise – I can’t imagine what that sounded like at that distance. The goldfinch was drinking; I have a picture of it taking a drink. But as long as that dragonfly was buzzing around it was clear the goldfinch couldn’t relax. I see such odd, unpredictable, peculiar things when I observe closely (sometimes):

Goldfinch in foreground, big blurry dragonfly in the upper left

Of course more often I see ordinary, predictable, everyday scenes. Red-tails are the most reliable local raptor. And they hunt from highly visible perches, and I get used to seeing them in certain spots. If you’re in western Henrico County, VA and you drive either north or south on Parham Road at the corner of Ridge Road in daylight, you can look up and see this cross on the top of the Grove Avenue Baptist Church. There’s not a Red-tail up there every minute of every day, but it’s a real high percentage spot. If it’s your lucky day you might even see two at once. This male was up there Wednesday morning around 11:00 when I was on my way home from swimming. He looks real scruffy because he’s molting:

Red-tails live in Richmond fifty-two weeks a year. But the ospreys – or at least the Stony Point ospreys – will head south soon. South as in (I think) to Venezuela. They’ll leave this month or next. They return in March. I’ve written this before, but ospreys eat fish – and nothing else. They’ll starve quick if the water ices over. So they’ll head out before long.

I’m not sure how many are on this nest. Evelyn says she’s seen three, which is not out of the question. During the time I was there, I only saw two (on the nest) but there may have been more. There was a parent sitting on the edge of the tower. More than likely the other parent was fishing. You can see the parent perched out to the right. You can also see what was clearly the dominant offspring with its back to the camera. You can see the white head of a more timid (which in this case means weaker) offspring toward the right edge of the nest. The behavior of these birds seemed out of balance to me. That big one on the nest was super-agitated and the small one never moved. Neither did the bird I think was a parent. I read a gruesome eyewitness story a year or two ago where the oldest osprey nestlings ganged up and killed one that had been born small and late, and it’s an image I’ve been unable to banish from my mind. Survival of the fittest is almost inevitably a gruesome business. Hopefully this is just their normal day-to-day behavior: 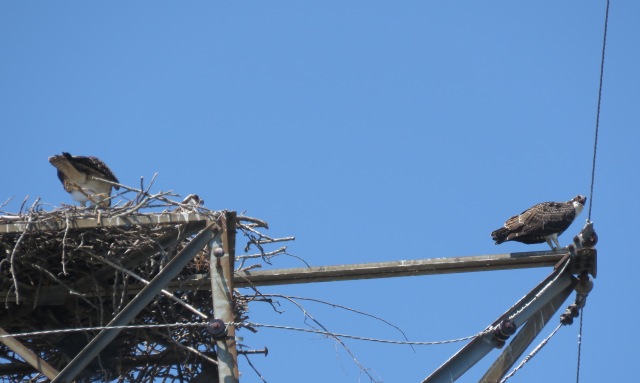 Two offspring on the nest, one adult on the right

Here’s another picture of the dominant bird on the nest:

This osprey was not peaceful or placid. You can see the white head of the other one on the lower right.

So anyway, that’s what the top of the food chain looks like. Mackey and Turner and I had a little hike at Bryan Park yesterday and I pointed my camera into the creek for the other end of the food chain:

Bottom of the food chain.

Flowers are in the food chain too. It would be difficult (for me) to draw a clear line from a dry land flower to an osprey but I’m sure they’re linked together somehow. This is another lovely Rose of Sharon from our backyard:

Backyard Rose of Sharon. If that isn’t nice, I don’t know what is.

And this is one of Ev’s hibiscuses from the backyard. I waited a little too late to get this picture; it’s already wilting a little. They are so fast! I should set up my iphone out there and have it do a time-lapse sequence of a hibiscus blooming. I’ll bet start to finish it doesn’t take eight hours. There is nothing subtle about a hibiscus:

Hibiscus in our backyard 3:50 this afternoon. At noon the petals weren’t curling up.

Almost left this off – Ev was in the Fan yesterday afternoon and saw this:

I am a rehabilitation counselor. I have many friends with autism and traumatic brain injuries. They help me learn new things constantly. I hike with dogs at the James River in Richmond - a lot. I've completed an Iron distance triathlon a year for 11 years. My most recent was in Wilmington, NC in November, 2013. I currently compete in mid-distance triathlons. And work and hike and take pictures and write and eat.
View all posts by Jay McLaughlin →
This entry was posted in Birds, Bryan Park, Dogs, Flowers, Fun, hyacinths, Insects, James River, mockingbirds, ospreys, People, raptors, Red-tailed hawks, Rivers, simplify, Smiles (including "dog smiles"!), Spiders and tagged bryan park, Dogs, Flowers, Fun, james river, nature, Northern mockingbird, Ospreys, outdoors, Pony Pasture, Red-tailed hawks, Rivers, smile. Bookmark the permalink.

3 Responses to If this isn’t nice…