When I sent this picture to Ev (from the river this morning) she said “That’s the same photo you sent last week!” Which, scroll down to the first picture from last week, you can see why she said that! Same dogs, same rocks, same river. She then added “Ha! Same but different”. There’s an expression that says “you never bathe in the same river twice.” It was the James River last week and it was the James River this week but a lot of water has come down from upstream. And gone downstream: 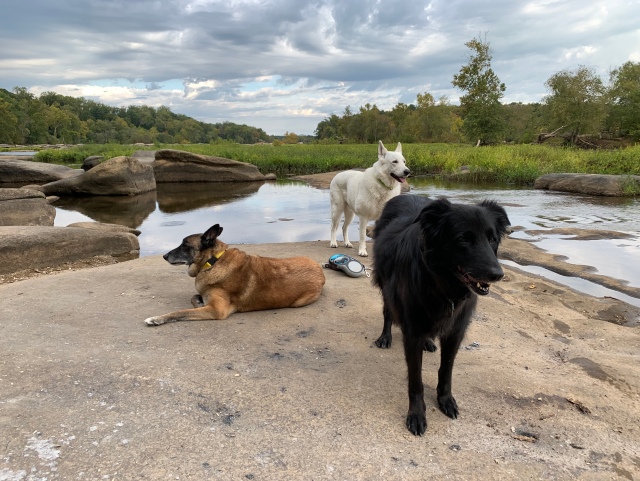 I hope you don’t tire of these pictures; I never tire of taking them:

Those are good animals, they’re really the best animals, but that’s not what this blog post is about. I have friends who are caring for a very ill child. Actually the hospital is caring for her. She’ll pull through but it’ll take a while and it’ll be difficult. I thought about the necessity of the parents to take care of themselves. That’s what Emerson was referring to. As humans we have great qualities such as compassion and caring and empathy. But if we allow ourselves to get sick and exhausted and weak – if we’re not good animals – all those great qualities are the first thing to go. The healthier you are – the better animal you are – the more able you are to express your more “human” capacities.

We continued to be good animals when we hiked for an hour or so after that. We see all sorts of cool stuff in the woods. The keys here are officially “for scale,” but they’re a good accessory for this image:

It finally cooled off enough to have our first fire this week. All the animals in our house are drawn to it – two legged and four legged! It’s not cool enough to get my firewood conveyor belt in gear (that’s what it feels like in real cold weather) but it was nice to take the edge off Wednesday evening. Dash beat everybody to the prime spot:

He who has the sharpest claws gets the fire:

I’ve mentioned in the past my difficulty in photographing Evelyn’s pineapple sage. They’re gorgeous and we have big patches of them in front of the house and behind the house. Ev took this picture and sent it to me. Pineapple sage (Salvia elegans), grown and photographed by Evelyn:

I got a nice Red-tail at the cemetery this week, and I’ll put that picture here in a moment, but I’m currently on the theme of plants Evelyn has growing in our yard so I’ll continue. I took a picture of her hibiscus Friday afternoon around 3:00. A ray of sun was shining on the back of the petals; it lit up like someone had turned a switch. Grown by Evelyn, photographed by me:

Look at that glow. Luck of timing, but still – what a spectacular flower

I’m not seeing a ton of raptors at the moment – I’m uncertain why. But this female reliably perches in the same tree most mornings at Westhampton Memorial Park on Patterson Avenue:

Red-tailed hawk perched above the cemetery on a gray morning

I did get a single bird feeder picture I enjoyed this week. This female Red-bellied Woodpecker (Melanerpes carolinus) was about to fly off with some bird seed:

Female Red-bellied woodpecker with a seed

Speaking of birds this week – there was one in the creek bed at Pony Pasture today. We’re getting some rain (around 7:00 Sunday evening) as I type these words but central Virginia is parched. So when the dogs and I came up to Charlie’s Bridge this morning on our way back to the parking lot, there was a great blue heron below us in the creek bottom. It didn’t notice us for a while but I wasn’t composed enough to compose a good image. It flew up in a nearby tree a moment later. I got a marginal shot but not the one I’d hoped. But still – always fun: 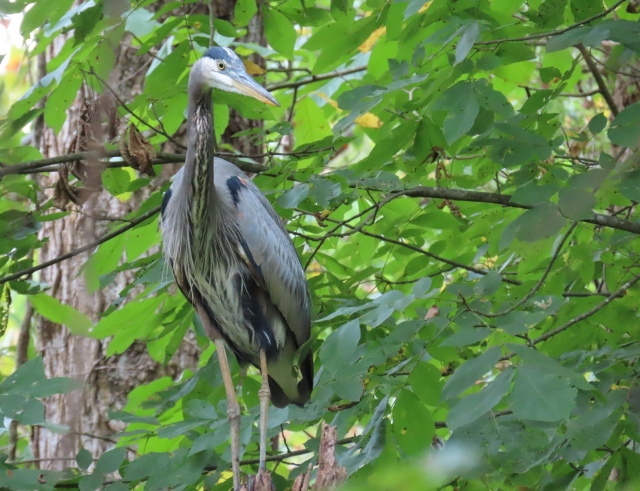 Great blue heron in a tree at Pony Pasture this morning

Emerson’s suggestion to “be a good animal” has always resonated for me. When I’m tired and/or don’t eat right, it is so, so, so difficult for me to think clearly and make good choices. When my friend was telling me about his child in the hospital, I immediately thought of the parents. I trust this hospital; it’ll take care of their daughter. The parents need to take care of themselves. Because to be a good parent, first, you have to be a good animal.

Have a great week, all best,

Being a good animal means eating right and sleeping right and getting a little exercise. It is uncomplicated. And whatever else you do in your life – whatever else you do – you’ll do it better if you’re a good animal. If you’re a parent, a sibling, an athlete, a student, a reader, a writer, a conversationalist, a photographer, a ship captain, garbage truck driver, cancer patient, minister, doctor, lawyer, sales clerk, stenographer, engineer, the roles are infinite but the same story is true for every one of them. If you’re a better animal, you’ll be better at whatever else you do. Plus it feels really great!