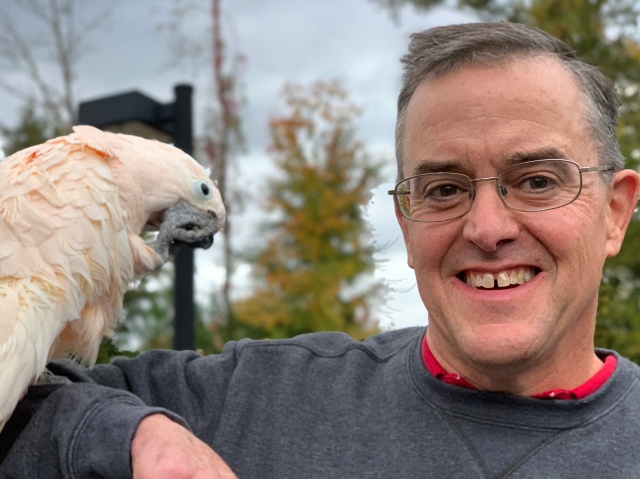 Ev and I went to an open house Saturday at one of the places I work. It was called “Palooza Internacional” and it was even more remarkable than that name might suggest. I wish I’d gotten more info, but they had “rescued” birds there, and this was one of several. It’s a Moluccan or Salmon-crested cockatoo (Cacatua moluccensis) appropriately named “Mango.” He (pretty sure he was a he) was engaging and personable and had a distinctly easygoing and relaxed. No one could be anxious with this guy pacing back and forth across their shoulders. He was so obviously trusting, so completely accepting it automatically made you feel better about the world. If you get an opportunity to have a bird like Mango perch on your shoulders for a little while, I encourage you to take it. I felt good already, but I felt even better when Mango was there.

I didn’t take any pictures of the man performing magic there, but I wish I had. If you have the opportunity to see him live – or even on youtube – check him out. His name is Alain Nu and he just refers to himself as “the man who knows.” Take a look at his web site: Alain Nu: The Man Who Knows . I am one of the world’s great skeptics. But I sure couldn’t figure out how he did some of the tricks he did.

Back to the “Birdbrain” part of this blog post. The chickadees on our street might do that (perch on my arm) after a lot of effort, though I’ve not yet been fortunate enough to have it happen. A wren has perched on the steering wheel of my car (I took its picture) but not on my shoulders. Hawks on our street, zero percent chance. This one was directly across from our house Tuesday morning at around 10:00. Probably looking for a little early Halloween treat scurrying around down there in the ivy:

A moment later it hopped up on our neighbor’s car and took in the view from up there: 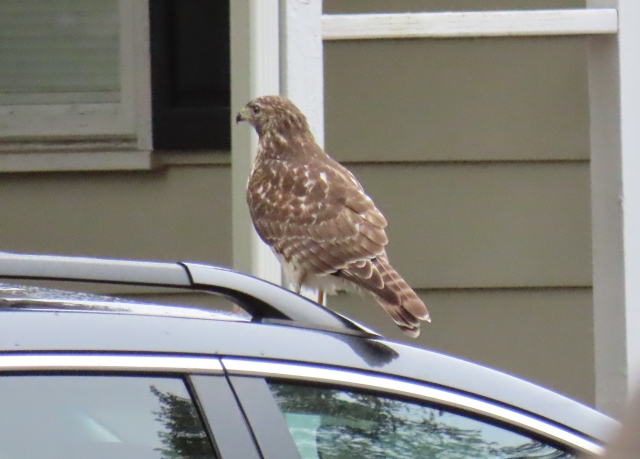 I think it was just feeling the breeze when it got up there. It stayed for less than a minute:

That car roof was no place for a hawk:

Next month, incredibly, will mark seven years since my dad died. I don’t think of dad often, but if I’m a hundred years old and see a bluebird perched in a dogwood tree, dad will be the first thought that comes to mind. I didn’t move from photographing that hawk to photograph this bluebird. Just zoomed back and focused in our front yard. Dad’s favorite bird perched in Dad’s favorite tree: 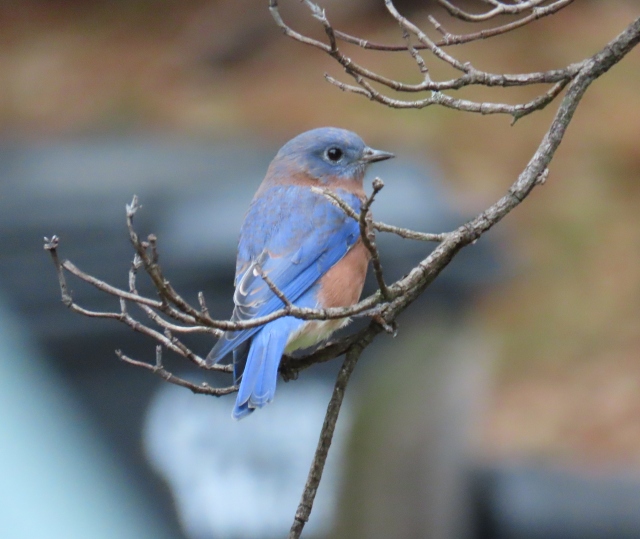 The moon will be “new” (100% invisible) tonight at 11:40. Which means it’s invisible now, no matter how clear the sky is, and it’ll be invisible tomorrow too. But I took this first picture at 6:48 Wednesday morning when it was 29% full and slowly shrinking (waning):

I took this picture not quite two hours later. It was 28% full and a bit higher above the horizon:

I’ve had a lot of fun this week even by my standards, and that’s saying something. I don’t ride horses, but I like spending time with them, and I had an opportunity to help some folks out this weekend. So I got to spend a couple hours out in Powhatan at a great place called Mesa Vista Farm. On their website (see for yourself) it says “We warmly welcome traditional and therapeutic riders to our beautiful farm!” I am neither a traditional or a therapeutic rider – unless you count bicycles – but they welcomed me to their beautiful farm just the same, and I am grateful for the opportunity. This is their enormous beautiful indoor ring. See the horse/rider/side walker teams over there on the left? I was the side walker for a few of the kids. About half were verbal. I was a side walker for a young semi-verbal guy who was riding that the smaller white horse closest to the wall on the left. His name was “Cloud” and the rider and I were looking out the windows at the clouds outside and comparing them to the horse’s color:

Horseback riding at Mesa Vista Farm today. “Cloud” is the white horse closest to the wall.

There were fifty (or more) stalls lining the sides of the arena. They’d let anybody in those stalls! 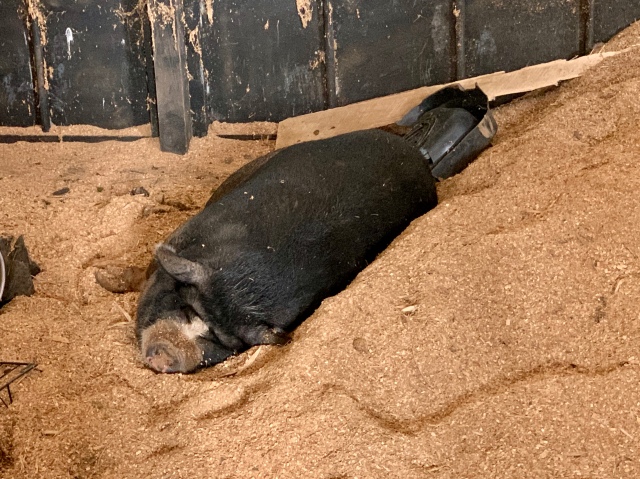 Happy as a pig in… sawdust

These donkeys could have walked right under some horses. It was like comparing Dash to Mackey

This guy could have even walked under the donkeys – but you could hear him wherever you went:

It was a fun, fun, fun place to be. I need to get to sleep! But – of course – before I go. Recall if you will that Friday will be November 1! I photographed this rose and this hibiscus in our backyard at noon today: 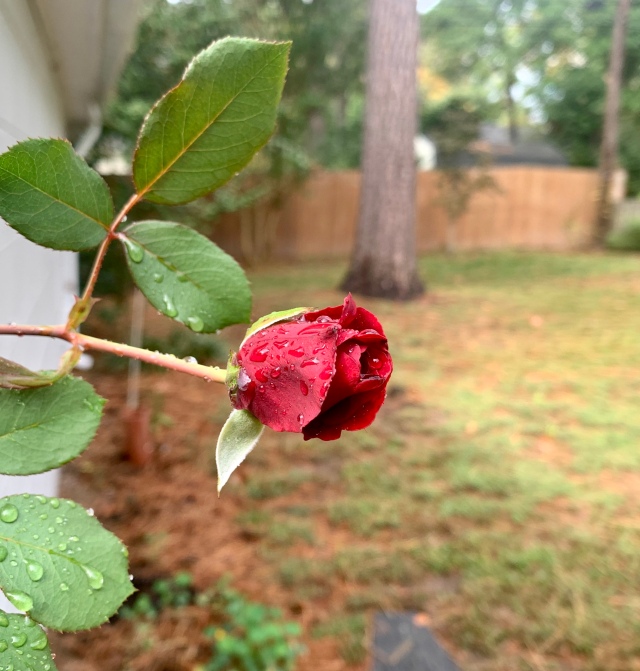 Have an excellent weekend! Come back next week! All best,

I am a rehabilitation counselor. I have many friends with autism and traumatic brain injuries. They help me learn new things constantly. I hike with dogs at the James River in Richmond - a lot. I've completed an Iron distance triathlon a year for 11 years. My most recent was in Wilmington, NC in November, 2013. I currently compete in mid-distance triathlons. And work and hike and take pictures and write and eat.
View all posts by Jay McLaughlin →
This entry was posted in Birds, disability, Dogs, dogwood, Flowers, Fun, love, moon, People, raptors, Red-tailed hawks, Rivers, simplify, Smiles (including "dog smiles"!) and tagged Autism, bluebird, clouds, disability, Dogs, Endurance, Flowers, Fun, nature, outdoors, People, pictures of the moon, Red-tailed hawks, smile, Smiles - human AND dog smiles!, tbi, transportation, traumatic brain injury. Bookmark the permalink.