Shortcut at the finish line 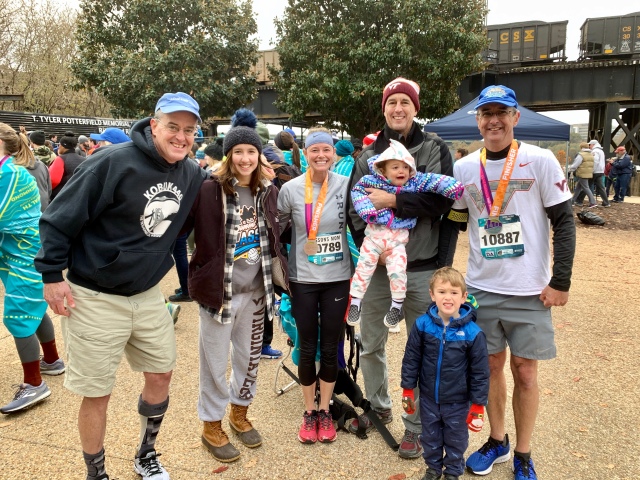 The two people with medals just ran 13 miles! In UNDER two hours!

The two people wearing medals in this picture are my brother Shane’s wife Kristin and my brother Kevin. The picture was taken a few minutes after Kristin and Kevin both finished the Richmond Half Marathon in under two hours!

Also shown are my brother Shane, my nieces Phoebe and Teagan, my nephew Wesson and me. A kind stranger took this picture; I wish I’d asked his first name. It’s always nice to meet a new person. The two youngest folks in this picture were feeling the cold a little more than we were but they were troopers. And they recovered quick!

Also note the CSX coal train heading east behind us. If we’d all looked to our left, we could see the spot where my friend Clark and I look for trains nearly every week. Clark and I were down there Wednesday afternoon around 1:30. This locomotive, CSX #3082, a GE ES44AC, was pulling an identical train in the same direction, three days earlier:

So the top picture (family) has the river just a couple hundred yards behind all of us. The second picture (locomotive on tracks) is even closer to the river. Those pictures were close to the river downtown, but Mackey and Turner and Yuki and I were out on the river this morning at 9:00:

There is no place I would rather be on a Sunday morning.

It’s funny – now – but it was way colder at Brown’s Island yesterday after the race than it was right on the water this morning. Mainly because of the wind – it was whipping across the river and the island yesterday and gusting around the buildings downtown and it was real hard to stay warm. But this morning at the river out there on those rocks it was real still, and the cold wasn’t awful. The river in that picture was 4.07’ deep, a tolerable and enjoyable level.

I never saw the white squirrel this week, but I saw plenty of gray squirrels, both at Deep Run and here. And at Pony Pasture. This one is from Deep Run. I named the file (so I could find it) “1sq.jpg.” Which called to mind my mother and father (mostly my mother) and the way they and their dogs would act around squirrels. Mom and Dad had bird feeders on their back deck, and a picture window looking out on it. I don’t know who got more excited about squirrels – my mother and father (mostly my mother) or their dogs. But when a squirrel would come up on the deck, their dogs would get very, very excited. So would mom and dad – especially guess who. And mom would say – for years – in an exaggerated stage whisper “Mike – an SQ!” On the theory that if you pronounced the entire word, the dog would do something impulsive and unpredictable, possibly even crash through the picture window in an attempt to capture the squirrel. The “SQ.” I didn’t even have Mackey and Turner with me when I spotted this one:

I got a handful of birds this week, but nothing I was thrilled with. This Red-shouldered hawk was glowing nicely in the morning sun Wednesday at around 8:00:

Red-shouldered hawk warming up in the cold morning sun

I get up at 5:00 Wednesday mornings and eat and go to work then work until 9:00 AM. I go from there to the pool and swim for a little over half an hour. I come home and have something to eat then go back to work for a few more hours. This time of year the woodstove is burning 24/7 and by 7:00 PM I am about done. I lay down in front of the fire and Ev took this picture. I’m not sure where Turner is. When you’re tired, anyplace is comfortable:

I need to write about this book, I recently finished it and it was a pleasure from start to finish. Arthur C Brooks was even handed and non-partisan in a manner that has become  very difficult (at least for me) to find lately. Here’s a link to the goodreads (not Amazon) page for Love Your Enemies: How Decent People Can Save America from the Culture of Contempt by Arthur C. Brooks. It’s a refreshing read. Here’s the cover:

Love Your Enemies – How Decent People Can Save America from the Culture of Contempt – Arthur C. Brooks, 2019

Shane and Kristin were not our enemies before, and I hope they’re still not. But Evelyn and I (it was Evelyn’s idea) gave Wesson this priceless gift Saturday. It obviously (to the unaided eye) didn’t have any moving parts or wires or lights or batteries, so Wesson wasn’t quite certain what it was. I reassured him – I said “this is going to change your life.” Unless they hid it from him and hoped he forgot about it, Kristin and Shane may be questioning our taste in gifts for four year old boys. But you just can’t improve on this. This is in the picture dictionary next to “timeless classic”:

Evelyn’s thoughtful gift for Wesson. They just grow up too fast, don’t they? SMH

I just got to the end of this and read my notes and forgot – until this very moment – why I titled this “Shortcut at the finish line.” Hanging around the finish line of a big race like that is a shortcut to feeling great – you just can’t help it. You totally don’t have to run the race, although you get a lot bigger dose if you train for it. But everything at the finish line is triumph – you just can’t avoid it. There was a full marathon (26.2 miles) plus a half marathon plus an 8k (about five miles) all the same day. Well over ten thousand total finishers. Plus add their families and friends who come to see them finish. Every single person is happy. There’s pain and there’s tiredness and there’s blisters and shivering and hunger and thirst and all that but there’s undiluted triumph – it’s everywhere, it’s unavoidable – and it gets in the air and you can’t avoid it. It goes away. The race ends. But that joyful borderline ecstasy is real, real difficult to find for free anywhere, but it’s there. At the finish line. Check it out! And come back next week!

I am a rehabilitation counselor. I have many friends with autism and traumatic brain injuries. They help me learn new things constantly. I hike with dogs at the James River in Richmond - a lot. I've completed an Iron distance triathlon a year for 11 years. My most recent was in Wilmington, NC in November, 2013. I currently compete in mid-distance triathlons. And work and hike and take pictures and write and eat.
View all posts by Jay McLaughlin →
This entry was posted in Birds, Dogs, Endurance, Fun, James River, love, People, Pony Pasture, raptors, red-shouldered hawks, richmond marathon, Rivers, simplify, Smiles (including "dog smiles"!), squirrels, Trains and tagged Dogs, Endurance, Fun, james river, nature, outdoors, People, Pony Pasture, red-shouldered hawks, Rivers, smile, Smiles - human AND dog smiles!, transportation. Bookmark the permalink.

4 Responses to Shortcut at the finish line