Posted on December 1, 2019 by Jay McLaughlin 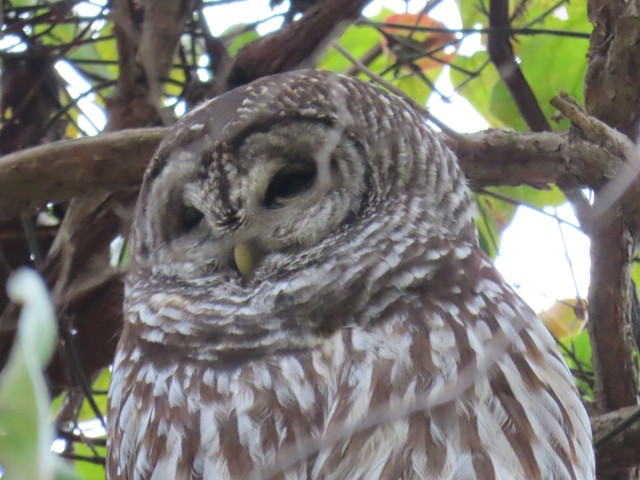 Pony Pasture Barred Owl yesterday. Thank you for the tip!

My friends and their dog were walking out of the woods yesterday just as Mackey and Turner and I were walking into the woods. M and T and I were headed for the riverbank, but my friends told me they’d seen an owl not long ago in a tree above the trail. They gave me detailed instructions and I walked back and looked up and there it was! I smiled when I saw it. If someone at Kroger was telling me where to find the cinnamon (for example) and said “halfway up aisle 7 at shoulder height” I’d forget practically before I even turned around. But the directions to this owl were arcane and complex and involved a lot of “turn when you see the big sycamore” and “where the trail goes around a really wide puddle” and “remember where that raccoon used to live in the hollow tree?” and “look up to your right for a bunch of ivy” – and on and on like that. And I found it as easily as I could find my own house. Sometimes I think my memory is slipping, when the truth is I’m just choosing to not pay attention. Oops.

I had the rare privilege of walking dogs twice at Pony Pasture yesterday (Saturday). The forecast for today was sloppy so I got them out yesterday. I got my old friends Lola and Luna out on the rocks at Pony Pasture around 10:15: 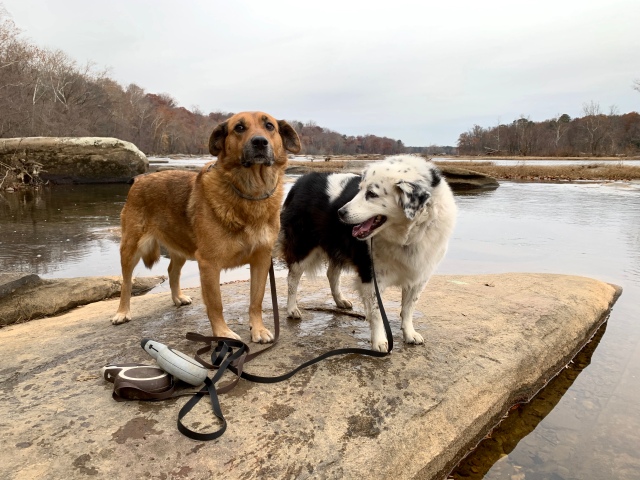 Lola (left) and Luna at the river yesterday morning:

The river was 4.3 feet deep yesterday, that is a very, very nice depth. Mackey and Turner and I returned at 1:30: 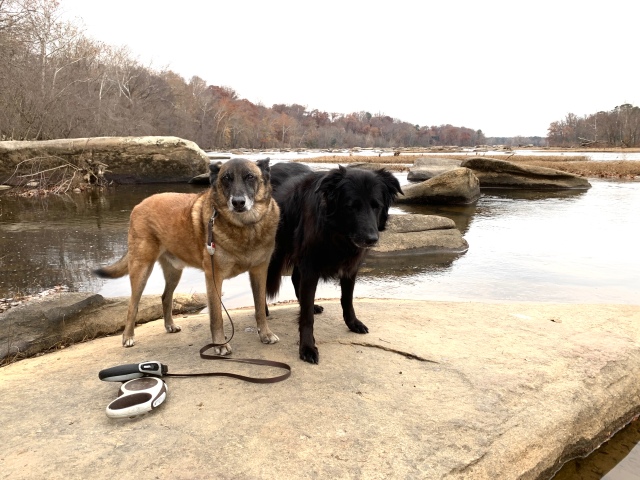 Our buddy Yuki is on a holiday (and beyond) road trip and may not return until Spring. We’ll miss him! Fortunately the river will continue to do what rivers do. It’s flowing now and it’ll keep flowing until Yuki returns, and beyond.

I photographed two Red-shouldered Hawks Monday morning, but unfortunately neither image was wonderful. But, in the interest of “not letting the perfect be the enemy of the good,” here’s one that came out okay. Maybe next week will be better (or not), but this is pretty: 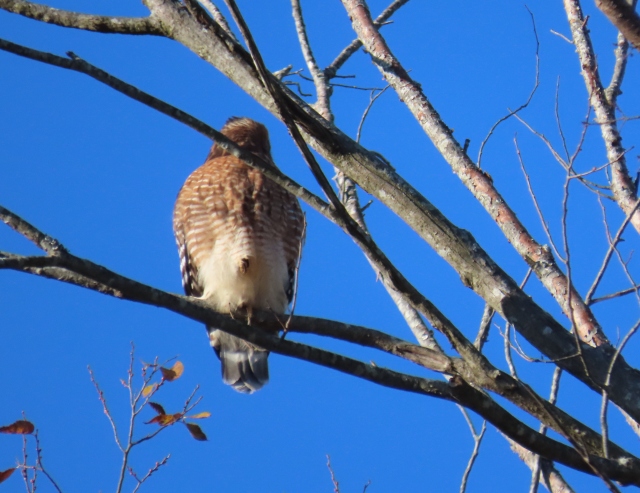 I caught a glimpse or two of the white squirrel earlier this week. I’ll stop photographing it sooner or later. But here’s one from Monday. I like the backlighting on the tail: 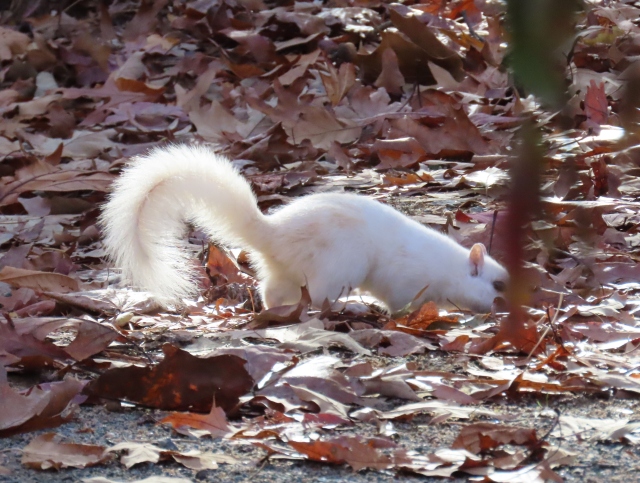 White squirrel with the sun behind it

We are seeing many pairs of bluebirds on our feeders currently. This one was out in the rain earlier this afternoon. Their colors aren’t bright in December, and the light is poor, and it’s wet, but I believe this is a male: 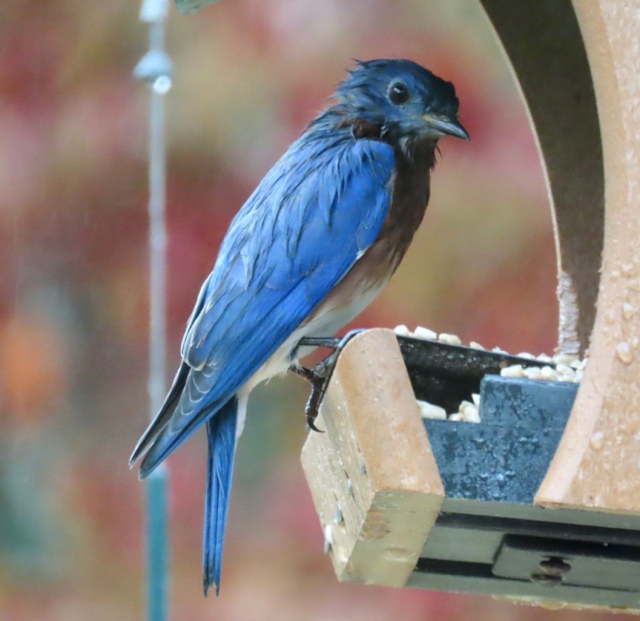 The opposite of lying in front of the fire:

I’m not loaded with pictures (or energy) today so I’m going to close up with a picture of Dash. His head was about four feet from the woodstove. The thermometer on top of the woodstove – not making this up – said ~650ºF. You never see Dash move. Here’s the thermometer: 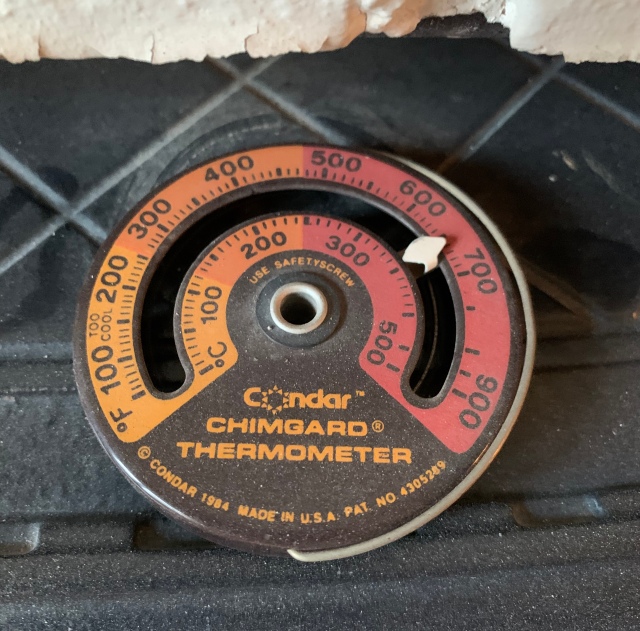 This temperature keeps Dash at about 4.5′ away:

But when the stove gets down to ~300º (usually just before I wake up in the morning) Dash is practically lying underneath it. It’s occurred to me that his distance from the stove correlates precisely with the temperature. It’s unusual for it to go higher than 700º but if it does, he’s real far away. He stays in the living room – the stove is a cat magnet – but far away. Stove at ~650º, Dash roughly 4.5 feet away: 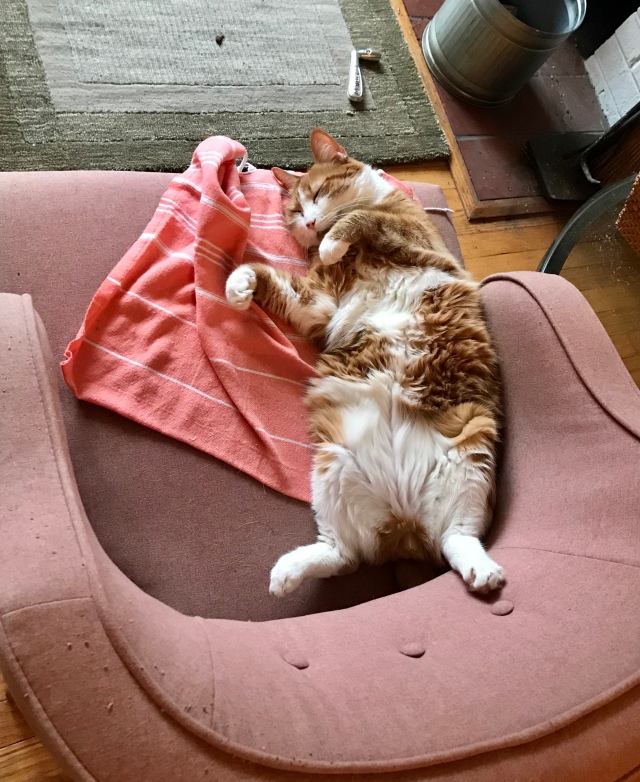 Have you ever? This cat does not know the meaning of the word “shame.”

Dash always looks like he’s just had a big Thanksgiving meal! I hope yours was great!

I am a rehabilitation counselor. I have many friends with autism and traumatic brain injuries. They help me learn new things constantly. I hike with dogs at the James River in Richmond - a lot. I've completed an Iron distance triathlon a year for 11 years. My most recent was in Wilmington, NC in November, 2013. I currently compete in mid-distance triathlons. And work and hike and take pictures and write and eat.
View all posts by Jay McLaughlin →
This entry was posted in Birds, Dogs, Fun, James River, love, Pony Pasture, raptors, red-shouldered hawks, Rivers, simplify, Smiles (including "dog smiles"!), squirrels and tagged bluebird, cats, Dogs, Fun, james river, nature, outdoors, People, Pony Pasture, red-shouldered hawks, Rivers, smile, Smiles - human AND dog smiles!. Bookmark the permalink.