Owls travel a quarter of the way around the sun

I’m open to people’s interpretations for why this might have happened. This week I observed a natural phenomenon and I find it nearly inexplicable. I photographed Barred Owls at Pony Pasture this week – for the thirteenth consecutive week! I’ll revisit that topic a  sentence or two further into this blog post.

But first here’s a male cardinal warming up in the sun this week, puffed up against the cold. I didn’t see a female nearby but she couldn’t have been far away:

Two out of three primary colors 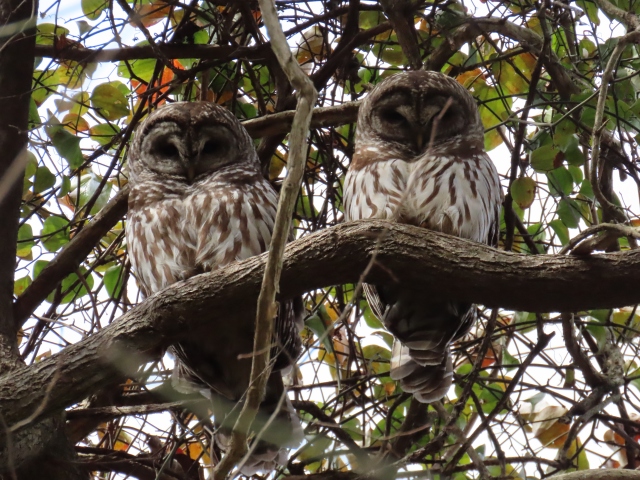 The reason it’s significant – to me – is because, as I’ve noted incessantly, of the length of time I’ve been seeing these owls. “Thirteen weeks” is not a random number of weeks – it’s a quarter of a year. Earth takes fifty-two weeks to make a complete trip around the sun – one year. Those owls – one or both – have been sitting on the same branch – for a quarter of the year! I just cannot think of any other animal that behaves that way. A quarter of a year on one branch. I cannot figure out how evolution would select for that behavior. So if anyone can suggest why a bird like that might perch on the same branch for a quarter of a year, I’m interested to hear it.

You can certainly see a robin fifty two weeks a year. But the ratio of robins : Barred owls in central Virginia is probably in the vicinity of 10,000 : 1 or something like that. Here’s one of ten thousand (-ish):

When I was much younger these were a sign of Spring. Now they’re always around!

I believe robins are the most common bird in North America.

I also got a squirrel at the park one day this week. I don’t love this picture but I don’t have a ton of content this week so oh well. Smile:

Here’s some great content – the two best boys in the world, Mackey and Turner this morning at Pony Pasture at 10:43, urging me to stop taking pictures and start hiking:

Mackey and Turner don’t like to stop. Except sometimes on the river.

I am a rehabilitation counselor. I have many friends with autism and traumatic brain injuries. They help me learn new things constantly. I hike with dogs at the James River in Richmond - a lot. I've completed an Iron distance triathlon a year for 11 years. My most recent was in Wilmington, NC in November, 2013. I currently compete in mid-distance triathlons. And work and hike and take pictures and write and eat.
View all posts by Jay McLaughlin →
This entry was posted in Barred Owls, Birds, cardinals, Dogs, Fun, James River, love, Pony Pasture, Rivers, robin, simplify, Smiles (including "dog smiles"!), squirrels and tagged barred owl, Dogs, Fun, james river, nature, outdoors, Pony Pasture, Rivers, smile, Smiles - human AND dog smiles!. Bookmark the permalink.