I read the New York Times way too much and it’s nearly impossible to look at it – at any section – without some mention of the Coronavirus, a.k.a. “COVID-19.” So I spent a ton of time hiking with Mackey and Turner this morning, and photographing owls, redbuds, dogs, the river, sycamore trees, Red-winged blackbirds, ospreys, crows, cardinals, goldfinches  – all 100% uninterested (as far as I could tell) in it. Uninterested in social distancing, in schools closing, hand-washing, coughing into their elbows, face masks, pandemics, all of it. Toilet paper, hand sanitizer, bottled water, interest rates, professional sports, advertising revenue – the list of what they don’t care about is enviably long. Meals and mates, that’s what “m&m” means to most birds in early Spring. Mackey and Turner and I doubled the length of our hike this morning because I was so reluctant to leave the sanctuary of the riverbank.

So I thought I’d open up with one of Evelyn’s camellias: 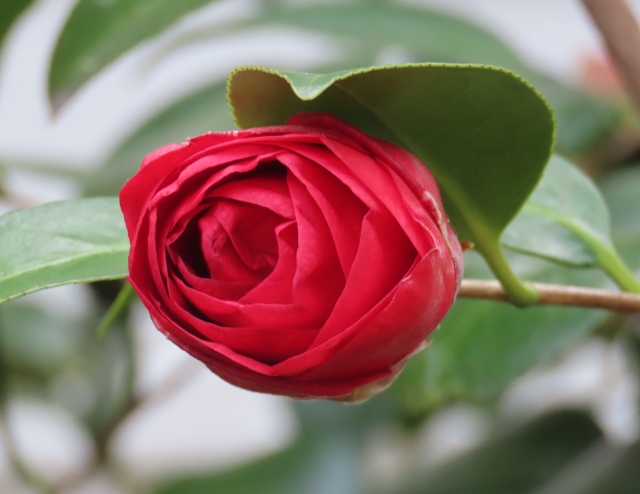 Camellias almost seem sheepish – they don’t show off. They should!

And of course an owl from today – the sixteenth consecutive week: 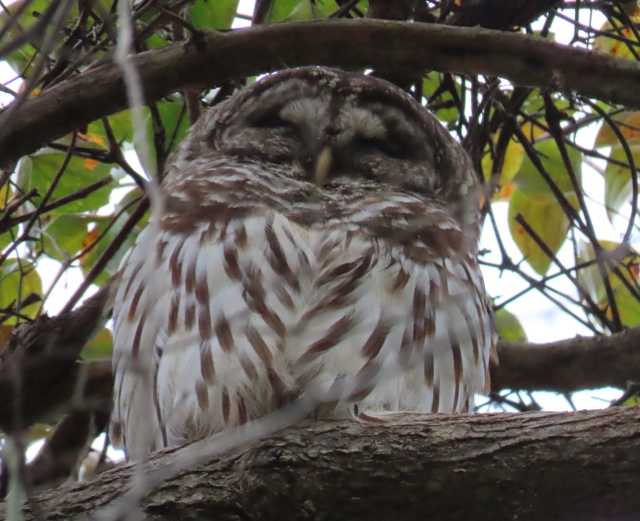 16 weeks of Barred Owls – I feel so fortunate! And grateful!

“Musical blog post titles” is because I’ve gone through a lot of possible titles this week. And when I went to the river Tuesday – no owl! So I started making up owl free blog post titles. Plus many more as the week wore on, but I was happy to see an owl again. Maybe that’ll end the streak. Come back next week and find out!

Meanwhile – speaking of things that made me happy today and got me out of the little funk I’d gotten into – I saw my first redbud of 2020 at Pony Pasture this morning at around 10:30. Redbuds are always a sure sign of Spring:

Spring and Fall (Autumn) begin on the two “equinoxes”, or days in the year that have twelve hours of dark and twelve hours of light. In Spring (begins this week) the days have been getting longer and will continue to get longer until the June solstice on June 20. The Spring and Fall equinoxes mark the beginning of each of those seasons. The June solstice and the December solstice mark the beginning of Summer and Winter respectively. So these redbuds (and a few other flowers) are the first to show up each year. The early birds are nesting, and raptors are the most visible. They begin before songbirds.

The light wasn’t brilliant and neither was the angle but I got an incredibly lucky picture on the way home from the river early this afternoon. I’ve been following an osprey nest near Stony Point Fashion Park for a couple of years now. They disappear (headed for Florida and points south) in late August or early September. But they show back up at the same nesting site almost on cue about six months later. I don’t know for a fact that these are the same ospreys, but I do know for a fact there are ospreys on the same tower every Spring. Anyway, check this out:

Ospreys mating at a nest site that hardly merits the name:

That is a pair of ospreys mating – unbelievable that happened while I was standing there pointing my camera at them. I think ospreys mate a whole, whole lot of times early in the season. And look at their nest. It has like seven sticks in it or something.

If one of those ospreys flew north along that powerline for three miles they could land in this nest – but this is a different pair of ospreys. Same powerline, different ospreys, three miles north. Sorry about the focus – my mistake:

I was at the river Thursday (still hoping to see an owl, but still unsuccessful at that point) when I saw a signature early Spring Pony Pasture native plant, the Virginia Bluebell. Next week they’ll be going crazy. But at the moment they’re about as developed as that first osprey nest:

Virginia Bluebells beginning to peek out at Pony Pasture

Here’s a sight I don’t normally see. When the dogs and I finish up our evening walk, this parking lot is normally empty. But with school closing for two weeks, Henrico County Public Schools is parking a whole row of buses across the street from our house for the duration of the Coronavirus/COVID-19 break:

No one anticipated buses would be stalled by coronavirus

In fare that’s more consistent with my blog content, here’s a mockingbird on a sign at Strange’s Florist when I visited Tuesday looking (it’s too early) for gardenias:

I don’t get tired of mockingbirds

I saw this squirrel at Deep Run three hours later:

I’ll close with a picture of my handsome boys resting at the end of our long walk today. They don’t like to sit around the house any more than I do though – I don’t think they were in a hurry to get home. They’re both sleeping like logs as I type this though:

End of the hike – they don’t move around as much