Poor photography backs me into a corner

I didn’t get great pictures this week (IMO), so I backed myself into a corner and actually had to write something to make this a good blog post! It is so much easier to just photograph an  owl or a deer or a hummingbird! Roses! Goldfinches! Ospreys! There are so many things to photograph – writing takes work!

But I’m not working a ton due to COVID and the pool (the Y) is also closed due to COVID. So in the last eighteen days I’ve gone for fifteen bike rides and it’s given me lots of time to think. I wrote a little at the bottom of this post.

Virginia Spiderwort (Tradescantia virginiana) is blooming at Pony Pasture right now. Mostly out of the mud at the moment; the river reached almost fifteen feet deep earlier this week. It was only about eight feet deep this morning but the park is real, real muddy. I took this picture Tuesday at 10:17:

We looped around and came back up the trail. This was a little over an hour later, not real far from where the spiderwort was. See the bench? The river was ~13.7’ deep at that time, rising toward its crest at 14.7’ that evening: 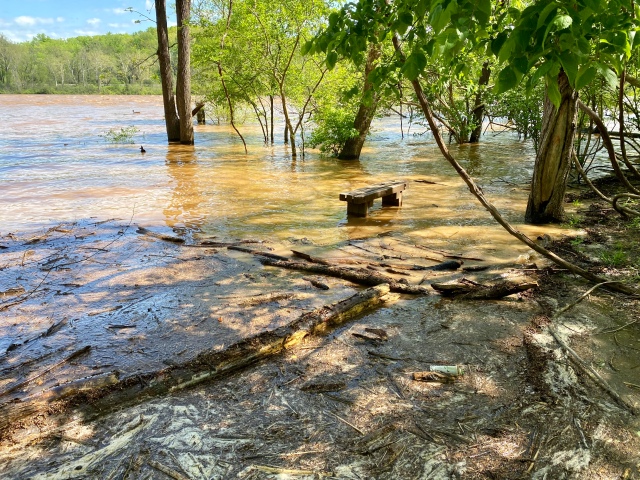 Pony Pasture Tuesday. See the bench on the right?

Ev’s gardenias are still (even as I type this paragraph) blooming and perfuming our home.  I took this picture Monday at lunch time:

Dash is enviably unconcerned about it all. Gardenias, COVID-19, flooding rivers, electoral politics, it’s all the same to him. Does every picture of Dash look the same? Sort of:

Wave your paws in the air like you don’t care

Squirrel from Deep Run this week:

Maybe next week I’ll get better pictures. You never know! This week you’re stuck with a memory that’s stayed with me for twenty-five years. Have a great week! Come back next week!

I struggled intermittently for years after my accident. Never physically. I accepted my physical limitations (such as they were) early. But emotionally the changes were difficult to accept, so I saw a therapist. This story is not about therapy though. It’s about a bilingual professor with a port wine birthmark on his face.

I’ve kept Dr. S anonymous in this blog post. But obviously if you had a Spanish professor in the 1990’s with a port wine birthmark on his face, you know who I’m talking about.

I learned long ago he died. I didn’t learn until I began researching this blog post that he was only 56 years old. Two years younger than I am as I type these words. And he had a ten month old granddaughter! And he died nearly twenty years ago, which also came as a shock, since he taught me during my second (my post-accident) undergrad career. Amazing that amount of time has passed.

Here is the cover of the journal where I wrote about him: 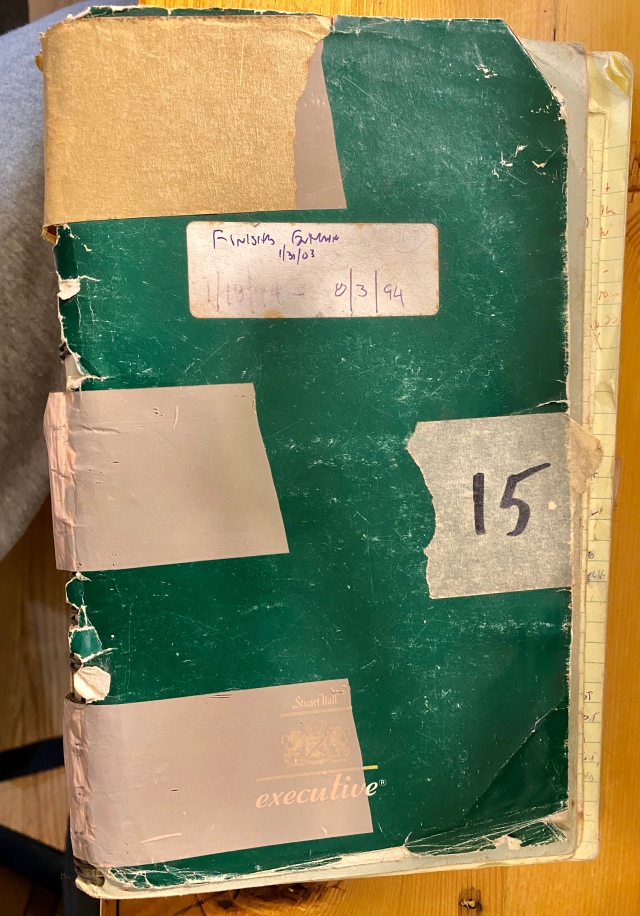 “PD” was my therapist. I “graded” each of our sessions as soon as I went out to the car afterward.

Here’s the first mention of Dr. S in my journal:

I guess a B. we began talking about my excellent swim this weekend plus SPA and thus two subjects occupied most of the time except when she brought up late a little about the fee increase and about vacation. I also talked some about Dr. S  and his port-wine birthmark and how it may have affected him developmentally and she thought it was interesting that I thought that much about it.]]

His name is searchable; I found it in my online journal right away. Here is the second mention of Dr. S. Including why it moved me so much, and still moves me over a quarter of a century (!) later:

It could have been, but maybe not, maybe I’m just in a good mood because […] I had all real coffee on my break, but today was good. We talked about my competitiveness or non competitiveness, about reading about her, about UVA and W&M and Gonzaga, about I don’t know what all. Today at PD’s we also talked about another little situation. It came to me sometime that Dr. S appears totally Anglo, yet speaks [Spanish] like a native. [Dr S was born in Cuba to American parents who worked at the State Department].  And plus he has that port wine mark. What an incredible combination, what a person to have met. So I said to him, you must overhear a lot because you look like such an Anglo and you speak so well. He said yes, I do, and I’ve found out that people aren’t usually talking bad about you behind your back like you think they are. What a cool little thing to stumble on. A totally bilingual professor with a port wine stain. Unbelievable.

“All comparisons are invidious.” – Dr. S

If people talked bad behind his back, Dr. S would know. And I’m quoting him directly when he said “I’ve found out that people aren’t usually talking bad about you behind your back like you think they are.”

Think about how often you’re kind. I’m certain it’s not every waking moment. But I’m sure you are most of the time. It’s just too difficult to go through life if you’re not!

I am a rehabilitation counselor. I have many friends with autism and traumatic brain injuries. They help me learn new things constantly. I hike with dogs at the James River in Richmond - a lot. I've completed an Iron distance triathlon a year for 11 years. My most recent was in Wilmington, NC in November, 2013. I currently compete in mid-distance triathlons. And work and hike and take pictures and write and eat.
View all posts by Jay McLaughlin →
This entry was posted in cats, Flowers, Gardenias, James River, love, People, Pony Pasture, Rivers, simplify, Smiles (including "dog smiles"!), squirrels and tagged cats, Endurance, Flowers, Fun, Gardenias, james river, nature, outdoors, Pony Pasture, Rivers, smile, Smiles - human AND dog smiles!. Bookmark the permalink.

2 Responses to Poor photography backs me into a corner