Not your father’s lawnmower

I got a new lawnmower yesterday. It was shocking, although not because it’s an electric lawnmower. I’ll write a little more at the bottom.

I took a little break from blogging; we’ll see how it goes. My last blog post was on May 17 – seven weeks ago! I haven’t gotten a million pictures I love, but I’ll post a handful. As I type these words on Sunday afternoon there’s a Brown thrasher on my suet feeder – not their normal eating mode. And there are a couple of catbirds out there too. Goldfinches, bluebirds, starlings (of course), house sparrows, woodpeckers, house finches, cardinals, a lot of happy birds. I don’t really know if they’re happy but I do know they’re well fed, one of my personal prerequisites for happiness. The chubby-cheeked-chipmunk sprinting back and forth from the ground under my feeders to its hole under my front walk looks happy too by that measure. It may have a partner and/or babies under there that it’s trying to keep happy. Hopefully a hawk won’t swoop down and satisfy its hunger with a plump chipmunk. Nature is red in tooth and claw even when there are no cardinals in the neighborhood.

Here’s a Northern Flicker from my feeder two days after my last blog post:

Flicker on my feeder

And a male Red-bellied woodpecker the same day: 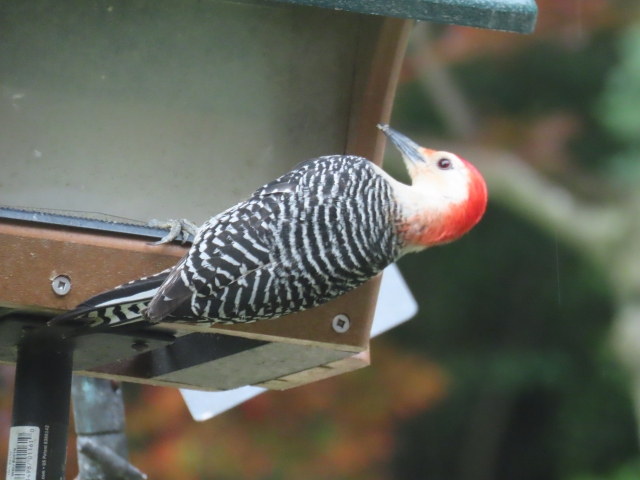 And here (predictably) are Mackey and Turner at the river this morning. Yuki went to the beach for the Fourth of July (not even kidding): 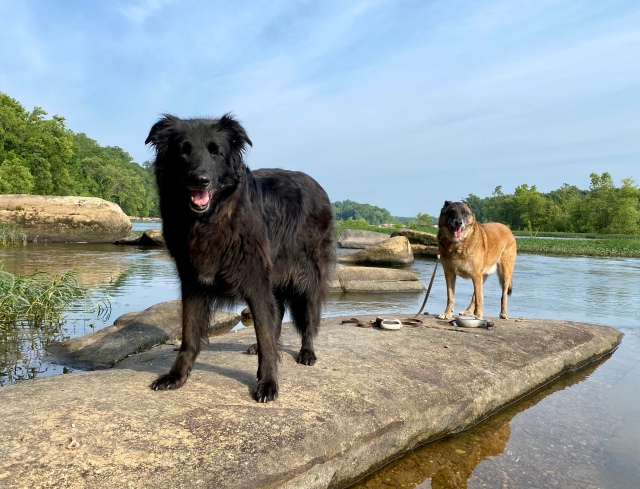 I’m happy a lot, but I’m happiest right in that exact spot

It wouldn’t be a blog post from me if it didn’t have a hawk in it. Here’s a male red-tail from West End Assembly of God Friday:

With most raptors (Red-tailed hawks are a textbook example), the males are approximately a third smaller than the females. They’re identical in every way except size. If you see a pair together, it’s obvious. After a while you can just look and tell. But – interestingly, IMO – since the males are a third smaller, they’re called “tercels.” In this wikipedia entry under the word “falcon,” under “etymology” it says “The traditional term for a male falcon is tercel…” Our mom’s last car was a Toyota Tercel and for a long time I thought that was just a made up word. But it’s a male hawk – excellent choice.

I was driving on Three Chopt Road near University of Richmond a couple weeks ago and there was a deer in someone’s front yard – I pulled over for a picture:

Whitetail deer thoughtfully pruning shrubs near U of R

Back in May – again, just after I took a blogging break – I was reading a book called What It’s Like to Be a Bird by a brilliant author and illustrator named David Allen Sibley. I was reading a chapter about Cardinals – my feeders always have two or three or more pair around – and read this page: 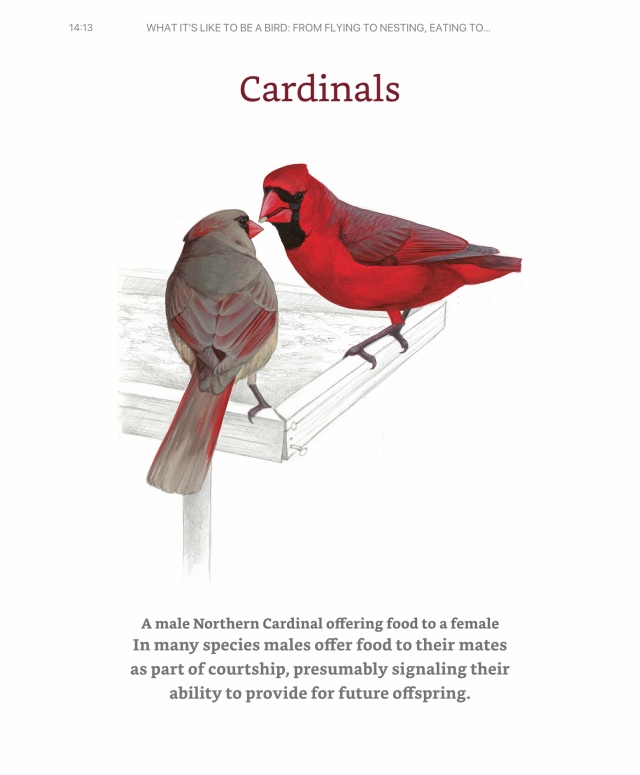 And if I’d been reading that book in, for example, December or January, there would have been cardinals but no courtship. But since it was May and there were cardinals and courtship, I looked out my window and took this picture – 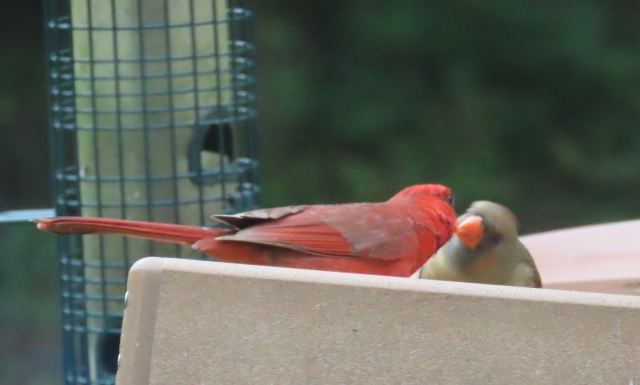 To quote David Sibley, “A male Northern Cardinal offering food to a female.”

This Brown Thrasher was thrashing in my front lawn (they like the back and side lawn as well) in mid-June. I like the brown and green together. And that yellow eye:

Robins are such everyday birds, but sometimes they give you a good look. This is from Bryan Park a couple weeks ago:

Also – sorry this is out of chronological order – here’s a picture I took of a molting cardinal this morning. Every summer, cardinals “molt” – their old feathers gradually fall out and are slowly replaced by new ones. I photographed this molting female cardinal on my feeder just before noon today: 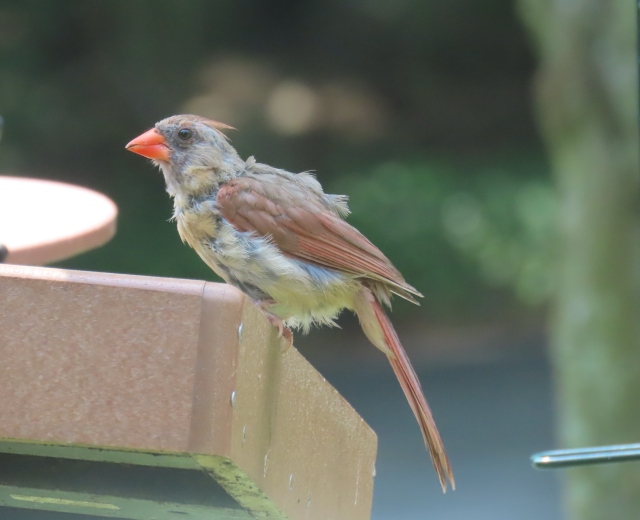 I’ve taken a lot of pictures of Purple Martins this summer but not posted any. I haven’t seen my friend Adolph White this year. He is a natural teacher and knows more about those birds than anyone you’ll ever meet. He also put up and maintains these purple martin houses at Bryan Park. I hope I see him soon! I took this picture earlier  this week. I think they’ll be heading south soon. Along with the ospreys:

Just a handful of the dozens of purple martins at Bryan Park.

As a nod to my dad, since I’m referencing him in this blog post, here’s a picture of his favorite bird. I took this a couple days after my last blog post. They’re brighter in early Spring – their colors are fading a bit now: 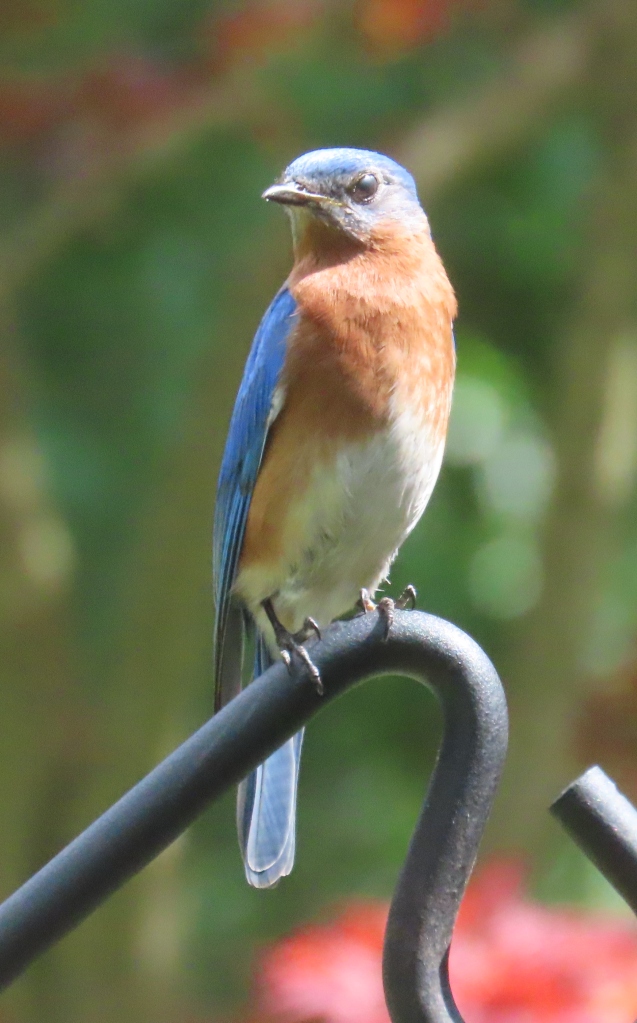 Also – a word of thanks to Evelyn and to my brother Kevin and my friends Pat and Nate and Gilpin – and all the other people who encourage me to write and photograph. And even more thanks to my late mother and father, who always encouraged me to write. When I take pictures of birds or even just watch them out there on the feeder or in the park or flying around the rafters in the mall – it happens – I feel what I’m sure my dad felt. No matter what they’re doing (possibly except for when a hawk is eating a chipmunk), it’s calming to watch.

This is not your father’s lawnmower

My gas lawnmower died (in a  manner of speaking) yesterday when I was about a third of the way finished cutting my front lawn. It wasn’t ancient and it was (is) fixable but now I have a brand new (only been used once, by me, yesterday) battery operated electric lawnmower. I was shocked (I keep using that word) how different it was. It’s not self-propelled but it’s so light you can push it with one finger. And compared to a gas mower it is totally quiet. It’s noise is comparable to a vacuum cleaner, except you’re outside, so it’s not noisy at all.

But what stuck out most for me – what really made it not like my father’s lawnmower – is there was no smell. The smell of gasoline and exhaust has never bothered me – even as a little kid I associated it with fun stuff, like my dad cutting the grass, or when we first started going to self-serve gas stations in the 1970’s and filling up the car ourselves. We were going somewhere, we were doing something, we were active and engaged. The first lawnmower I remember our dad having was a Lawnboy, and all Lawnboys had their own special shade of green, in much the same manner all John Deere equipment has its special shade of green. Except Lawnboy green tended toward the lime green side of the spectrum where John Deere green tends toward the forest green side of the spectrum.

On dad’s mower you had to prime the engine before you started, you had to push a little blue plastic button three or four times before the engine would start. Dad never cursed when the engine wouldn’t start; I have no idea where I picked up that bad habit. The button was blue plastic – it really stood out against the green mower – and dad would let me push the button to prime it. You could really smell that two cycle gas.

So anyway – this is the most unlikely segue you’ll encounter today, or perhaps ever – I was thinking of dad the same way Red Rooster coffee roaster in Floyd, VA was thinking about their customers during COVID – “wish you were here.” Bear with  me – I haven’t written this well. So Red Rooster Coffee is in Floyd, VA and that’s the main coffee I drink at home. So because of COVID all their customers are staying away (fortunately for me they have a good online store) and they came up with a blend called “Drink Floyd”:

Drink Floyd – Wish You Were Here

So it’s a song about loss – it’s complex – and of course I was thinking about dad and cutting the grass. I don’t really miss my dad more than is appropriate – they raised us to experience healthy grieving and move on with our lives, which is what adults do, and what I and my siblings have done. I think when I miss dad now – when I wish he was here – is when I hear the tone of the current “debate” – though it’s really an argument – about COVID, masks, pandemics, leadership, elections, there’s a drumbeat that’s not soothing. But dad always considered both sides. He would have worn a mask everywhere he went – 100% chance – but he wouldn’t have judged people who didn’t. When I’m thinking about my father’s lawnmower, and my father, I don’t think it’s really him I’m wishing was here – I’m wishing his attitude was here. His level- headedness and sanity. You could be agitated when you began a conversation with my dad, but never when you ended one. That’s what I wish was here. In a word, it’s civility. But civility’s not gone for good. It’ll return soon. Civility is an efficient emotion.

Have a great week, all best,

10 Responses to Not your father’s lawnmower