Before I ramble – Happy Birthday Evie! Today (7/19) is Evelyn’s birthday!

In a minute I’ll put pictures of some flowers Evelyn’s growing. They are bright and cheerful and make our already lovely yard even more lovely. But the birds on our feeder planted this one; a stalk popped out of the ground a couple of weeks ago. With the inevitability of the long hours of mid-July sunlight this was glowing underneath the bird feeders Friday morning: 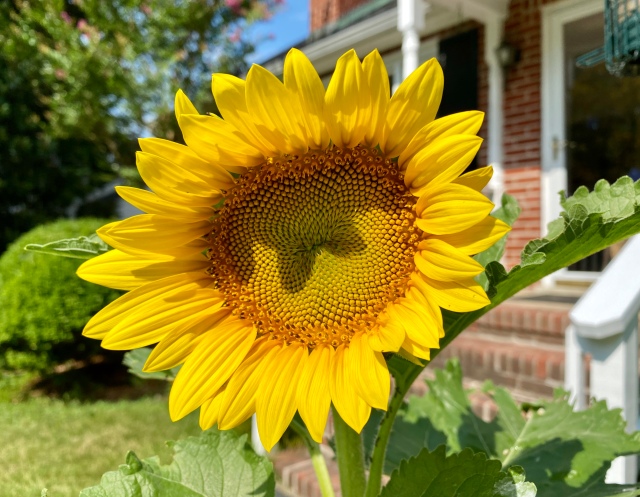 Evelyn’s been working much harder than anyone should work outdoors in this heat. Especially on her birthday! It takes a lot of sweat plus a lot of water out of the hose to keep these flowers happy in weather like this. I took these pictures after Mackey and Turner and I got back from the river around 11:00 this morning. Look how gorgeous they are!: 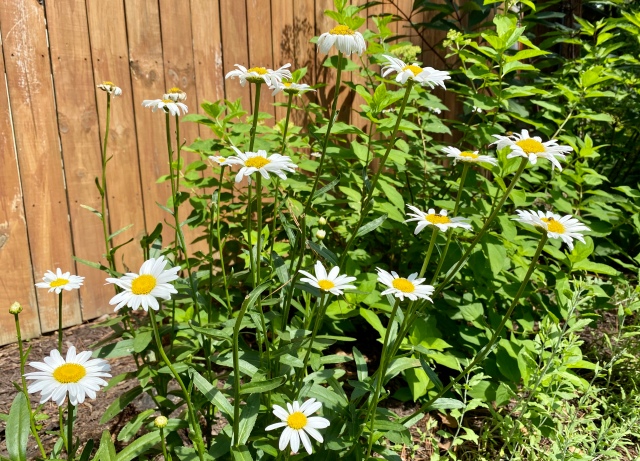 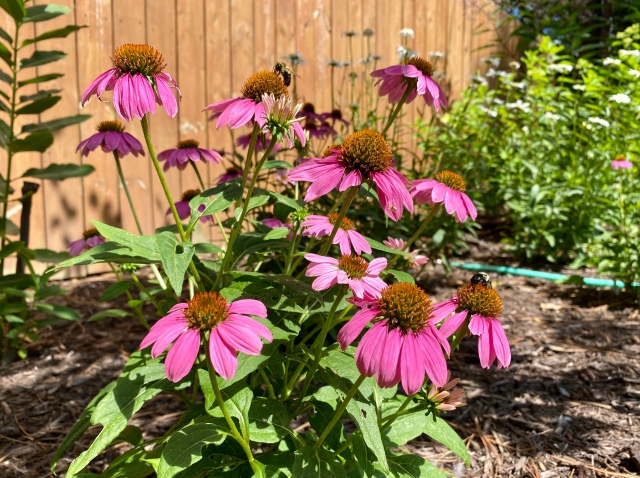 Just to the left of the daisies – more Evelyn inspired cheer in our backyard:

Yuki decided to stay indoors and enjoy the a/c this morning. Mackey and Turner and I enjoyed a little hike with just the three of us. This picture is from 8:50 this morning. It certainly wasn’t cool then, but it was tolerable down on the water: 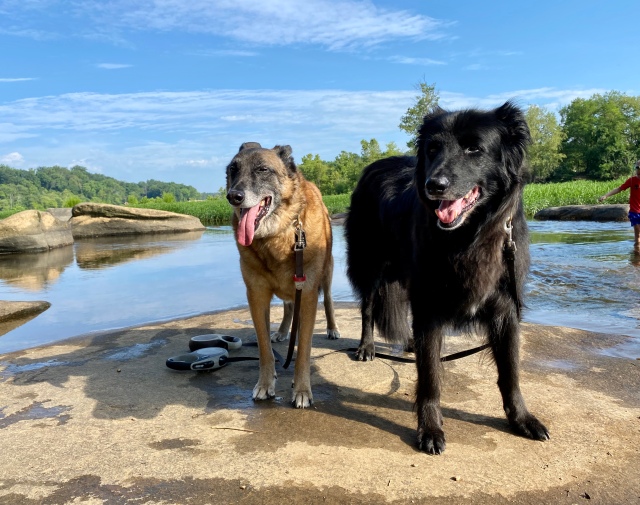 Mackey and Turner make that river look even better!

I was thinking about that sunflower when it opened up, and not thinking that sunflowers – or any flower – are inevitable. But thinking that if you live in the northern hemisphere and it’s July, there will be a little less daylight tomorrow than there was today. Whatever else happens in the world, those patterns are inevitable. As long as the earth turns around its axis and orbits the sun, that will happen – every July. Even though the days are getting shorter, the sun is bright and the days are warm, and at least here in Richmond the conditions are right for spectacular flowers. Speaking of which – here’s another of Evie’s flowers from this week: 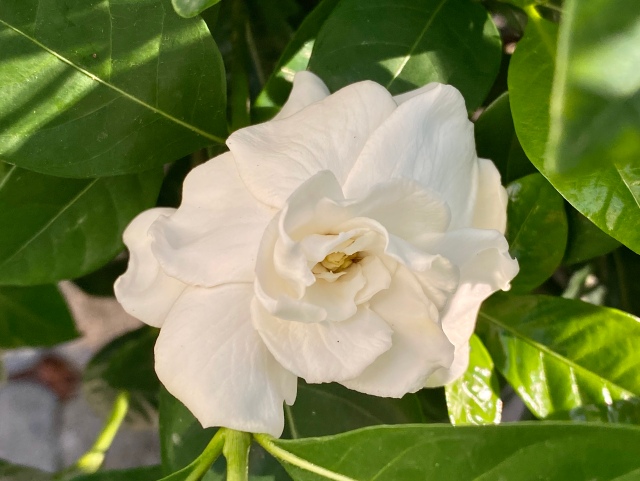 As an aside – I took this picture at 8:12 PM today – I just turned around to pick up my camera from the floor. Turner, Dash and Mackey are always wildly enthusiastic about my blog. Fortunately I have highly developed powers of perception and I can detect their enthusiasm. You’re forgiven if you’re unable to detect it: 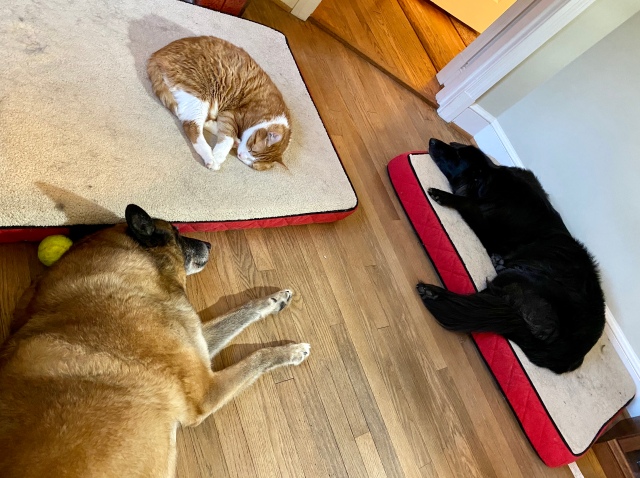 My support crew is hard at work

This next pair of pictures, by the way, is not inevitable – it’s unusual. If you’ve followed this blog you know I spend lots of time watching hawks. Monday morning as I was driving out I looked at the tower across the street and saw not one Red-tailed hawk but a pair of Red-tailed hawks on an electric tower. It is quite rare for me to see two at one time. It almost never happens. 9:22 Monday morning – almost in sight of my house: 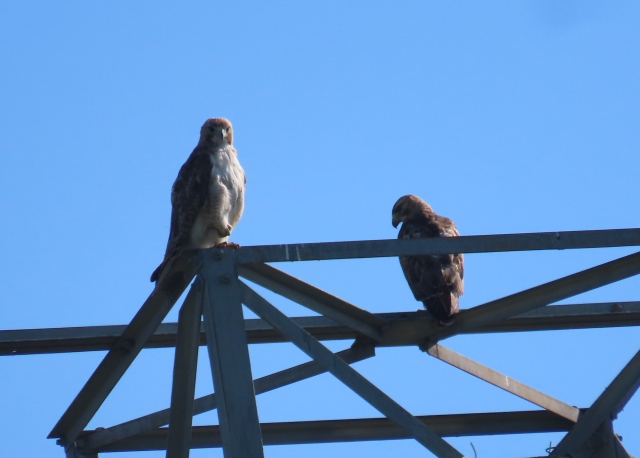 So then I go through my day and work with some clients and go for a bike ride and come home and take a shower and go up to Kroger – and look up on the cell phone tower near the Westbury Apothecary – walking distance from home – and look what I saw up there: 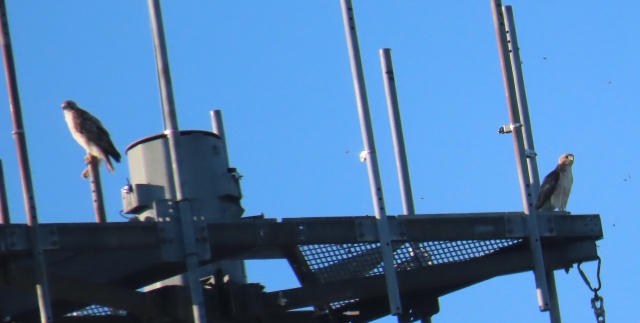 Second pair of Red-tails in the same day!

I almost never see Red-tails in pairs, ever. But Monday I saw two pairs in one day. What a treat!

This butterfly was fun. It was a fun story, I should put it at the end but oh well. Mackey and Turner and I hiked over two miles in just over an hour this morning. We were just getting back near the car – we were at Half Moon Beach if you’re familiar with Pony Pasture. There was a very small, very brown girl maybe (maybe) three years old crouched down talking about – I couldn’t quite understand her at first – a butterfly. I would totally have not seen it – I was looking up at ospreys. When I looked down I saw she was fascinated – how could she not be – with this beauty. I managed a couple of quick pictures. She was with a large group of adults and kids who were clustered around in the shade higher up the riverbank. Twelve people give or take. One guy was their obvious leader – the whole crowd was deferential to him. He was giant. He was my height, a white guy like me, probably a few years younger than me, mirrored sunglasses, enormous beard, giant gut, wearing a tank top, sunburned, covered with tattoos. Three hundred pounds if he was an ounce. This picture was on the little monitor on the back of my camera. I walked up to him and showed him the picture. I said “she just pointed this out – I never would have seen it.” He leaned forward and lowered his mirrored shades and peered at this butterfly. This enormous, tattooed, bearded giant. He looked up at the little girl and said “Look at this picture he took! He never would have seen it if you hadn’t shown him!” He was so joyful it was so, so, so charming. There was 0% chance anybody would ever have described this guy as “cute.” But he was totally, totally cute the way he responded to this. I could not have been more charmed: 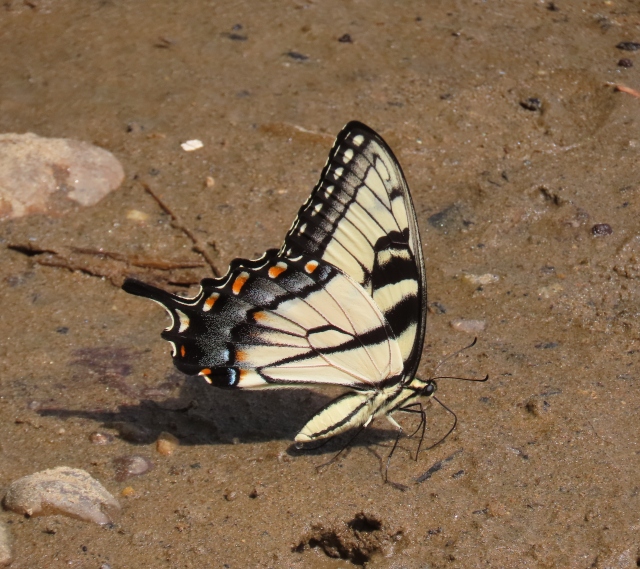 This butterfly brought a whole bunch of people together this morning. What a gift and a treat.

I’ve seen a couple pretty dragonflies this week. I’ve done a lot of bike riding, and this beauty landed on my handlebars just when I finished: 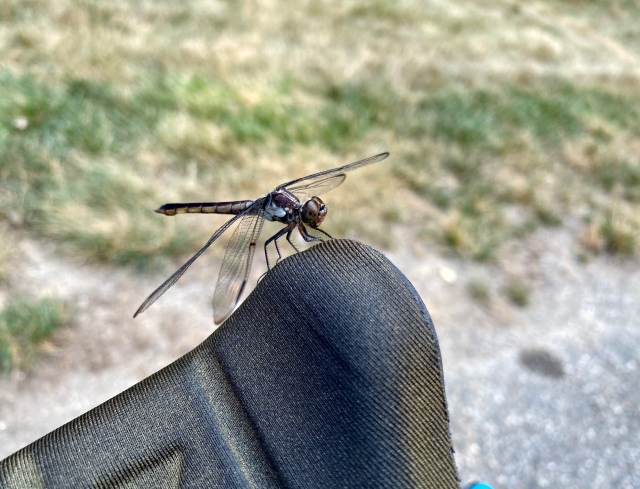 Dragonfly hitching a ride on my bike

I saw this beauty at Deep Run: 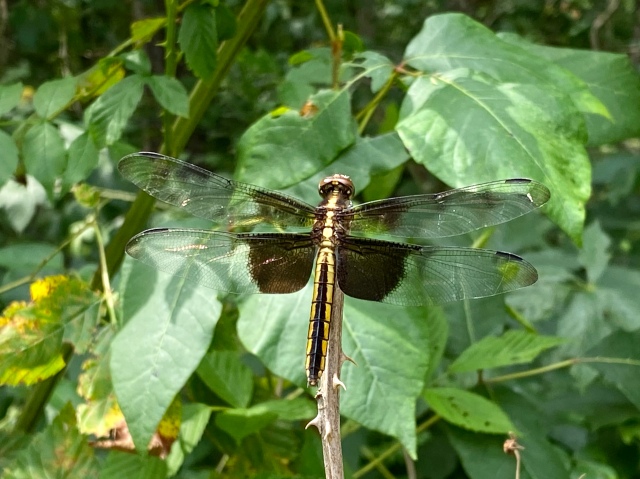 For those of us who enjoy insects, summer is a grand time

My favorite editor and gardener is out celebrating – she has the day off tomorrow! So if there are mistakes this week, it’s all me. One more picture of Evelyn’s handiwork before I sign off. I took this picture Wednesday. Amazing: 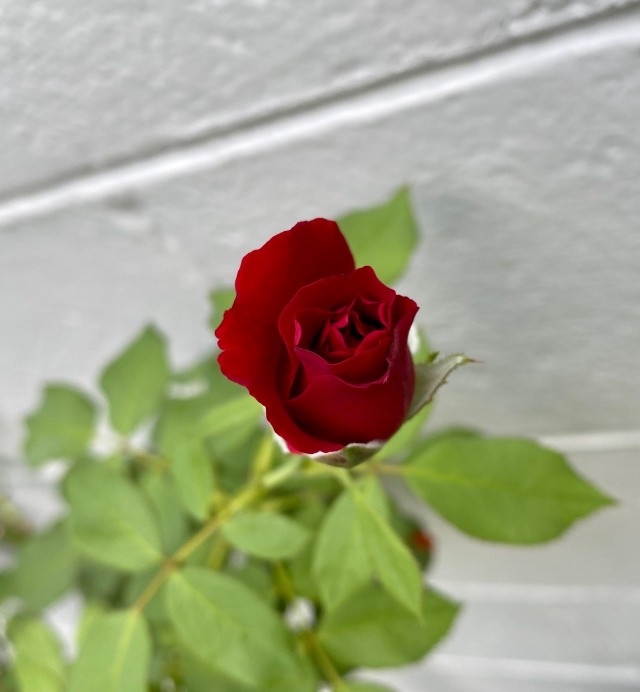 I am a rehabilitation counselor. I have many friends with autism and traumatic brain injuries. They help me learn new things constantly. I hike with dogs at the James River in Richmond - a lot. I've completed an Iron distance triathlon a year for 11 years. My most recent was in Wilmington, NC in November, 2013. I currently compete in mid-distance triathlons. And work and hike and take pictures and write and eat.
View all posts by Jay McLaughlin →
This entry was posted in Birds, Dogs, Flowers, Fun, Gardenias, Insects, James River, love, newfaze, ospreys, People, Pony Pasture, raptors, Red-tailed hawks, Rivers, roses, simplify, Smiles (including "dog smiles"!) and tagged Dogs, Endurance, Flowers, Fun, Gardenias, james river, nature, outdoors, People, Pony Pasture, Red-tailed hawks, Rivers, Roses, smile, Smiles - human AND dog smiles!. Bookmark the permalink.