Lord of the Butterflies 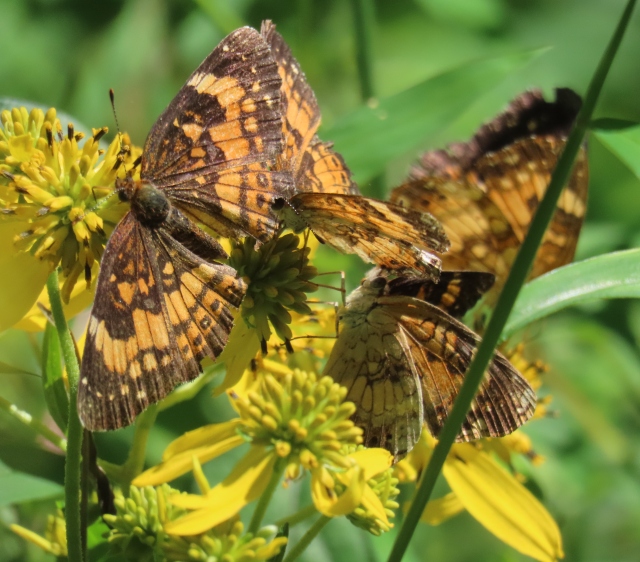 Mackey and Turner and Yuki and I were hiking at Pony Pasture this spectacular Sunday morning when their three long noses simultaneously weathervaned into the unpleasant scent wafting on a puff of breeze from the north. I’m not a dog and I could smell what they were smelling – a lot of decaying animal flesh. It was brushy and I could see over their heads – the decaying body of a large whitetail deer. It had not died of natural causes. I zoomed in with my telephoto lens; hundreds of shiny green flies were having it for brunch. The Circle of Life. I immediately thought of the book Lord of the Flies, the 1954 novel by William Golding. It wasn’t a pleasant scene with a pig in the book and it wasn’t a pleasant scene with a deer at the river.

A few paces later we broke out into bright sunlight gleaming across a brushy field of cheerful yellow flowers. There appeared to be as many butterflies on the flowers as there’d been flies on the deer. The time between the two incidents was so brief my immediate thought was “Lord of the Butterflies!”

I uploaded that picture to the web; google and another app identify them as a Silvery Checkerspot (Chlosyne nycteis). I don’t 100% trust that; please leave a comment on here if you know different.

We had a nice chat with a couple of people near the river’s edge when we arrived this morning. I regret not asking the photographer’s first name so I could include it here. Whoever you were, thank you! This was around 9:15 this morning, only a couple minutes hike downstream from the main parking lot: 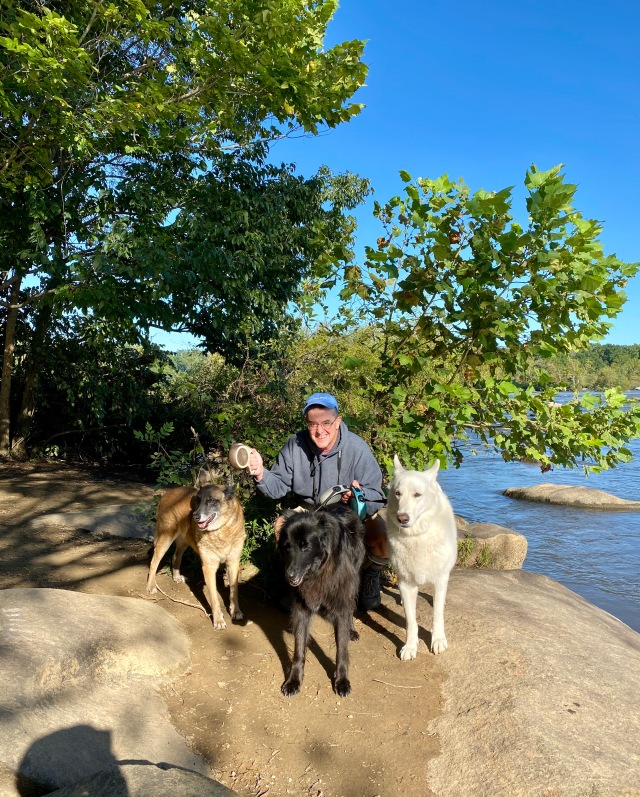 I’ve seen a handful of raptors this week but my pictures have been unbrilliant. I saw this Redtail near the Westbury Apothecary Monday afternoon. This is a big female; she looks nice in this light:

One day this week I saw two Red-shouldered hawks perched together – something I’ve never seen! Crazy! I drifted into a handy parking lot and rolled to a stop. I was just putting my window down when one flew away! Bummer! But it’ll happen again. This stuff always happens in patterns. Here’s the one that was still perched after I took my lens cap off::

Half a pair of Red-shouldered hawks perched on the cross at Staples Mill Road Baptist Church:

It’s the second half of September; days are getting shorter and autumn officially begins (here in Richmond) Tuesday morning (9/22/2020) at 9:30. There are still plenty of bright, gorgeous flowers, even a few that smell great, but enjoy them while you can – they’ll be finished for 2020 real soon. But not yet! Here’s one of Ev’s wine colored hibiscuses. I took this picture Thursday morning:

Lush red hibiscus in our backyard

To give you an idea of the size, I asked Turner if he’d stand near it – for just a moment: 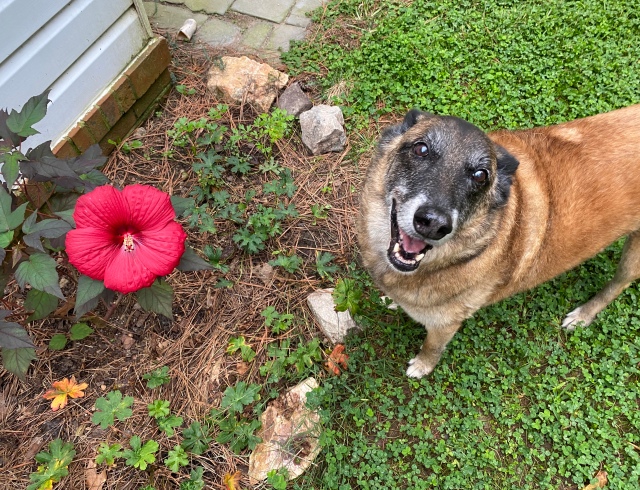 I used Turner for scale because I didn’t have a quarter handy:

Our gardenias are moving slow but I photographed (and sniffed) this and several more off Patterson Avenue on my way to the Y: 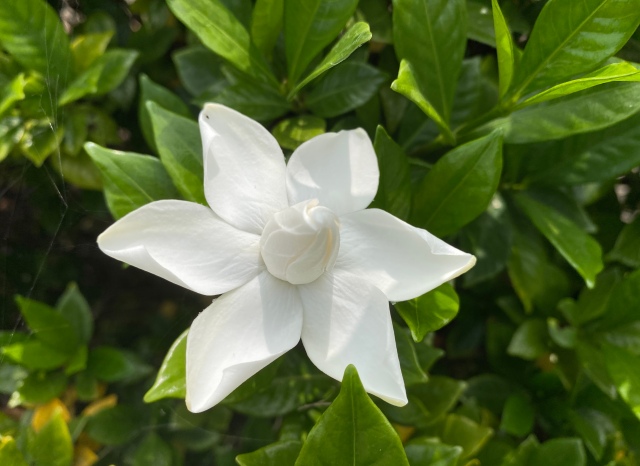 September gardenia – on Patterson Avenue! In a public parking lot!

Our milkweed got top heavy and bent over at a 90º angle, parallel to the ground. Twenty four or forty eight hours later it bent (to follow the sun) another 90º to turn vertical again. Monarch butterfly caterpillars think it’s an edible and delicious jungle gym. At around 5:30 this evening I went outdoors to photograph a few. The light was not super helpful; I only got one picture I enjoyed. But I could count at least ten caterpillars, and maybe there were more. It’s a jungle gym after all, not a ladder:

I suspect caterpillars can’t see far; I don’t know how that would help them pass their genes on. But they’d have to be 100% blind to miss the Beautyberries (Callicarpa) drooping low over their green jungle gym:

Well named “Beautyberries” for caterpillars and humans to enjoy

Honeysuckle is invasive in Virginia but (IMO) it is lovely and graceful and delicate, and even in late September it smells as delightful as any flower you’ll find in any month: 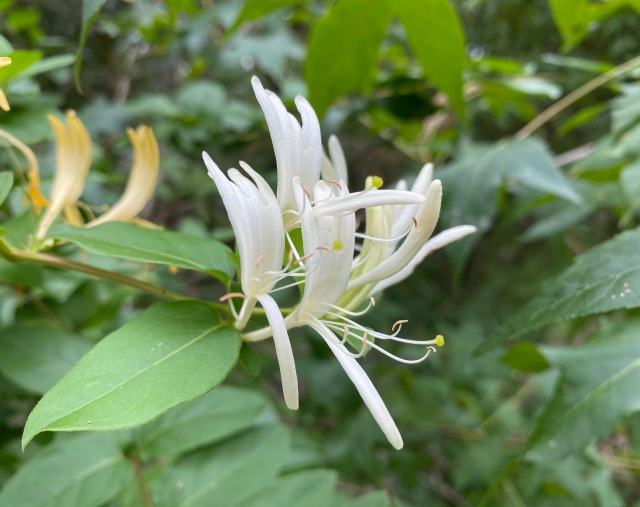 I was saddened to learn of the death of the brilliant and principled and hard working Ruth Bader Ginsburg. I’ve already read a couple of books about her, and since she died Friday I’ve read about her from a number of online sources. Nina Totenberg at NPR knew her well and wrote a beautiful piece after she died. This line jumped out at me: “I do think that I was born under a very bright star,” she said in an NPR interview. I agree. Yesterday the NYT reprinted a 2016 article by Justice Ginsburg called “Ruth Bader Ginsburg’s Advice for Living.” She wrote this before the 2016 election, and ostensibly it was about marriage, but she emphasized the advice was about life in general. It certainly applies to me in this second half of 2020: “Reacting in anger or annoyance will not advance one’s ability to persuade.”

Enjoy some butterflies! Flowers! Caterpillars! Come back next week!

I am a rehabilitation counselor. I have many friends with autism and traumatic brain injuries. They help me learn new things constantly. I hike with dogs at the James River in Richmond - a lot. I've completed an Iron distance triathlon a year for 11 years. My most recent was in Wilmington, NC in November, 2013. I currently compete in mid-distance triathlons. And work and hike and take pictures and write and eat.
View all posts by Jay McLaughlin →
This entry was posted in Birds, Dogs, Flowers, Fun, Gardenias, honeysuckle, James River, koans, love, newfaze, People, Pony Pasture, raptors, red-shouldered hawks, Red-tailed hawks, Rivers, simplify, Smiles (including "dog smiles"!) and tagged Dogs, Flowers, Fun, Gardenias, james river, nature, outdoors, People, Pony Pasture, red-shouldered hawks, Red-tailed hawks, Rivers, smile, Smiles - human AND dog smiles!. Bookmark the permalink.