As most of you are aware (perhaps this is how we are acquainted) I enjoy talking with strangers. Martin’s is a favorite place. So, of course, is Starbucks, and Pony Pasture too. This afternoon I went to Martin’s. Evelyn and I had lunch at The Farmer’s Market at St. Stephen’s, 6000 Grove Avenue in Richmond. Specifically we had lunch at The Boka Tako Truck. Not yet a slam dunk conversation starter – except I had a frog leg taco! I swear I’m not making that up! You can talk with everyone you know all week, and several complete strangers, and  it is very, very unlikely you will meet anyone who has recently eaten a frog leg taco. So I was in Martin’s at the Village later and it was packed and the lines were long and what could be more entertaining than talking about the frog leg taco you just had for lunch? It was entertaining for me, anyway. The people I talked with seemed interested too. Unless they were just being polite… It was better than standing in line staring vacantly at the cover of Soap Opera Digest. Not that there’s anything wrong with that.

I regret not taking pictures at the Farmer’s Market today. When I left the house this morning I didn’t even know I’d go there, much less eat a frog leg taco. I had my cell phone with me but didn’t get any pictures. Frog leg tacos are a fascinating culinary experience but are something other than photogenic. The Farmer’s Market itself was quite fascinating. Dogs everywhere, which was a ton of fun.

And speaking of dogs. You knew it would get back to that, didn’t you. Anyway, one delicious item Evelyn gets there – I’ve mentioned this before – is Reginald’s Homemade Peanut Butter. Today I was able to restock on my own, and I spoke with the owner. I had a conversation that didn’t even involve a frog leg taco! I asked the owner if he was Reginald. He said no, Reginald is my dog. Not only is Reginald’s made here (in Manakin-Sabot), from Virginia peanuts, it’s named after a dog. How could it not be delicious.

There will be pictures of the Farmer’s Market in the future. Meanwhile, a couple of pictures from the river. It’s misty down there in the morning now, or it has been recently. It gives the river a nice look. Faintly eerie, but peaceful: 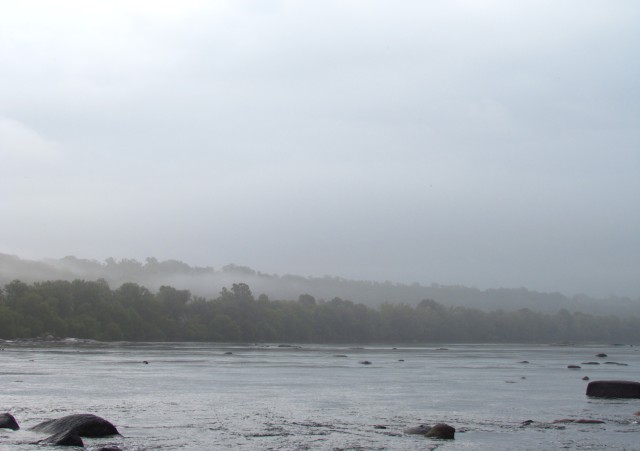 It burns off while we walk, but lingers if we’re in the shade and there’s no breeze. This is Mackey almost at the car, with Roux loping up the trail behind him: 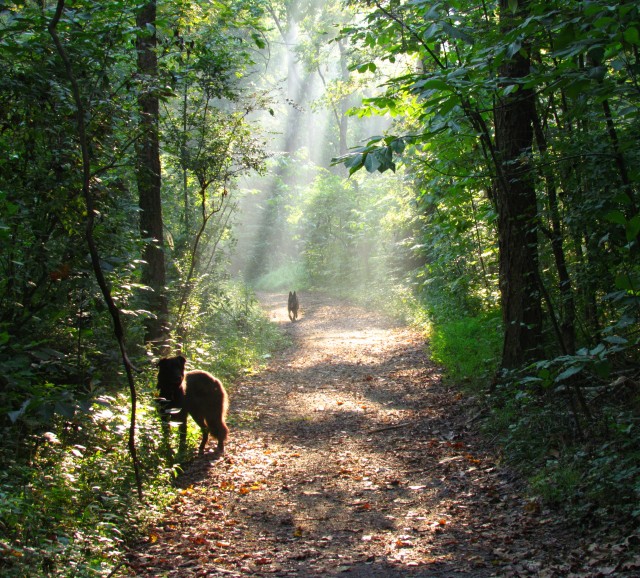 Mackey and Roux in the mist

I almost titled this post “something is getting fat at Pony Pasture”. The mosquitoes Thursday morning were just out of control. It was amazing. I doubt if they were getting fat; there were too many for all of them to get enough to eat. But whatever is the next level up the food chain is just getting stuffed. Maybe dragonflies or damselflies or all manner of birds and certainly bats. But if you are an organism that dines on mosquitoes, the buffet at Pony Pasture is all-you-can-eat-and-then-some. The one in this picture isn’t enormous, but there are some record-book mosquitoes down there. Perhaps mosquitoes use Pony Pasture for a mosquito-sumo-wrestler training facility. Because they are the sumo wrestlers of the mosquito world.

Not a fun picture to take

Getting ready to head south

The makeup of plant life is changing as the weather changes. There are always mushrooms and fungi and lichen at Pony Pasture, but they are proliferating now. It’s damp and cooler and there’s almost three fewer hours of sunlight every day. I’m seeing much more of this and other varieties:

As my Dad is fond of saying, "there's a fungus amongus"

I’ll sign off with a wave. If you look close you can see clouds reflected in the water. Have a great day,

I am a rehabilitation counselor. I have many friends with autism and traumatic brain injuries. They help me learn new things constantly. I hike with dogs at the James River in Richmond - a lot. I've completed an Iron distance triathlon a year for 11 years. My most recent was in Wilmington, NC in November, 2013. I currently compete in mid-distance triathlons. And work and hike and take pictures and write and eat.
View all posts by Jay McLaughlin →
This entry was posted in Dogs, Flowers, Fun, Rivers. Bookmark the permalink.