I thought long and hard before coming up with that catchy title for this post. Creative and original too. The last post I put up was two weeks ago. It’s been a fun couple of weeks but I haven’t sat down and written. I’ve taken a handful of fun pictures, or at least so I like to think. I’m also in the final few weeks of training for Beach2Battleship. The race is two weeks from Saturday. One more short swim and one more short run, then a very long ride Saturday and a very long run Sunday. Then I begin to taper, yay. For the uninitiated, the “taper” is a time many endurance athletes cherish. After months of heavy training, we now ease off for a couple of weeks while our bodies recover and (at least in theory) consolidate our training efforts in preparation for the big event. If you ever mention it to a long distance athlete, they often get a dreamy look and say “ahh… the taper.” It begins Sunday after my long run. “The taper” is perhaps second only to crossing the finish line on the list of enjoyable experiences for endurance athletes. Anyway, a few pictures from the past fourteen days or so:

My oldest niece’s birthday was on the 5th. She’s 23! Wow. I remember when she was born. Six months to the day after my accident. October 5, 1988. Happy Birthday Aileen!

The 5th was a Wednesday and Clark and I went to see trains. There was a beauty down there and it was a pretty day. As many pictures of trains as I take, you’d think I’d avoid an amateur mistake like cutting off the back corner like this. Oh well. If I was perfect, as Nathaniel Hawthorne said in The Birthmark, the angels would come and take me away. I think I’ve used that quote before. But I’m fond of it. I’m fond of anything I can do to let myself off the hook. Anyway, it’s still a cool picture. My favorite locomotive ID site (rrpicturearchives.net) identifies locomotive #5443 as two different engines – an ES40DC and an ES44DC. I’m not certain which it is. I thought it was an ES44 (4,400 HP) but they have “derated” some of those. But this is on the front of ~10,000 tons of coal going downhill so they are more likely to have lots of HP on the front: 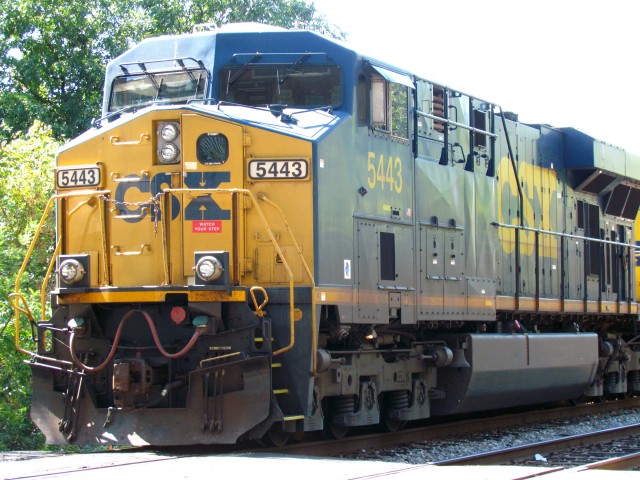 Perhaps you heard a certain brilliant human being died before his time that day. RIP, Steve: 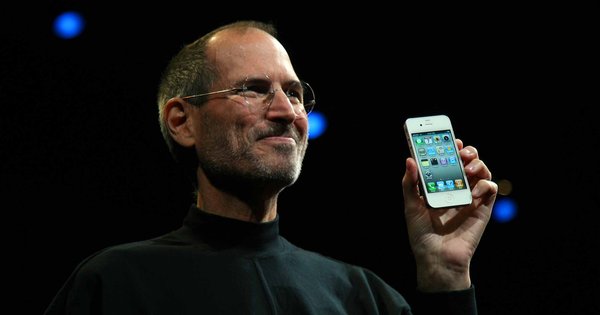 Mackey and Roux and Turner and I made it to the river as the sun rose the following morning. All was right with the world: 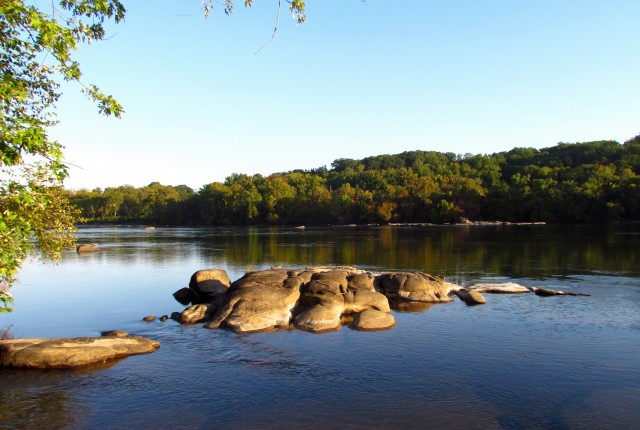 Roux leaves the river the way all dogs should leave the river, with zero left in the tank. This is a pose she’s recently adopted; now she does it following every hike: 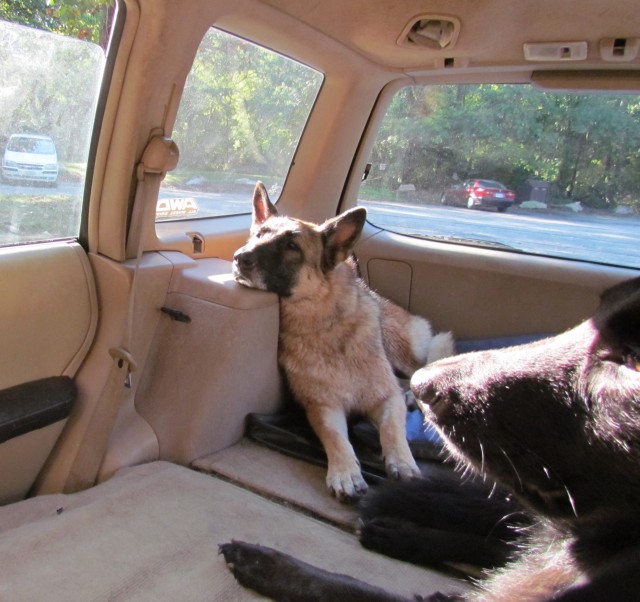 If you snooze, you win

Evelyn joined us Sunday. Can you blame her?: 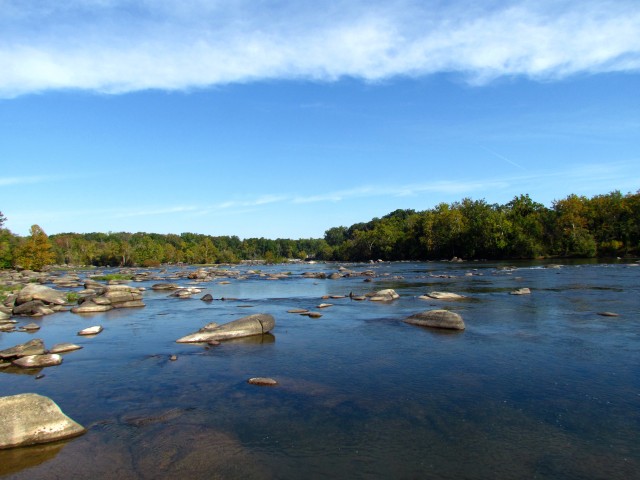 Evelyn and I and I’m pretty certain the dogs enjoy looking at the birds and the trees and the sky. The resident waterfowl choose another perspective: 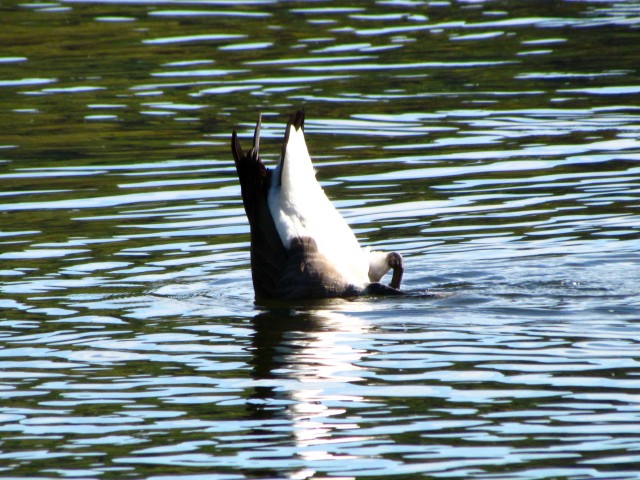 Thursday’s here again, I’m happy to say. The New Friday. Even though I have to work today and a lot tomorrow. But Thursday is our early river morning and I always love it. We saw a nice looking heron this morning. I’ve never heard from anyone – and I’ve researched it a little (that means more than just Wikipedia) – is there any way from a distance to distinguish between an adult male and an adult female? I think there’s not. Enlighten me if you know. Anyway, whatever the gender, this is a fine looking bird: 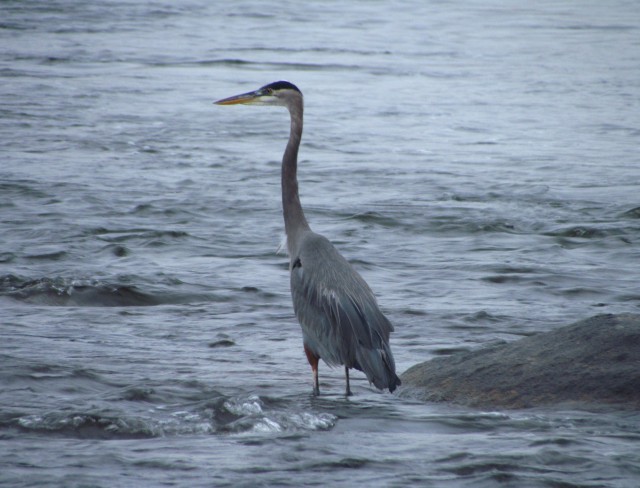 I never (not ever) get tired of looking at the river. But here’s a nice picture of a little fog lingering at the pasture on our way out this morning: 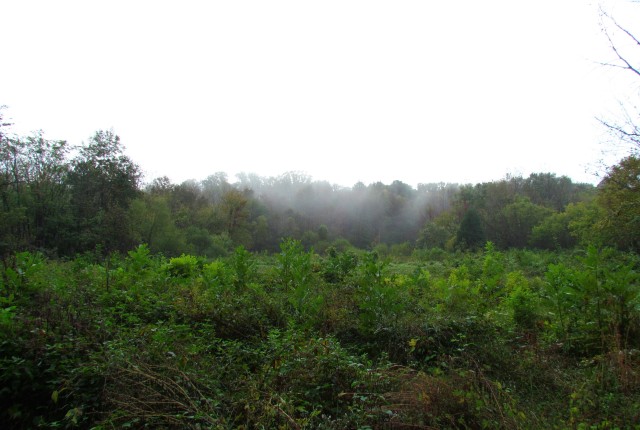 Fog drifting off the pasture

I am a rehabilitation counselor. I have many friends with autism and traumatic brain injuries. They help me learn new things constantly. I hike with dogs at the James River in Richmond - a lot. I've completed an Iron distance triathlon a year for 11 years. My most recent was in Wilmington, NC in November, 2013. I currently compete in mid-distance triathlons. And work and hike and take pictures and write and eat.
View all posts by Jay McLaughlin →
This entry was posted in Dogs, Fun, People, Rivers, Smiles (including "dog smiles"!). Bookmark the permalink.