Only two June posts – isn’t that awful? Of course maybe I’ll only get one for July, who knows, but the month and the summer and the second half of 2012 are off to a grand beginning. I’ve seen neat stuff, especially at Pony Pasture, and gotten some rewarding photographs. In addition to being a happy summer it’s been a very hot summer, at least here in central Virginia. That’s helped me get some better pictures than I normally do because, like me, everything else slows down in the heat.

Evelyn and I went to a movie last week and when we got out of the car there was a little flock of mourning doves sitting in the shade on top of the fence. I had my camera with me and when I zoomed in for a closer look, you could see very clearly all the birds were panting! Who even knew? It’s like the answer to a bad joke – “How hot was it? It was so hot even the mourning doves were panting.” Remarkable: 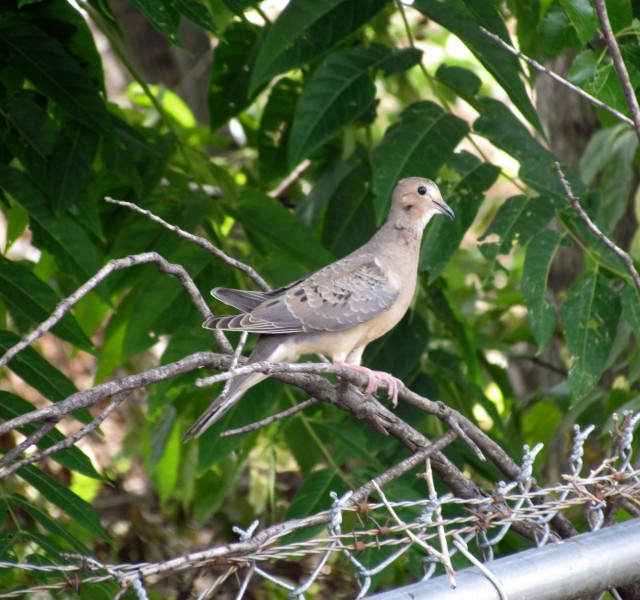 Everyone who has seen my facebook page (and even a lot of people who have not) already saw the huge buck I photographed at Pony Pasture on July 3. The temperature was in the 90’s that day, and this big guy was out on the trail at 11:30 in the morning, within easy earshot of the parking lot. Incredible: 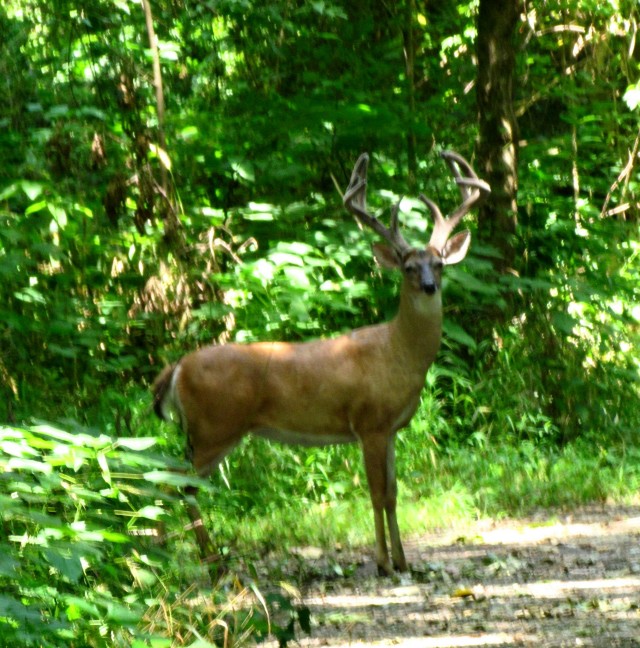 The biggest deer I’ve ever seen in my life not on a magazine cover. And he was in the City of Richmond!

The same morning I got a nice picture of a killdeer too; I don’t see tons of them at Pony Pasture: 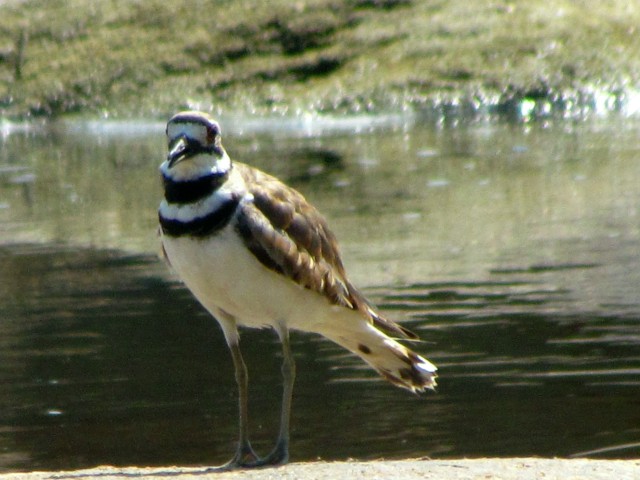 I see (more to the point I hear) why the second part of their binomial (Latin) name is “vociferus” – they are only very rarely silent. They sure are good-looking birds, though.

When it was hot and the birds were slow, I also got a reasonable picture of a Green Heron: 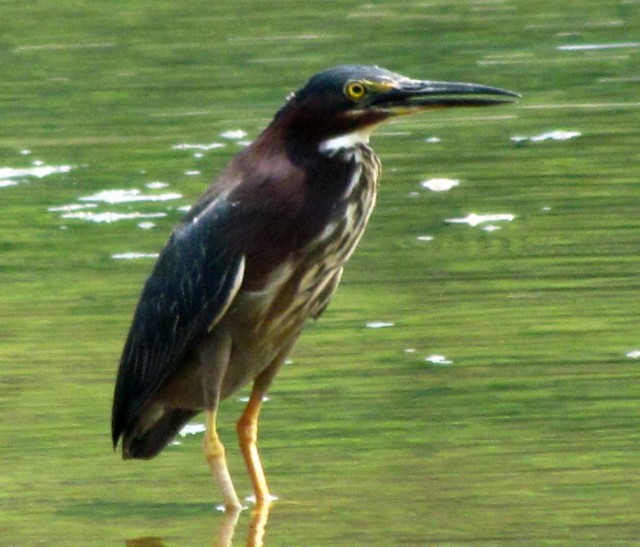 Blue herons are quite common down there, but it’s not often I see several together like this. I guess the heat was slowing them down too: 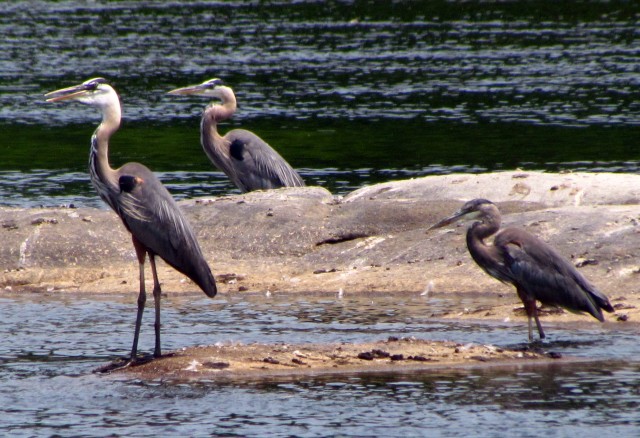 Three Great Blue Herons (Ardea herodias). Maybe that one on the right is a youngster. The coloring is a little different.

For many summers a bulb has grown up in my dog-pummeled backyard but I’ve always run it over with the lawnmower before it’s sprouted. This year I kept mowing around it and look what appeared!: 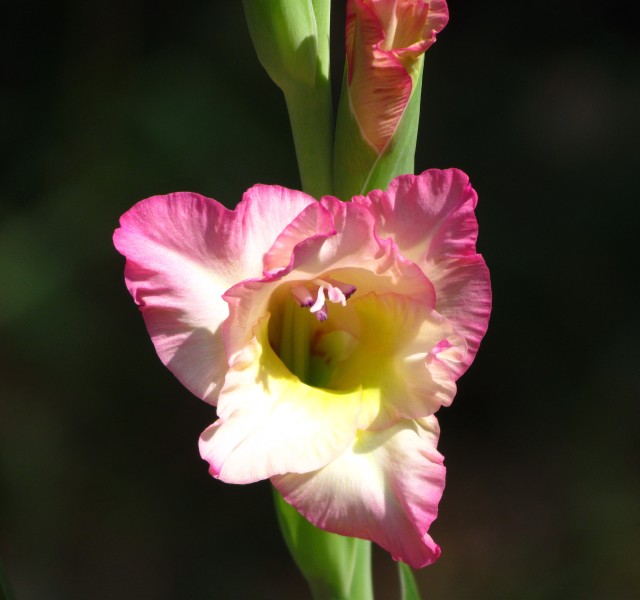 When the weather cools off in October I like to have a big pile of firewood ready. My friend Tim (what would I do without him!) has been helping me build up my pile as the summer’s gone on. This is what it looks like behind my garage right now. I’ll cover it up next month and let it dry out; it will be perfect when it’s time to have fires: 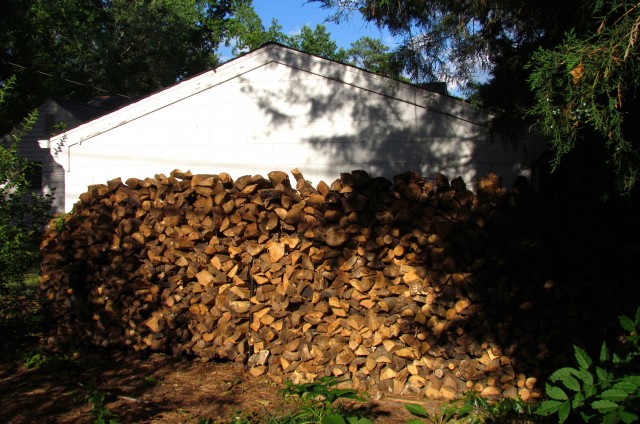 I wish we’d get a cold snap! Not likely, I’m afraid.

I’ve been friends with a guy named Skye for almost eighteen years (!) now; some of you know him. Unfortunately for me he moved to Charlotte, NC three years ago, but we stay in touch. His grandmother has a nice house at VA Beach. Skye was coming up to visit her so she invited Evie and me to come down and spend some time with them. Evelyn had never met either of them, and they’re like part of my family! We went down in late June and stayed for the day; it was beautiful. It was Betsy, Skye, Evelyn, Skye’s friend Clay, me, and Betsy’s two beautiful dogs Misha and Taffy. The seven of us spent a lot of time lounging out back and enjoying the view: 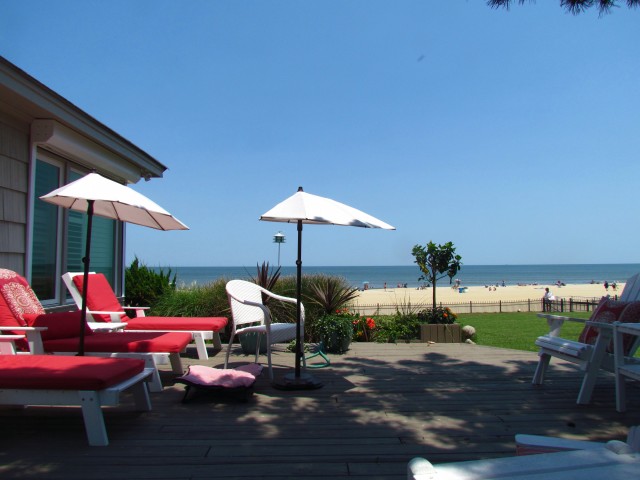 The hospitality could not be beat! 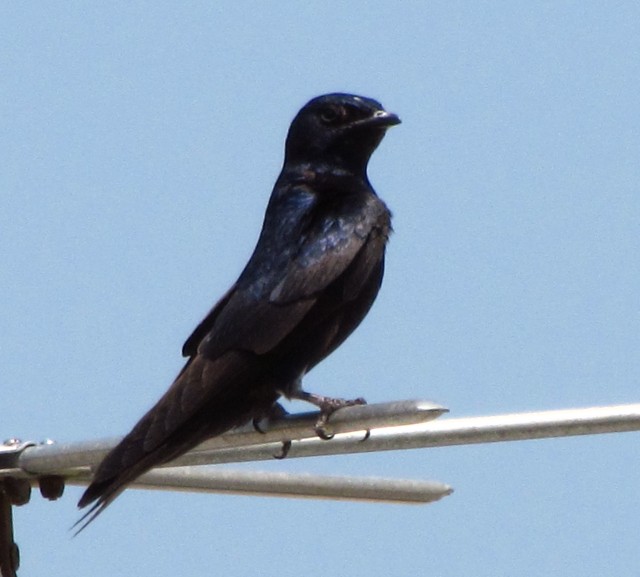 Followed quickly by this Fighting Falcon: 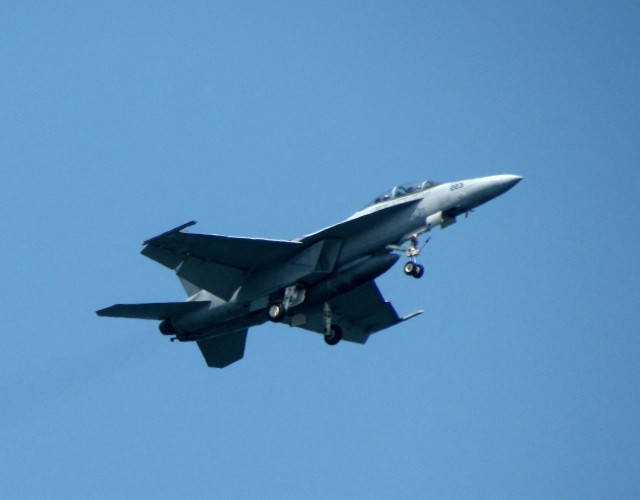 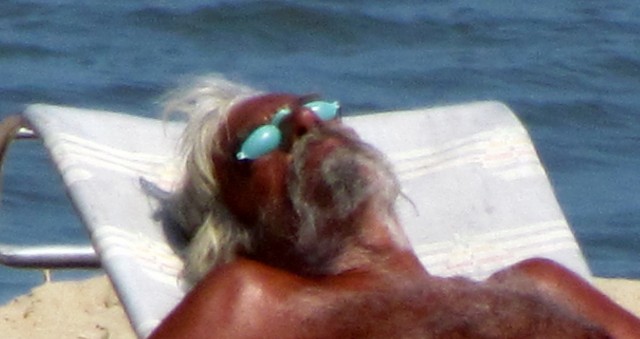 Has yet to be identified. The eyes are its most unique feature.

July began with Alex and Roux joining Mackey and Turner and me for a quick jaunt to Pony Pasture. I convinced Alex to take our picture. She was more cooperative than the dogs were, but this was at the beginning of the hike and they didn’t want to stop: 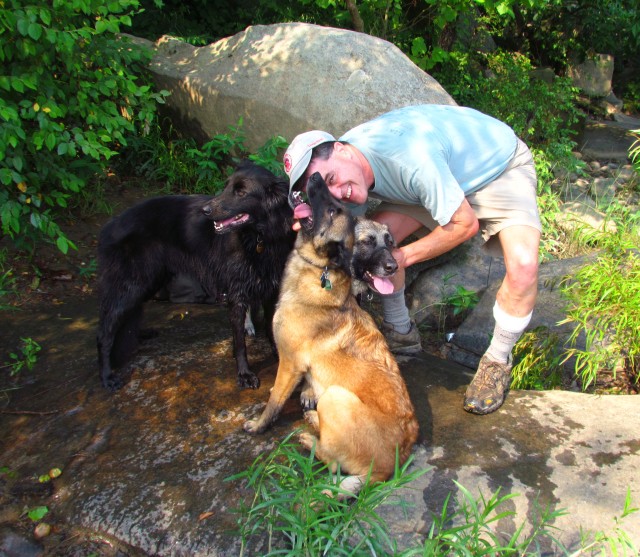 I’m happy – the dogs will be much happier once they’re off and running! And swimming!

The next day (Monday) a buddy and I hiked at Huguenot Flatwater. We wanted to go get a last look at the “old” Huguenot Bridge from below; they’re going to begin tearing it down this month. There are some little canals near the river bank and we saw a hen and drake mallard playing in the mud. I say “playing”; I presume this had some purpose: 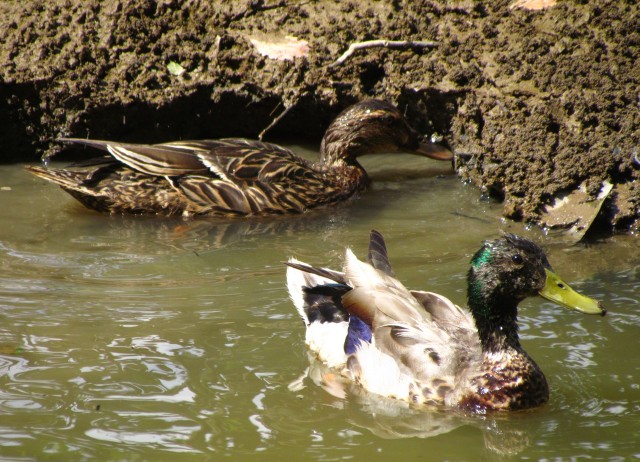 A moment later the male turned directly toward me. I’m certain this is what in the duck world passes for a disapproving glare, but I had a difficult time taking him seriously. I hope he didn’t find my attitude callous, although I may have felt that way if our positions were reversed: 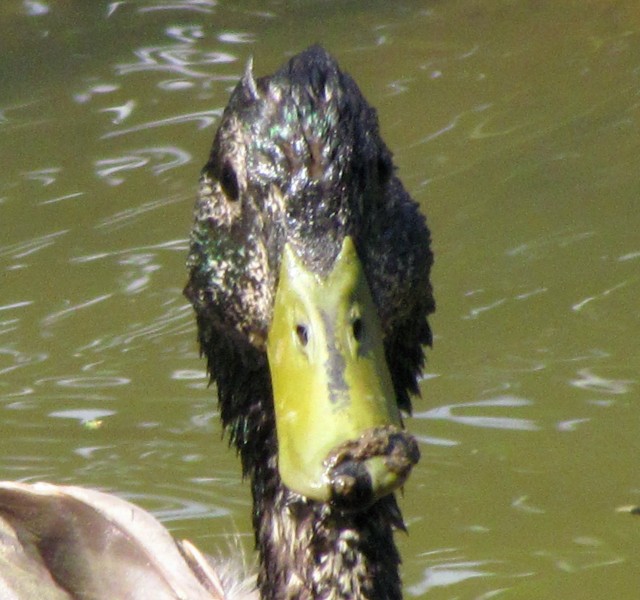 Stared down by a male mallard (Anas platyrhynchos)

Earlier this week I was at the Starbucks near the VA Eye Institute (what a surprise!) and mockingbirds were making a huge racket near the dumpster. I looked up and saw them harassing this magnificent red-tail. I’m sure he (I’m relatively certain it’s a male) was doing just as much harassing; there was probably a nearby mockingbird nest. My friend Meryl works there and she was just arriving for work. She has a special fondness for red-tails and showed me a spot where I could take a better picture. This one turned out relatively well: 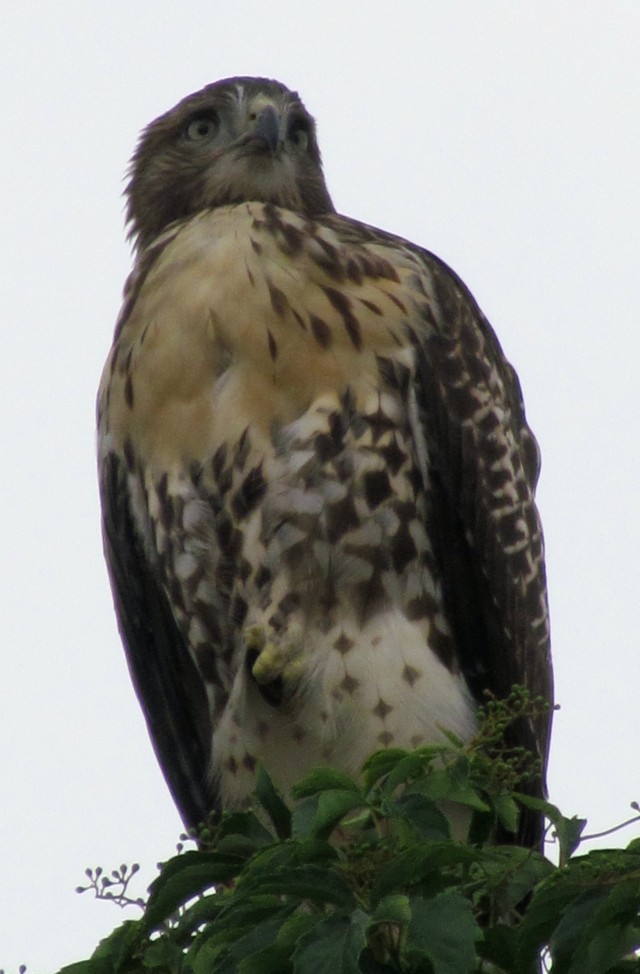 My friend Kim later informed me it’s a juvenile red-tail, and she knows from raptors.

I know some viewers of this blog are especially fond of train pictures, and there’s not a single one on this post! Unfortunately the ones I do post are primarily CSX locomotives on the front of coal trains and maybe some people get tired of those. I don’t (obviously) and I’ve gotten a few new ones since my last post. I’ll close with a train picture so all the train lovers have something too. In this picture (it’s sub-par) the front locomotive (872) is an ES44 and #280 is an AC44. If you want to be a goofy train-nerd like me, you can tell them apart by that little extra vent at the rear on #872. But also the train numbers are in different places: 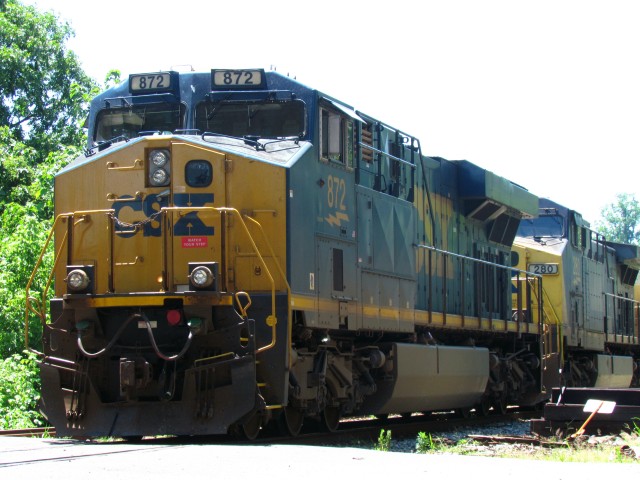 Enjoy your summer! I’ll get another post up soon! Have fun,

PS My Ironman this year will be in Wilmington, NC again, and this year it is on October 20. So “official” training (for me) commences on July 23, thirteen weeks before race date. So I’ll be getting busy with that. But I’ll get some more posts up. For those of you unfamiliar with my annual autumn obsession, you can see more about this race at the Beach2Battleship website.