On Saturday, October 20 at around 11:10 PM in Wilmington, NC I finished my 10th 140.6 mile triathlon in the last ten years. I don’t get faster every year, although this wasn’t a bad race. But I enjoy myself a little bit more each year. Which is why I’ll register for the 2013 PPD Beach2Battleship Iron Distance Triathlon as soon as registration opens.

Of course I have a lot of pictures, mostly thanks to having Evelyn along. Mom and Dad couldn’t make it to the race this year. Maybe next year. Shane (one of my two brothers) helped me on my first 140.6 mile triathlon in 2003. So now Evelyn, Shane, and Mom and Dad are in a three-way tie for best support team ever. Thanks Evie! I’m not sure what order to use these pictures. I should start at the beginning, but this is a post race picture some volunteers took for us. You can tell the race is over by the shell-shocked look on both our faces. We got up ~4:45 AM to go to the start. I finished the race ~11:10 PM. This had to be close to midnight. We were happy it was over!

It’s been a long day and we are VERY happy it’s over!

Rewind to the day before when Evie took this picture of me on the dock. That’s the channel we swam down in the morning, where we climbed out of the water and ran to the changing tents to get ready for our bike ride. 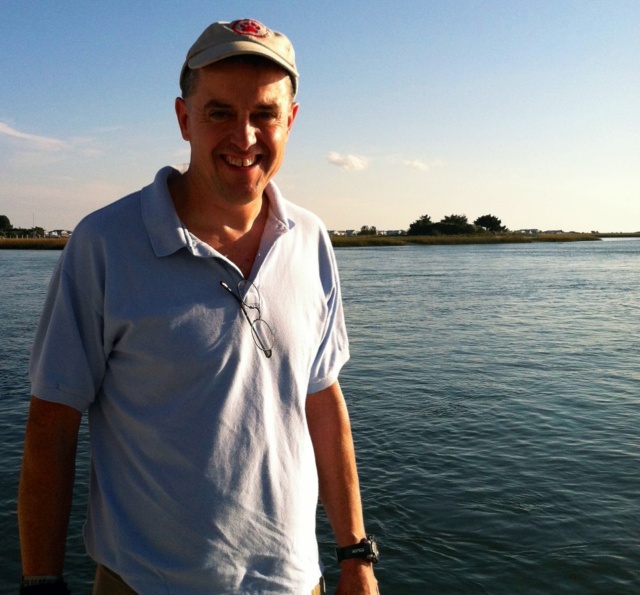 Getting ready for the next day – beautiful swim course!

This is still from the day before; you can tell by my blue shirt and baseball cap. This is in T1 (swim to bike transition area) getting my bike set up for race day morning:

She helped me get all my stuff squared away, we went to eat, etc. I get extremely anxious the night before my race. Mostly because I’m not confident my bike, helmet, running shoes, wetsuit, all that stuff, is in the right place. I’m always confident in my ability to swim 2.4 miles, bike 112 and run 26.2 – I have zero anxiety about that. But the details make me edgy. Evie’s a confident and capable organizer and helped me be calm on race day eve. And got me to the starting line in one piece. Then we didn’t see each other for nearly sixteen hours! But I think she had a great day and I know I did.

I was standing at the swim start behind a guy who had one arm amputated at his shoulder and one slightly below his elbow. He was wearing his wetsuit and ready to swim. We both stopped in the same place for a drink and a snack at around mile 90 on the bike and chatted for a minute. I got about 9 minutes ahead of him on the swim (swimming with two complete arms) and our 112 mile bike times were separated by 10 seconds. He beat me like a rented mule on the run and finished the race about 27 minutes ahead of me. Read his story here; this guy is incredible. Think about this next time you’re faced with something “impossible”: No excuses… don’t stop living

If you’d like to see the race results, they’re here: http://www.setupevents.com/index.cfm?fuseaction=event_results&id=3205

Just a few race impressions. The swim was great, as it is every year at B2B, although this year it was much warmer than it’s been recently. Still, it took me 1:00:46. I’ve done B2B twice in around 0:56:00 so that wasn’t blazing fast, but I’ve also done B2B in 1:35:00, so I didn’t complain. The first year I did B2B was 1:00:39 – 7 seconds different from this year. 7 seconds over 2.4 miles. Amazing. What a beautiful morning, though. It was beautiful when I was breathing on my right side to watch the sun creeping over the edge of the ocean. I wish I had pictures but the only ones are in my mind. You can watch the start on this youtube video to get some idea. But the camera’s facing mostly west so you don’t see it. Plus when I was a half mile out there in the water it was quieter and more peaceful and more pleasant and there was no recording of Eminem singing the theme from 8 Mile, like it or not. It was salty and cool and clear and brisk and beautiful. I’d had a wonderful dream about Ivory the night before, the first dream about him I’ve ever had, and it was pleasant to recall as I tasted the ocean and inhaled the salt air and watched the sun come up.

Evie helped me stash a pair of old grass cutting sneakers on the dock the night before and I found them quickly and sped through T1 (swim to bike). Last year’s time for that segment: 23 minutes. The year before: 28 minutes. This year, thanks to those sneakers: 12 minutes. Whoa. To put that in perspective, a few athletes did it in less than 3 minutes (!) but for me it was a huge improvement.

I enjoyed the bike a lot, especially after last year’s wind and drizzle and cold suffer-fest. It was breezy but sunny and gorgeous. Last year took me 7:36; this year was 6:55. That’s the second slowest of the ten 140.6 mile races I’ve done, but it was distinctly non-miserable. Anyone who knows me has heard (likely until they’re sick of it) that my goal when racing is to “have a good time.” For me that means enjoyable, and I enjoyed this ride the most of any I’ve ever done.

Evie took a picture of me the evening before the race in T2, the bike-to-run area. These bags each had our race number on them (this year I was #47) and all of our gear for changing from the bike to the run. There was a changing tent at the end of the racks. I handed my bike off to a volunteer and went in and took my helmet off and put my running shoes on and headed out. Here’s what T2 looked like the night before the race: 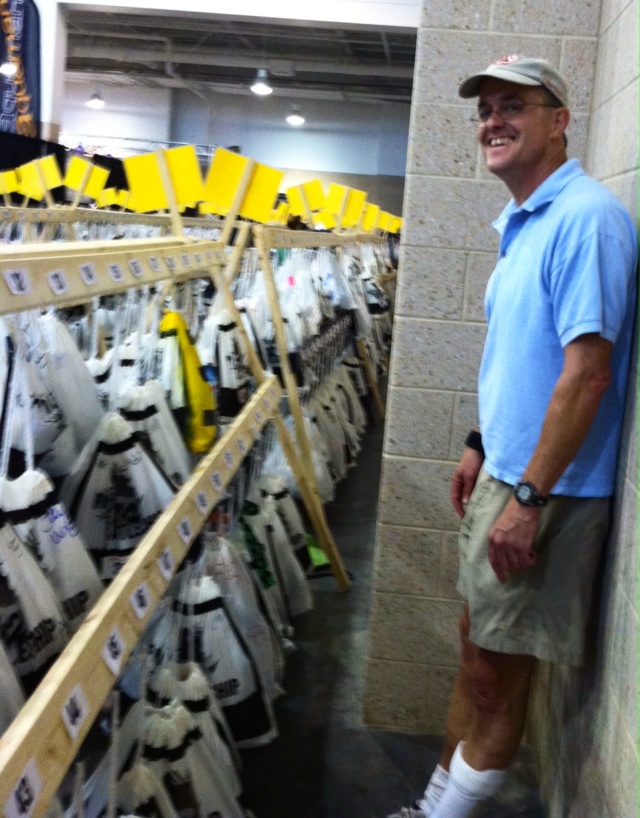 T2, or bike-to-run transition area, the evening before the race

The run is where I really slow down, and perhaps not coincidentally it’s where I enjoy myself most. It’s where I have the most opportunity to interact with people. It’s very, very important for me to set my feet up just right for the run and I didn’t do it this year. That cost me and this year’s run was a whopping 26 minutes slower than the next slowest ironman run. My legs felt fine but my feet were killing me and I walked a whole, whole lot. What the heck, it gave me more time to take pictures. Starting with this one around Greenfield Lake:

It gave Evie time to take a few herself; I particularly enjoyed this one:

There are many rewarding things about this event; Wilmington is a great town. I think every year I’ve eaten a post race brunch at the Boca Bay Restaurant on Eastwood Road in Wilmington. I can not recommend that place highly enough. I’ll be the first to admit that I’m so starving every time I go there, even the shingles on the roof would taste good. But my dining companions always enjoy it as well, and Evie was no exception. I snapped this picture an instant before I devoured this plate in about the time it takes a normal person to eat one Cheerio: 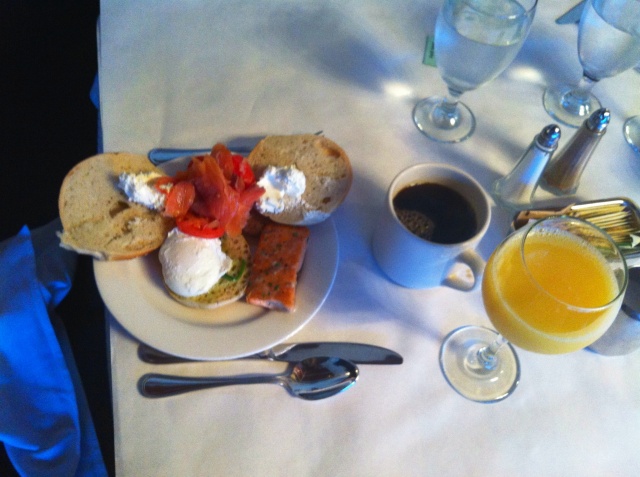 The first helping of many

There are a million reasons I love this race. Check out this little odd one. The
beginning of the run was on the boardwalk at the water’s edge. There was a little girl, I guess 12 years old or so, with a big saxophone. I don’t know much about saxophones but this was about ⅔ as big as she was and had a very, very deep sound. The British heavy metal band Black Sabbath released a song in 1970 – probably before her parents were even born – called Iron Man. If you’re of a certain era, you’re familiar with it, and with its iconic first five notes. She was wandering around the boardwalk with her head down, playing those five notes over and over again. It was so cute and odd and charming.

I love the people at B2B more than anything. Volunteers, spectators, organizers, athletes, every one is great. I wish I could remember all their names, and recognize each individually for all the times they made me smile this year and all the other years. But let me give an example from this year’s race. All the volunteers are great; this is just one that stuck in my mind. I wrote the race director about it, I was so pleased.

My walking stride mostly passes for normal. But my running gait is in equal parts inelegant, ungainly and awkward. Noticeable from a long way away, especially since I’m tall and wear a brace on my leg. And in 2008 there was a volunteer on the waterfront named Ryan and we chatted for a moment or two. On each loop of the run. We resumed our brief acquaintance each year at B2B on the run. Last year I told him how happy I was about the m&m’s. This year – I see this guy once a year, for fifteen or twenty seconds – he says “Jay! How’s it going! Did you get your m&m’s this year?” I smiled and said no but I’m having a great time and headed back out for my second loop. The run took me  over seven hours, so it was a long time before I returned. And when I did, Ryan is standing there holding one pack each of plain and of peanut m&m’s. Because he wasn’t sure which I liked better. And that, folks, is why I go back to B2B every year. Not because of m&m’s. Not even because of Ryan. But because that enthusiastic, engaging, people-focused attitude pervades every facet of the race experience. Here’s me at the finish line:

This is what I was looking for all day: 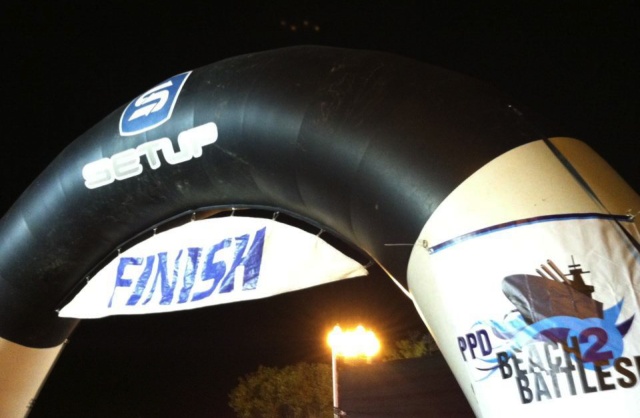 The finisher’s medal isn’t bad either:

Check out this OUTSTANDING finisher’s medal!

Anyway. Until next year! Until next year at B2B, that is. Another blog post soon, I hope. Thanks for your support and friendship and I look forward to seeing you soon,

I am a rehabilitation counselor. I have many friends with autism and traumatic brain injuries. They help me learn new things constantly. I hike with dogs at the James River in Richmond - a lot. I've completed an Iron distance triathlon a year for 11 years. My most recent was in Wilmington, NC in November, 2013. I currently compete in mid-distance triathlons. And work and hike and take pictures and write and eat.
View all posts by Jay McLaughlin →
This entry was posted in Endurance, Fun, People, Smiles (including "dog smiles"!). Bookmark the permalink.

22 Responses to More fun every year!