Summer and more (a lot more)

“Whatever is happening is the path to enlightenment.” – Pema Chodron

“Wherever my travels may lead, paradise is where I am.” – Voltaire

I was thinking of those two quotes last Tuesday (June 18) while Evie and Lou and I were driving on 95 south toward Richmond. We’d been to my Dad’s funeral at Arlington National Cemetery earlier. Between the traffic and the rain, the 100 mile drive took nearly five hours. But it was paradise to spend the day with my family and friends and the loving memory of my father. And it was paradise to ride in that car with Evie and Lou. I was thinking about the path to enlightenment. Whatever is happening. I’ll go back to that.

It’s the first week of summer now, but some readers may recall I’ve done a couple of posts about how the flowers and animals have been bursting forth this spring. The day before yesterday was Friday, June 21, the first day of summer. I leave the house around 6:30 AM on Fridays and I was sitting at my computer reading the New York Times. The window is to my right and something moved in the front yard and I looked up and saw this!: 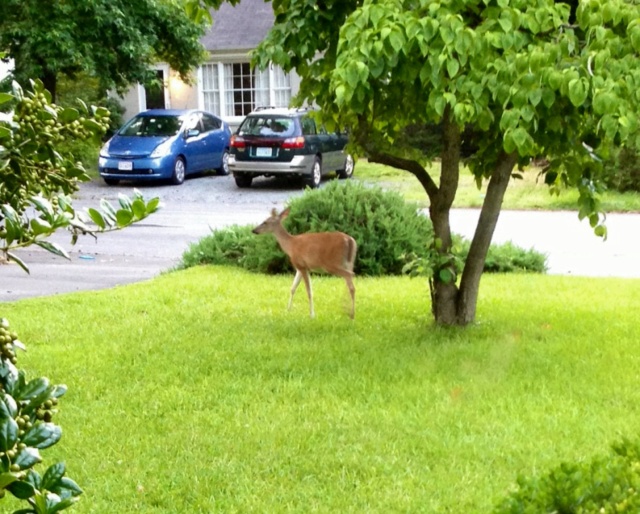 In my front yard! Near Regency Square! Wow! What a treat on the first day of summer!

I was amazed and delighted. If you don’t know where I live, trust me – there are no  deer in this neighborhood. There are gas stations and fast food restaurants and convenience stores in five minutes walk in any direction. One friend saw this picture and said “so pretty – a great surprise!” and another “Cool!!” A third wrote “not a good thing. Destroys shrubbery.” In my opinion, this street has too much shrubbery and not enough deer – I don’t mind the balance tilting a bit.

I saw the enlightenment quote in a magazine somewhere and photographed it for later. The Voltaire quote I saw on the wall of Project Yoga Richmond (PYR) when I visited with Evie a year or so ago. PYR is a nice place; Evie teaches a class there each week. Here’s a little info about Evie’s class: Evie’s class (!)

Speaking of summer, both of my brothers were born in July. One was born on July 20. Which, if you are unaware, is the anniversary of the first day a human being (Neil Armstrong) walked on the moon. It was 1969, about a month before my eighth birthday. As I’ve gotten clearer moon pictures, I’ve studied my lunar geography. In the picture below you’ll notice two large, dark circles connected. The one on the left is the “Mare Serenitatis” or “Sea of Serenity” and the one on the right is the “Mare Tranquilitatus” or “Sea of Tranquility.” Notice how “Mare” sounds like “marina” or “marine” as in “marine life” or “marine  mammal?” In ~1650 when they first looked at the moon through telescopes, people thought those were oceans. The Sea of Tranquility is where Apollo 11 landed and Neil Armstrong walked. I remember sitting in the basement of our home in Silver Spring, MD, watching it on our giant color TV in that giant wood cabinet. Forty-four years ago this summer. Wow.

The Sea of Tranquility, and more

For some reason I see more barred owls at Pony Pasture than any other bird of prey. More by a very large margin – it must just be right for them. I see them every year, always near the parking lot. Evie and the dogs and I were walking back to the car this morning and this one swooped right over our heads. And landed in a tree right next to the trail! Fun picture:

They sure do look wise. I’ll be the first to admit. But cute too, for certain.

In 1992, my Dad turned 57. He was healthy and happy and so were we. But he wrote a “Letter of Instruction” that was to “make clear my wishes and intentions for the end of my life.” What followed was six single spaced pages of my Dad’s inimitable style of communication, leaving zero to chance. He signed it “with all my love, always,” Warren M. McLaughlin, also known as “Mike” & “Dad” and the “D” in “Dad” had a smiley face inside it. This ceremony, like the one at Rescue 15 in Bridgewater the week after he died, went off without a hitch – as he intended. A lot of his and Mom’s friends were there, and many of our friends, and all of his grandchildren – it was a fine time. I’m writing all this perhaps to explain why eighteen people who loved someone are at his funeral – smiling from ear to ear.

Some of Mom and Dad’s friends from Bridgewater were there, and their friend Becky from Rescue 15 gave us a beautiful photo album. She sent 68 (!) fantastic pictures and I didn’t even notice she had a camera! My Dad was a retired commander in the US Navy and his funeral was at Arlington National Cemetery. He was cremated (his wishes were explicit) but they use a casket anyway. I never pictured a funeral as an enjoyable experience, but Dad went to great lengths to make it that way, and wow. There it was.

Here’s a phrase Dad wrote in his Letter of Instruction over twenty years ago: “c. Honors: Talk this over with Katie [my older sister] and anyone else who might bring children. IF weather is decent, and IF grand (or other) children will be there, I want “Full Military Honors” complete with horses, caisson, band, etc.” At the time he wrote that, he had one married child and two grandchildren. One was three years old and her sister was not yet a year old. As a result of Dad’s two decade old instructions we had this: 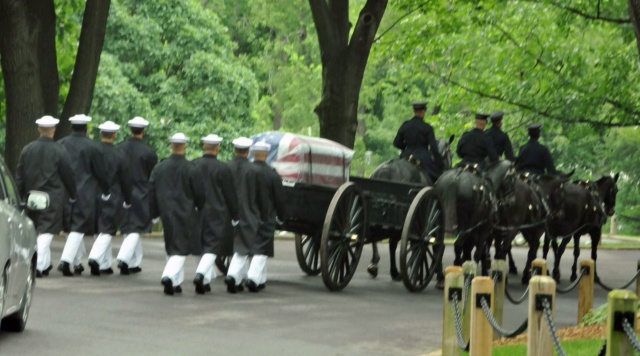 Note the horses, caisson, etc. The band was on the side. 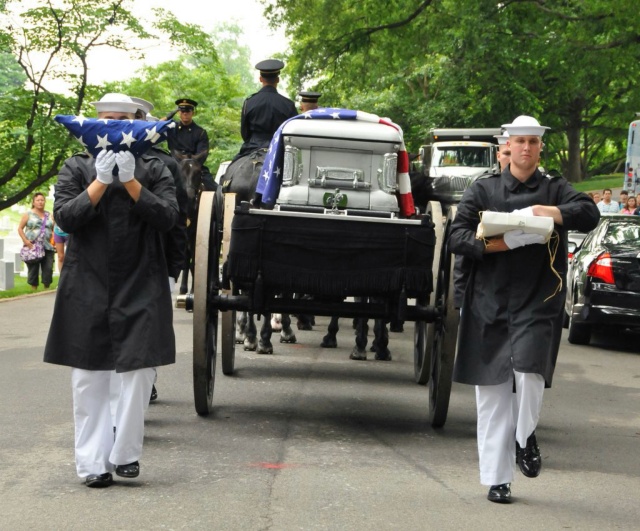 And because Dad was Dad, we had this. I won’t list each of the eighteen people in the picture. But it’s my Mom, my two brothers and two sisters, all of our significant others, his five granddaughters, his cousin Neil, and our friend Shane. Our friend Shane baptized Kevin in 1965 – and conducted Dad’s funeral. As requested, unsurprisingly, in Dad’s 1992 letter of instruction:

That picture is worth about a TRILLION words. I’m wearing a tie of my Dad’s. For those of you who have never seen me in a tie.

This post veered a bit after I began writing. I feel the way I felt at his funeral – it’s hard not to smile. Boy did that ever work out the way he planned it.

I am a rehabilitation counselor. I have many friends with autism and traumatic brain injuries. They help me learn new things constantly. I hike with dogs at the James River in Richmond - a lot. I've completed an Iron distance triathlon a year for 11 years. My most recent was in Wilmington, NC in November, 2013. I currently compete in mid-distance triathlons. And work and hike and take pictures and write and eat.
View all posts by Jay McLaughlin →
This entry was posted in Fun, People, Smiles (including "dog smiles"!). Bookmark the permalink.

10 Responses to Summer and more (a lot more)