Every living thing – the prequel

Posted on December 7, 2014 by Jay McLaughlin

I’m learning about every living thing that’s in Pony Pasture. The biggest are the sycamores (Platanus occidentalis). The smallest are the mosquitoes (Aedes albopictus) (I think). Roughly. Mosquitoes are the smallest thing I’m likely to photograph. In between are whitetail deer, loblolly pines, Canada geese, pawpaw trees, gray squirrels, pileated woodpeckers, multiflora roses, Carolina wrens, White oaks, box turtles, garter snakes, painted turtles, sliders, longnose gars, snails, dragonflies, damselflies, raccoons, honeysuckle, otters, cardinals, robins, blackberries, bluebirds, the list seems endless. But it’s not. It’s only going to go on my list if I can photograph it. A friend used a hidden camera and got a picture of a mink at Pony Pasture – that’s incredible. But I’m not going to put anything on my list until I take a picture of it. I think this will take around a year. A hundred or two hundred different plants at the most. A hundred or two hundred different animals, even counting mosquitoes and snails and cardinals and cormorants and whitetail deer. Toads, turtles, bluebirds, all of it.

I’m going to begin with things there are a lot of and that are easy to find – the ones that are easy to photograph. This (December) is a good time of year to begin. Because there are very few insects. And close to zero flowering plants.

The original title for this post was “When I obsess, I don’t do it halfway.” Hiking at the river Thursday morning I changed it (in my head) to “Every living thing.” It’s the same post though.

I’ve mentioned in earlier posts that I was imagining a page on this site called “ppff” for “Pony Pasture Flora and Fauna.” Which “Every living thing” is also just a different way of saying that. My “obsession” (my most recent obsession) began not at Pony Pasture but at Bryan Park. They have a great list of the trees there. Which of course there is a great deal of overlap between the trees of Bryan Park and the trees of Pony Pasture.

I’ve written too much without pictures on this post. Now a few pictures. This one wasn’t even with my “real” camera, I took it with my phone at the river this morning. There’s a lot of great things about going to the river in December/January and one is how crisp and blue it occasionally looks. It’s so pretty. Feast your eyes: 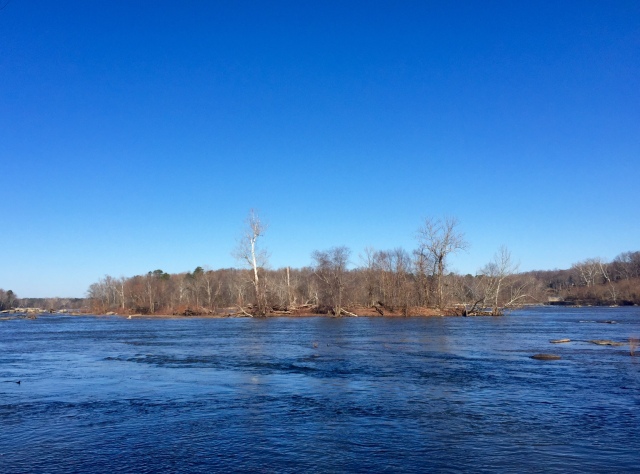 What is not to love about that picture? Stunning.

December sycamore, from the ground up

That’s at the bottom looking up. But those white tops are unmistakable along the riverbank. You can see them from the Willy Bridge, from the Huguenot Bridge, anytime you’re near the river in Richmond. If you’re near a river in the mid-Atlantic region, chances are you can spy a sycamore.

This is only a coincidence, that there were bluebirds this blue morning and I got a picture. I’m only going to put up one of the bluebird pictures that I took. But I was stopped at the edge of a creek talking with a birder friend who was hiking the opposite direction – we crossed paths. I had stopped because there was a big sycamore at the edge of the creek and the top of it was in the sun. And there was a swarm of bluebirds in it. From where I was standing, I could see more bluebirds at one time than I normally see in a month combined. I didn’t even know there were this many bluebirds in that entire park. I’ll bet there were twenty or more. There is no way to photograph that – it would just look like a picture of a tree. So here’s one of them. But it was a fun morning. Blue sky first, blue river at the same time, five minutes hike and a swarm of bluebirds:

The really bitter, bitter long term cold around here (my lips will turn blue) doesn’t ever show up until January. And a few trees still have leaves. But the last of the leaves are going away fast. And there’s a lot more light. It becomes much easier to see, and to photograph – except that the sun sets before 5:00 PM. I was hiking earlier in the week and this Eastern gray squirrel (Sciurus carolinensis) was stopping to fatten himself (possibly herself) up some before the weather gets severe: 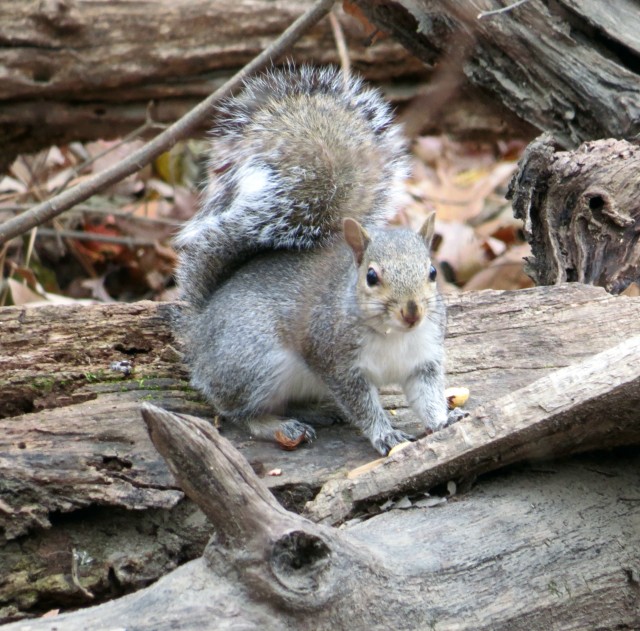 I believe this is not a coincidence – I spotted a Red-shouldered hawk (Buteo lineatus) this week right in the middle of town. Not a coincidence because prey is more and more visible every day. This is not (obviously) in Pony Pasture but Red-shouldered hawks are common visitors there. This one, however, was sitting on the sign at a busy Mexican restaurant at a busy intersection in the middle of town: 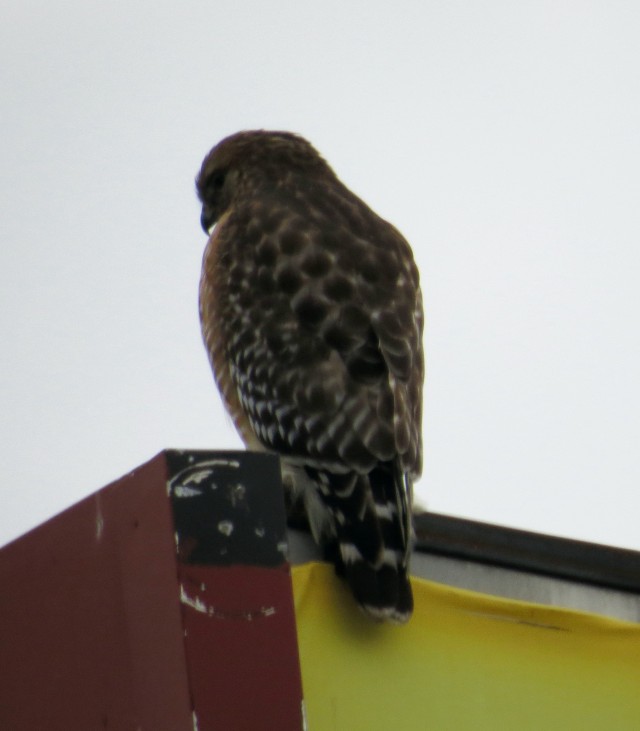 It’s amazing. You should see how urban this spot is. There are SO many cars at this intersection. Incredible.

Here’s a “living thing” that’s currently spending lots of time hanging out at the rapids at Pony Pasture. They’re not a twelve month resident, though. These are Ring-billed Gulls (Larus delawarensis):

Here’s a pair of twelve-month residents – an unmistakable male (green head) and female mallard (Anas platyrhynchos). Not my best picture ever, but they’re always nice to see:

The most predictable – by far – living thing at Pony Pasture is a Canada Goose (Branta canadensis). Everybody knows what they look like. But here’s little handful:

I should be more open-minded. I am not the world’s biggest fan of Canada geese.

American Robins (Turdus migratorius) are in the park year round: 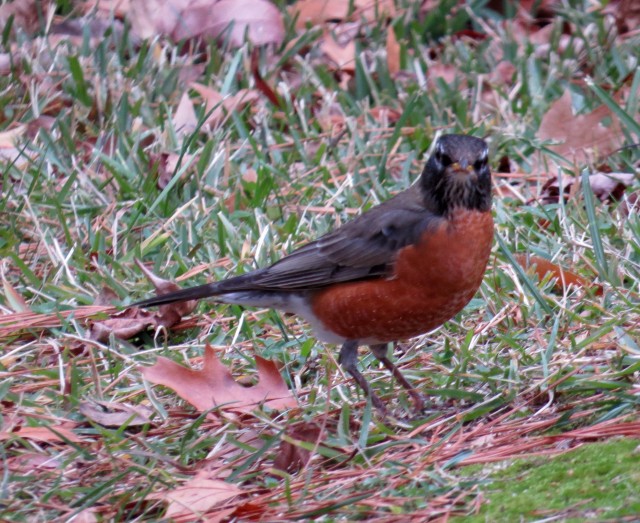 More trees later. But without leaves on them they get pretty non descript. Except of course for those sycamores. The fun thing about the trees for me is, I’m really beginning to notice them now – I never really noticed trees before. I can tell a white oak (that’s mostly what I use for firewood) from a black oak. I can tell a loblolly pine from a longleaf pine. I know there’s a difference between a loblolly pine and a longleaf pine. That’s a lot of the reason I started this “every living thing” project. I just began this week and I’m already learning a lot of things I never knew. So. Have a great week.

But before I go – a quick interlude. Fires in the woodstove is another of my favorite things about this time of year. My friend Tim brings me the wood, and I use my old ax to split up the kindling. “Old” is relative – I got it for Christmas in around 1976, when I was fifteen, from my mother’s mother and father. And when Tim brings me a load of wood, I haul it around to the woodpile in my wheelbarrow that I bought at Pleasants (back then it was Tom Brown Hardware) in around 1995. And I noticed this week for the first time – amazing – the two logos. Here they are – identical!: 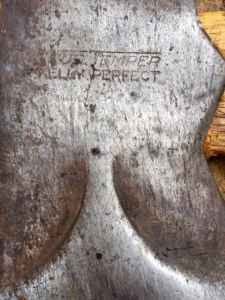 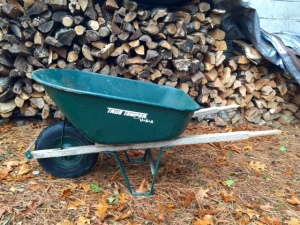 So anyway – with the living things at Pony Pasture – it’s a work in progress. Maybe by this time next year I’ll have them all. Or all the big ones.

Meanwhile – see you next week! I hope! All best,

I am a rehabilitation counselor. I have many friends with autism and traumatic brain injuries. They help me learn new things constantly. I hike with dogs at the James River in Richmond - a lot. I've completed an Iron distance triathlon a year for 11 years. My most recent was in Wilmington, NC in November, 2013. I currently compete in mid-distance triathlons. And work and hike and take pictures and write and eat.
View all posts by Jay McLaughlin →
This entry was posted in Birds, Fun, James River, Rivers, Smiles (including "dog smiles"!), squirrels and tagged bluebird, bryan park, Fun, james river, nature, outdoors, Pony Pasture, Rivers, smile, Smiles - human AND dog smiles!. Bookmark the permalink.

6 Responses to Every living thing – the prequel