What can I say – an uninspired title. I did get a couple of decent pictures this week though. My favorite (possibly a tie) was hiking with Ethan at Bryan Park earlier this week. We saw (and heard) a male Pileated woodpecker (Dryocopus pileatus) hammering on a tree. The light wasn’t spectacular but he was high up and I got three reasonable pictures. Have a look:

Third (and final) male Pileated woodpecker. This was so much fun.

They are by no means rare, and you obviously cannot miss them if you’re around. They are loud. They drum loudly on the trees and their calls are also very loud. They are good, good-looking birds. They’re roughly the size of a crow. There is nothing else like them in Virginia. They’re regulars at Pony Pasture and at Bryan Park. They’re abundant in wooded areas in central Virginia, though. Just listen and look around, you’ll be able to see one. Especially from now through early March, when there are no leaves on the trees.

You have to be really close or have binoculars or a telephoto lens, but it’s easy to tell males from females. It’s easiest to see here in the top two pictures. See at the base of his beak he has a red streak, just below his eye? Only males have that. The only red on a female’s head is on the crest. Incidentally – if you are, like me, interested in birds and the English language, here is where the word “pileated” comes from. According to Merriam-webster.com: “having a crest covering the pileum”

Which of course I had no idea what a “pileum” was, but now I do, from the same source: “pileum: the top of the head of a bird from the bill to the nape”

Speaking of that. I’m gradually wading in to my “Every living thing” project. I’m spending roughly a year cataloging “every living thing” at Pony Pasture – plant and animal. The project is constantly evolving, not just in collecting pictures of “living things” but in how I’m going to organize it. The current loose structure is a link at the top of this page called “PPFF” which stands for “Pony Pasture Flora and Fauna.” You can see a permanent link to it in the black line just under the banner picture at the top of this page. Try it out! Make a suggestion!

As I type the draft of this blog post on the evening of Sunday, December 14, 2014, it has twenty-eight plants and animals. They are currently not in any order. The “common name” is on the left and the “scientific name” or “binomial name” or “Latin name” is on the right. Both are (or will be) hyperlinks. The “common name” link will take you to a blog post with a picture I’ve taken of that plant or animal. The “scientific name” link will take you to a reputable source of information. Often it will be the Cornell Lab of Ornithology for birds or the Virginia Tech Department of Dendrology for trees. BugGuide.net for insects. The Virginia Herpetological Society for snakes and turtles and toads and lizards. Wikipedia is great but this is better.

That being said – a hawk landed on the house across the street – I’m not making that up – from my house this week! And I haven’t ID’d it yet! I think it’s a Red-shouldered hawk because I’ve been seeing them all over town this week. But I’m not confident in that ID. Suggestions and corrections are as always welcome – have a look: 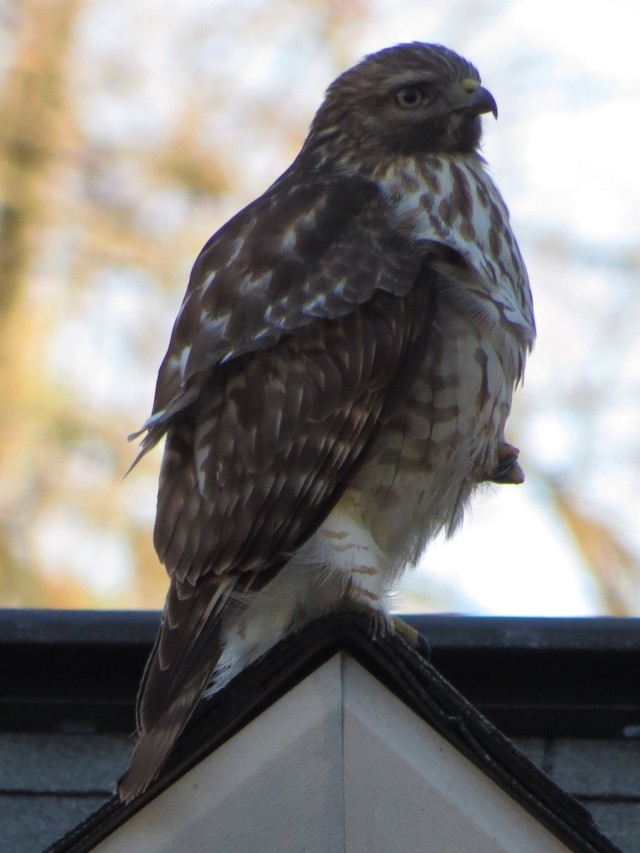 Very literally across the street from my extremely suburban home. I was and am amazed and gratified.

Last week a hawk at a Mexican restaurant, this week one across the street from my house. I love it.

PS – I do not know what that is on his front, just below his breast.

On “PPFF” I have a few species – mostly trees but one turtle – that don’t have pictures on this blog yet. So I’m going to insert a handful this week to start. There are few to zero leaves on the trees in mid-December, and next to no fruit (acorns and walnuts and so forth) but I’ll get some bark and other pictures up. More as the trees leaf out in March and April and May.

When identifying trees at Pony Pasture, one tree stands out for its bark. It’s called the River Birch (Betula nigra) and this picture came out well:

I’ll also put in a Loblolly pine (Pinus taeda) – one of the commonest pine trees in this area. A picture of the trunk and bark with dog leashes for scale, and one of the needles and cones. If you’re just looking at trees for the first time, most hardwoods in our area are “deciduous” and their leaves fall off once each year. Pine trees are “coniferous” – they have cones! They’re also called “evergreens” because they’re green all year round.

The bark and trunk of a Loblolly pine, with dog leashes for scale. This one is medium-large.

I pointed my camera up at the top of that tree. This is what the needles and cones look like:

Needles and cones of a Loblolly pine

I believe that’s enough for the time being – forgive me if this has been dry. I’ll close with a picture two of my favorite domestic animals at Pony Pasture. And have a great week!

PS Please take a few minutes – if you have any free – to look at the “PPFF” page. And please suggest any revisions or additions or any other improvements that might come to mind. Because this is a work in progress in the truest sense of the word and it would be great to have some help. Suggest away!

Two of my three boys (the only two that go to Pony Pasture):

I am a rehabilitation counselor. I have many friends with autism and traumatic brain injuries. They help me learn new things constantly. I hike with dogs at the James River in Richmond - a lot. I've completed an Iron distance triathlon a year for 11 years. My most recent was in Wilmington, NC in November, 2013. I currently compete in mid-distance triathlons. And work and hike and take pictures and write and eat.
View all posts by Jay McLaughlin →
This entry was posted in Birds, Dogs, Fun, James River, Rivers and tagged Dogs, Fun, james river, nature, outdoors, Pileated Woodpecker, Pony Pasture, Rivers. Bookmark the permalink.

1 Response to Birds and trees