When I began my Every living thing section in December of last year, I documented many of the most beautiful animals and plants in Pony Pasture. This morning I got my first… slug: 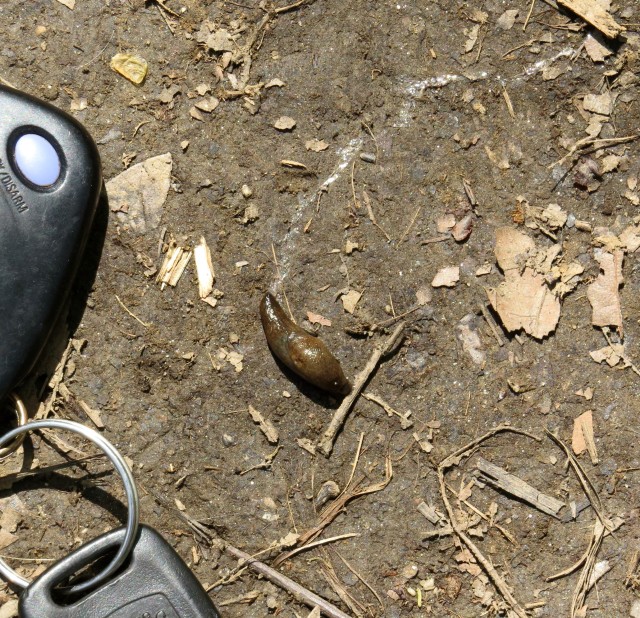 As of today, all I can tell you is that’s a slug. Embarrassingly, that’s all I can tell you. It’s a living thing. It’s an animal, not a plant. I first thought they were insects; they’re not. They’re terrestrial gastropod molluscs. Sycamore trees and Whitetail deer, the signature flora and fauna of Pony Pasture, you can’t miss. When you get down to slugs, it’s getting a little challenging to identify. I’ll get to it though.

Here’s a member of Pony Pasture Fauna that is easier to identify. And it’s a first for my list and blog page! Vocabulary and a warning first. The vocabulary word is “ophidophobia,” or fear of snakes, “possibly the most common subcategory of herpetophobia, or fear of reptiles.” To give ophidophobes a moment to avert their eyes, I’ll first post a less anxiety producing reptile photograph – and another first for this blog. What the heck, a new (for some) vocabulary word too – the bottom of a turtle’s shell is called a plastron and I got a picture of one on Monday! 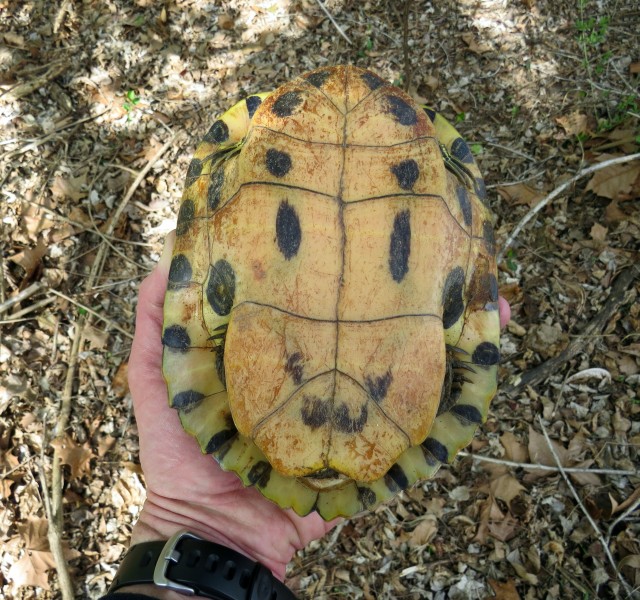 We’re more used to seeing the top, or carapace. This is what the rest of the as-yet-unidentified turtle looked like. I believe it’s a male, based on his long claws. My friend Kim was surprised I was able to catch him. We surmised he must have been moving slow due to the still cool weather. Pony Pasture is on the south bank of the James River. The south bank stays cooler longer than the north bank. In Chinese philosophy, when you learn about “yin and yang,” the “yin” is represented by the south bank of rivers because it gets less sunlight. Not that that has anything to do with turtles. But the south bank gets less sun so the turtles warm up slower – so you can catch them! Here’s the rest of the turtle:

Male turtle (long claws) slowly warming up on the south bank of the river. His carapace appears to be resting on his forehead. That’s of course just an illusion.

When I was looking for that definition I found an old favorite poem of my Dad’s, which I will include here for all of our edification (another favorite word of Dad’s):

Which practically conceal its sex

I think it clever of the turtle

In such a fix to be so fertile.

Dad liked to quote Ogden Nash. More on that in a future blog post.

May apple plants are out; the “apples” themselves are not visible yet. Soon, though:

Another perennial favorite of mine is beginning to appear, pawpaws (asimina triloba). As summer wears on, they will leaf out and dominate the understory at Pony Pasture. Currently they’re just brown buds: 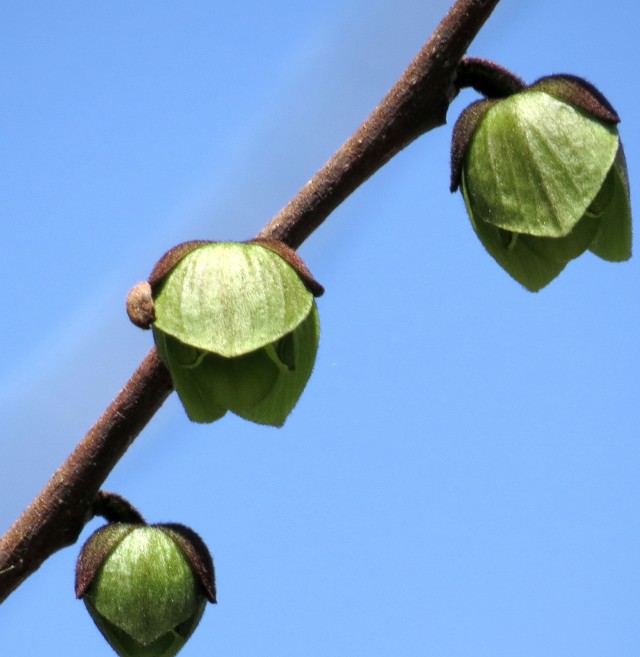 I’m embarrassed again (though not so embarrassed I won’t post it) to put up yet another picture of an unidentified plant. A moss, this time. They’re budding and this is such a pretty picture:

Isn’t it remarkable that’s moss? I’m finding so many examples of things that look so different in a photograph as to become nearly unrecognizable. It’s fun.

Anyway, snakeophobes, a.k.a. ophidophobes, I warned you, this is where the rubber meets the road. In a manner of speaking. This is a snake so harmless it’s actually beneficial. That’s true of most snakes. But this is (I believe) a Northern Black Racer. But I have not yet received confirmation so Kim or Betsy or Katie or whoever, put a comment on here or shoot me a note and I’ll correct it. Hope you can do it from the head only although I have body pictures if you need one:

Snake preparing for a swim

It was about three feet long and slender, and the water there was ten feet wide and a couple of feet deep. And that snake went straight into the water and swam to the other side like it was part fish.

Two more quick pictures then it’s off to bed – got started much too late. The first is a fiddlehead fern. But “fiddlehead” is not a type of fern. It’s a growth stage. This is a Christmas fern or something I have not identified, but this is referred to as its “fiddlehead” stage. You can see why:

Fiddlehead fern. I am continually amazed and delighted at how gorgeous this all is.

Very late in the hike, nearly within sight of Charlie’s Bridge, I always check for deer and they’re nearly always there. Today was no exception. It gets leafier every day and more difficult to see. There was at least one doe in there. Possibly more; I only saw this one beauty. I played around and got some shots but none worthy of publication. But see what you think of this one. They are effortlessly (in my opinion) graceful and elegant animals. They blend in so beautifully with their surroundings. This is her elbows. I love this picture. And I hope you have a great week: 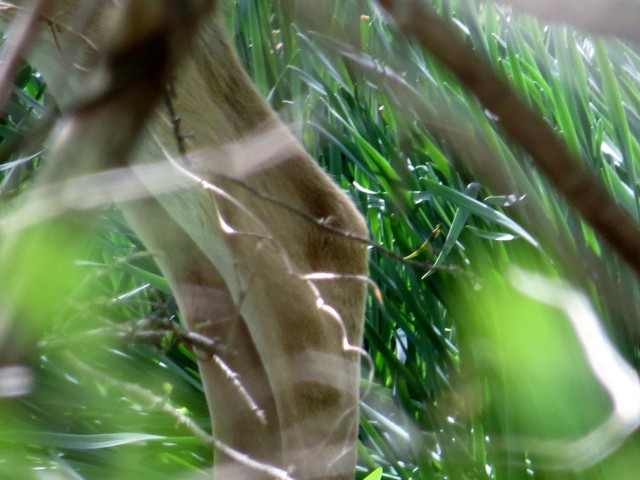 Nice elbows. She is a natural beauty.

See you next week,

I am a rehabilitation counselor. I have many friends with autism and traumatic brain injuries. They help me learn new things constantly. I hike with dogs at the James River in Richmond - a lot. I've completed an Iron distance triathlon a year for 11 years. My most recent was in Wilmington, NC in November, 2013. I currently compete in mid-distance triathlons. And work and hike and take pictures and write and eat.
View all posts by Jay McLaughlin →
This entry was posted in Flowers, Fun, James River, Pony Pasture, Rivers, Smiles (including "dog smiles"!) and tagged Flowers, Fun, james river, may apples, moss, nature, outdoors, pawpaws, turtles, virginia bluebells, whitetail deer. Bookmark the permalink.