As my “Every living thing” project evolves, some if it is fascinating and some of it (possibly you’re painfully aware) is boring. This is not what I was referring to, but I was ten feet from this male Pileated Woodpecker (Dryocopus pileatus) for over ten minutes while I watched him dismember a rotten log:

That was never boring – it was only fascinating. But I was so close I had to stand still as a statue because I didn’t want to scare him away. I’d been photographing turtles (more boring than it sounds, and it sounds boring) and standing quite still. I had dark clothes on and blended in with the background and I was standing on the dogs’ leashes. He swooped in and landed almost at my feet. It was a cool experience. If you’ve looked at any other blog posts where I’ve posted pictures of Pileated Woodpeckers, perhaps you’ll remember this. You can tell this guy’s a male by that red mark just below his eye. Females are otherwise identical except it’s black right there.

I am the world’s worst videographer. Maybe by next year at this time I’ll be better. But I was standing there with my lens cap off and the bird wasn’t leaving so this is my first video (don’t get your hopes up). It only lasts 17 seconds. About 9 of the seventeen are cool: Pileated woodpecker at Pony Pasture

I was also fortunate to get a good look at a Barred Owl (Strix varia) this week. This was in Pony Pasture just before the big footbridge:

Barred owl at Pony Pasture. A Barred owl can tell a male from a female – I, however, am unable.

Assuming (perhaps incorrectly) you’re not already bored, let me get to the “Fascinating / boring” part of the post. “Every living thing” is fascinating – until it’s not. But this week, in pursuit of more knowledge for this project, I finished reading my second consecutive non-fiction book about trees in the mid-Atlantic region. Of all the trees I’m learning about, Loblolly pines (Pinus taeda) may get (or may have gotten) my vote as least fascinating. But if you live in the Richmond, VA area and you go anywhere today, you’ll probably see one. They’re generally tall and gangly and have zero branches anywhere near the ground. If they’re 8” or a foot thick, there’s not a branch closer than thirty feet above the ground. But look up – they’re thick with needles. Here’s a picture of loblolly pine needles – followed by an explanation of why I find it “Fascinating / boring”: 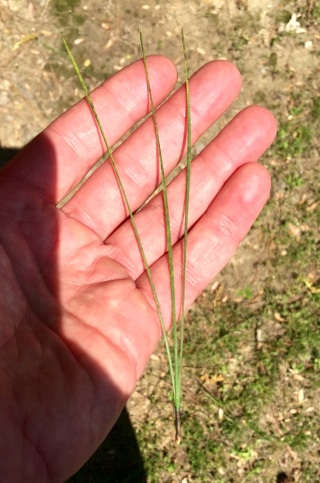 The three needles of a Loblolly pine.

When you look up at Loblolly pines and see all those needles, almost every single one of them is in a clump of three needles just like that. Not of one, not of two or four or five or six – they’re all in clumps of three. Wherever you see a Loblolly pine, wherever you go. I would have lived my entire life – rest assured – and never known that. It’s fascinating, because it seems so unlikely, but it doesn’t change anything, so it’s kind of boring. It’s also fascinating because it makes me wonder what else I don’t know.

Two weeks ago (April 12, 2015, Feeling sluggish) I posted a picture of a May apple  (Podophyllum peltatum). Back then it was just the leaves. The flowers are out now. I’m sure somewhere there’s a picture of one in bright sun. But they grow in shade and this is the brightest I could find: 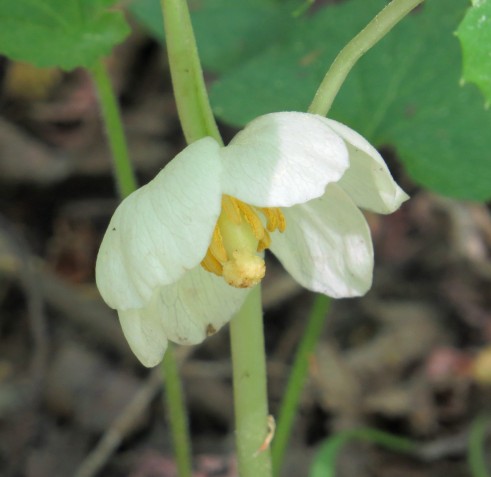 And speaking of flowers in April in central Virginia, the Flowering Dogwood (Cornus florida) is the state tree and flower of Virginia. My Dad loved dogwoods. Several grew naturally in the woods in front of our cabin when we were younger. Our Dad had us pulling honeysuckle and English Ivy out of those trees beginning around 1975. I just searched on the Google Ngram Viewer, which tracks the frequency of word use in the English language beginning 1800. The expression “invasive species” appears precisely zero times before 1995. In hindsight, I will always wonder how my Dad managed to “see around corners” into the future. I guess he just saw this nasty vine tearing down his beloved dogwoods and wanted it to go away. No magic involved.

Another stunning (and fragrant) April flower is growing in my yard – this beautiful Lilac (Syringa vulgaris). This picture is actually from last week. This bee discovered it the same time I did: 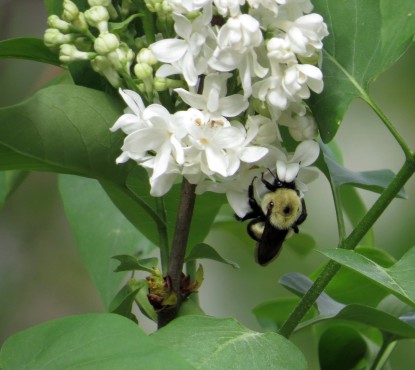 If I was that bee I would never want to leave.

I didn’t put this picture in last week because I ran out of room. Also because I haven’t yet identified it. But this is a great looking mushroom:

My friend and mentor Betsy has suggested four plants for me to find at Pony Pasture (see All means all) and last week I had two of them. This week I found a third, this delicate and comely Star chickweed (Stellaria pubera). 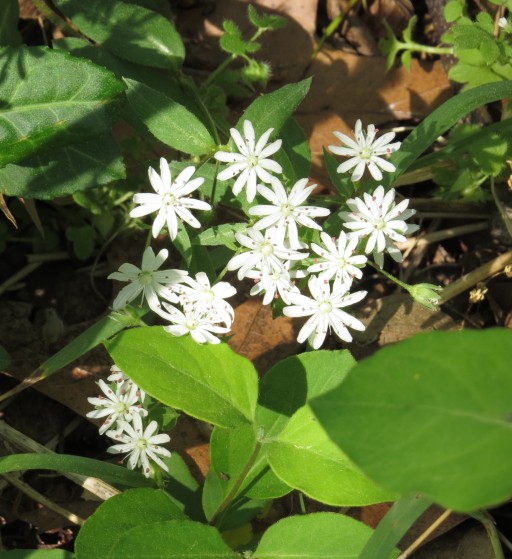 This suggests another item that is (in my view) fascinating/boring. At first glance (if your first glance lasts longer than e.g. 0.001 second) you’ll notice that each flower has ten petals. That’s what I noticed, anyway. Then I read about the plant. And the truth is, those flowers each have not ten but five petals – they’re “V” shaped or “U” shaped. See how (okay, maybe this is just me) that’s fascinating and boring? As in, you could go for your whole life and never know that, and it wouldn’t matter at all. So it’s sort of boring. But now we know something we would never have known. And every time we see that, we’ll know something we didn’t know. To me that is undeniably fascinating.

Anyway. The Spring migration is still on. I have not yet seen any Cliff Swallows (Petrochelidon pyrrhonota) underneath the bridge near Brown’s Island. I saw them last year for the first time during May so hopefully they’re still on their way north from their winter roosts in South America from Venezuela to Argentina. Purple Martins (Progne subis) have arrived at Bryan Park. I haven’t gotten any pictures I’m proud of but here’s one that’s adequate. There are two females (lighter) and one male (dark); he’s slightly in the background and slightly ruffled. I talked with the guy who built the Purple Martin house. This is at Bryan Park – filled with raptors. He said last year a Cooper’s Hawk (Accipiter cooperii) had been perching there and taking babies out. Red in tooth and fang, right? Yikes. So this year he put in a double wall of wire. The Martins flit in and out while you watch:

Three Purple Martins perching on a house at Bryan Park.

I hope you’ve enjoyed this week – and I hope you’ll come back next week! All best,

PS – This just in – I wrote all of the above last night and early this morning when it was raining. It cleared up around noon so Evelyn and Mackey and Turner and I took a muddy but pollen-free hike at Pony Pasture. We were rewarded (not everyone would agree) with having a flock of seven or eight Turkey vultures (Cathartes aura) land in the trees while we were walking through the Wetlands. None of the images were brilliant but this one is ok. Plus a few minutes later Evelyn noticed a millipede. Or a centipede. More Pony Pasture Fauna! I haven’t figured it out yet but I posted it on BugGuide.net a few minutes ago. I’ll post it on “Pony Pasture Fauna” when they let me know. First the vulture, then the insect.

Turkey vulture in the forest on a Sunday afternoon.

Centipede or millipede Ev pointed out this morning. That’s the toe of my shoe in the bottom of the frame.

I am a rehabilitation counselor. I have many friends with autism and traumatic brain injuries. They help me learn new things constantly. I hike with dogs at the James River in Richmond - a lot. I've completed an Iron distance triathlon a year for 11 years. My most recent was in Wilmington, NC in November, 2013. I currently compete in mid-distance triathlons. And work and hike and take pictures and write and eat.
View all posts by Jay McLaughlin →
This entry was posted in Birds, Flowers, Fun, Insects, James River, People, Pony Pasture, Rivers and tagged barred owl, bryan park, Flowers, Fun, james river, nature, outdoors, Pileated Woodpecker, Pony Pasture, Rivers, smile. Bookmark the permalink.