We wore shorts when it snowed

It’s difficult to recall the feel of a snowy winter this year, but it will be cold soon enough. I have my own wood stove burning here in Richmond to keep the chill off on this wet December evening as I type these words. The wood stove always calls to mind frigid winters at the cabin when I grew up. I’ll post a few pictures I’ve taken this week and get back to that.

I hope your Christmas was excellent; mine was outstanding. Our family got together earlier this week since we’re spread everywhere. So Christmas Day I got up and took the dogs to the river to celebrate. Mackey and Turner and I stopped by to visit our friend Yuki so he could join us. Here’s a picture of the three of them on Christmas morning. Yuki (the white dog) is bounding out of the river on the left. Turner is at the water’s edge not far behind him in mid-leap. Mackey’s the black shape in the water next to Turner; he enjoys life at a more leisurely pace: 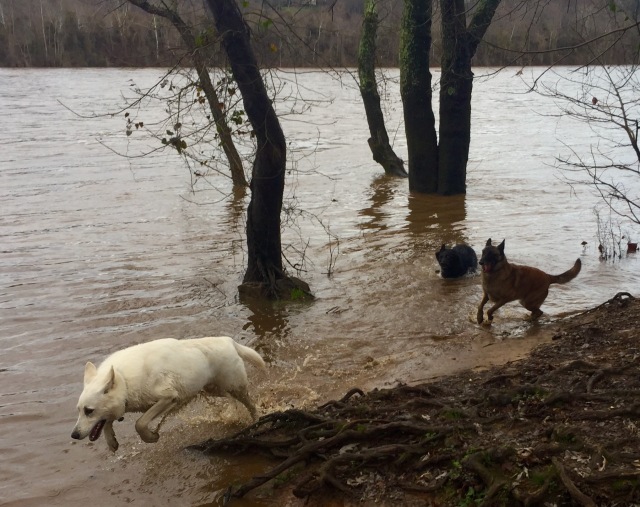 Here’s a picture of the three of them as we got on the trail that soggy morning; they enjoy themselves no matter the weather: 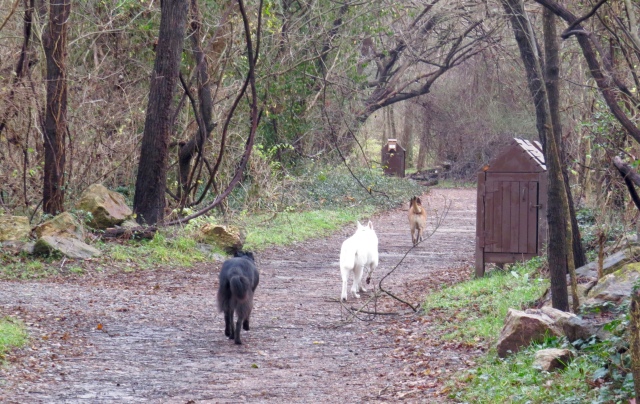 The hike begins on a dreary Christmas morning (Turner in front, then Yuki, Mackey bringing up the rear

This is Yuki on the hike; he gets up ahead then always comes back to check up on me. He is a canine super model: 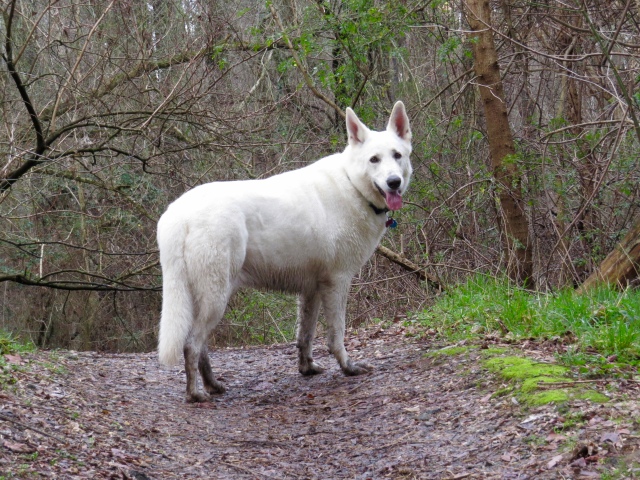 Always makes sure I’m keeping up

I took this picture precisely an hour later when we dropped him off at his house; he’s an only child and he didn’t want Mackey and Turner to leave!:

As a photographer, it’s just fun to point your camera at a dog like Yuki. Look at that guy!

This morning (Sunday) the three of us were back at the river again. They had another hard run/swim so by the time we’d gotten back to “deer territory” they were much less energetic. This is the three of them at the water’s edge earlier; the sun finally came out: 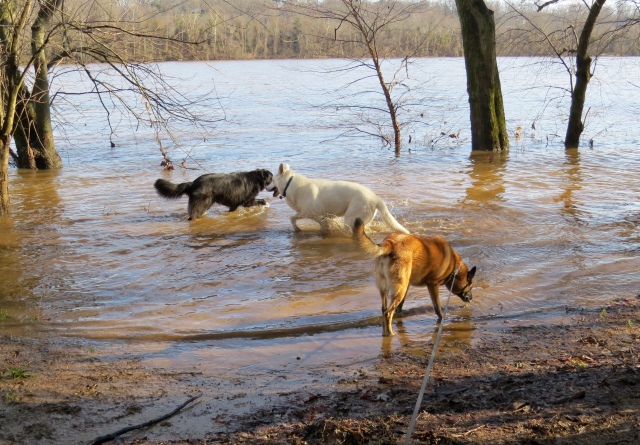 It was so nice to see the sun again

We could see one deer clearly as soon as we got to their area; they’re always in that space this time of year. This time I stood and watched the single deer for a few minutes. Then one stood up on either side of her. They probably see more dogs than they do other deer. This was my favorite picture from this morning: 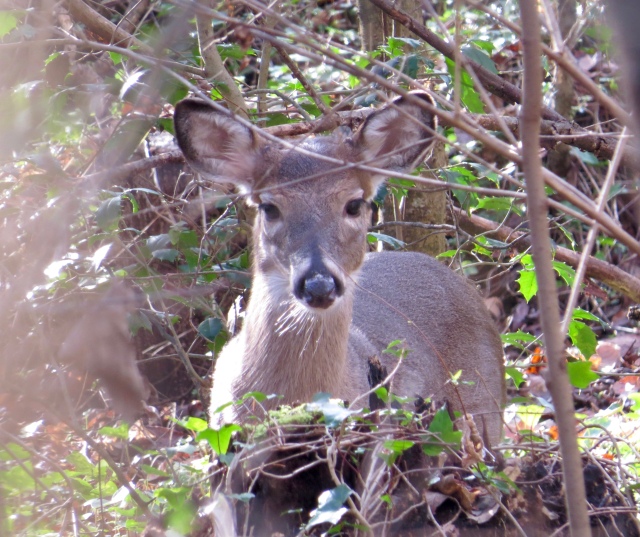 I never get tired of looking at these beauties

Evelyn is my #1 editor and she’s out of town today so if there are more errors than usual, that’s why. She’ll be back soon but not before I post this. Next week though!

We wore shorts when it snowed

Our cabin was perched on top of a steep, forested hill close to the Shenandoah River, half an hour south of Luray Caverns. The cabin faced west and the front wall was dominated by a pair of sliding glass doors, opening out onto the deck. I recall waking up there winter mornings to see snow drifted a foot deep against the glass. Our heat source was this stove; I regret I don’t have a picture of it with a fire blazing inside: 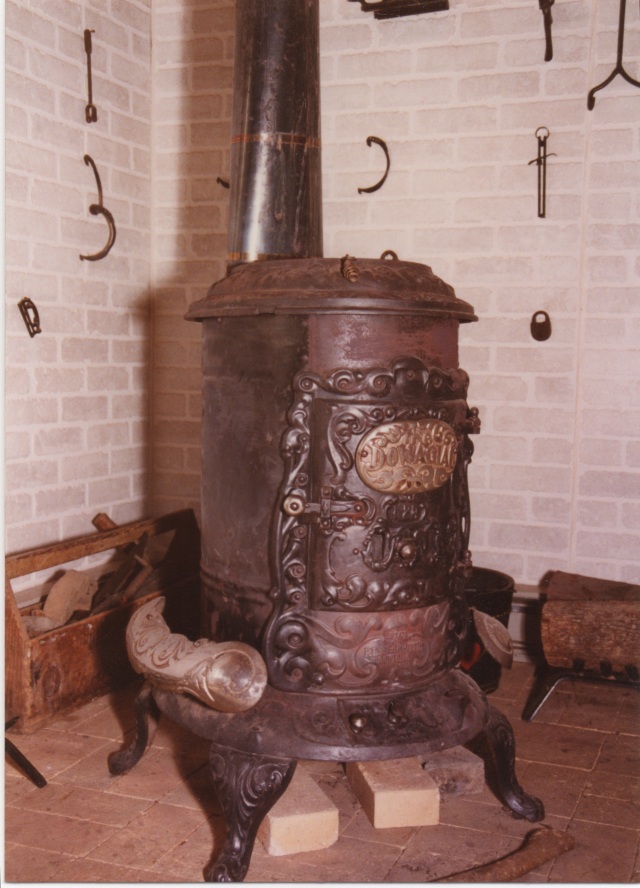 The wood stove at our cabin in the summer. 2 bricks underneath for foot warmers in the winter.

The cabin was small and the stove was large and so was our pile of firewood. My dad was un-fond of this, but as kids we liked to build the fire up so hot that you could wear shorts indoors when outside was a true winter wonderland. It was fun and easy to have it 85º indoors while it was 25º outdoors. We cut and split all the firewood ourselves and we enjoyed doing it. It was fun then and it’s fun now.

It’s ironic, looking back, that I almost never even wore shorts in the summer but it seemed like a great idea when it was snowing. Go figure.

The cabin didn’t have a ton of creature comforts – it was relatively bare bones. No running water, no television, no telephone. But it was always warm in the winter. Plus there were enough books and magazines to reach to the moon and back, twice. 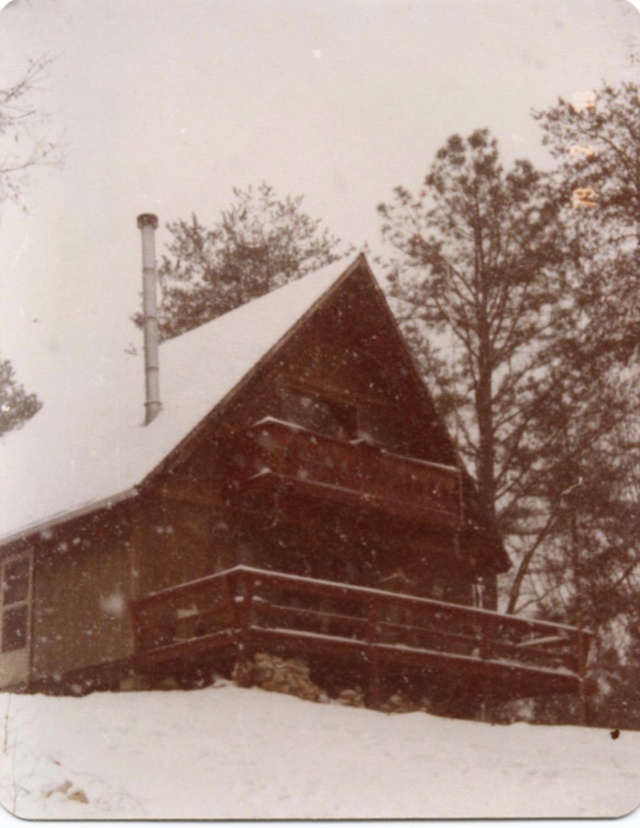 The cabin in light snow. See the chimney for the stove? And the front deck?

For next week I’m thinking of flashlights. Flashlights that we loved to have but took perverse satisfaction in walking around at night without turning them on.

Merry Christmas, Happy New Year, I look forward to seeing you in 2016!

Oops! I almost put up this blog post with no hawk picture. I took several in the last full week of 2015. Next week I hope to have my first of 2016. Here’s one I took this week: 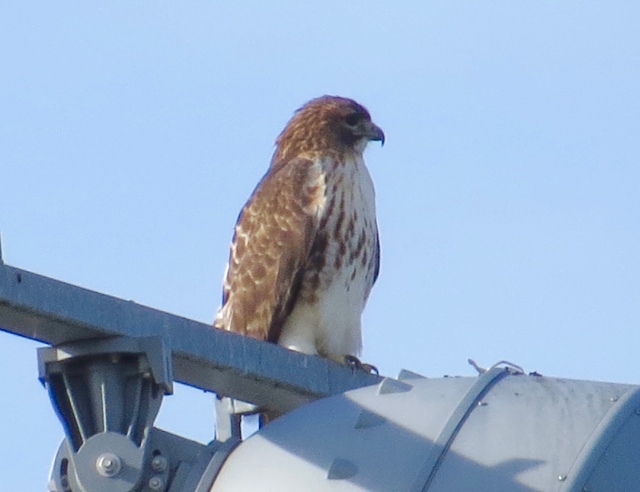 I am a rehabilitation counselor. I have many friends with autism and traumatic brain injuries. They help me learn new things constantly. I hike with dogs at the James River in Richmond - a lot. I've completed an Iron distance triathlon a year for 11 years. My most recent was in Wilmington, NC in November, 2013. I currently compete in mid-distance triathlons. And work and hike and take pictures and write and eat.
View all posts by Jay McLaughlin →
This entry was posted in Dogs, firewood, Fun, Rivers, Shenandoah River, Shenandoah Valey, Smiles (including "dog smiles"!), whitetail deer and tagged Dogs, Fun, james river, nature, outdoors, People, Pony Pasture, Rivers, smile, Smiles - human AND dog smiles!, whitetail deer. Bookmark the permalink.

2 Responses to We wore shorts when it snowed