We turned our flashlights off after dark

Remembering the odd nature of wearing shorts when it snowed called to mind other backwards-ness of my childhood. I’m including a brief blurb about it at the tail end of this post. As I so often do, I’m off to a late start on this post. So it’s abbreviated.

I haven’t taken a million pictures this week but I got a couple. This post includes the final four days of 2015 and the first three of 2016. My photographic talents have settled steadily at the level of “earnest amateur” and that’s comfortable. I’m not as comfortable photographing landscapes or panoramas but sometimes I see the sky on pretty days. This was Tuesday (28 December) evening almost precisely at sunset, just across the street from my house. I “got” a pair of hawks that morning, but I’ll save them. Look at this sky: 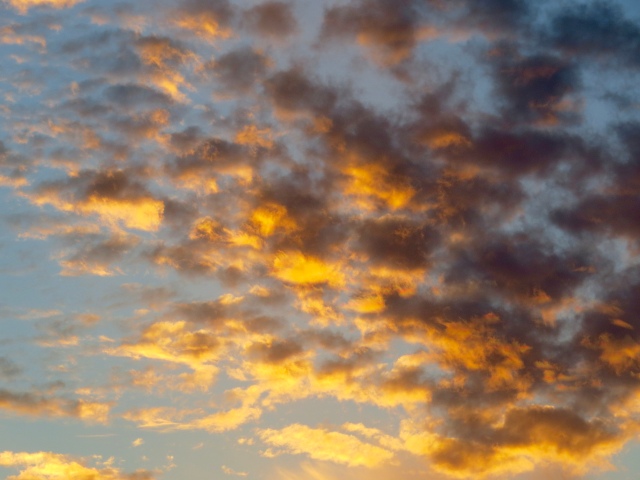 I was at Bryan Park a few hours earlier with my friend Ethan. A squirrel was perched on a branch, “giving us the eye” (in a manner of speaking): 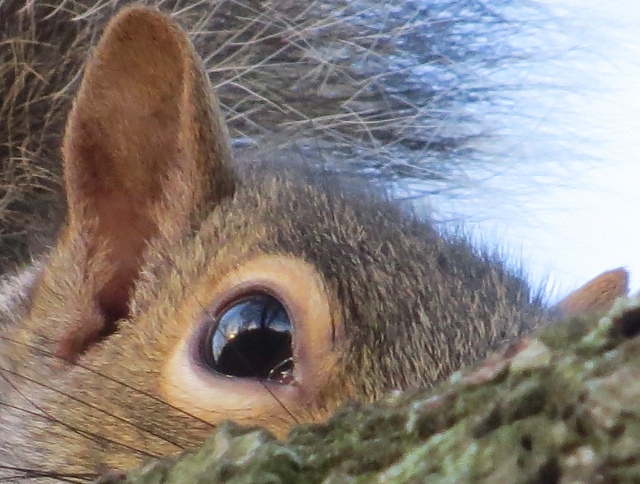 I’m gonna’ keep my eye on you…

The next afternoon my friend Clark and I were downtown near Brown’s Island, watching for trains. We got lucky; it’s been some time since we’ve seen a “double”. Both of these trains are parked; if you’re a train nerd that’s obvious because the headlights are off. We could only see three of the four total locomotives. All three were 4,400 horsepower, and I’m sure the fourth was as well. Both pairs of locomotives had lines of loaded coal hoppers stretching behind them around the bend. Normal trains in that spot have around 100 cars each, and each of those cars has 100+ tons of coal. These trains go to Newport News and the coal goes on barges; I don’t know where it’s bound. Neat to see the trains idling in the fog: 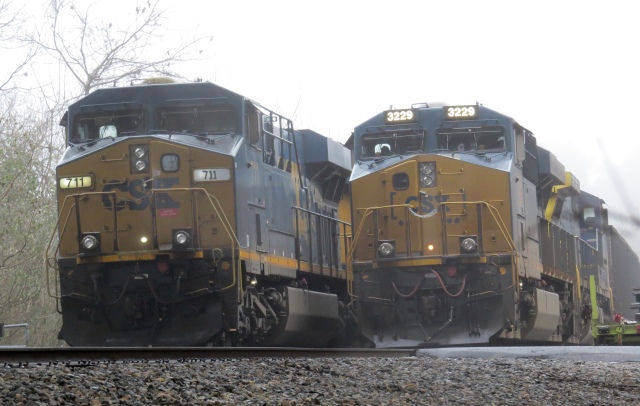 The front end of tens of thousands of tons of coal. On a foggy December afternoon.

It’s been a damp, damp December, and things that like damp weather proliferated. I got some firewood out to split and this handsome snail was ambling across a log:

I took hawk pictures daily for the last four days of December, and on January 1 they’d vanished! January 2 I was on my roof cleaning the chimney. I looked across the street at the trees in my neighbor’s backyard and saw a familiar shape. I wasn’t entirely certain until I zoomed in and got this ¾ angle image of my first Red-tail for 2016. That also makes my first Red-tail for January, marking my ninth consecutive month with Red-tails in our neighborhood. I’ll keep watching: 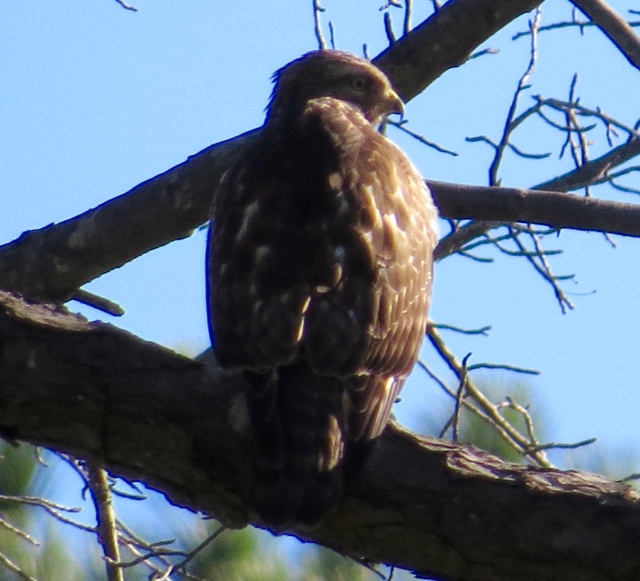 Neighborhood Red-tail on a new perch:

The same day Evelyn and I decided to take advantage of the good weather to walk to one of our favorite sandwich shops, the Shore Dog Cafe at the corner of Forest Avenue and Ridge Road. It’s almost a four mile round trip, just right for working up an appetite then walking off the meal. It was a sparkly early winter day and not too cold and I brought my camera. I didn’t get a million great pictures – none, to tell the truth – but I got a couple I enjoyed. This is a male Downy woodpecker; this angle doesn’t show the red spot on his head but it was there: 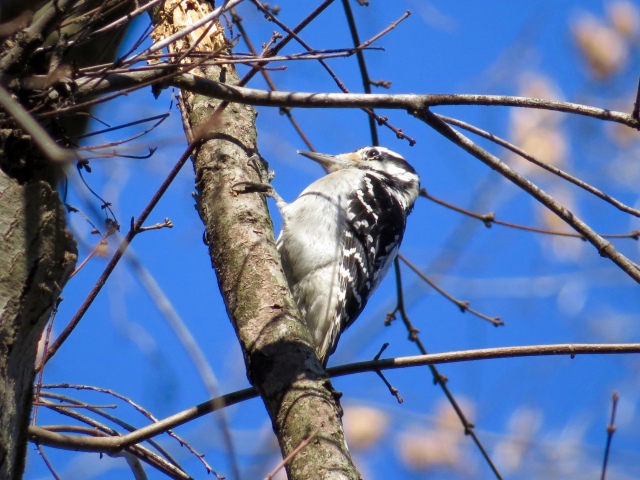 A block or two later this mockingbird was sunning itself in a bush: 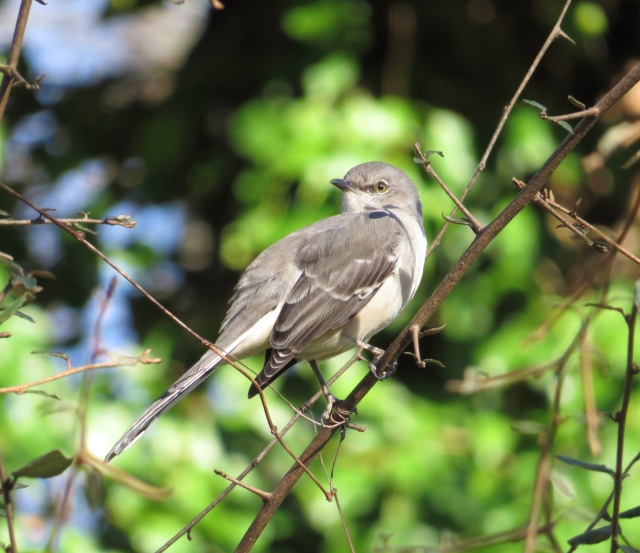 Mockingbird in the sun

I’m not in love with this final picture, but I enjoyed the green and the water and especially the finely detailed shadow on the sand at the creek bottom. The woodpecker and the mockingbird and this lovely fern and creek were all on our walk between Shore Dog and the house: 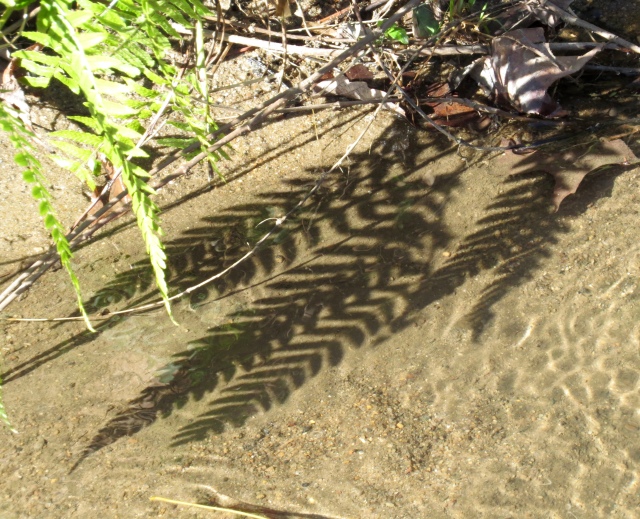 Fern shadow on a creek bottom

I hope you’ve enjoyed these! And this story! And your New Year!

We turned our flashlights off after dark

My memories of our family camping begin early – long before we had the cabin (~1974) or went to summer camp (around the same time). We always had flashlights  – there was no such thing as too many. I still have flashlights – a lot of them – in many varieties. When we were young, it was fun to have giant flashlights with lots of batteries. This was before there were even alkaline batteries, and the flashlights would stay bright for a very short time then gradually dim. There are flashlights now – I have several – that are smaller than one battery from one of my old flashlights. And they’re brighter, and they last longer.

But it didn’t matter how bright they were or how long they stayed bright. Because between nights at Camp Waredaca and nights at the cabin, it became a point of pride to keep our flashlights turned off as much as possible. Never turning them on at all was ideal. We’d never go without a flashlight – perish the thought – but the way to make a really cool flashlight about ten times cooler was to carry it around but never turn it on. You could be inside and turn all the lights out and turn your flashlight on to show everybody how excellent it works – then turn it off the moment you went outdoors.

When our Dad died three years ago, at his memorial service, we displayed a ton of his old flashlights. Because love of flashlights (a subset of love of gadgets) is another trait (or quirk) that we picked up from our Dad. I may expand on this in a future post – there’s a whole little universe of quirky habits we picked up from Dad. Turning them off after dark – I think that started with our generation. But flashlights were one of Dad’s things from the very beginning, and they’ve stayed with us. We save a lot on batteries!

I am a rehabilitation counselor. I have many friends with autism and traumatic brain injuries. They help me learn new things constantly. I hike with dogs at the James River in Richmond - a lot. I've completed an Iron distance triathlon a year for 11 years. My most recent was in Wilmington, NC in November, 2013. I currently compete in mid-distance triathlons. And work and hike and take pictures and write and eat.
View all posts by Jay McLaughlin →
This entry was posted in Birds, Bryan Park, coffee, Dogs, firewood, Fun, mockingbirds, raptors, Red-tailed hawks, Rivers, Smiles (including "dog smiles"!), squirrels, sunsets, Trains and tagged bryan park, Dogs, Downy woodpecker, Fun, GE AC4400CW locomotive, james river, nature, Northern mockingbird, outdoors, People, Red-tailed hawks, Smiles - human AND dog smiles!, transportation. Bookmark the permalink.

5 Responses to We turned our flashlights off after dark