For a visit! From one of my two brothers and one of my two sisters, plus spouses, I think the last time this happened there was a total solar eclipse. Not really, but people seem to like visiting a lot more since Evelyn lives here than they did before. Go figure. I’m happy to see anyone in my family any time. We went to lunch at Shore Dog, I recommend it any time, with guests or without. Straight from Shore Dog to Arts in the Park, it was an excellent way to spend the afternoon together.

Except for the surprise visit from my siblings, the week’s been uneventful. Even by my standards, and my weeks are normally not eventful.

I photographed my first Red-tailed hawk ever one year ago today, on May 1, 2015, at the end of my street. I haven’t seen one here yet this year, but if you’ve followed this blog you know how eagerly I’m watching other birds. Primarily an active Red-tail nest at Bryan Park, and a very active osprey nest at Stony Point.

It’s been bleak and gray and drizzly most of this week. The plants love it, but it’s difficult (for me) to take good photographs. This isn’t a brilliant image, but I took it Monday afternoon at Bryan Park. I am uncertain if this is the male or the female, but it’s on the nest: 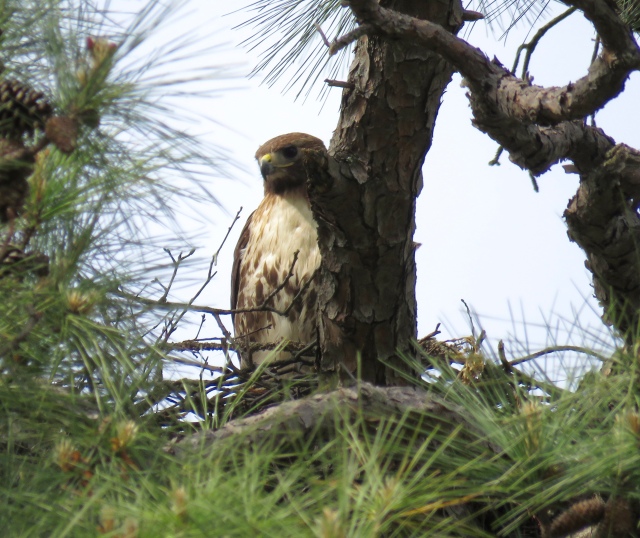 I appreciate reliability in a raptor:

I’ve determined (this week, to my satisfaction) that the osprey nest near Stony Point is going strong. One of the pair is always there, and both are often around. I can’t see inside the nest, but they act like there are eggs on it. I believe when the eggs hatch, I’ll be able to see or hear chicks. This is the male returning to the nest Tuesday. You can see the female below him:

I swam at the Tuckahoe YMCA on Wednesday, and as I left I looked in the cattails in the little pond in front. I keep expecting a Red-winged Blackbird to appear, and finally one did:

I was at the CSX tracks near Tredegar Iron Works a few hours later. More late arriving cliff swallows: 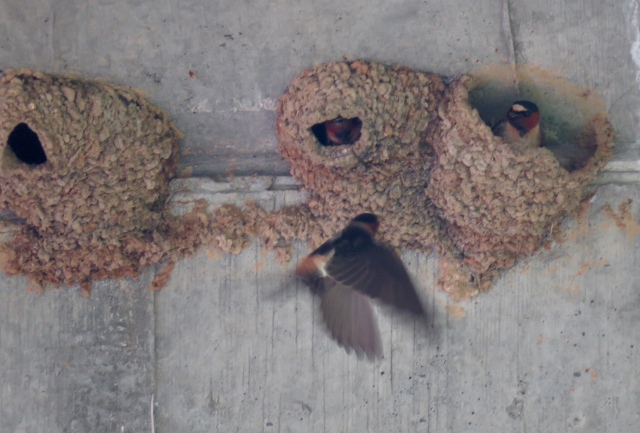 Cliff swallow flying to the nest on the same day as an osprey:

These flowers are directly under the cliff swallow nests. The sky may be monochrome, but these flowers make up for it: 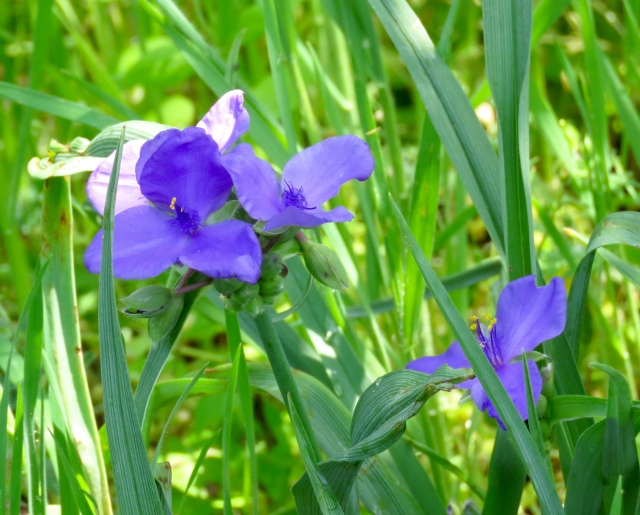 They’re so beautiful I can hardly look away.

See the caption on the last picture? Ditto for this one.

The following day I returned to Bryan Park. I got another picture of the redtail on the nest, but it’s no improvement over the one I took Monday. There’s a female mallard with a pair of babies on the pond. The light is miserable but the ducklings are cute:

There are no ugly ducklings in this photograph

I checked on the ospreys on my way home Friday. There was only one bird and the sky was the color of a really ancient sweatshirt. I took pictures, but it was a waste of time – they’re shapeless and monochromatic and hopelessly dull. And I was anxious because there was only one bird. It’s quite close to my house, so I went over there for a few minutes yesterday morning. The light was unimproved, but there were two birds on the nest.

Here’s a picture. The male (presumably) is sitting up on the edge of the nest. I’m guessing he’s snoozing. That’s called his “nictitating membrane” over his eyes. This is what it says on an osprey watching page I read: “In flight Ospreys close the nictitating membrane, a thin layer of clear tissue like an inner eyelid, over their eyes to keep the eye moist.  During a dive the membrane protects the eye when Ospreys hit the water.” To me it looks just like my grandfather used to look when he lay down on the couch and put his feet up on the edge and said “I’m resting my eyes.” And if you look just below him and to the right you can see the wide open and staring/glaring yellow eye of the female:

This is a miserable little movie, but it only lasts eight seconds. And you can clearly see her head turning:

Today (Sunday) is May 1, and a year ago today I took my first red-tail picture! But today it was raining and didn’t even go to the river!! Much to Mackey and Turner’s chagrin. I haven’t yet seen a “local” (Westbury Drive) Red-tail but I’ll continue watching. And watching the nesting pair at Bryan Park, and the Stony Point ospreys.

A quick look at the final two weeks of my enormous 1991 vacation. See you next week!

Home is where you don’t need a  passport

According to the journal I kept on my trip, I flew out of Melbourne, Australia a little after noon on Wednesday, March 13, 1991. I traveled for roughly thirty hours – and when we touched down in Los Angeles, it was around 9:00 AM – on the same day. Flew all day and landed on the same day, before I took off. I was twenty-nine years old then, and didn’t know what jet lag was. I caught on all of a sudden. Plus if you’ve never been in Los Angeles International Airport (I hadn’t) or even in Los Angeles (not there either) it is a profoundly disorienting experience. Fortunately some friends from the east coast named Virginia and Ralph had moved to LA and met me when I came off the plane. If they hadn’t met me, I’d probably still be there. They welcomed me into their home and I stayed for several days, sightseeing and recovering from my travels. After a few fun LA experiences:

Obligatory visit for LA tourists (for me, anyway) 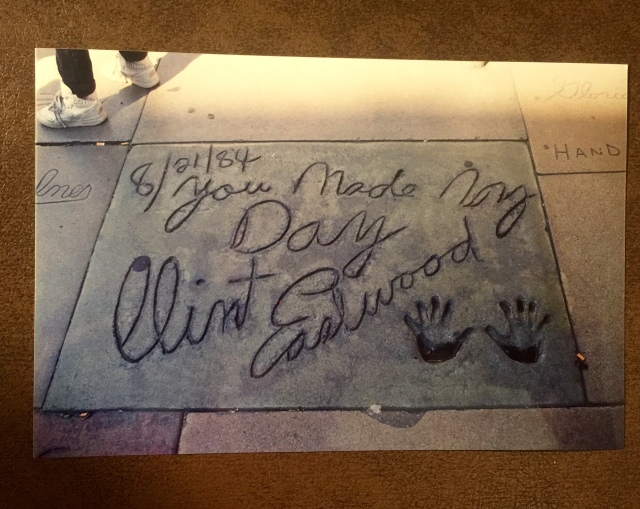 They took me to the Amtrak station and put me on Amtrak’s Coast Starlight train, bound for Seattle. I made stops on the way, including San Francisco plus a visit to my old buddy Don in Sacramento. I ended the trip at my friend MV’s house in Eugene, OR, where I stayed for a few days before heading back to Seattle then home to Dulles. There’s really too much in this section of the journal – it’s nearly overwhelming. I remember being on the train, and seeing a smokestack belching smoke, and hearing a very young boy say to his mother “Is that how they make clouds?” “Mm-mm.” “It looks like they’re making clouds.” It was a good observation; I had my camera out and took this picture: 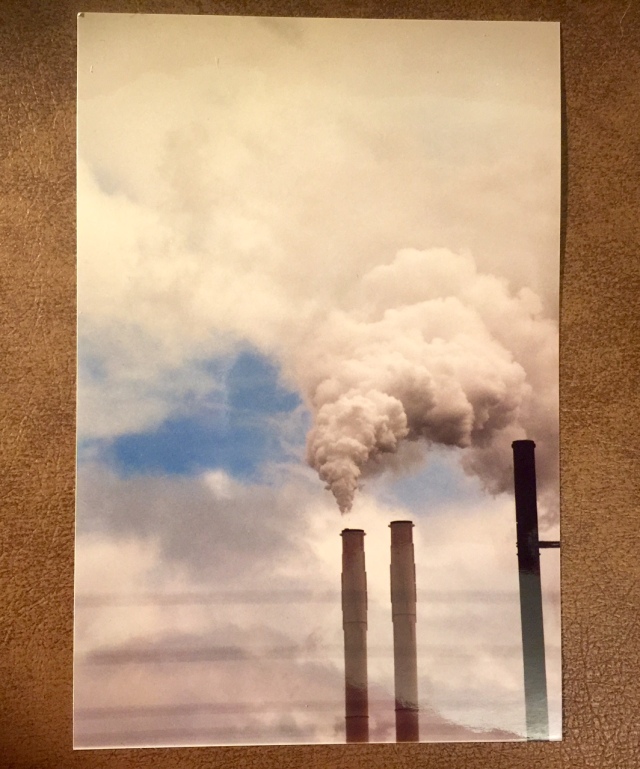 “Is that how they make clouds?”

I jotted this in my journal:

From the mouths of babes

I went on a Red and White Fleet cruise to Alcatraz while in San Francisco. This is a picture I took on a cell block:

Here’s the ticket stub from my trip; note it says “NO REFUND”:

When you went to Alcatraz there was NO REFUND

I visited another East Coast friend who had moved west, my old friend Don in Sacramento. We of course visited J Street: 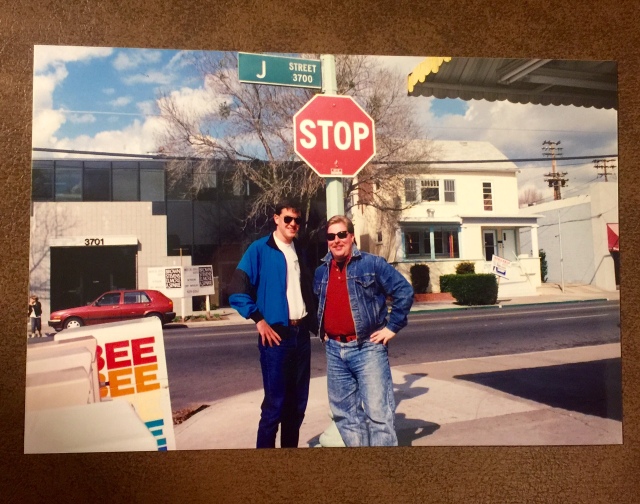 Always have to visit J Street:

From Sacramento I took the train to Eugene, OR and got to relax at my friend MV’s house – and go to the beach with her and her Greyhound!:

If you’ve never seen a greyhound run on a beach, make that happen. It’s a sight to behold.

On Wednesday, March 28, 1991 at 2:00 in the morning, there is a brief journal entry, concluding with these words: “That’s it. Good night. Finito. Vacation over. Real life to start in A.M.”

And so it goes. Until next week!

I am a rehabilitation counselor. I have many friends with autism and traumatic brain injuries. They help me learn new things constantly. I hike with dogs at the James River in Richmond - a lot. I've completed an Iron distance triathlon a year for 11 years. My most recent was in Wilmington, NC in November, 2013. I currently compete in mid-distance triathlons. And work and hike and take pictures and write and eat.
View all posts by Jay McLaughlin →
This entry was posted in Birds, Bryan Park, Dogs, Flowers, international travel, ospreys, People, raptors, Red-tailed hawks, Rivers, Smiles (including "dog smiles"!), Trains and tagged bryan park, Cliff Swallows, clouds, Dogs, Flowers, Fun, james river, nature, Ospreys, outdoors, People, Pony Pasture, Red-tailed hawks, Rivers, smile, Smiles - human AND dog smiles!, transportation. Bookmark the permalink.