My mother and I both went swimming this morning. Unfortunately, she was swimming at a pool near her home in the Shenandoah Valley and I was swimming in Lake Anna in Spotsylvania, VA. We were together in spirit! My lifelong enjoyment of swimming comes directly from my mother.

I’m going to get back to the race, but first I’m putting in my favorite picture from this week. I photographed a Red-tailed hawk for the first time in my life on May 1, 2015, at the end of my street, just over a year ago. This year I’ve been watching an active Red-tail nest at Bryan Park and yesterday morning, one year and six days after my first hawk photograph, I was rewarded with this picture of a baby red-tail. I have a hard time guessing ages, but this is a youngster. A couple of weeks maybe but I don’t know. More pictures from the nest later in this post:

First time I’ve ever even SEEN a baby red-tailed hawk – and was fortunate enough to get a photograph.

This morning I completed my first triathlon for 2016. I’m registered for five short triathlons  between now and October. This morning’s race was the High Cloud Peasantman Triathlon, a race I did for the first time last year. Last year’s event was superb in every way; this year was even better. The race is held annually at Lake Anna State Park. Here’s a picture of the beach, long after the race is over. If you look at the far right edge of the picture, you can see a red and white archway leading into the swim-to-bike transition area: 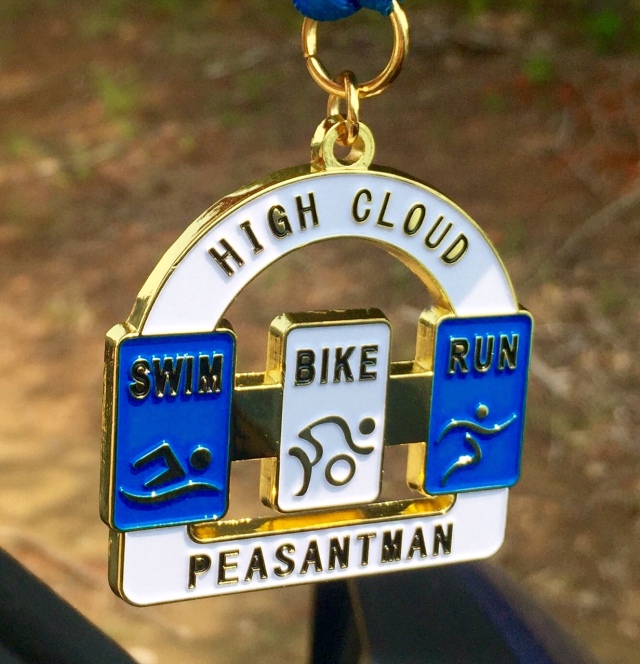 I’m not in it for the bling anymore. For me, it’s all about the cupcakes.

Here’s a picture of me after the race: 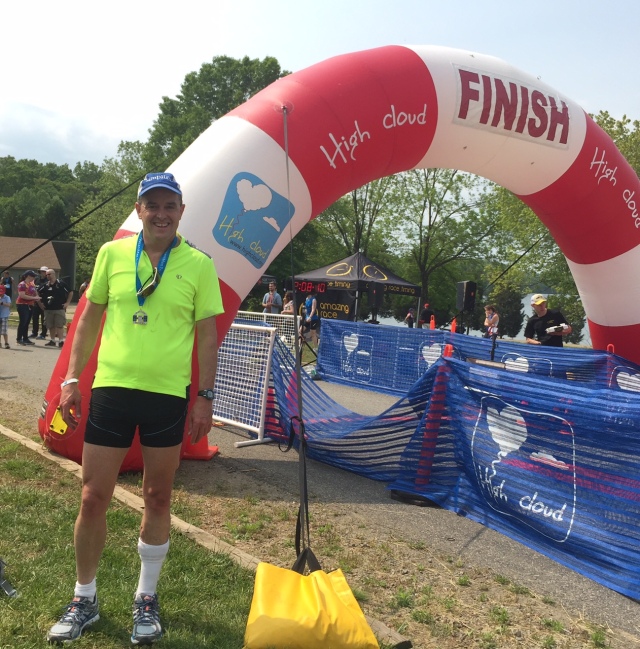 It’s the happiest thing – even if you don’t do this, you should come visit one. EVERYBODY is happy. It’ll rub off on you.

I’ve been doing triathlons thirty years; Peasantman is the first race I’ve ever been to that has cupcakes at the finish line. It makes it all worthwhile:

I was happy before I had cupcakes! There is no improving this experience.

Anyway, enough with the triathlons already. This is one of the adult red-tails – I’m not sure which – perched on a limb above the nest, looking straight down at the baby:

Adult on an overhead limb, baby in the nest.

A dead giveaway for the presence of red-tails is a band of irate bluejays. I wasn’t even sure the red-tails were in the tree, but the bluejays were causing such a commotion they had to be there. But it is so hard to see them! So anyway, I finally recognized a shape I knew was an adult red-tail, and I zoomed in. And I’m looking at the image on the back of my camera and I noticed another odd shape. There were two red-tails perched in the tree at once. They get harassed by the bluejays, but this is some serious protection for the baby. FYI, in most raptor pairs, the female is larger and the male is smaller. The female is above and in the back in this picture. The male is down lower. Male raptors are often referred to as “tercels.” They’re around a third smaller than females:

This is my first movie of a baby red-tail. It’s poor quality (if you’ve seen this blog before, you’re used to that) but this was the first baby red-tail I’d ever seen!

As you’re no doubt aware, movie making is not (yet) my strong suit. This is a slight improvement; it’s a little bit cool:

This is when Mackey and Turner and I were at the park yesterday morning. That’s my camera on the tripod. In the center of this image, toward the rear, you can see a tall loblolly pine. The red-tail nest is in the very top. Believe it or not, both adult red-tails are visible in this picture. They’re at the very, very top of the tree, almost precisely in the center. So the position they’re in in the picture above? Look for that precise silhouette, only tiny, at the top center of the picture. They’re looking down in the nest. Their camouflage is so perfect they’re nearly impossible to see. Speaking of camouflage, that’s my Dad’s old camouflaged tripod: 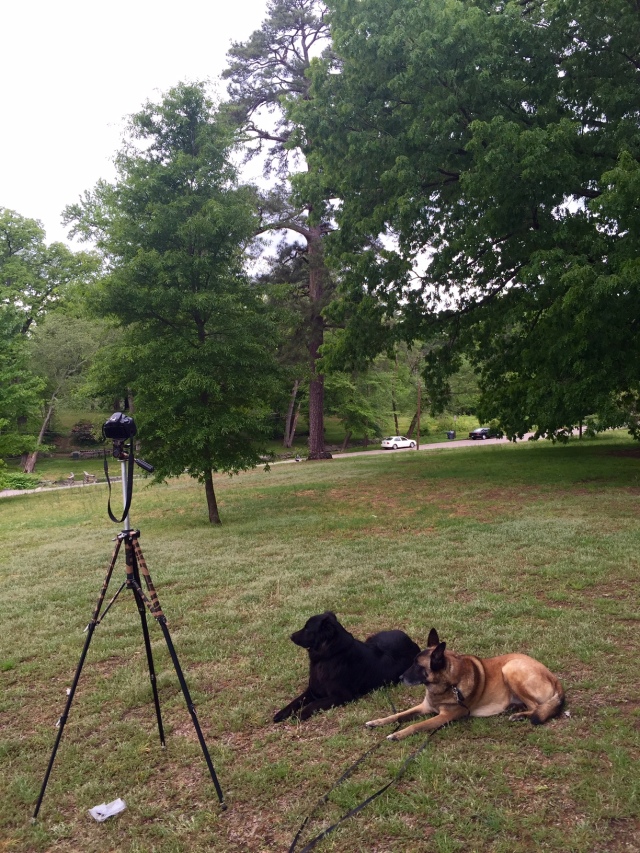 Red-tails are not impossible for bluejays to see. I took this picture earlier in the week. Look at the bluejay just above the red-tail’s head:

To go along with that picture – I just realized – I do have one more brief video, and it’s reasonable quality. About four seconds into it, you will actually see a bluejay fly up from behind the lower hawk and hit it in the shoulder. It’s not subtle – you can’t miss it. I’m astounded this even happens. It is a treat to be there. A treat for me, I mean – for the red-tail, not so much:

There are hawks all over the place this week. This one was perched on the cross at Discovery United Methodist Church near the intersection of Lauderdale Road and Gayton Road:

Red-tail getting a view from on high.

Mallards are not my favorite bird to photograph, but this pair standing on the spillway at Bryan Park was interesting: 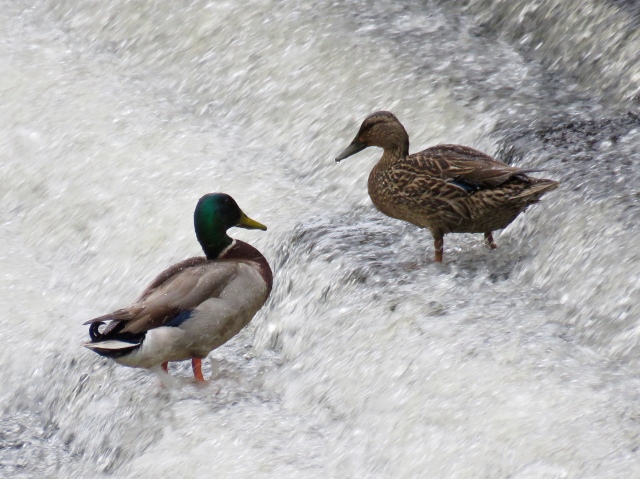 Waiting for whatever washes down.

We walked to the top of the spillway and looked down; this is another short movie:

I’ve been up since 5:00 this morning, driven to Lake Anna, completed a triathlon and driven back. And I get up at 5:00 again tomorrow morning! And I’m falling asleep on my keyboard! I’ll see you next week!

And to all mothers – Happy Mother’s Day! I hope it’s been a great one!

I am a rehabilitation counselor. I have many friends with autism and traumatic brain injuries. They help me learn new things constantly. I hike with dogs at the James River in Richmond - a lot. I've completed an Iron distance triathlon a year for 11 years. My most recent was in Wilmington, NC in November, 2013. I currently compete in mid-distance triathlons. And work and hike and take pictures and write and eat.
View all posts by Jay McLaughlin →
This entry was posted in Birds, Blue Jays, Bryan Park, Dogs, Endurance, raptors, Red-tailed hawks, Rivers, Smiles (including "dog smiles"!), triathlons and tagged baby red-tailed hawk, bluejay attacking hawk, bryan park, Dogs, Endurance, Flowers, Fun, high cloud triathlon, nature, peasantman, People, Red-tailed hawks, smile, Smiles - human AND dog smiles!, triathlon. Bookmark the permalink.