My brother Kevin and my niece Wren and I visited mom up in the mountains yesterday. In addition to seeing my mom I got a picture I enjoyed! First one of the week! Wren was on the back porch looking at the late-season remnants of mom’s yellow pear tomato plants and found this lovely animal climbing a stalk:

Same color as a bicycle shirt!

Mom also has the history of our family in photograph form adorning the walls of that house. Decades ago, Shane flew with Ivory (one of my excellent dogs of years gone by) from Hanover County (VA) Municipal Airport (KOFP) to Bridgewater (VA) Airpark Airport (KVBW). From Mom’s house you can see the runway lights at night. I don’t know what year this was but Ivory’s been gone since 2011 so many years ago: 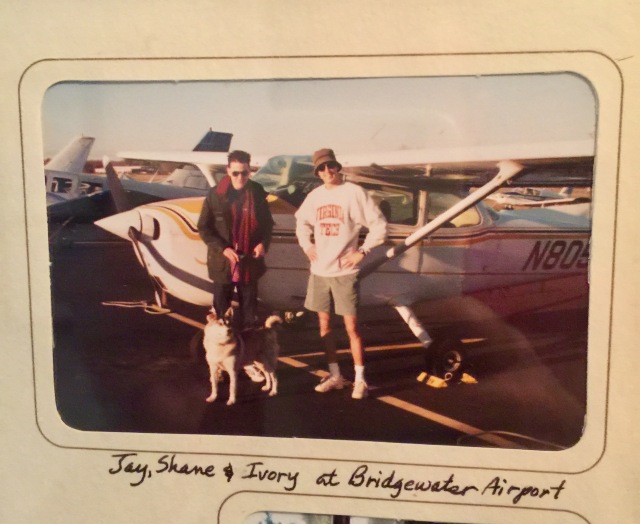 Here’s another picture from her wall. 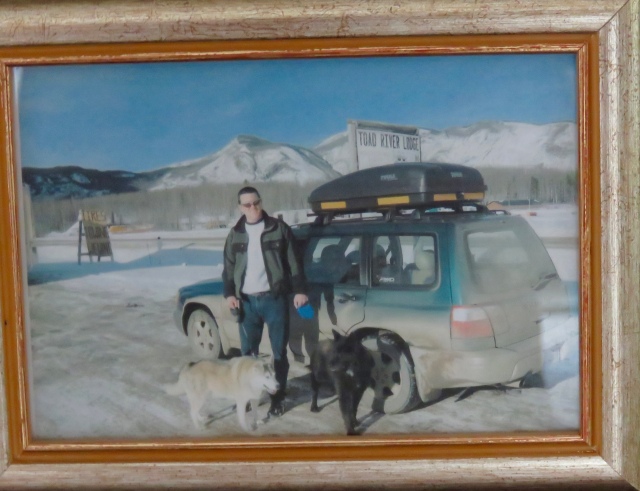 I’ve looked in my journal from that trip – it was 26 degrees below zero Fahrenheit that morning, but it was so dry and still up there, I was perfectly dressed. Hard to believe.   That was at the Toad River Lodge – you can read the sign in the background – it’s a real place. Click that link and take a look.

I am, yet again, running behind. Today was my friend Andrew’s birthday and we’re Redskins fans and they gave him a gift! They won! His brother Peter made this cake (it was delicious):

Andrew isn’t just a Redskins fan – he’s a Star Wars fan too. He wouldn’t let anyone else at his party wear one of these – he kept it to himself the whole time. But he was the birthday boy so you couldn’t really argue: 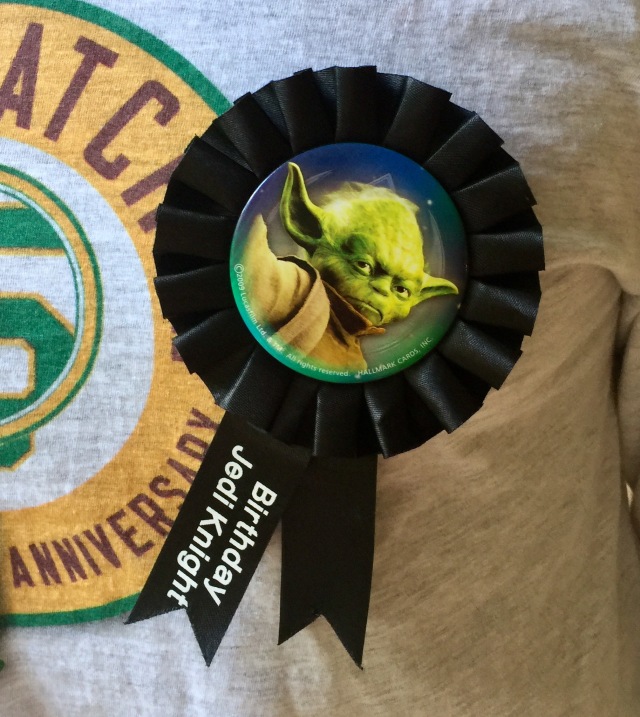 Lot, lot, lot going on this week. All of it fun but all of it time-consuming and keeping me away from the river! I’ll get out more this week. The rain didn’t help. See you next week!

Oops! It’s rained so much this week, I hardly had my camera out at all. But this morning there was a female red-tail on the tower across the street when I left for the river a bit after 9:00. I didn’t come home until noon and there was a male on the tower! The pictures aren’t spectacular but I love Red-tails so I’ll close with this image of the still-slightly-damp male:

I was in a used bookstore in Otavalo, Ecuador on a rainy August afternoon in 1995. I was browsing titles in a variety of languages (I only understood one of them) and breathing the scent of old limp paper and worn wooden floor in the soggy, humid air. I’m tall and the bookstore was small and cramped and I remember the windows were translucent with condensation. The proprietor was a thirty-something Canadian expatriate with blond dreadlocks to his waist. He poked his head around the end of an aisle and said “Eh, anybody here listen to the Dead?” There were half a dozen people in the shop; it was evident I was the only one who understood English. I said “Yeah, I’ve only been to one show, but I listen to some Dead.” He said “Jerry died, man!” Jerry Garcia, inarguably the heart and soul of the Grateful Dead. It was only a week after his 53rd birthday, two years younger than I am, so it was a shock. My knees didn’t buckle or anything like that – just another human being whose time on this planet had run out – but I knew before the Canadian even said “man!” that I’d never forget that moment.

I still don’t know why it was so unforgettable, but the setting was so unusual and it was such an unusual thing to hear, delivered by such an unexpected source, it was like a camera shutter clicked. Even as I type these words two decades later I remember everything. I was wearing this heavy scratchy wool sweater I’d just bought because I was freezing. I didn’t pack any warm clothes – I was going to the equator in August, how could it be cold? Otavalo is above 8,000 feet and it was cold. I could smell the lanolin in the sweater.

I’ll continue in this vein in a future post, possibly even the next week’s. Please come back! I’ll dig up a few pictures from Ecuador. Until next week!

I am a rehabilitation counselor. I have many friends with autism and traumatic brain injuries. They help me learn new things constantly. I hike with dogs at the James River in Richmond - a lot. I've completed an Iron distance triathlon a year for 11 years. My most recent was in Wilmington, NC in November, 2013. I currently compete in mid-distance triathlons. And work and hike and take pictures and write and eat.
View all posts by Jay McLaughlin →
This entry was posted in Birds, Fun, Insects, international travel, People, Pony Pasture, raptors, Red-tailed hawks, Rivers, Smiles (including "dog smiles"!) and tagged Dogs, Fun, nature, Red-tailed hawks, smile, Smiles - human AND dog smiles!. Bookmark the permalink.

2 Responses to Thank goodness I visited my mom yesterday!