The first Pony Pasture buffleheads (that I’ve seen) of this season:

Nothing marks the change of season more precisely than the appearance of Buffleheads (Bucephala albeola) on the falls of the James River. I think they wait in probably Fredericksburg or somewhere just north of here and watch TV and the first time they hear “frost warning” they fly to Richmond. It’s uncanny how precise their timing is. Today was the first time I saw them this season and tonight is the first frost warning of the season. They’ll stay in this area until the last frost in mid-April. Then I presume head for Canada and points north.

This blog post’s title comes from Pete Seeger’s 1962 song (made popular a few years later by The Byrds) Turn! Turn! Turn! (To Everything There Is a Season).

This was looking upriver at Pony Pasture earlier today when the dogs and I got out on the rocks. It is impossible to look at this and not feel calm. It doesn’t matter what else is happening anywhere – this is what the river does:

Best relaxation medicine ever made. Except it’s highly addictive.

It’s late in the season – the buffleheads are here – but so was this nasturtium in our front yard before we left for the river this morning: 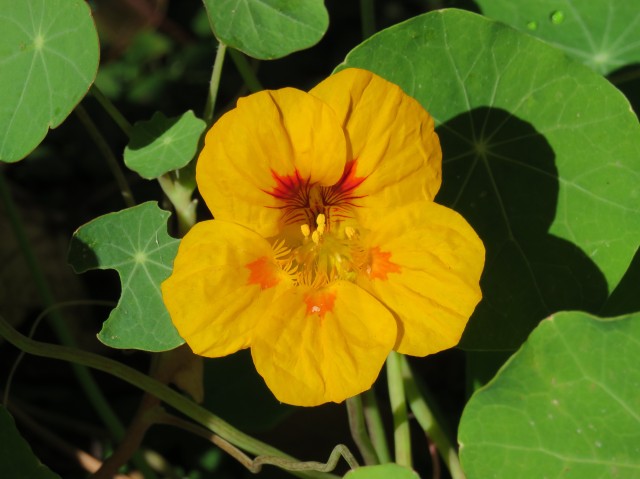 Picture taken on November 13 – a very hardy plant. Hearty too, in my opinion.

The dogs and I had some free time after I voted Tuesday and we got away from it all at Pony Pasture. Same place I saw those buffleheads this morning. Tuesday there was one Black Vulture (Coragyps atratus) standing in shallow water slowly dismantling what appeared to be a large dead catfish. Another one was standing on a rock watching. Then it jumped in the water to see if it could get a piece of the action – and of the fish. This is one image:

This was a peculiar closeup of the vulture lifting its head out of the water; it’s a neat image: 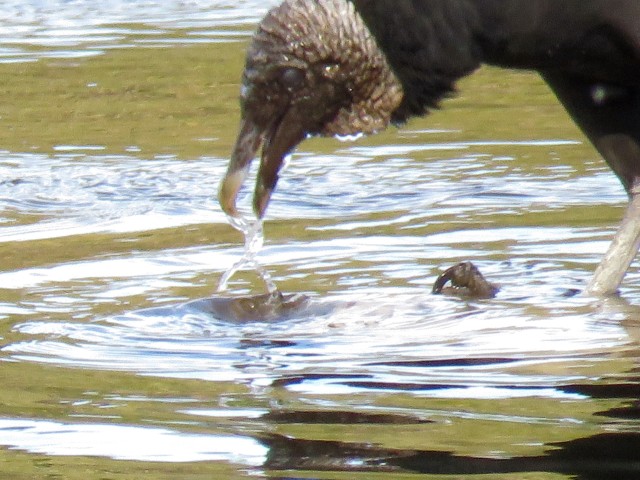 As we were leaving the riverbank that afternoon, I looked up and saw a stripe of red vine high on a sycamore trunk:

Red vine on the south side of a sycamore. Might be poison ivy, though it’s usually not that high up

It was later that afternoon when our local Red-tail (this is the male) showed up again for a brief appearance by the powerline near DS Freeman High School:

This guy is young (clean talons) and they just look inexperienced. After a season or two of successful kills, they look much more confident. Every time.

It is astounding how many goldfinches are still around. This isn’t a great picture, but my feeders are crawling with them: 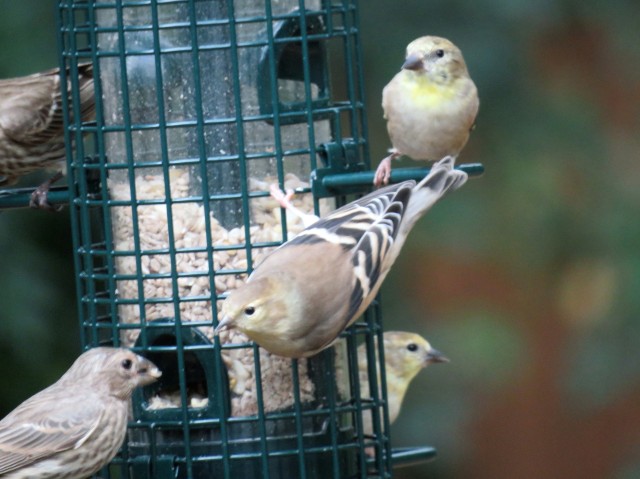 I had Mackey and Turner and Yuki with me – my main pack – at Pony Pasture this morning. I never took a picture of all three together. But we were up near Charlie’s Bridge when Yuki stopped to gaze off into the distance at something. This dog is the picture of confidence and serenity. Two qualities often found together:

That dog is not waiting to be told what to do. He’s thinking for himself.

Yesterday I “got” (I almost forgot) a marginal picture of a Brown-headed Nuthatch and a bluebird. The former is such a recent and delightful discovery, I’ll continue to include it when I get it. As long as it’s identifiable. This is adequate:

Brown-headed nuthatch. A treasure to discover:

The same day and I think on the same feeder I “got” (and also almost forgot) a somewhat less marginal (but still marginal) picture of a bluebird in the backyard. All birds remind me of my dad, but no bird reminds me more than a bluebird. I am so grateful they’ve appeared on these feeders:

They never make me feel blue.

See you next week! I hope! All best,

I am a rehabilitation counselor. I have many friends with autism and traumatic brain injuries. They help me learn new things constantly. I hike with dogs at the James River in Richmond - a lot. I've completed an Iron distance triathlon a year for 11 years. My most recent was in Wilmington, NC in November, 2013. I currently compete in mid-distance triathlons. And work and hike and take pictures and write and eat.
View all posts by Jay McLaughlin →
This entry was posted in Birds, buffleheads, Dogs, Fun, James River, Pony Pasture, raptors, Red-tailed hawks, Rivers, Smiles (including "dog smiles"!) and tagged bluebird, buffleheads, Dogs, Flowers, Fun, james river, nature, outdoors, People, Pony Pasture, Red-tailed hawks, Rivers, Smiles - human AND dog smiles!. Bookmark the permalink.