The hawk/starling picture comes a bit below. There’s no blood, but it’s an intense image. In my mind. I’ll open with a decidedly undisturbing image – our cat Dash, mesmerized: 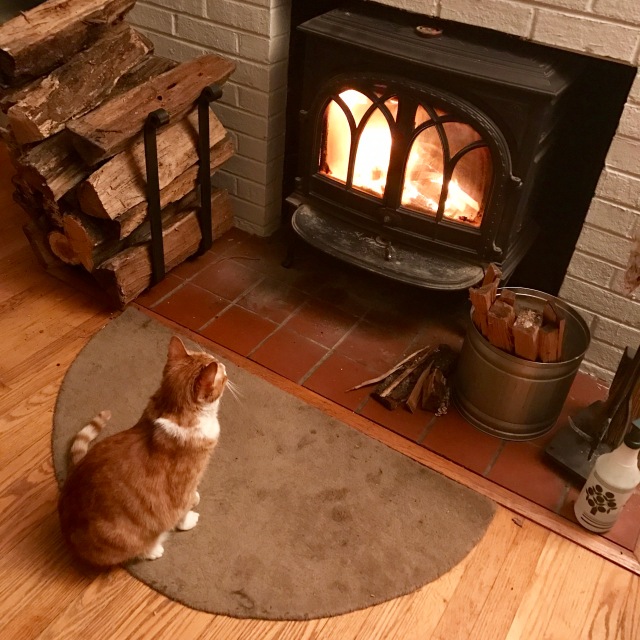 The disturbing picture – disturbing for some of us – comes a few pictures down. There is no blood. Just a Cooper’s hawk (Accipiter cooperii) hunched over the lifeless and staring body of a European Starling (Sturnus vulgaris) it had just killed. Don’t be thrown off by the word “European” before “Starling” – every starling you ever see, and you see a lot, is a European Starling. They are everywhere, all the time. One of the most common birds in Virginia. A couple of other pictures first. Also, there’s a picture of a snake at the bottom of this post, believe it or not.

I took a moderate quality picture of a Red-tailed hawk (Buteo jamaicensis) earlier this week. The hawk in this picture has a conspicuous bulge in its chest – that means it has a full “crop,” and had just eaten. Probably a mouse or a rat or a chipmunk. This was the parking lot next to The Westbury Apothecary and the Kroger on East Ridge Road: 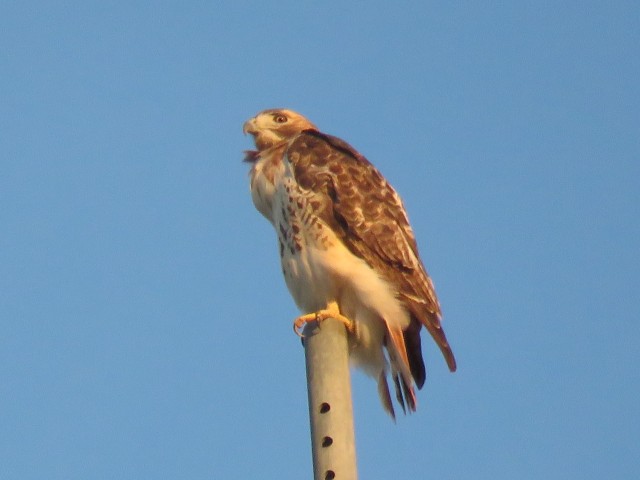 Also this week I photographed a slightly less common Red-shouldered hawk (Buteo lineatus). I was driving east on Patterson Avenue around 9:15 AM. I saw this bird in a tree and pulled into the parking lot of St. Bartholomew’s Episcopal Church,  10627 Patterson Avenue. I walked down the driveway and took this picture across Patterson Avenue: 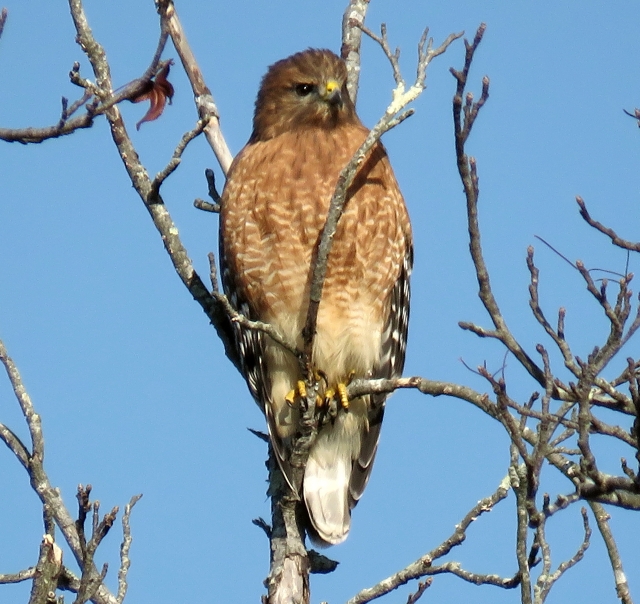 Notice the first word in their binomial or scientific or Latin name of both the Red-tailed and the Red-shouldered hawk is “Buteo.” Buteos are all big and stocky and have short tails. They are generally “sit and wait” hunters. Their main prey in central Virginia is small mammals, e.g. mice, rats, chipmunks, squirrels, rabbits, etc. The hawk that killed the starling this week was not a buteo but an accipiter – specifically, a Cooper’s hawk (Accipiter cooperii). Accipiters mostly hunt birds, and they have long tails for maneuvering through trees and underbrush. In this area, since I know where they all hunt, I could photograph a Red-tail 365 days a year. I have never photographed an accipiter – until Friday. I took this picture (it’s not disturbing) just as I arrived: 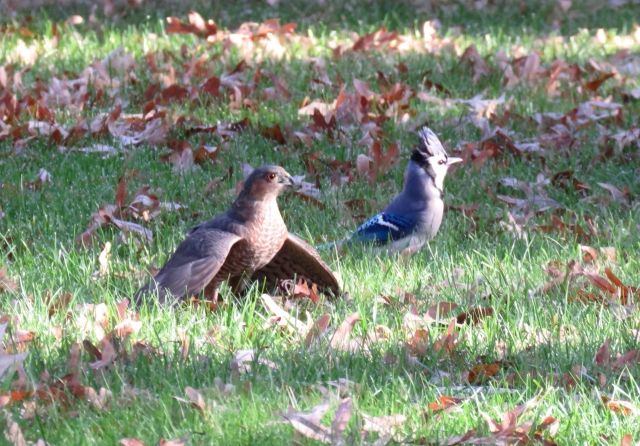 Cooper’s hawk “mantling” in foreground over a dead starling. Bluejay in the background.

The hawk had just killed the starling (when I took the picture I didn’t know that). The bluejay in the background (I also didn’t surmise until later) was waiting around for leftovers. The way the hawk is holding its wings is called “mantling,” and all hawks cover up their prey that way when they’ve made a kill in the open. It’s a signature hawk behavior; Red-tails do it too.

This next picture is the one I find a bit disturbing. That hawk’s open eye staring down at the open eye of that recently deceased starling, every time I look at that it startles me. Wild animals don’t often die in their sleep, and I’ve done a lot of hunting, but this still catches me off guard: 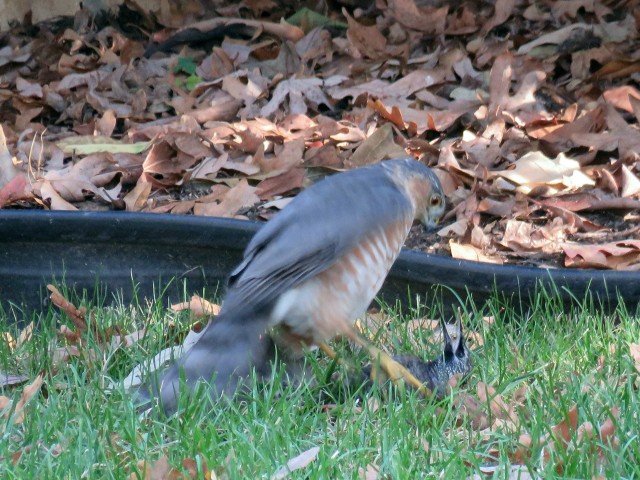 A link in the food chain right there. A very alive hawk and a very dead starling.

That was the first time in my life I’d ever seen a Cooper’s Hawk – remarkable. And that life and death scene occurred around 9:15 on a weekday morning about six houses away from a busy road, in a bustling neighborhood. That stuff goes on constantly – it’s hard to believe.

This Christmas Cactus is hard to believe too – and Ev has it blooming enthusiastically in our kitchen. This is just one of probably twenty blooms currently opened up: 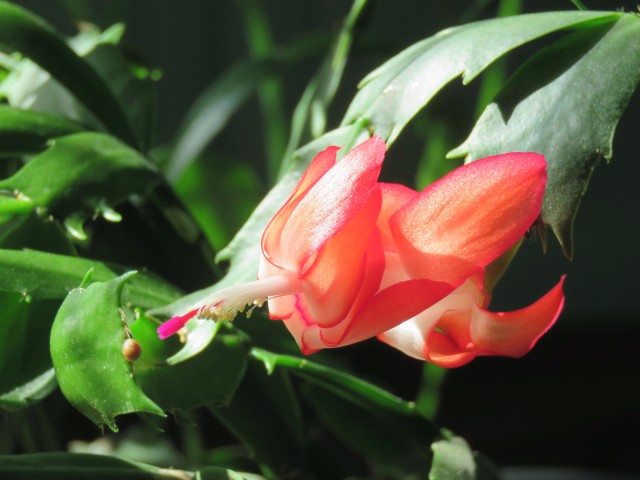 Christmas cactus blooming in our kitchen

Another thing that’s hard to believe even though I’ve seen it thousands of times is how beautiful our James River is – in downtown Richmond! If you’ve seen one picture of the James you’ve seen ‘em all, but there’s no such thing as a bad one: 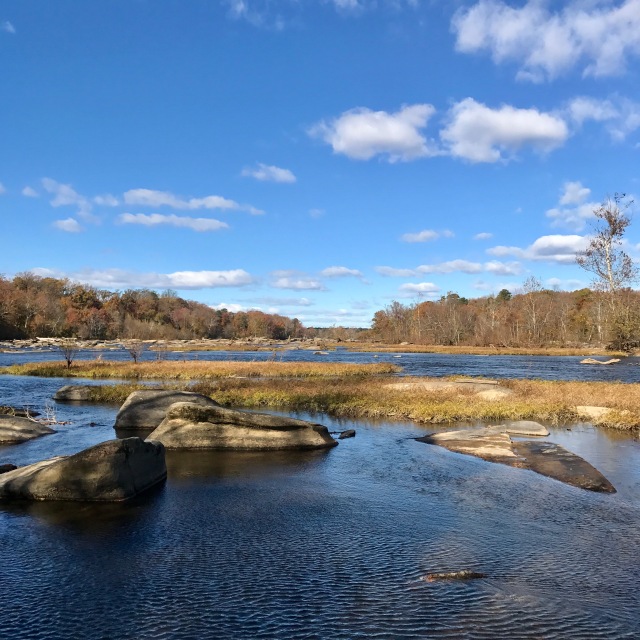 My vote for the most refreshing spot in Richmond. Or anywhere else.

Last week the first Buffleheads appeared at Pony Pasture – the most obvious sign of oncoming winter. Today I saw the first two seagulls of the season. In another month there will be dozens or scores. They come up here every winter. I’m not entirely certain why. Maybe because the river doesn’t freeze solid up here. These are Ring-billed gulls  (Larus delawarensis) though the quality of the picture is poor. Better pictures soon: 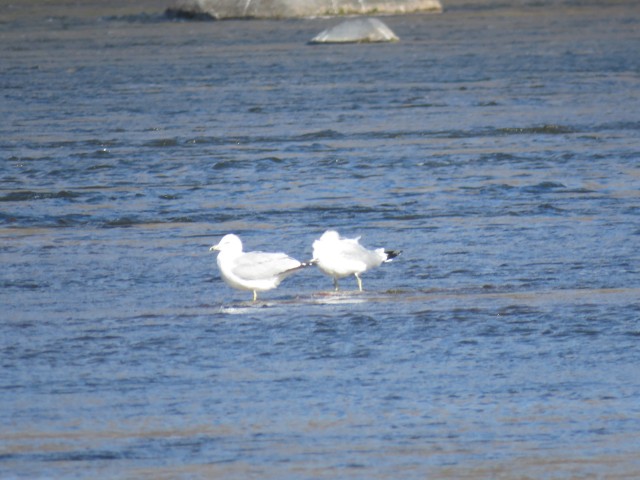 Pair of ring-billed gulls on the water in the wind

There were more buffleheads this week than last – more will continue to appear over the coming weeks: 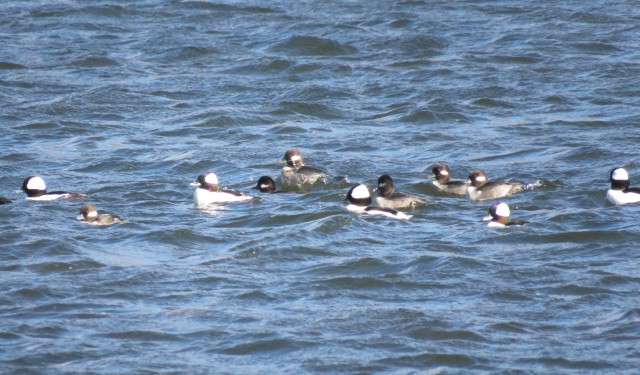 Mackey and Turner and Yuki and I got a surprise this frigid November morning – a snake was blocking our path! My friend Kim said yesterday (high temperature 73º) that probably seemed like a good idea to a snake. Today I don’t think the thermometer got out of the forties and the wind was wild. Not prime reptile weather: 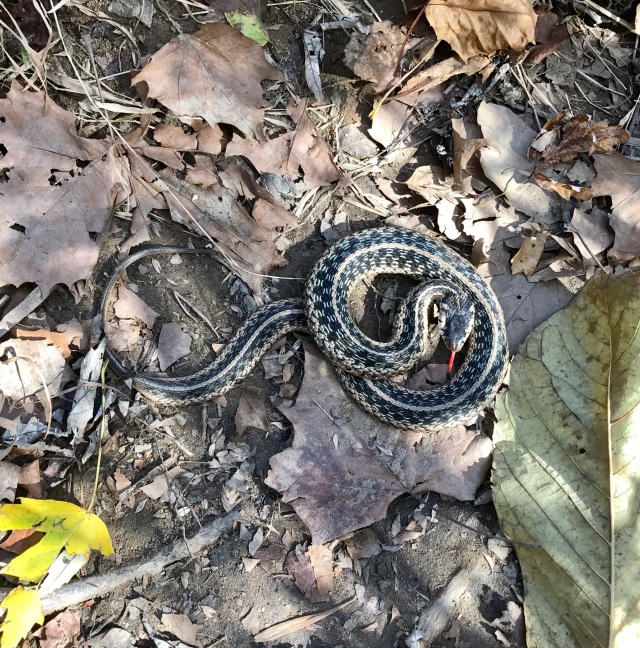 Garter snake sticking its tongue out, smelling the dogs