Posted on February 5, 2017 by Jay McLaughlin

Mackey and Turner and I were headed toward Pony Pasture on Tuesday (January 31) and were greeted by this sight: 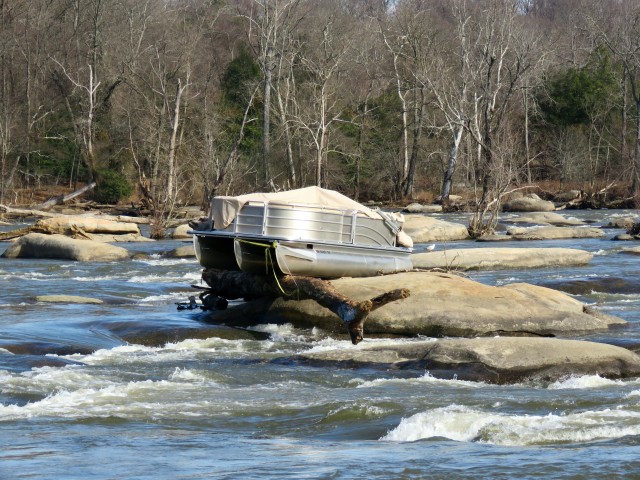 I sent a picture to my friend Pat; he responded with this article: Henrico fire crews investigating pontoon boat caught in James River

It was gone when we returned yesterday morning. As it turned out, that boat was one of the less interesting things we saw Tuesday. I hadn’t seen as many deer this winter as I’m used to.  A pair (at least; that’s all I saw) reappeared near Charlie’s Bridge Tuesday morning. I got this one first. It has an unusual looking face for a deer. Normally whitetail deer have slender, elongated snouts. The one on this deer is short, and so are its ears. It makes it look young (to me) but now I’m not as certain that’s the case: 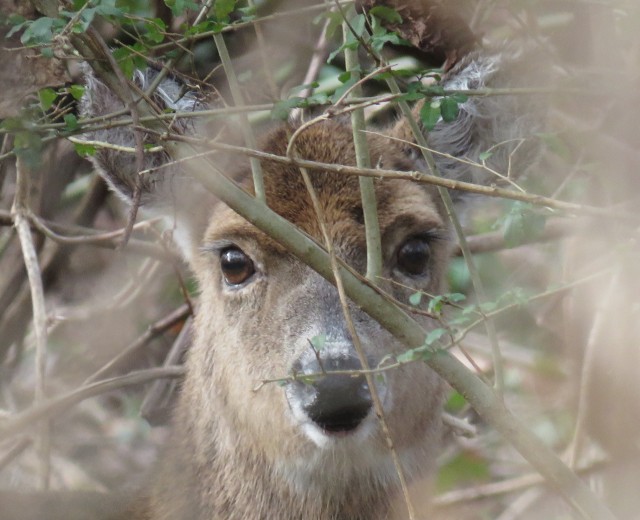 That pudgy face and big eyes look young. But I’m not certain that’s the case.

Take a look at that face, then at this one I took in almost precisely the same place in December of 2014 (bottom of the picture): 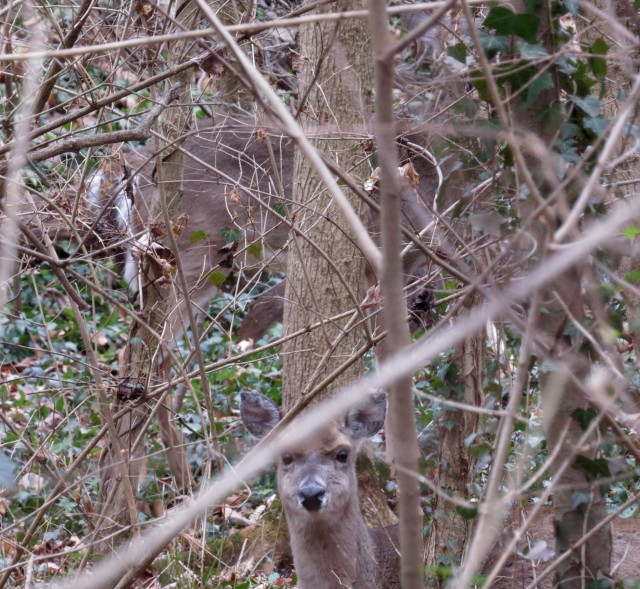 I believe the deer at the bottom of this picture (from December, 2014) is the same deer as the one above. And yes, there’s another deer behind it. They’re probably a pair.

I believe that is the same deer.

On Tuesday this deer was just a couple of feet away from the deer in the first picture. Just like the two deer in the second pictures. This is not a clear picture, but it’s easy to see her longer snout and longer ears. “Elegance” is an entirely human construct, but in my opinion she looks more elegant: 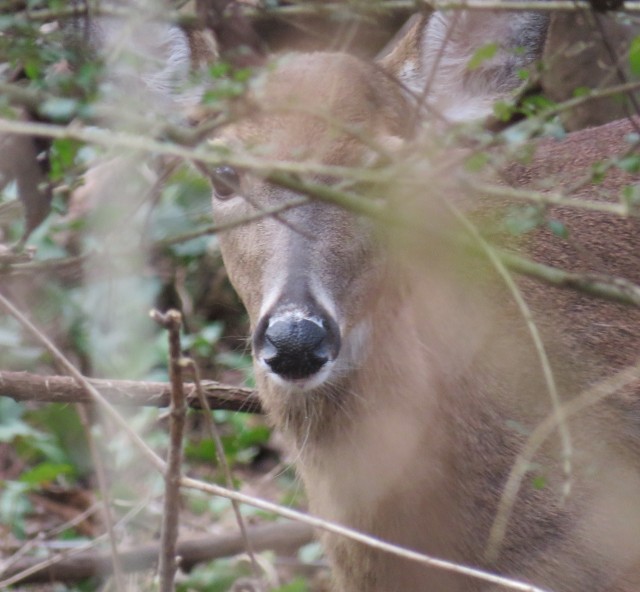 She has a very direct gaze. Extremely mature.

We’d barely gotten back across Charlie’s Bridge when I saw the shape of a hawk perched high in the winter-stripped branches of a creekside sycamore. It allowed us to come close, as Red-shouldered hawks often do, but this was the best picture I could get: 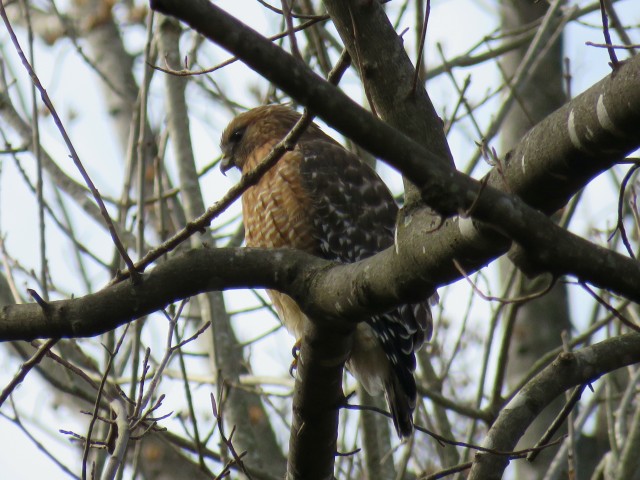 Red-shouldered hawk hunting over the creek at Pony Pasture.

Red-shouldered hawks must have been enjoying the weather Tuesday, because as soon as we pulled back into our driveway, one flew low across our front yard. It landed in a magnolia tree at our neighbor’s house two doors down. I drove down and pulled up under the magnolia to take a picture through my open passenger side window. Cars make a perfect “blind” for urban wildlife photography. Magnolias are evergreens; it’s unusual to take an outdoor photograph with this green “glow” in Virginia in January: 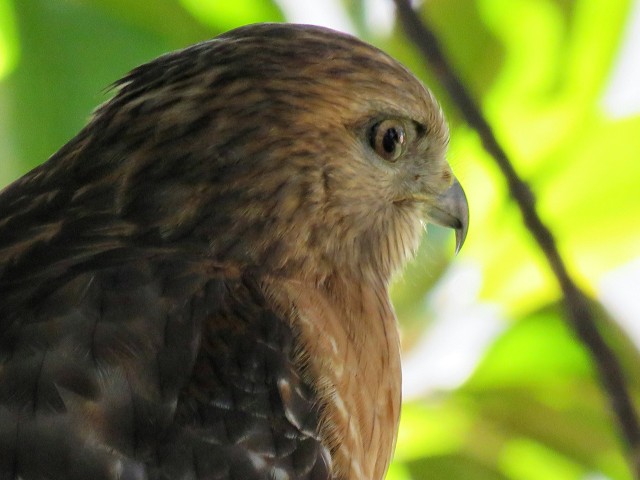 Hard to believe it’s Virginia in January; it looks like the tropics.

This isn’t my favorite squirrel picture ever but it’s a cute silhouette: 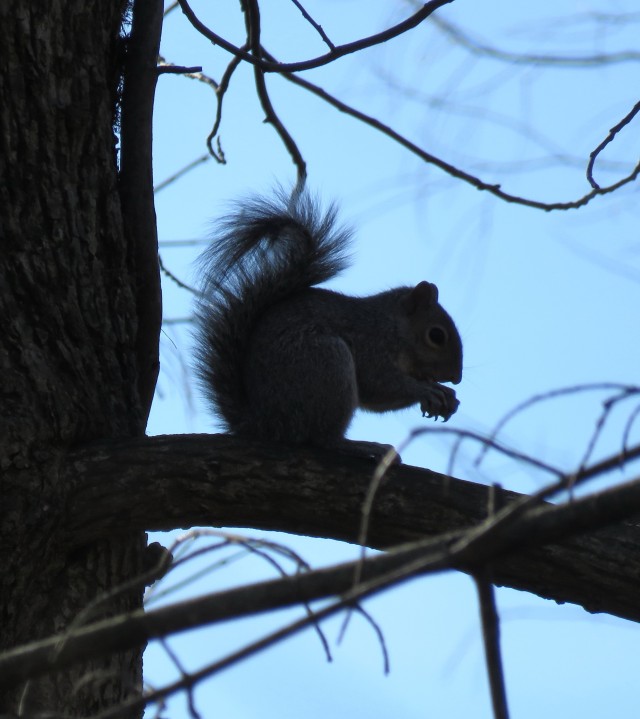 The mallards are pairing off and flocking up in a big way at Pony Pasture – they’re all over the park. I’m not sure how best to show the numbers; they were everywhere. I took similar pictures to this, only with ten or twelve ducks in them, in at least five different areas of the park Tuesday: 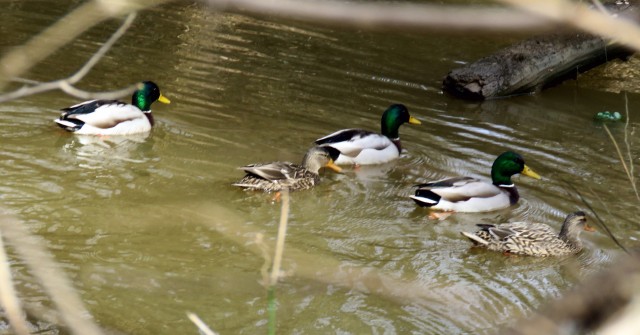 Just one of many mallard squadrons patrolling the park Tuesday.

I don’t normally make it to Pony Pasture on Saturdays but we had a relaxing hike  yesterday morning. This was another attractive pair: 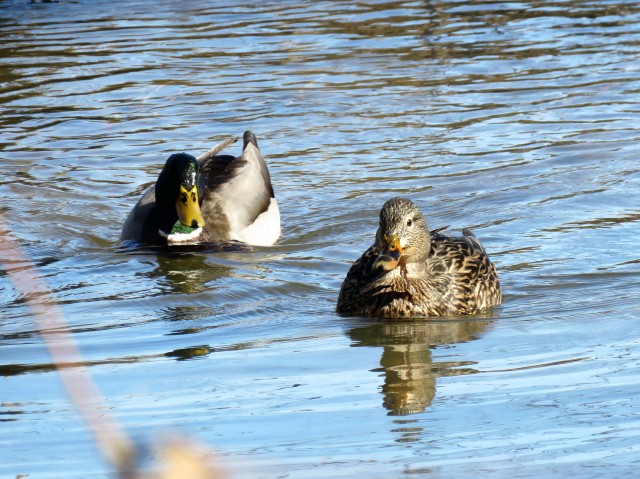 So beautiful in nice light

This morning I ran into some old friends and their dogs and the tone of the hike grew more social, which makes it hard for me to pay attention to the flora and fauna. But before we met, Mackey and Turner and I had a long encounter with an amiable and cooperative female Pileated Woodpecker. This is my favorite “still” shot of her; she’s so lovely: 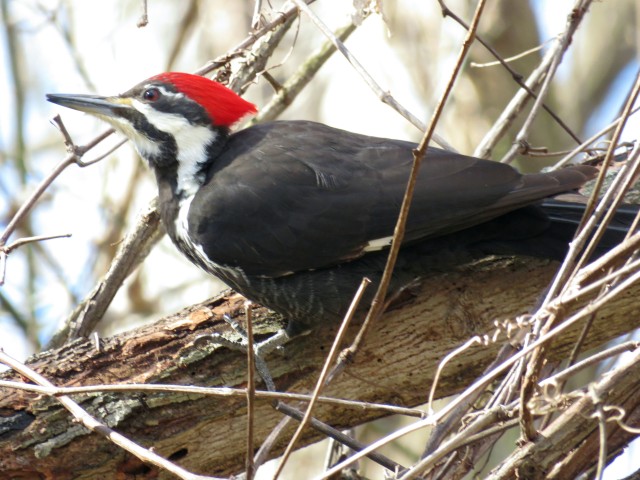 The best part was she tolerated us long enough that I could get this above average (for me) quality video. It’s about twelve seconds long and it’s worth watching:

Have an excellent week, all best,

I am a rehabilitation counselor. I have many friends with autism and traumatic brain injuries. They help me learn new things constantly. I hike with dogs at the James River in Richmond - a lot. I've completed an Iron distance triathlon a year for 11 years. My most recent was in Wilmington, NC in November, 2013. I currently compete in mid-distance triathlons. And work and hike and take pictures and write and eat.
View all posts by Jay McLaughlin →
This entry was posted in Birds, Fun, James River, Pileated Woodpecker, Pony Pasture, raptors, red-shouldered hawks, Rivers, squirrels, whitetail deer and tagged Fun, james river, nature, outdoors, Pileated Woodpecker, Pony Pasture, red-shouldered hawks, Rivers, Smiles - human AND dog smiles!, whitetail deer. Bookmark the permalink.

4 Responses to I’ll have mine on the rocks