Pat and I paddled up the river this afternoon and we almost got sunburned it was so bright. At my house near Parham and Three Chopt it went up to 78º; I’m not sure what it was on the river. I took this picture just as we got out of the canoe near Bosher’s Dam:

The wind was in our faces (a lot) when we started out, and it took us 60 minutes to paddle from Huguenot Flatwater to the dam. The return trip took 25 minutes. It was nice to have the wind behind us. Mackey and Turner and Yuki and I hiked at Pony Pasture (of course) earlier today. I asked them to sit politely for a moment on the walkway through the wetlands: 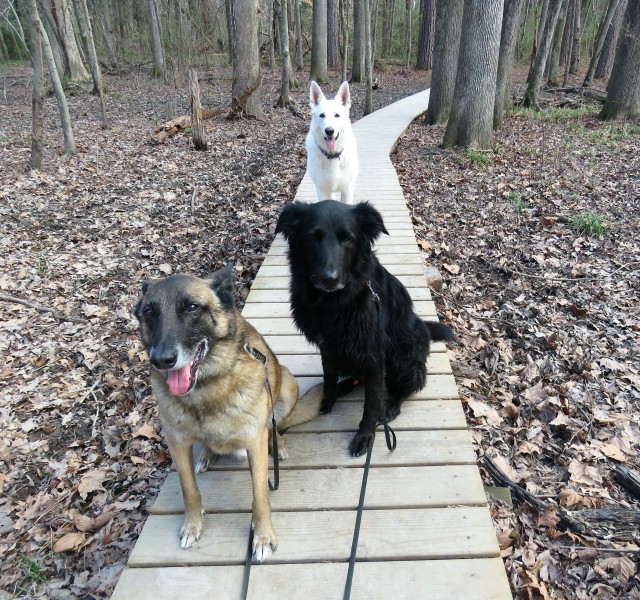 You cannot beat these three for hiking buddies.

When we were walking down the riverbank when we first arrived, the sun was coming up and shining through these fresh maple buds:

It didn’t feel a lot like the first half of February today. It’ll be cold again tomorrow. Just as we got on the river this morning we saw a dense flock of Buffleheads; they’re normally not crowded together like this:

They were staying in the same place (to the extent buffleheads ever do) so I thought I’d shoot a brief video. This is twelve seconds long and will give you a good idea of how difficult it is to get a decent picture of a lone bufflehead. They just sit there, then they disappear underwater, with zero warning – over and over and over again. Have a look:

Between the warm temperatures and the almost-sunburn and the fresh maple buds, it was easy to taste the approach of spring. Here’s another video from the back corner of Pony Pasture, near the Wetlands. Listen with the sound turned up:

I hadn’t realized – I’d never experienced – raptors as vocal as the ones I heard this week. Around our house on Tuesday, there were so many Red-shouldered hawks making so much noise in our neighborhood they practically sounded like a flock. I subscribe to an online birding guide called The Cornell Lab of Ornithology Birds of North America. It has encyclopedic accounts of every bird in North America. Under the “Red-shouldered hawk” entry, introduction, this is the first sentence of the fourth paragraph: “The Red-shouldered Hawk is a vocal bird early in the breeding season when courting and establishing its territory.” I wonder how many years I’ll have to do this stuff before I stop being amazed. All of the stuff that’s happening around me all the time, I’m oblivious. Then you read a paragraph here or a chapter there and some new piece of information suddenly makes sense. This is just one of the many Red-shoulders that were screaming around our house Wednesday morning:

Red-shouldered hawk in between squawks in my yard Wednesday

I was on my way home precisely nine minutes earlier (according to my camera) when I pulled into the parking lot of the West End Assembly of God, opened my sunroof and photographed this Red-tailed hawk perched on a cell phone tower: 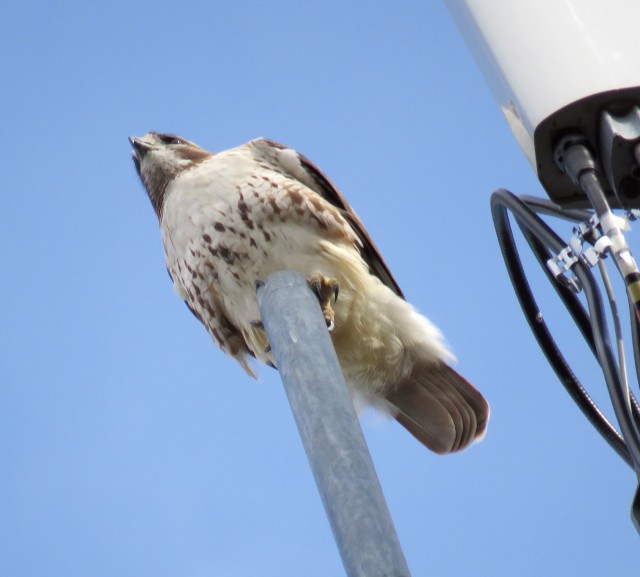 Tuesday we were headed to the river going east on River Road, down the hill headed toward Huguenot Road. I’d never seen a Red-tail there so when one swooped across the road and landed in a sycamore I pulled into the parking lot and got my camera out. Just across the street from there, Little Westham Creek flows out of the lake at University of Richmond and crosses under the road. I believe it’s actually between the University of Richmond and the Country Club of Virginia. I took this picture, and a moment later another Red-tail landed on the branch next to this one. I wasn’t quick enough to get both: 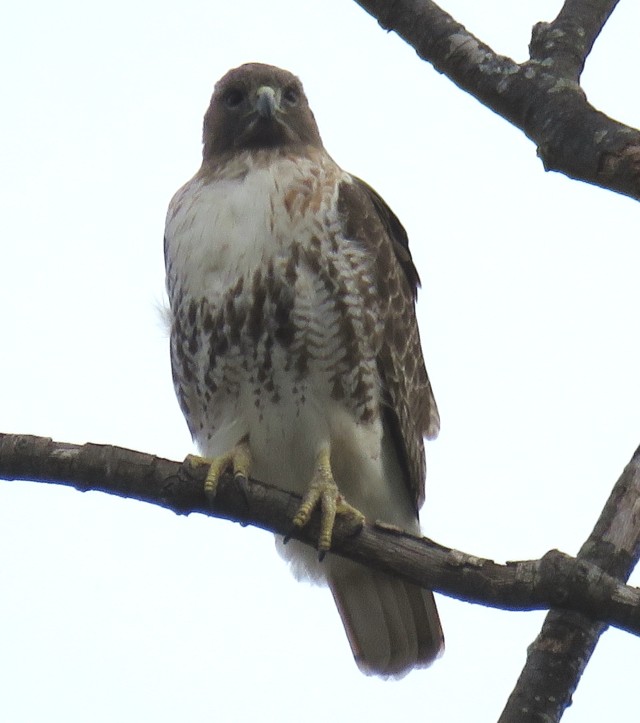 Later when we got to Pony Pasture there were two deer grooming each other in the woods near Charlie’s Bridge. I tried to get a video but the brush was too dense. Look closely – you can see the tongue of this deer in the lower left of the picture as it grooms the other deer. Just remarkable:

One whitetail deer grooming another at Pony Pasture on Tuesday

Between Pony Pasture this morning and paddling this afternoon, my day ran way too late. So I’ll close with a picture of one of the lovely pansies Evelyn’s kept blooming on our front stoop all winter:

PS Oops, found one more picture from this week that I enjoyed. When those two deer were grooming each other Tuesday at Pony Pasture, I got one clear shot through the brush. Look at this lovely animal:

I don’t know if that deer feels peaceful, but I certainly feel peaceful when I look at it

I am a rehabilitation counselor. I have many friends with autism and traumatic brain injuries. They help me learn new things constantly. I hike with dogs at the James River in Richmond - a lot. I've completed an Iron distance triathlon a year for 11 years. My most recent was in Wilmington, NC in November, 2013. I currently compete in mid-distance triathlons. And work and hike and take pictures and write and eat.
View all posts by Jay McLaughlin →
This entry was posted in Birds, buffleheads, Dogs, Flowers, Fun, James River, People, Pony Pasture, raptors, red-shouldered hawks, Red-tailed hawks, Rivers, Smiles (including "dog smiles"!), whitetail deer and tagged buffleheads, Dogs, Flowers, Fun, james river, nature, outdoors, People, Pony Pasture, Red-tailed hawks, Rivers, smile, Smiles - human AND dog smiles!, whitetail deer. Bookmark the permalink.