Turns out I was wrong

I was certain I’d seen the last Barred owl (Strix varia) of 2017. It’s mid-August and I thought I wouldn’t see them again until 2018. Mackey and Turner and I were hiking in Pony Pasture on Thursday (August 17). We had just crossed the bridge that goes toward the Wetlands and turned left (toward the river) and the creek was on our left. I noticed an unusual shape below us, and this young Barred owl was perched on a tree limb that had fallen across the creek:

A young Barred owl peers up from the creek bed Thursday morning:

I can’t say for certain but I suspect that was a young owl. I steer clear of attempts to interpret the facial expressions of non-human animals, but I thought I picked up on a bit of bewilderment here. I suspect owls (almost any raptors) are not used to looking up at people. But the tree that bird was perched on was at least three feet below the trail. I suspect that was a “youngster’s mistake” getting caught down low like that. But there may be other interpretations – I’m not an owl expert. It only took a moment for it to hop up into some low branches so it was looking down at us. The correct position for a raptor. Maybe that was my last Barred owl viewing for 2017. I’ll keep my eyes peeled. When it got up higher it was hidden by leaves and hard to photograph.

Cardinal flowers (see the last couple of weeks) are a harbinger of autumn in Pony Pasture. Another bright flower appears at the same time; I’m not sure what it is (identification is welcome and encouraged) but I always see this bright beauty in late August:

There are still so many colors in the park

There were plenty of Cardinal flowers Thursday too. They were still blooming all over the park this morning. And some bright yellow flowers. Lots of color still on the banks of the river. And there are pawpaws everywhere, and they’re really just starting to get going. I saw a Red-tail near home that day too – the raptors are beginning to show up everywhere. More than usual, believe it or not.

Anyway, what really prompted the title of this post was a sentence I typed on this blog exactly seven days ago. I put up a picture of a lovely gardenia blossom from our yard and wrote “I’m confident it will be our last gardenia blossom of 2017 but what a sendoff.” I should just stay out of the prediction-making business. I put up that blog post (A brand new treasure at Pony Pasture) around 8:00 PM last Sunday. The next morning – twelve hours later – I looked to the right of our front porch and saw (and smelled) this: 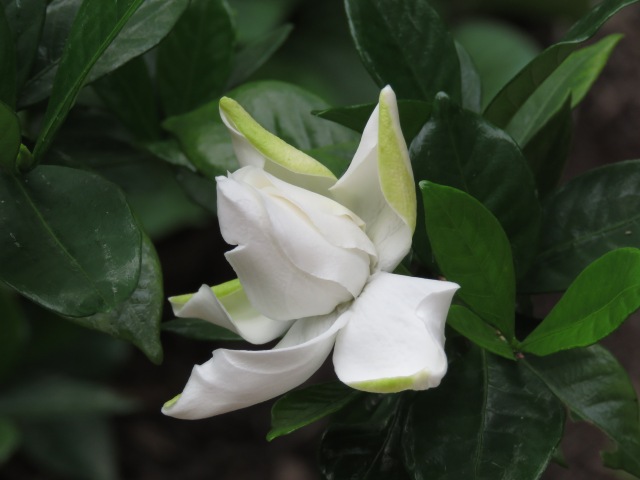 There are nasturtiums blooming with it, but I didn’t make any confident (and incorrect) predictions about the end of their growing season: 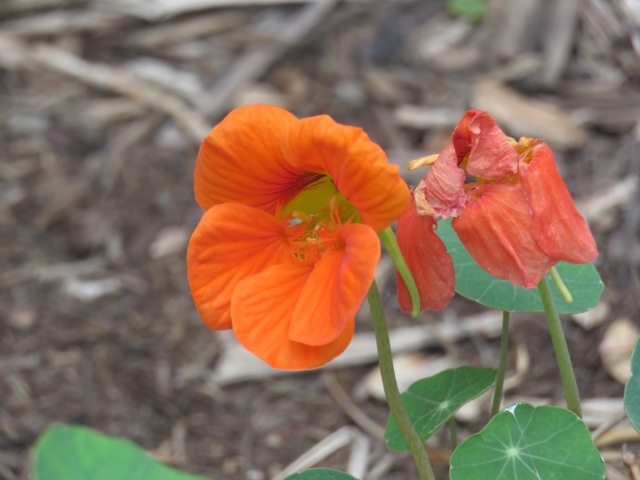 Brightest flower in the garden

I jumped the gun on several a number of predictions – I anticipate them too early in the Spring too – but many of these plants and animals will be assuming different forms or headed for a more favorable climate soon. But Wednesday there were still two (at least) ospreys on the nest near Fulton Bank. This was a very late arriving nest so I’m guessing they’ll be among the last to depart:

I think these birds will head south soon. But I have a poor track record when it comes to predictions.

Two hours earlier near Richmond Fire Station 25 (8800 Huguenot Road) I looked up and saw a Turkey vulture (Cathartes aura ) standing on a cell phone tower facing away from me with its wings outstretched. I’m not certain why the bird was doing this. It wasn’t drying out its wings; this was 12:00 in the afternoon on a dry, crisp day. And it didn’t fly either:

I can’t account for this behavior. But it sure looks neat.

I’m aware that I overdo it on Red-tail pictures in this blog but I saw – and photographed – Red-tails nearly every day this week. I get an odd feeling of comfort when I see them. I can’t quite put my finger on it. But it’s there. Here’s an “old standby” – a Red-tail in a predictable spot, on the cross at Discovery United Methodist Church (13000 Gayton Road). I haven’t seen this bird in some time and I was gratified to spot it looking down at my on Friday (8/18) morning:

There was another one the same day near the Westbury Pharmacy, and another in the same spot on the following day. That is a bird (Red tails in general, not that one in particular) that I never tire of seeing.

Besides our gardenias and nasturtiums (and Red maple and elderberries and figs and basil and tomatoes) Evelyn still has our roses blooming like there’s no tomorrow: 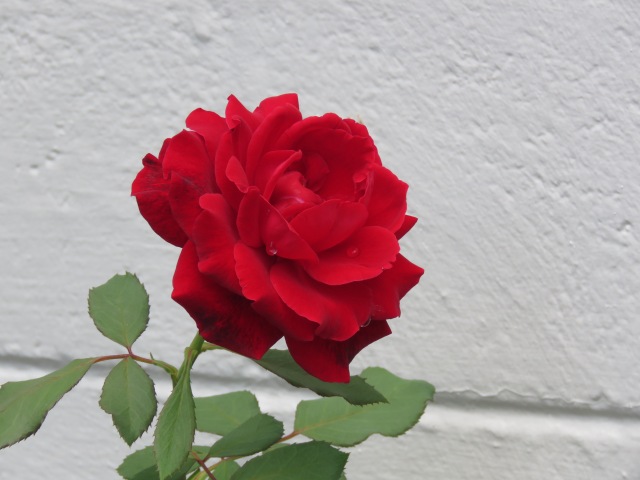 If you’d asked me to predict rose blooms, I’d have been wrong about that too. That is a spectacular flower.

I’m aware that luck is the main component when I get good photographs, and I wasn’t real lucky with this one. But I pointed my camera up and clicked this morning just as this osprey flew over while the dogs and I were at the edge of the river. I may get better at “aerial photography”:

That blue background forgives a lot of mistakes:

These flowers were on the riverbank this morning too – just at my feet as I photographed that osprey:

These river flowers come and go, like everything else. What a treat while they’re here!

I spend a lot of energy avoiding writing about politics, religion and advertising in this blog. I wrote a post in mid-2016 called NO POLITICS, NO ADVERTISING, NO RELIGION because I keep those subjects off this blog. The “mea culpa” part is, I don’t keep them off here out of any sense of duty or out of any nod to what I think is right or important or interesting or pleasing to an audience. I keep them off here because I am a naturally anxious person and I work hard to be calm and present. No matter what happens in the world – I mean, regardless of every single other thing – when I go to Pony Pasture, I know what I’m going to get. I know when I stand on the bank of that river and look across it, if I look to my left, the river is going to be flowing toward me. If I look to my right, it’s going to be flowing away from me. That’s the only way it’s every been, and that’s the only way it ever will be. I don’t watch television but I read the newspaper way too much, and it doesn’t take the edge off my anxiety. But the river always does. And so does seeing Red-tails on crosses. And watching flowers bloom and fade and leaves fall and come back again in the spring, and deer browsing in the woods. I may give the impression I just enjoy all that stuff, and I do. But the truth is – the mea culpa part is – it’s necessary for my peace of mind. I’m grateful every day. 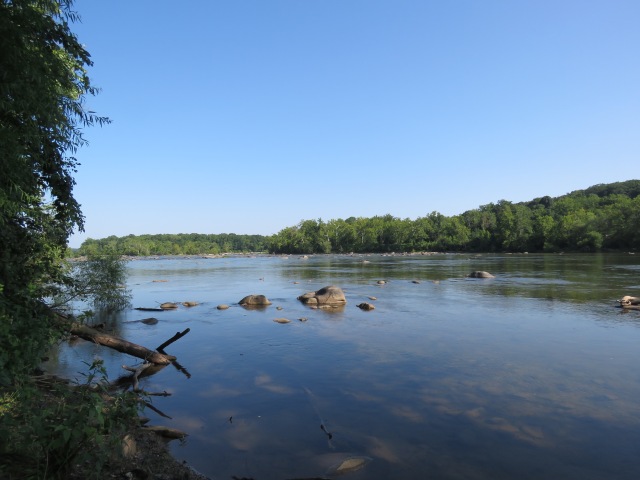 I am a rehabilitation counselor. I have many friends with autism and traumatic brain injuries. They help me learn new things constantly. I hike with dogs at the James River in Richmond - a lot. I've completed an Iron distance triathlon a year for 11 years. My most recent was in Wilmington, NC in November, 2013. I currently compete in mid-distance triathlons. And work and hike and take pictures and write and eat.
View all posts by Jay McLaughlin →
This entry was posted in Birds, Flowers, Fun, Gardenias, James River, ospreys, Pony Pasture, raptors, Red-tailed hawks, Rivers, roses, Smiles (including "dog smiles"!) and tagged Flowers, Fun, Gardenias, james river, nature, Ospreys, outdoors, Pony Pasture, Rivers, Roses, smile. Bookmark the permalink.

3 Responses to Turns out I was wrong