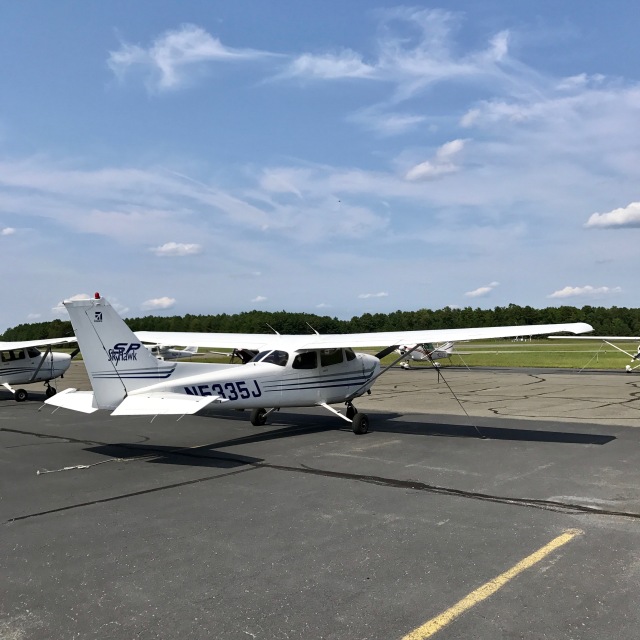 Cessna 172 – I flew in that today! Turning, banking, ascending, descending, it is beyond amazing. I can hardly wait to learn more.

Birthday dinner at l’opossum. That is flash glare or something on my lip – if it was food I would have eaten it.

Me on the left, Pat’s brother-in-law Tom next, then Pat, then Andrew, Quantico Triathlon 2017 – photo credit to Pat’s wife (Tom’s sister) Megan. Thanks Megan!

Whitetail buck on the side of Riverside Drive, August 24, 1:00 PM

This week, where do I begin? Evelyn and I celebrated my 56th birthday at L’opossum on Wednesday evening. My friend Andrew and my friend Pat and his brother-in-law Tom and I all completed the Quantico triathlon yesterday. This afternoon I took my first flying lesson at Heart of Virginia Aviation (HOVA) in Ashland, VA. Thursday after we hiked at the river, Mackey and Turner and I saw a whitetail buck in the woods alongside Riverside Drive, squiring around a herd of four or maybe six pretty little does and fawns.

This is my first birthday since Mom died. I hadn’t been thinking about her much recently but she came back into sharp focus on my birthday. When I was growing up, we didn’t have big birthday parties or get expensive presents or whatever. But just little things, like in the car you got to choose the radio station, you got your favorite food for dinner, that kind of thing. Just little stuff, but when you grow up in a family of seven, it’s really fun to be #1 for that day. And when we were adults, my Mom didn’t send real cool, clever, beautiful cards, but she always sent a birthday card – she never missed any birthday. Ever. And you better believe she’d call.

But speaking of cool birthday gifts. Even though my birthday was on a Wednesday, it was busy from start to finish. I was up at 5:00 and worked during the day plus took a long swim plus Evelyn worked plus we went out for dinner. But it doesn’t matter what you did during the day – the last thing before bed is take Mackey and Turner for a walk. So Evelyn and I  got home from our birthday dinner around 8:30 PM and the front garden beds were a little dry and had begun to get that late-summer dreariness. About an hour and a half later, Mackey and Turner and I walked out onto the front stoop and looked down and saw this final priceless birthday gift from Evelyn. Look at this beauty: 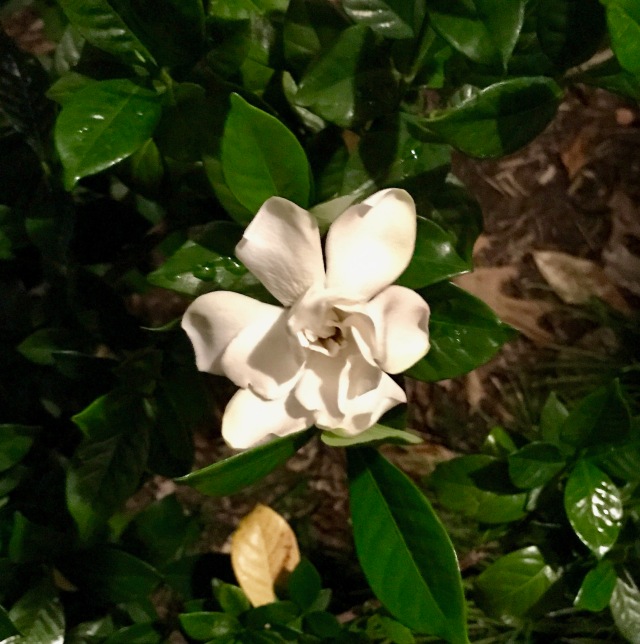 Last birthday present of the day, these gifts are beyond compare. Each one is priceless.

Here are some of the excellent cards I got from my outstanding family and fantastic friends. They’re all so thoughtful – I could not possibly be more grateful:

Birthday cards – everyone is so thoughtful. Especially Evelyn’s – on the left.

Here are a couple of pictures the ribbon from the triathlon we all did yesterday:

Front of the finisher’s ribbon

That triathlon ribbon is another bittersweet memento this birthday week, because nobody wanted to hear about triathlons in more detail than Mom. And this one, she would have just levitated. Because my Mom was the queen of networkers – she met people she knew everywhere. I went to high school in Washington, DC at a Jesuit high school called Gonzaga and our colors were purple and white. So when I saw a bunch of guys in purple and white at the triathlon, I went up and introduced myself. We had a great chat, then they introduced me to the base commander at Quantico, Col. Joseph M. Murray – Gonzaga class of 1985! Six years after I graduated! It was great fun talking with him. To give an idea of the esteem that Gonzaga alumni hold for their school, this is the first sentence of Col. Murray’s USMC biography: “Born in Washington, DC, Colonel Murray graduated from Gonzaga College High School and was commissioned a Second Lieutenant in the United States Marine Corps in 1990 after graduating from Ohio Wesleyan University.” My mom just couldn’t get enough of that kind of thing. Plus I guarantee – there’s a 100% chance – that she would have said “Oh, sure, Joe Murray, I was talking with his mother last week about…” Mom knew everybody, and knew something interesting about them. She was incapable of not carrying on a conversation. I don’t know how she did it.

My friend Andrew (on right w/glasses on head in picture at top) has been doing triathlons with me for decades. I remember going to his wedding, and now his oldest is a senior in high school! This year was my thirtieth anniversary of competing in triathlons, and he did one with me at Lake Anna in May. His birthday gift to me was a book – an actual book – about that race. Here are a handful of my favorite images. If you see me out and about sometime and want to see it, just let me know – I’d love to show it to you. I’ll probably carry it around with me in my car this week. It’s the only one on this planet! Unless  Andrew made more of them… Here are a few of the pictures I especially enjoy: 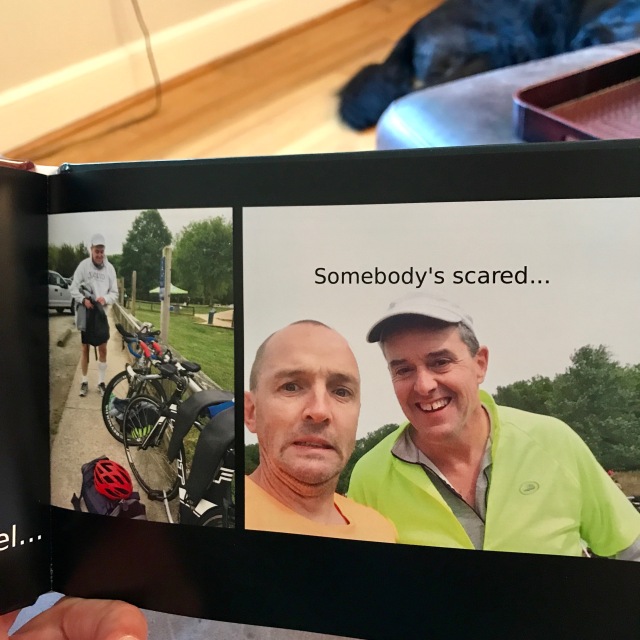 The author is wearing orange: 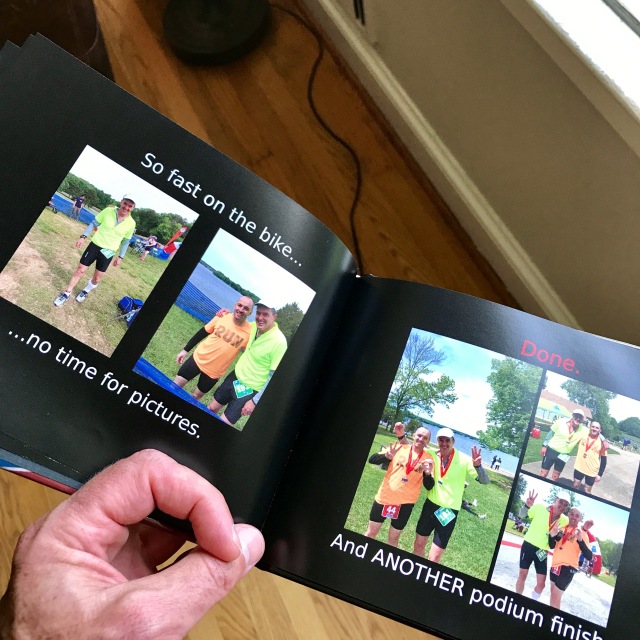 The book even has a picture of how I begin every race day (and every non-race day).

This is the place where I took the flying lessons:

I had my first flying lesson here today:

I had an excellent instructor named John Gillette. After some ground instruction we actually flew the plane for nearly an hour! 0.8 hours to be precise; that’s how many hours are in my logbook as I begin my journey toward earning a Private Pilot Certificate. My first flight was in equal parts invigorating and intimidating. John was calm and thorough and capable; he’s everything you’d want a flight instructor to be. I can hardly wait for my next lesson.

Of course Mackey and Turner and Yuki and I began our day at the river this morning. We started early so I could get out to Hanover for my flying lesson so we got to the river a bit early. Check these boys out at Pony Pasture this morning around 8:30: 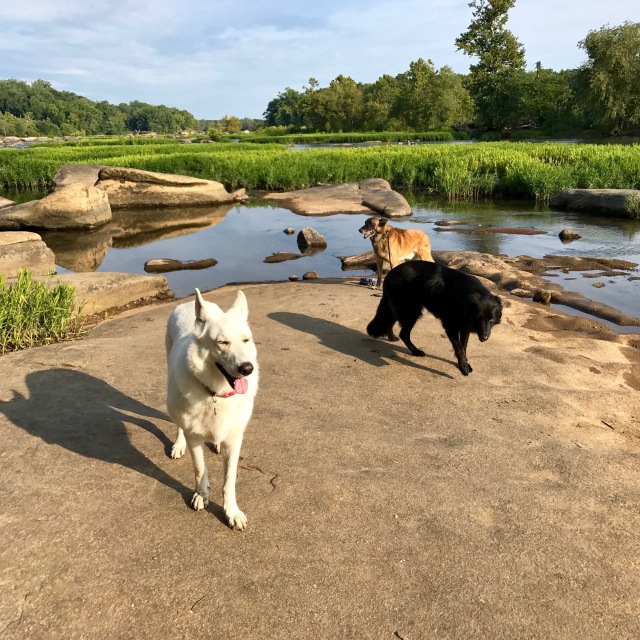 This is just a tiny bit of what you missed if you didn’t go to Pony Pasture this morning:

In our family – Mom would have loved this too – other people had exciting news this week. My brother Shane was appointed to a new federal advisory council on motorcycle safety. If you’d like to learn about the appointment (and see a recent picture of Shane), here is the article: Transportation researcher appointed to federal advisory council on motorcycle safety. If you look at the picture on that article, I’ll tell you something about it you might not otherwise know. You might see his big smile and say “oh, he’s so happy he got that great appointment.” Which of course he’s happy about that, but you’d be wrong. Shane’s life is studded with remarkable accomplishments. Just google him. But he never smiled like that before he and Kristin got married and had Wesson. He’s done great things for decades and never smiled anything remotely like that. You are totally seeing Kristin and Wesson in that smile.

About seeing that buck near the river – I was parked at the foot of this sign when I took that picture. Facing away from the river:

There is so, so, so much happening at Pony Pasture right now – you owe it to yourself to visit. There are so many pawpaws on the ground in some spots you can hardly walk without stepping on them. They smell divine. This morning a guy was carrying his 2 y.o. (he told me) daughter on his shoulders. She was saying “Pick pawpaws! Pick pawpaws!” He said she didn’t know what it meant but she just liked saying it. It’s easy to tell why. I’ve been eating pawpaws on every hike. I described the flavor to a friend as “banana-peach-custard, only with a hint of vanilla.” Plus there’s something indefinable about the flavor of a pawpaw. Because the texture is part of the flavor. It is like no other fruit I’ve ever eaten. Plus whenever I eat them I’m standing on the edge of the river and there’s a breeze and there are river sounds and smells and usually a little dirt I didn’t brush all the way off – it is a treat for every sense.

I often say they’re perfectly ripe after they fall off the branch but before they hit the ground. The perfect flavor/consistency window is so narrow. But the flavor and the experience is transcendent. It is not to be missed. Or ever taken for granted. Here’s one that fell in a bed of wintercreeper. Wintercreeper is another nasty invasive species (just because it takes over) but it cushions the ground for pawpaws and keeps bruising to a minimum. Here’s a picture from this morning, after I gobbled a little bit for breakfast:

This week has almost been too full! But Thursday (8/24, the same day I photographed the buck), Mackey and Turner and I were hiking in The Wetlands at Pony Pasture and we saw a doe stomping around in the undergrowth. I didn’t look at this video until later; I wish I’d gone over to see what she was pawing at. Take a look at the video; it lasts 25 seconds. It is not flawless, but you may see some deer behavior you’ve never seen before:

Here’s a still picture I took of her at the same time. She’s in mid-chew, but her mouth is not open, so she still looks demure:

One of Pony Pasture’s healthy and well-fed whitetail herd

There is so, so, so much happening at the river now – and everywhere else. There are pawpaws and deer and cardinal flowers and – as my sister Katie told me (thanks Katie!) – “New York ironweed – I think the scientific name is Vernonia noveboracensis“. There are cardinals and ospreys and kingfishers and owls and paw prints in the mud and alligator gar lurking in the shallows, the first leaves are beginning to drop, the river flows and flows and flows, and it changes and changes and changes, and it’s always the same. It’s like the answer to a kids’ riddle: Q: “What changes all the time but stays the same all the time?” A: “A river!”

Have an outstanding week. All best,