All in a day’s hike 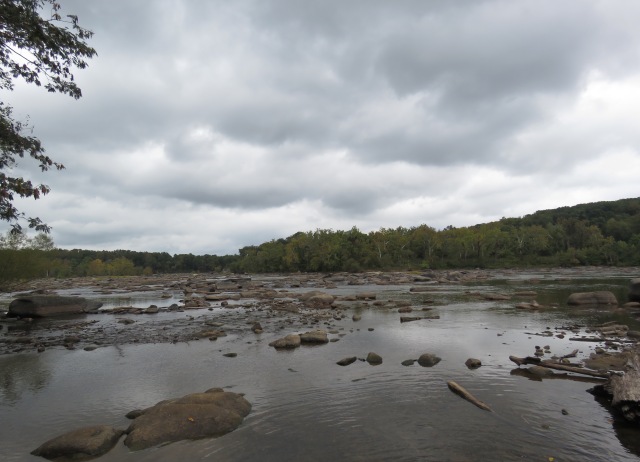 The river does not always have a cheerful countenance

I took that picture today at 12:30. It’s not even in black and white – that’s a color picture! The most notable thing about the weather at Pony Pasture today was the still air. The air was just stopped. You don’t notice the constant gentle breeze up the riverbank until it vanishes without a trace. Pony Pasture was like walking around in a big green closet. You could smell everything perfectly because the wind wasn’t blowing the smell away. You could smell the brown leaves and the green, the dirt, the water, the air, branches, sand, wood, there were pockets of smell everywhere we hiked. We saw zero deer. They may have seen us but we never saw them. I can’t imagine they like this weather – they learn a lot by smelling.

We had almost the opposite conditions Wednesday when Mackey and Turner and another buddy did the same hike. As I was coming down Riverside Drive, I saw a lone male Belted kingfisher (Megaceryle alcyon ) hunting from a low branch:

Male kingfisher on a fishing expedition

Notice the blue sky and green trees reflecting off the water? A few minutes later the dogs and I got to the river and met our buddy and started hiking. We heard a helicopter traveling west up the river and I clicked the shutter just as it was passing over our heads: 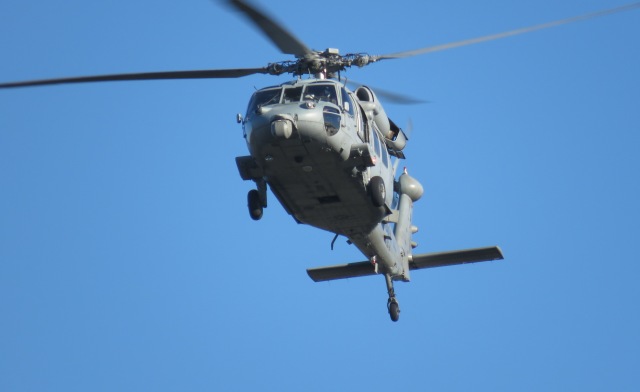 We hiked along down to the golf course; the water’s been low all week and there’s a sand spit reaching out into the river. We walked out on it and found this odd little frog looking for dampness. Please correct me if I’m wrong but I don’t think that green stripe is pigment – I think it’s algae. But I don’t know – it was small:

My guess that green color comes from algae. But correct me if I’m wrong.

We hiked up beside the golf course and came out into the field that’s the “Pasture” in Pony Pasture, and it appeared they’d just cut it that day. There was a tractor parked in the corner. On the far side of the field a large doe was sauntering along the edge. Fifty yards behind her, following at a leisurely pace, were three large youngsters. I don’t know if they were all hers but it’s not out of the question. They were dawdling along behind the adult, nibbling at the greenery that tractor had recently revealed. They were acting like we didn’t exist, even though Mackey and Turner were pulling on their leashes. Until my buddy stifled a sneeze and all three heads popped up like they were marionettes: 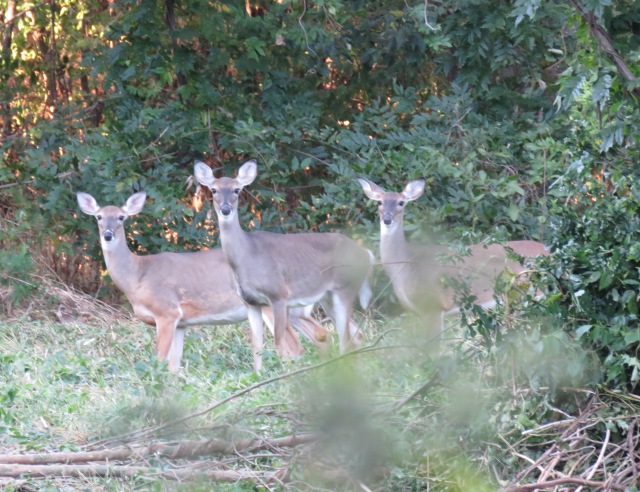 An instant before I took this picture, all three snouts were deep in the greenery

I am undeniably a person who sees more hawks than average. But Monday I believe I saw more hawks in one day than I’ve ever seen in my life. At my house, at my work, on the way to the Y, on the way home, commuting, it was non stop. I was taking pictures of one in my backyard when a second one flew three feet over my head. I was driving home from work in the morning when one crossed Patterson Avenue not six feet above the hood of my car.

Here are two pictures of the same Red-shouldered hawk, both taken in my backyard Monday, October 2. First it was perched in a tree watching me: 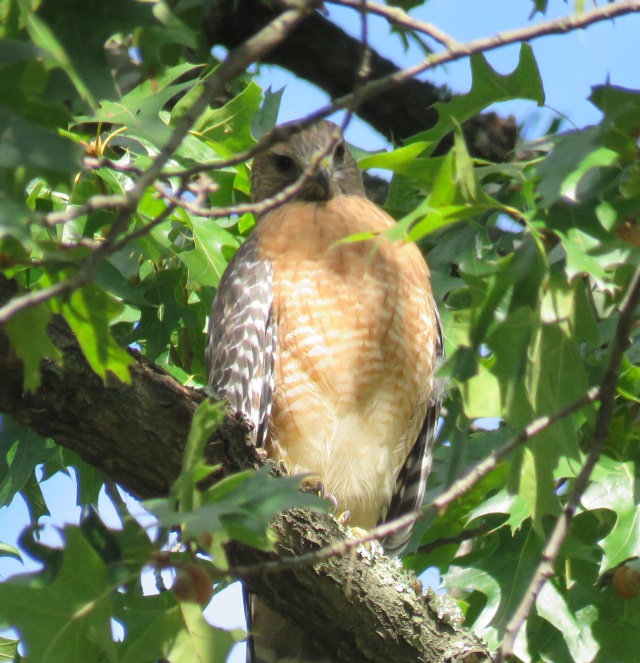 Male red-shouldered hawk gazing at me in our backyard

Then it hopped into a pine tree in our next-door-neighbor’s yard and faced away from me a moment. Just as I clicked it flew off: 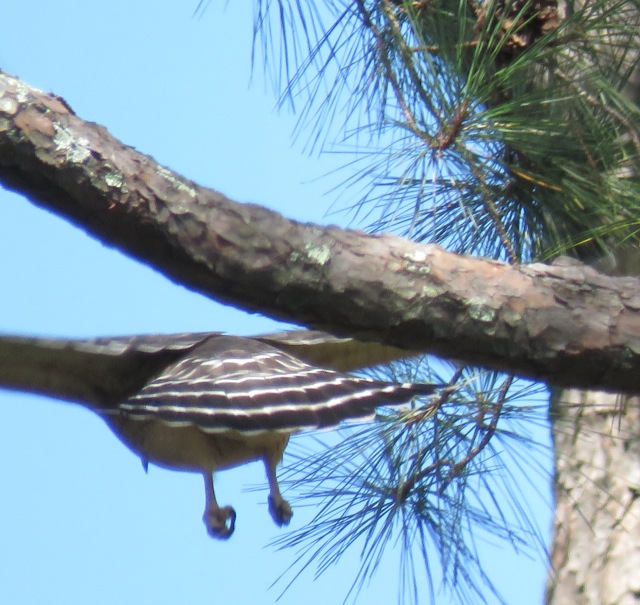 The hawk’s in the lower left, just dropped away from the branch and headed out

I got a shaky video of it while it was on the first tree. The video isn’t much to look at but it has a good solid Red-shouldered hawk call:

I glimpsed a shaded mockingbird on our bird bath yesterday: 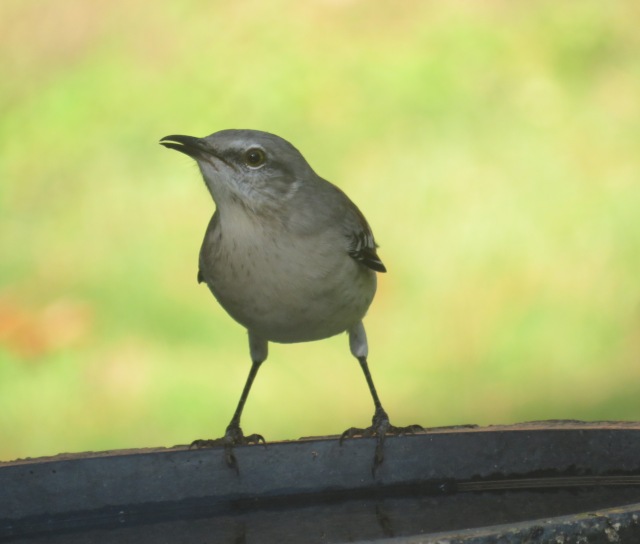 Mockingbird slakes its thirst in our backyard yesterday

Flying is progressing slowly – I’m grasping the basics. Soon I hope to take a picture from the air. But this is one of the Cessna 172’s I fly regularly; I took this picture late Tuesday morning just before my lesson began: 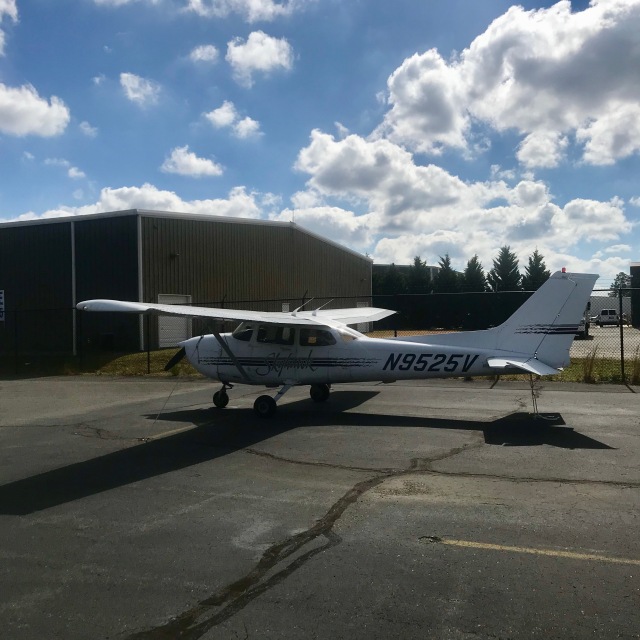 Enough for this week – I got off to a late start. Have an excellent week! All best,

I am a rehabilitation counselor. I have many friends with autism and traumatic brain injuries. They help me learn new things constantly. I hike with dogs at the James River in Richmond - a lot. I've completed an Iron distance triathlon a year for 11 years. My most recent was in Wilmington, NC in November, 2013. I currently compete in mid-distance triathlons. And work and hike and take pictures and write and eat.
View all posts by Jay McLaughlin →
This entry was posted in Birds, Cessna 172, Dogs, Fun, James River, mockingbirds, Pony Pasture, raptors, red-shouldered hawks, Red-tailed hawks, Rivers, Smiles (including "dog smiles"!), whitetail deer and tagged Dogs, Flowers, flying, Fun, james river, nature, Northern mockingbird, outdoors, Pony Pasture, red-shouldered hawks, Red-tailed hawks, Rivers, smile, Smiles - human AND dog smiles!, whitetail deer. Bookmark the permalink.

2 Responses to  All in a day’s hike