A story I never knew 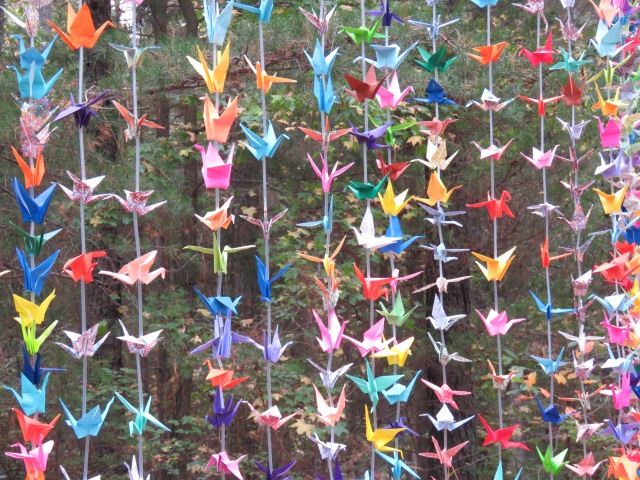 Sadako and the Thousand Paper Cranes

I was hiking in Deep Run Park Friday – the same place I’ve twice photographed copperhead snakes – when a more appealing sight caught my eye. It was 1,000 origami cranes. This is just a few of them – I didn’t know what I was seeing or I would have gotten a better image. I’ll finish this story at the bottom of this post.

I didn’t anticipate this happening, but this has been a taxing post to write. So I’m going to put in a few images from this week and take these no-good dogs for a walk then go to sleep. Here are a couple gardenias Evelyn cut from the backyard and put on our kitchen windowsill. The window was open and I got to smell these while I was doing dishes. Everybody should try it! 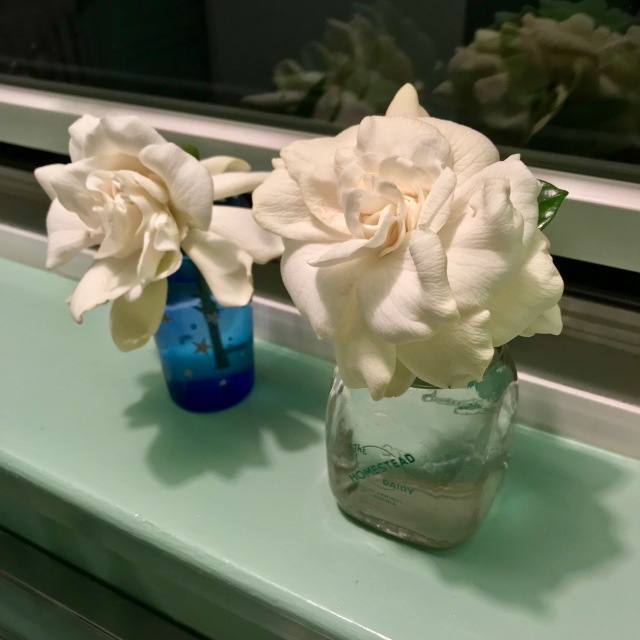 Gardenias in front of an open window – the perfect spot

Meanwhile, out in nature – although I took this picture on the side of the road in West Creek – this honeysuckle still smells divine – in mid-October:

I’m on the Shenandoah National Park (SNP) Facebook page and on October 13 they wrote an entry about Fall colors. Sassafras was a tree I learned about when I was young and I’ve always been fascinated with them. So my ears pricked up when I read this on the SNP Facebook page: “The scene-stealer this week, though, is sassafras. Sassafras trees, like sumacs, are the mood rings of the Appalachian woods. In the Park this week you can see the whole gamut of sassafras shades – single trees glittering jewel-tones of both crimson and green, startling as mangoes in every stage of ripeness, or dressing themselves in classic monotones like auburn, paprika, and Velveeta orange. A sassafras near Calf Mountain Overlook seven miles from Skyline Drive’s southern end glowed a luminous light red, like a glass of Pinot Noir on the Thanksgiving table.”

So when I was at Deep Run on Friday – both before and after I saw the origami cranes – I was photographing sassafras trees. I thought this one illustrated the SNP entry best. Two sassafras trees side by side, one still mostly green, the other, to borrow a phrase from the SNP’s description, ‘…a luminous light red, like a glass of Pinot Noir on the Thanksgiving table.” Have a look: 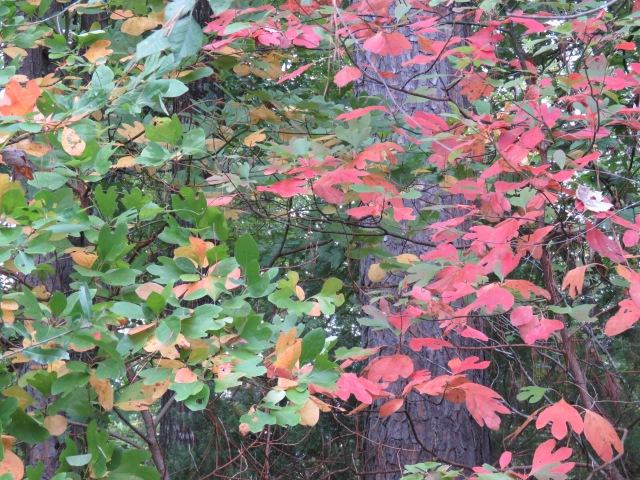 There are hawks still – although nothing brilliant. But I’m always grateful to get a “double” even when the quality is lacking. These two were on the tower near Freeman HS on Wednesday morning around 11:00: 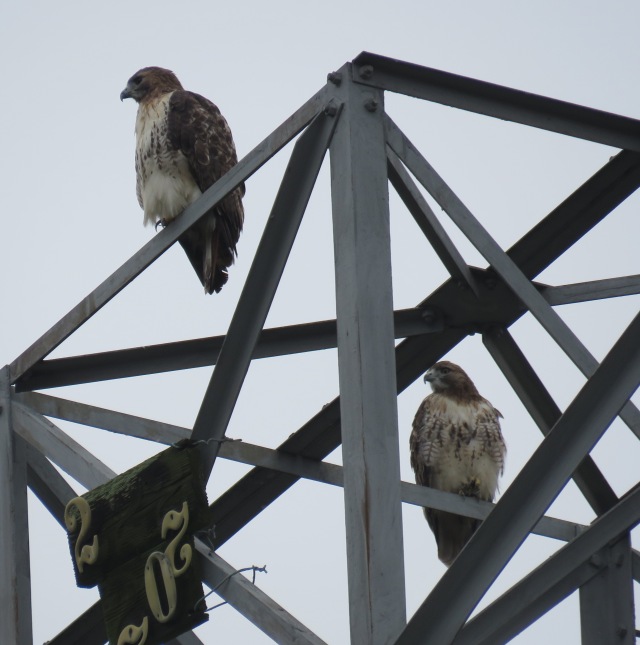 Gloomy sky but a great looking pair of Red-tails

I flew for nearly an hour on Tuesday, but my Thursday lesson and my lesson this morning were cancelled due to low cloud cover. This is the plane I flew Tuesday: 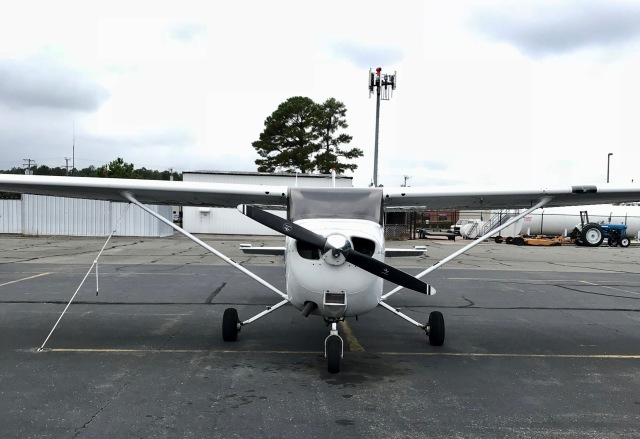 Sadako and the Thousand Paper Cranes

I saw those cranes and knew they meant something but didn’t know what. I googled “origami swans” and came to the story of Sadako and the Thousand Paper Cranes. I found it on Amazon and bought it (Kindle) and read it; it didn’t take an hour. This is the brief summary on goodreads: “Hiroshima-born Sadako is lively and athletic–the star of her school’s running team. And then the dizzy spells start. Soon gravely ill with leukemia, the “atom bomb disease,” Sadako faces her future with spirit and bravery. Recalling a Japanese legend, Sadako sets to work folding paper cranes. For the legend holds that if a sick person folds one thousand cranes, the gods will grant her wish and make her healthy again. Based on a true story, Sadako and the Thousand Paper Cranes celebrates the extraordinary courage that made one young woman a heroine in Japan.”

As some of you are aware, my dog Ivory and I did Animal Assisted Therapy in pediatrics at VCU-MCV for more than a decade. The first person we spent time with was named Whitney. We first met her in 2002. She had a tumor in her brain but fortunately for all of us it went into remission. She relapsed in 2007 and didn’t make it the second time. I remember a lot of people and a lot of events from my years working at MCV, but none stands out the way Whitney does. She was fifteen when she died in June of 2007.

I regret not writing more clearly about this post. I didn’t know the significance of the origami cranes until just before I began typing. So all the memories about Whitney didn’t come flooding back until just now. So I’m going to cut-and-paste a blurb I wrote about Whitney on this blog back in April. And I’ll close with that. Here’s what I wrote:

…I did animal assisted therapy for eleven years at MCV. While doing that work, I became very close friends with a twelve year old girl and her parents and her brother. I met her on her first admission for a neuroblastoma; she was young and healthy and it went into remission quickly. Ivory and I were still doing pet therapy when she was readmitted five years later with a relapse. We continued to visit as the disease ran its course. She loved dolphins. The last time we visited her she was in the Pediatric ICU; her head was propped up and a tube was vacuuming the saliva she couldn’t swallow out of her mouth. She had dolphin earrings on and Ivory was being present for her; I’m still trying to master that. I couldn’t take my eyes off those dolphin earrings as the jiggled slightly from the vibration of her breathing tube.

Later I took Ivory home. I went up to the Y to swim, so I’d be able to sleep that night. Everyone was gathered around the television. A Virginia Tech senior had just shot and killed thirty-two people then killed himself. That was ten years ago this week. I am still appalled to think about the way I felt standing in that Y. All these people had just been murdered. I could not get the image of those dolphin earrings out of my head. Looking at the people who had been murdered was horrible, watching my friend slowly die was horrible, the fact that I could only direct my full attention to one of those things – and it had to be one of those things – was horrible. That was on April 16 of 2007. We visited the hospital once a month. I don’t recall our May visit. She died on June 10.

Ivory and I did pet therapy for eleven years. So many people changed my life, constantly. The people who are the most unforgettable – like her – are the  ones who have taught you the most.

I am a rehabilitation counselor. I have many friends with autism and traumatic brain injuries. They help me learn new things constantly. I hike with dogs at the James River in Richmond - a lot. I've completed an Iron distance triathlon a year for 11 years. My most recent was in Wilmington, NC in November, 2013. I currently compete in mid-distance triathlons. And work and hike and take pictures and write and eat.
View all posts by Jay McLaughlin →
This entry was posted in Birds, Cessna 172, Dogs, Flowers, Fun, Gardenias, honeysuckle, People, Pony Pasture, raptors, Red-tailed hawks, Rivers and tagged Dogs, Flowers, flying, Gardenias, james river, nature, outdoors, People, red-shouldered hawks, Red-tailed hawks. Bookmark the permalink.

2 Responses to A story I never knew