A year ago this month, I was at a property owners meeting here with my Mom. This is the South Fork of the Shenandoah River in Page County, Virginia. It’s the western border or Shenandoah Gap, a small mountain community where she owned a couple of wooded acres. When she died suddenly in January, this is part of what she left to my brothers and sisters and me. It was a bit unsettling to flash back to a year ago but, as you can see, the view – and the sounds and smells that accompany it – goes a long way toward calming unsettled nerves. Plus I had Mackey and Turner with me (last year too) so it was a positive experience.

The land itself has cash value in the marketplace. But the experiences she and Dad gave us growing up near there – they have infinite value. The feeling I get when I look at that river – and at other rivers – comes straight from the way we were brought up.

Likewise for my experience here:

I can assure you they are honorable animals 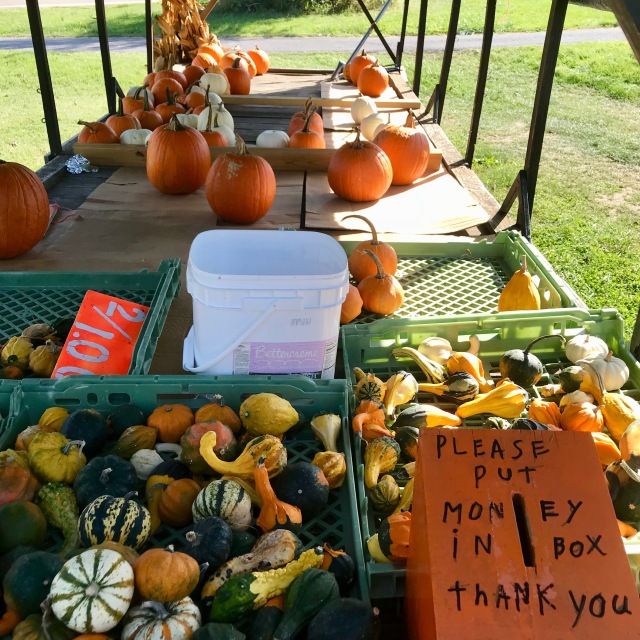 I’ve mentioned in earlier blog posts we heated our cabin up there with a woodstove. I had my first fire of the season Tuesday evening. Our handsome orange cat Dash appreciates many things, but I suspect fires in the woodstove are at or near the top of his list: 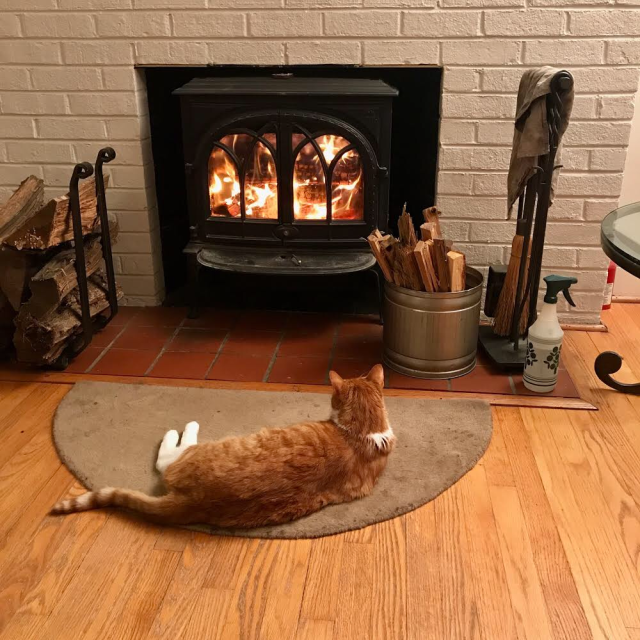 This is a cat who desires nothing

When Mackey and Turner and I were up in the mountains yesterday we went hiking after the meeting. We hiked up to where our property is. Along the way we came to a place where a spring fed creek crosses the trail. Mackey and Turner stopped for a cold drink: 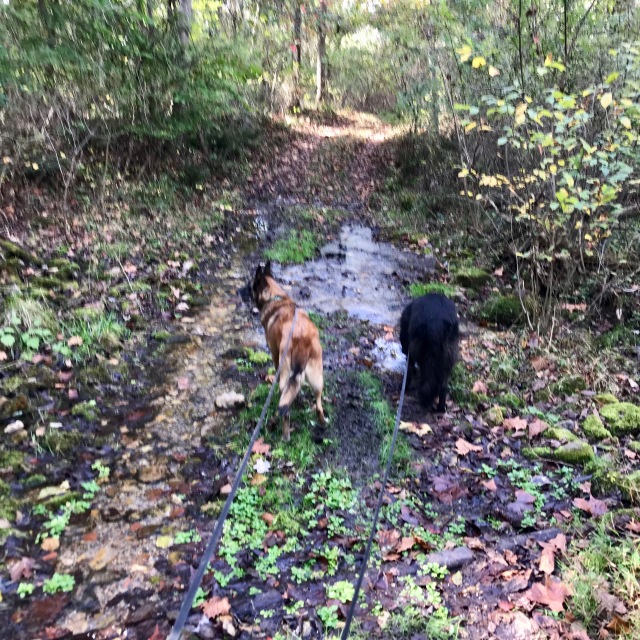 Stopping for a cool drink

Mom wasn’t a true forager, but she’d pick and eat any blueberries or blackberries she saw. This patch of creek was filled with watercress forty years ago, and it still is. You could eat it any time you walked past. I pulled some up and ate it yesterday afternoon. It was cool and spicy and crisp and tasted like fresh outdoor air:

We had old, old friends up there, now long gone, named Doug and Doris. Mackey and Turner and I walked up to visit their old property. This was the barn where they kept their cow Mary Jane. Doug would sit on a stool and milk her into a galvanized bucket. I remember watching him do that in the winter, hearing the jets of milk rattle as they hit the metal, watching the steam rise from the cow temperature milk in the brittle winter air: 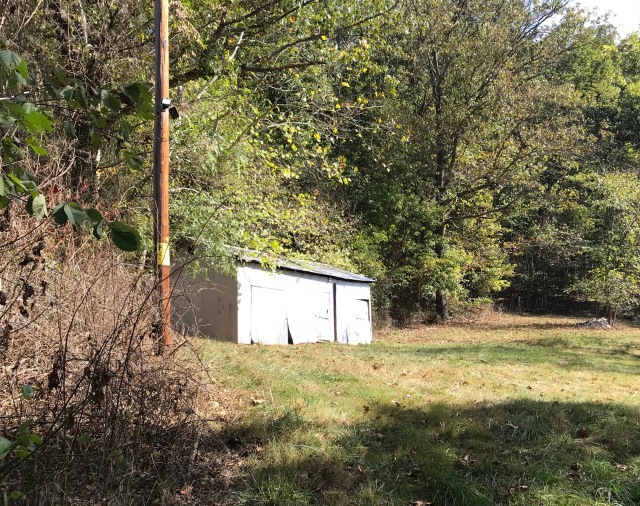 Doug and Doris’s barn – home of their cow and LOTS of hay:

Doris had a butter churn that was a one gallon glass jar with a screw on top and a handle going down to a two-bladed wooden paddle. She’d fill the jar with cream that had separated from Mary Jane’s milk. When you pushed down the paddles would spin one direction and when you pulled up they’d spin the opposite direction. Butter would appear quickly. I will never forget – because this is the kind of weird thing you never forget – a time when a lot of onion grass sprouted and Mary Jane ate it. The flavor of onions in the butter was not overpowering, but it was far too strong to ignore.

Here is a picture of a couple of their sheds. The barn in the last picture is out of sight just to the left. Their house is just to the right. The pig sty was in the right foreground, right behind that little yellow “posted” sign.

Doug and Doris’s sheds; their house is out of sight on the right side

When Doris died I was surprised to learn she wanted my Dad and me to be pallbearers at her funeral. Doris was irreverent, my Dad was irreverent, there was infinite respect but the irreverence was unbroken with both of them. At her funeral there was an open casket viewing and the mourners dutifully walked past the casket to pay their last respects. She died in June of 1999, so it’s been eighteen years. But if I live to be a hundred I’ll never forget. We were in suits, of course, it was silent except for soft murmurs and the occasional sniffle. Maybe a hundred people in there, more or less. Dad’s behind me as we file past the casket and he mutters in my ear “I think that’s the longest I’ve ever seen her with her mouth shut.” I took Mackey and Turner to visit the cemetery where she’s buried on the way home. I couldn’t find her tombstone, but it’s one of these – as good a  place as any other to spend eternity:

If you had to spend eternity here, you could do a lot worse

My love of dogs and cats and of the outdoors comes in equal parts from both Mom and Dad. Mom loved bluebirds too, but Dad was a little obsessed. Bluebirds were purely “his” thing. In the basement of our old house he’d screw together twelve foot long 1 x 6’s and make a long square wooden pipe. Then at regular distances he’d make a diagonal cut, then a straight cut. Yielding two pieces of the square wooden pipe, each with a flat bottom and a sloping top, ready to have a roof screwed on. Mass production of bluebirds houses. Here are a couple of pictures I took at Deep Run Park (of copperhead fame) this week:

Today is October 22 and I took these pictures this morning. Feast your eyes, because we’ll get a frost soon and this will be all over until 2018. Not to worry though – Buffleheads appear on the river at first frost. You’ll be seeing bufflehead pictures on this blog either next week (10/29) or the week after (11/5). Maybe we’ll still have flowers next week. But it’s amazing already. Gardenia and rose from today:

This gardenia bloomed in our backyard this morning. It smells even prettier than it looks if you can imagine

Same time as the gardenia, maybe 10 feet away. Can you even believe that?

Almost forgot – I took my five dog pack to Pony Pasture last week and this week. I can’t tell you how difficult it is to get all five in the frame at once. Took this picture today: 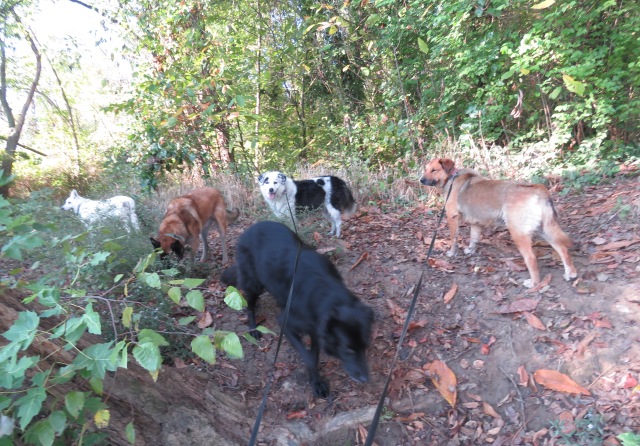