“Momma always said life was like a box of chocolates – you never know what you’re gonna’ get.” – Forrest Gump, 1994 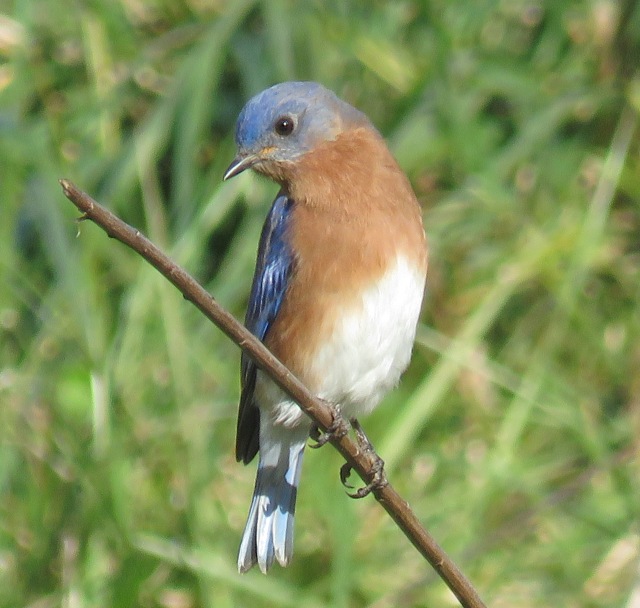 There’s never a bad time to see a bluebird

That’s an Eastern Bluebird (Sialia sialis) in the top picture; I took that picture at 12:08 today at Pony Pasture. This next picture is the one that inspired the title of this post – I didn’t know what I was gonna’ get.

Immature – probably 1st year – Bald eagle. I didn’t know what I was gonna’ get.

We were leaving Pony Pasture at 1:00 this afternoon and I saw a “football in a tree” just upstream from the parking lot. I thought I “knew what I was gonna’ get” – I was positive it was an adult Bald Eagle (Haliaeetus leucocephalus). I pulled over and put my flashing lights on and started snapping and I could see it was not an adult Bald Eagle. The light was not helpful and I guessed I was seeing an out of season osprey because… you never know what you’re gonna’ get. I came home and took a better look (on a bigger monitor) and googled it and it’s an immature Bald Eagle. I think this is the feathering for a first year Bald Eagle but I’m not positive. Since this is my first one ever. Feel free to comment on here or email if you’re more certain and are able to tell with that middling-quality photograph.

Speaking of first birds ever. I told Evelyn on Thursday that I’d seen my first ever Red-winged Blackbird (Agelaius phoeniceus) in the backyard. Then it came around to the front feeders – outside my office window – and I took this picture. And it was not black. I had no idea what it was so I posted it on the Birding Virginia Facebook page and asked for ID. Fortunately my friend Kim identified it thus: “Red-winged blackbird. Young male, I believe.” That’s first for me in my yard – I’d never seen a Red-winged Blackbird of any age here. You never know what you’re gonna’ get: 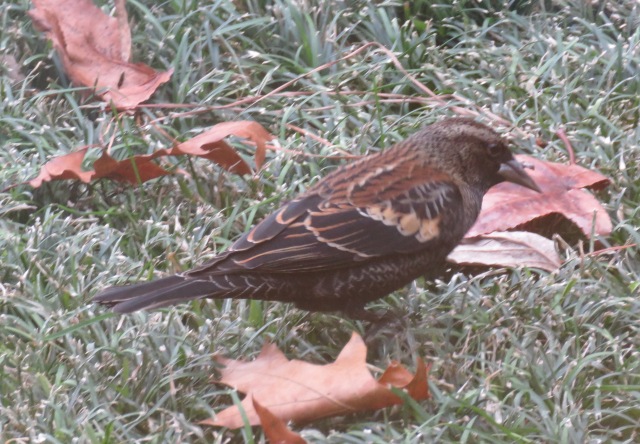 An immature male Red-winged blackbird, as it turned out

More often, of course, after a while, you do know what you’re gonna’ get, or at least you  have a pretty good guess. There’s not a 100% chance you’ll see a Great Blue Heron (Ardea herodias) every time you visit Pony Pasture (they’re not Canada Geese), but they’re a regular visitor. I saw two today, one near the parking lot and one farther downstream. This was the former:

This picture is not crisp, but I’m including it to show how close these birds are sometimes. It’s easy to see the  pair of Mallards (Anas platyrhynchos) in the lower left corner. Just look diagonally opposite them in the upper right; it blends in well but it’s easy to see the Great Blue Heron in the opposite corner: 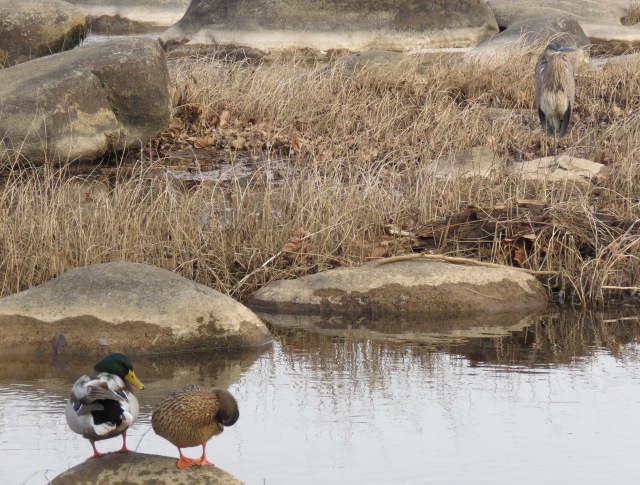 When I get an accipiter – a Sharp-shinned Hawk or a Cooper’s Hawk – I am caught by surprise every time. Accipiters always move. They hunt mainly birds. I can predict buteos – a Red-tailed Hawk or a Red-shouldered Hawk – because they are creatures of habit. Buteos hunt mainly small mammals. But this accipiter – I’m not sure if it’s a Sharp-shinned or a Cooper’s – flew over my head and landed in a dogwood tree two blocks from my house on Wednesday. With a buteo you often have ten or fifteen minutes to get the image you want. With an accipiter you’re fortunate – in my experience – to get ten or fifteen seconds. I’m always grateful though: 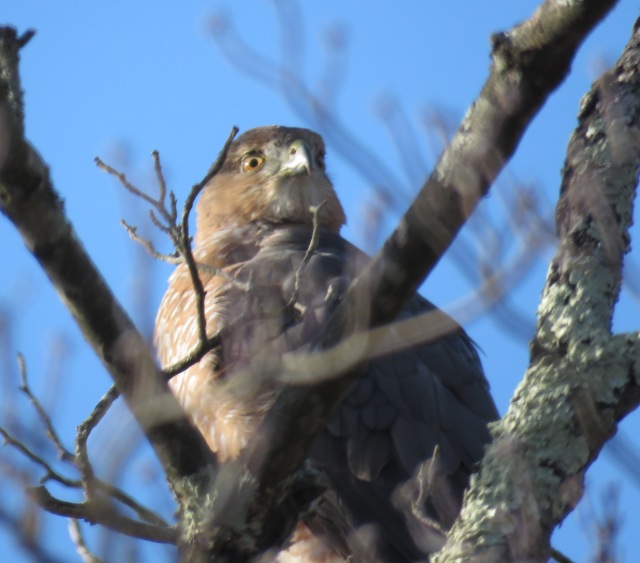 I often do know what I’m gonna’ get – as do readers of this blog – when it comes to Red-tailed and Red-shouldered hawks. They may be featured more often than any other bird on this blog. This Red-shouldered hawk was perched in a poplar tree near the swamp on Patterson Avenue, just west of Pump Road at 9:30 Wednesday morning:

Pretty hawk (Red-tailed) and sky, but the perch is inelegant 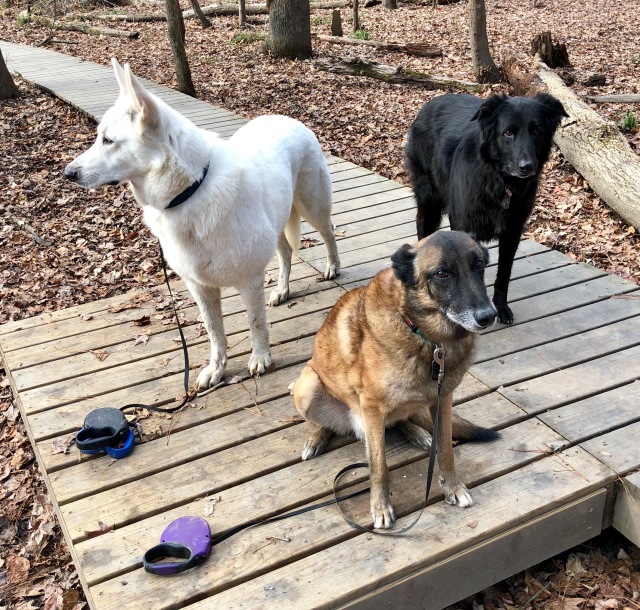 Yuki (white), Turner (brown), Mackey (none of the above)

Dash gets a little blog time, but not as much as Mackey and Turner and Yuki. It doesn’t bother him a bit. Here’s one of him on a chair in the living room and another lying on the carpet in front of the fire. On instagram I captioned the second picture #shameless: 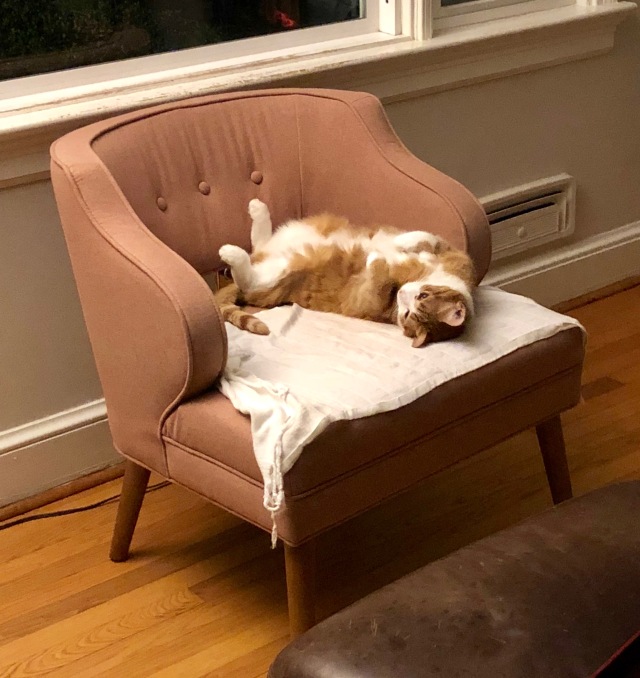 The word “anxiety” is not in Dash’s vocabulary

I open many blog posts with a picture of the river; today I’ll close with one. Enjoy – and come back next week! All best, 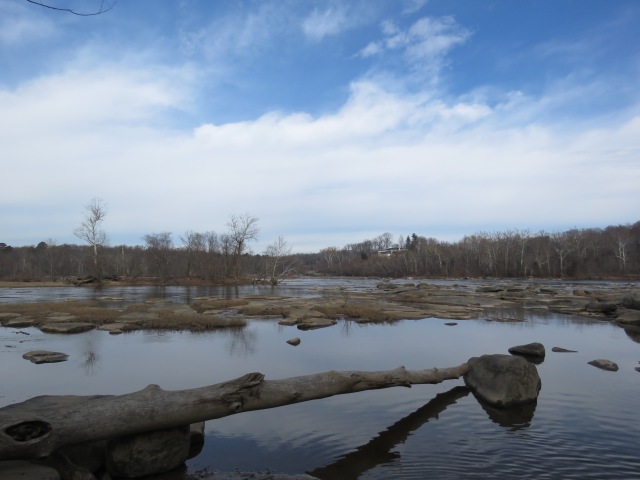 Do you know when the river looks bad? I’ll tell you when: never

I am a rehabilitation counselor. I have many friends with autism and traumatic brain injuries. They help me learn new things constantly. I hike with dogs at the James River in Richmond - a lot. I've completed an Iron distance triathlon a year for 11 years. My most recent was in Wilmington, NC in November, 2013. I currently compete in mid-distance triathlons. And work and hike and take pictures and write and eat.
View all posts by Jay McLaughlin →
This entry was posted in Bald eagles, Birds, cats, Dogs, Fun, James River, Pony Pasture, raptors, red-shouldered hawks, Red-tailed hawks, Rivers, Smiles (including "dog smiles"!) and tagged bluebird, Dogs, Fun, james river, nature, outdoors, Pony Pasture, red-shouldered hawks, Red-tailed hawks, Rivers, Smiles - human AND dog smiles!. Bookmark the permalink.

4 Responses to Box of chocolates