You can’t buy this on Amazon

You can buy pictures on Amazon. But you can’t buy the experience of being on that river bank

I’m 56 years old and this will by my first Christmas without a living parent. Mom was enthusiastic and ebullient and feisty and celebratory a year ago this week. On January 4 of this year – it’s hard to believe 365 days have not passed – she died suddenly in her sleep.  In her own home and in her own bed – just the way she (and we) wanted it. I’ll add a few words at the end of this post, after the usual detritus.

This is what inspired this thought and title and blog post. I’ll address it a bit before I finish:

Mackey and Turner and Yuki and I went to the river this morning. I was looking for footballs in trees, and we walked right under this nest. It’s a wasp nest or a hornet nest or I don’t know – if you know, please inform me. If I change it, I’ll credit you, but I’ve been slow on that lately. Here’s the nest from about 11:30 this morning:

[[Update from my friend Kim; she put this on facebook last night: “The bald-faced hornet, which is technically not a hornet, makes that nest. Short version, all hornets are wasps, and none are native to the US, though the giant ones called European hornets are found here now (the only true hornets found here.)” She went on to provide this helpful link from, of all people, Colonial Pest Control, Inc: WHAT MAKES THOSE BIG, PAPER NESTS IN TREES?]]

I saw a similar nest, only in better light, three years ago near the Williams Island dam. At that time I assumed it was a hornet’s nest; today I’m less certain. No one corrected me about it in 2014. If you’d like to see that 2014 nest, plus a couple of Pileated woodpeckers, a squirrel cowering beneath a hawk, and a short slow motion video of Turner bounding across our backyard, I invite you to visit (or revisit) Stirring up a hornet’s nest from November 16, 2014.

The weather in central Virginia has not been frightful this week; I’ve ridden my bicycle a time or two at West Creek. I saw and heard these killdeers shrieking and scrambling along the banks of the eastern lake at West Creek Tuesday afternoon: 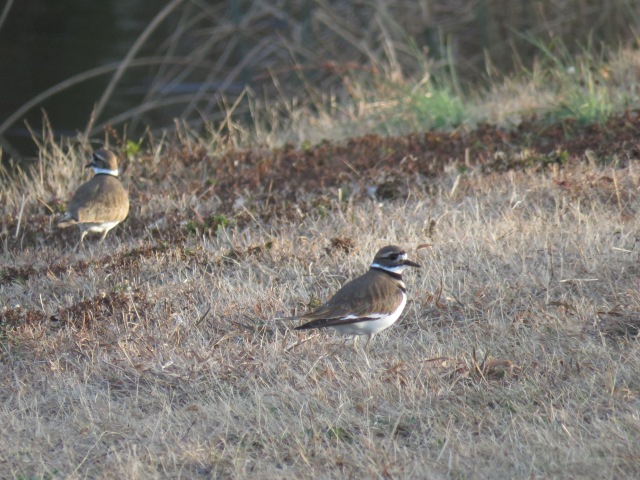 Two noisy killdeers in the fading light at West Creek

Twenty-four hours later this Red-tail gazed down at the parking lot of the Westbury Apothecary. It could easily see the chimney of our house half a mile to the east:

Regal Red-tail in sharp relief against a flawless blue backdrop

When we see crowds of gulls on the river in winter, they’re often Ring-billed gulls (Larus delawarensis). The Cornell Lab of Ornithology says Ring-billed gulls are  “Comfortable around humans, they frequent parking lots, garbage dumps, beaches, and fields, sometimes by the hundreds.” We saw big flocks of Ring-billed Gulls, but we also saw this large gull alone on a mid-river rock. This is a Great Black-backed Gull (Larus marinus ):

This is what the Cornell Lab says about Great Black-backed Gulls: “The king of the Atlantic waterfront, the Great Black-backed Gull is the largest gull in the world, with a powerful build and a domineering attitude. They harry other birds to steal their food and even hunt adult birds such as grebes and puffins.”

Evelyn was staying at Yuki’s house last night. She took this picture of the four of us just before we left for the river this morning:

Mackey, Turner, Yuki and me departing for the wilds of the James River Park. Photo by Evelyn! Thank you Evie!

Merry Christmas tomorrow if that’s your thing. If it’s not, by all means have an excellent December 25 and an even better week. And come back here a week from today for the final blog post of 2017! Have a great week,

You can’t buy this on Amazon

Mackey and Turner and I hike every week or so with a friend named Sam. Some weeks we hike at Pony Pasture, some weeks at Sunday Park in Brandermill. Sam’s in middle school but he already takes pictures any adult would be happy to get. I let him carry my camera while we were hiking at Pony Pasture in November. Sam took this picture:

It was a brilliant photograph and a gorgeous memory from an autumn afternoon spent hiking on the riverside. I emailed it to his parents. They had it made into stationery and he gave it to me for Christmas! I’m standing there in the parking lot thanking him and simultaneously thinking how much my parents would have loved to get these cards.

When Mom died last year, my siblings and I spoke afterward about our combined sense of grief and relief. It was completely unexpected – she was 100% herself when she went to sleep that evening – but it was just the way she wanted it. At home, in her own bed, with family around, and I suspect no real pain. And since it was the way she wanted it, it was the way we wanted it. But when Sam handed me those cards, with the image he’d captured of an excellent afternoon at the river, I thought in an instant how happy I would have been to send one to Mom. Dad would have liked it as much or more.

That’s the cool thing about gifts you can’t buy on Amazon – they’re priceless.

I am a rehabilitation counselor. I have many friends with autism and traumatic brain injuries. They help me learn new things constantly. I hike with dogs at the James River in Richmond - a lot. I've completed an Iron distance triathlon a year for 11 years. My most recent was in Wilmington, NC in November, 2013. I currently compete in mid-distance triathlons. And work and hike and take pictures and write and eat.
View all posts by Jay McLaughlin →
This entry was posted in Birds, Dogs, Fun, James River, People, Pony Pasture, raptors, Red-tailed hawks, Rivers and tagged Dogs, Fun, james river, nature, outdoors, People, Pony Pasture, Red-tailed hawks, Rivers, smile, Smiles - human AND dog smiles!. Bookmark the permalink.

3 Responses to You can’t buy this on Amazon