Here’s one “thing with wings” – a Purple Martin (Progne subis) – holding another “thing with wings” – a recently deceased male Common Whitetail Skimmer (Libellula lydia). This was yesterday (Saturday, 6/8/2019) at Bryan Park at noon. I believe the Purple Martin is a female, but it could be a first year male. Purple Martins only eat flying insects – no seeds, no ants, no caterpillars, minnows, ticks, flowers, leaves, worms, snails – only flying insects. So check this out:

Purple martin with a dragonfly in its mouth

I took this one just seven minutes later on top of the same house. For all I know she’s in this crowd. I count five purple martins in this picture. Three of them have winged insects in their mouths. I pinch myself at my good luck every time I’m fortunate enough to witness something like this: 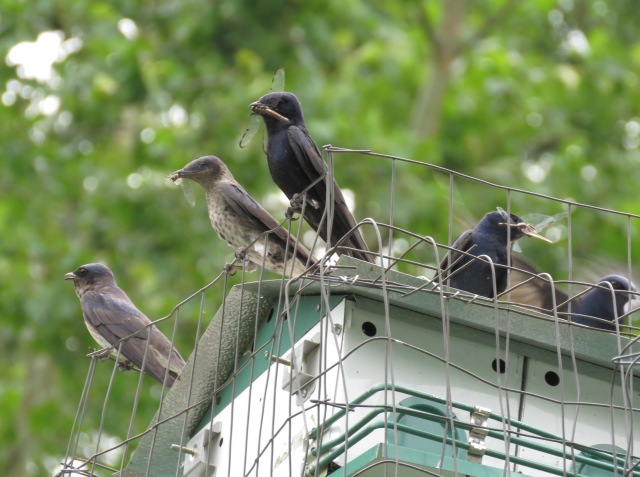 Five purple martins, including three with dragonflies in their mouths!

These images are, from a human (mammal) perspective easy to look at. I’ve also photographed snakes eating fish which is also just (for me) curiosity inducing. I photographed a Cooper’s Hawk with a dead starling and a Red-tailed hawk with a dead rabbit. Those were harder to look at than dead dragonflies and fish, but not terribly upsetting. But last year I zoomed in for a crisp image of a Red-tail on a branch with a young chipmunk it had just killed. It was amazing how sad that was – I would never have posted it on this blog (or anywhere else). That little chipmunk looked so forlorn. But it’s no different! A purple martin killing a dragonfly is trying to feed itself and its young – same as a Redtail killing a chipmunk. Survival of the fittest. It is never pretty.

Monday at Bryan Park at around 1:30 I photographed this fledgling Purple Martin. The light was great and it was out in the open – I like this image:

Dragonflies probably laugh at this bird. But not for long.

I regret that I was unable to get a male purple martin standing on top in good light, but this will have to suffice. Their rich, glossy adult plumage looks good in any light, even “behind bars.” Adolph White put up the martin houses at Bryan Park several years ago. Cooper’s Hawks (Accipiter cooperii) would camp out (in a manner of speaking) in the big oak trees overlooking the martin houses and pick off unsuspecting purple martins at will. That will drive a nesting site right out of business, so Adolph put up that wire to foil the hawks. The colony is thriving.

This time of year, bugs and insects are also thriving, and with its generous lakes and streams, Bryan Park provides a home for untold thousands. Or millions. The purple martins are fat and well fed and healthy, and there are plenty of insects to feed their offspring. On the same day (Monday) that I photographed the purple martin fledgling, I also saw two toads – who eat even more insects, though probably not as many of the flying variety. Here are two pictures I took. I think they’re both Fowler’s Toads (Anaxyrus fowleri) but I am not an expert at toad ID. They may also be American Toads (Anaxyrus americanus). If someone knows which is which, put a comment in the comments section at the bottom of the blog or shoot me an email. I’ll credit you!

I saw this one around 1:30 and the second one about fifteen minutes later: 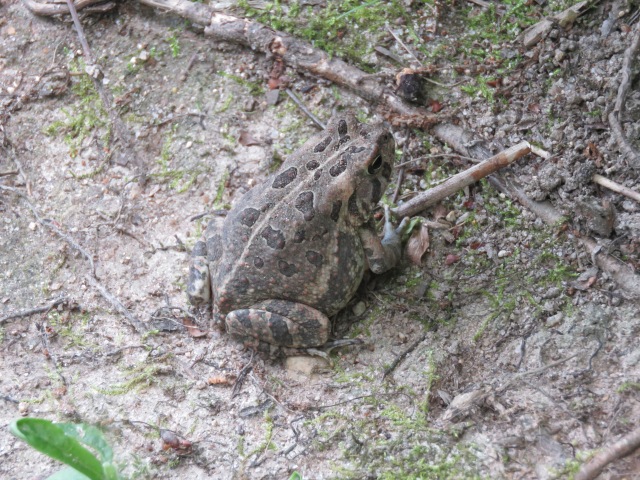 Bryan Park toad, not long after the Purple Martin pictures

Second Bryan Park toad, not long after the first one

I believe they are just two different color variations of the same type of toad. But don’t take my word for it.

The raptors have been either hiding out or everywhere I turn this year. This week they were everywhere I turned. I think the young are getting really big and there’s no room in the nest, and I also think the young are learning to fly. I’m noticing details I was unaware of when I began this mildly obsessive hawk pursuit around four years ago. Now the youngsters look gangly and unsteady and carry themselves in a manner common to adolescents of (I suspect) every living animal. Adult red-tails are gracefulness and economy of movement made flesh; they don’t waste even the slightest movement. But adolescent red-tails have angles and bones protruding where angles and bones shouldn’t protrude, and they tip when they move around on a perch. I don’t think adults even move around on a perch. They just land, and sit and watch for a while, then they fly again.

I got a lot of pictures of Red-tails this week, but none were particularly memorable. Here are two from Thursday; same bird. You can see in the second picture how awkward and uncertain it is. Adults never (from what I’ve seen) contort themselves in quite this fashion). Adolescent red-tail perched:

When a bird (or a deer, snake, turtle, chipmunk, anything) makes an impression on me like that, I make long notes. Here’s what I wrote to myself about that bird on Thursday: “I think it’s young, they don’t look strong or confident, they look skinny and uncertain, like a 13 y.o. boy, or anyway like I was when I was a 13 y.o. boy. A great deal of what is obviously wasted motion/energy – they’re inefficient. They’ll learn.”

Red-shouldered hawk perched on the cross at the Brandermill Church

I hiked around for ninety minutes and came back. The hawk left and this Black vulture (Coragyps atratus) landed on the same cross, other side. My first ever Black vulture on a church cross: 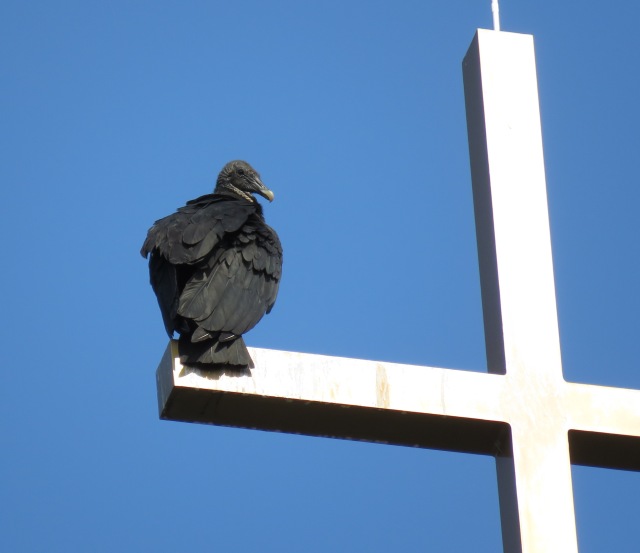 I was glad we hiked yesterday; today was a rainout. My grass is sure green and lush for the second week in June. Hopefully a few more pictures next week!

PS I nearly forgot – RAAM, the Race Across America begins Tuesday, 6/11/2019 in Oceanside, CA. It begins at 12:00 noon Pacific Daylight time, or 3:00 PM Eastern Daylight time. The record finish time is just under eight days, so the winner (it’ll be Christoph Strasser unless he crashes) will cross the finish line in Annapolis, MD sometime near midday on Wednesday, 6/19/2019. Teams may finish ahead of him, but no individual racer will even be in the same time zone – seriously – when he finishes. Check in on it sometime – it is a feat of human endurance unlike any I’m aware of. Have a great week!

I am a rehabilitation counselor. I have many friends with autism and traumatic brain injuries. They help me learn new things constantly. I hike with dogs at the James River in Richmond - a lot. I've completed an Iron distance triathlon a year for 11 years. My most recent was in Wilmington, NC in November, 2013. I currently compete in mid-distance triathlons. And work and hike and take pictures and write and eat.
View all posts by Jay McLaughlin →
This entry was posted in Birds, Black vultures, Bryan Park, Fun, Insects, James River, raptors, red-shouldered hawks, Red-tailed hawks, Rivers, Smiles (including "dog smiles"!) and tagged Black vultures, bryan park, Fun, nature, outdoors, RAAM, Race Across America, red-shouldered hawks, Red-tailed hawks, smile, Smiles - human AND dog smiles!. Bookmark the permalink.