Turner and I are creatures of habit 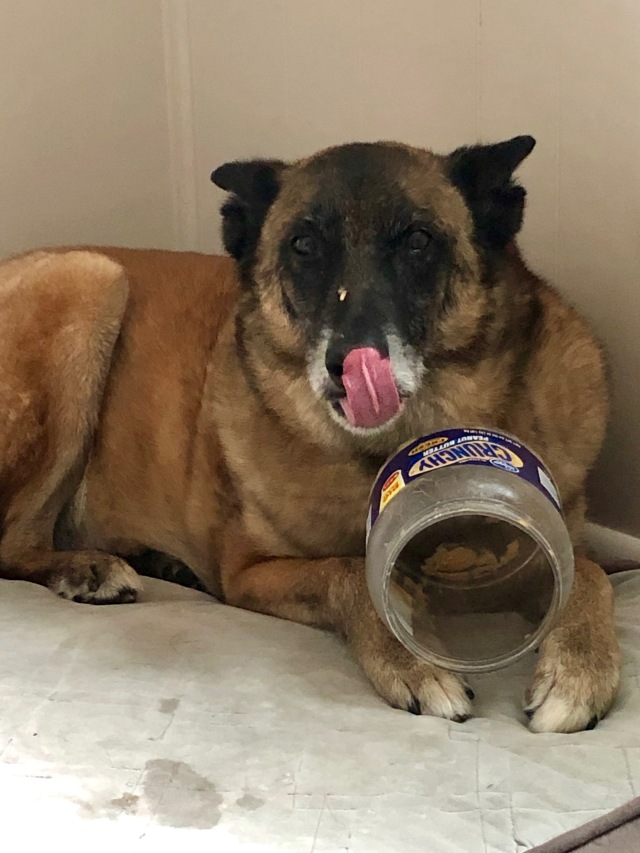 I gave Turner the empty PB jar to “lick the bowl.” Ev snapped this picture:

Evelyn took that picture Wednesday and it was too great to not put in this blog post. I didn’t even know I had it when I started this post.

Turner is reliable and predictable; he’s a pure creature of habit, one the qualities that helps make good guard dogs. Though you’d never know it (the guard dog part) from meeting Turner. But the last thing he and Mackey and I do before we go to sleep at night is take a walk around the block. It’s night, typically around 10:00. When we get home, Mackey usually goes right in the house, but Turner makes a loop through our dark backyard to make sure nothing is amiss. You can practically set your watch by how long it takes him.

Last night we got back and Mackey and I went in the house and Turner made his rounds of the backyard. He usually takes two or three minutes. There’s a bird feeder back there and the fallen seed attracts visitors at all hours. Anyway, it had been more than ten minutes and Turner wasn’t in the house. He would have come in if I’d asked him to, but I knew he’d found something  interesting so I took a flashlight and went out. He was near a big spreading bush next to the woodpile, and when I shone the flashlight under it I saw this opossum “playing possum”:

Since I 1. feed birds and 2. walk dogs at night, that’s the second time I’ve had an opossum in my yard “playing possum.” They really, really look dead. But if you come back an hour later, they’re gone. They eat ticks! In addition, of course, to spilled bird seed.

Turner and I went back indoors; it was gone in the morning.

I was scheduled to fly twice this week, but the weather came unraveled Thursday so I only flew Tuesday. An excellent flight, though. My instructor Joel and I flew to KMFV, Accomack County Airport. We flew in N162SF, one of Hanover County Airport’s (KOFP) Tecnam P92 Eaglets. A plane I enjoy more every time I fly:

Tecnam P92 Eaglet at Hanover Airport. That is what good flying weather looks like.

It’s about ninety miles from Hanover to Accomack. The last section of the flight is over the Chesapeake Bay, and pilots of single engine planes like to cross at a high altitude in case of engine failure. You can glide farther. So we gradually climbed on our way there, and crossed the Bay at 5,500’. Accomack is on the Eastern Shore of Virginia, a moderately narrow peninsula. So when we came home, we flew circles over the airport so we could climb high enough to make it back worry-free. It takes a few minutes of circling, so Joel asked if he wanted me to let him fly the plane while I took a few pictures. Here’s a picture I took a few minutes after we took off:

Climbing out above runway 03/21 at Accomack Airport, KMFA

The runway is 03/21 (the two runway compass headings, with the zero at the end cut off) and it’s 5,000 feet long by 100 feet wide. That’s almost precisely the same as Hanover, and it’s way more than twice as much runway as you need for a tiny little plane like a Tecnam.

At home I got a poorly lit picture of a pair of red-tails on the tower. I didn’t realize it was a pair until I looked later. One stayed on the tower while the other set off in search of something tasty to eat:

Years ago I took a picture of a Red-tail that had carried a rabbit up to a tower. It was July and the hawk was panting visibly. I’ve only seen that once. I also think Red-tails eat a lot of animals that have been hit by cars, and I suspect that’s what happened then. A saw this rabbit in my neighborhood Wednesday morning on my way to work. I am quite confident it didn’t get hit by a car or eaten by a hawk:

I’ve been more disorganized than usual this week! So I’m going to bed! All best,

I am a rehabilitation counselor. I have many friends with autism and traumatic brain injuries. They help me learn new things constantly. I hike with dogs at the James River in Richmond - a lot. I've completed an Iron distance triathlon a year for 11 years. My most recent was in Wilmington, NC in November, 2013. I currently compete in mid-distance triathlons. And work and hike and take pictures and write and eat.
View all posts by Jay McLaughlin →
This entry was posted in Birds, Dogs, Fun, kofp, love, raptors, Red-tailed hawks, Rivers, simplify, Smiles (including "dog smiles"!), Tecnam and tagged Flowers, Fun, james river, nature, outdoors, People, Pony Pasture, Race Across America, Red-tailed hawks, smile, Smiles - human AND dog smiles!. Bookmark the permalink.