The light made photography effortless again this week; I’m always grateful. But I get lazy! I also can never decide which picture I like best. My favorite photography subjects, raptors, have been all over town this week. I even got some ospreys I hadn’t gotten in some time. My memory card runneth over with pictures of Red-tails from this week. It’s tough (for me) to pick a favorite, but I got real close to this one in good light so I’m going to go with it. This is at the very western edge of Westhampton Memorial and Cremation Park, 10000 Patterson Avenue in Henrico:

Notice the blue eyes? I think this is a first year Red-tail.

Eleven minutes earlier (precisely) I’d been standing at the end of the driveway at St. Bartholomew’s Episcopal Church, 10627 Patterson Avenue in Henrico – just up the street. I don’t know if the hawk caught the squirrel of if the squirrel got hit by a car and the hawk grabbed it. However it came about that hawk was clutching this squirrel, it’s safe to say all of that squirrel has become part of that hawk:

Red tailed hawk with gray squirrel about to become breakfast

Squirrels will never be safe from cars, but they’ll always be safe from ospreys. If it doesn’t have scales and gills, ospreys aren’t interested. I was over in BonAir early (-ish) Tuesday morning and on my way home saw an osprey on a familiar nest near Fulton Bank in Stony Point. I was parked at 9030 Stony Point Parkway to take this picture:

Fighter pilots were warned to “Check 6” or look at the 6 o’clock position (behind them) for unexpected attacks. That’s probably not why this osprey is checking 6.

The last image I took there was at 8:16. Then I drove north across the Willy Bridge and eight minutes later (8:24) snapped my first picture of two ospreys on a nest across Parham from West End Assembly of God. Evelyn was by there earlier today and saw three on the nest at the same time. But they’re all big now. When I visited, probably one bird was out hunting. Or, more properly, since they’re ospreys, fishing. Here’s a picture I took of a pair:

A pair of ospreys near West End Assembly of God, but Evelyn tells me she’s seen more on that nest

Yuki’s taking a little summer break so Mackey and Turner and I are going to the river on the early side to avoid the heat. We arrived at the intersection of River Road and Huguenot Road and this doe and fawn were ambling across the parking lot near BB&T and headed across Huguenot Road toward Schwarzchild jeweler (6000 River Road). I took five  pictures in under two minutes. Both deer got around the guard rail and into the woods. They’re safe in there; it probably takes them ~2 minutes to cross the train tracks and get to the river’s edge. I snapped this picture with my phone (in the parking lot) when I first caught a glimpse: 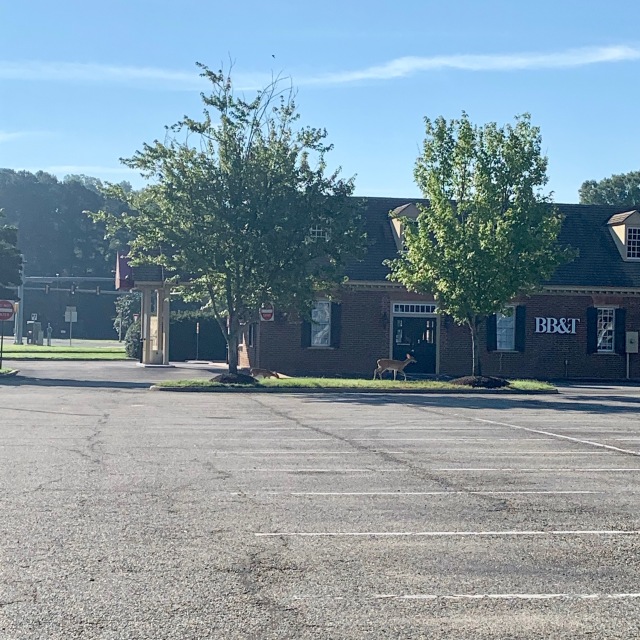 See that little deer? On the grass? Directly in front of the bank door? Boy this is an excellent time to be alive.

Here’s the first picture with my real camera, to give some idea of the setting. This was a petite doe, presumably the mother:

Sauntering and/or ambling toward the road:

A moment later, she and a passing cyclist paused to consider their great good fortune at crossing paths this fine Sunday morning:

Probably the biker was happier than the deer. But this was not traumatic for the deer:

In the next image, her offspring has joined her at the edge of the road to get its nerves up to cross:

Parent and offspring about to have a road crossing safety lesson. It went well. I watched until they were all the way across and in the woods.

I would totally think twice about crossing that street too, even if my mother was there to make sure it was safe:

It was a pleasant morning and the traffic was light, but I suspect this fawn was a little anxious.

They both disappeared into the brush:

That was a nice, nice, nice way to start a Sunday morning.

I’m just going to wrap up with a couple pictures of shadows in our living room. When the dogs were at the groomers Tuesday – I am not making this up – the sun shone through our living room window through the leaves of this lush philodendron. I regret not photographing the sun on the leaves:

The sun shining through the leaves made this cool dog shadow, since Turner and Mackey were not around to keep us company: 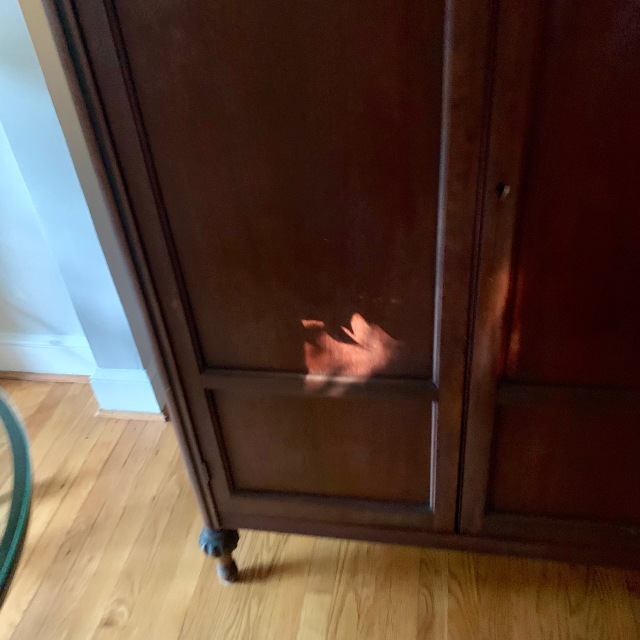 Dog shadow closeup. I don’t think this ever happens when Mackey and Turner are home.

Have an excellent week! Come back next week! All best,

Oops! Almost left a picture off. The river is getting its colorful summer look, blue water reflecting a blue sky with bright green plants and a bit of muddy granite to add balance:

All of it – us, the churches, ospreys, deer, everything – all here because of this river. I’m happy every time I look at it.

I am a rehabilitation counselor. I have many friends with autism and traumatic brain injuries. They help me learn new things constantly. I hike with dogs at the James River in Richmond - a lot. I've completed an Iron distance triathlon a year for 11 years. My most recent was in Wilmington, NC in November, 2013. I currently compete in mid-distance triathlons. And work and hike and take pictures and write and eat.
View all posts by Jay McLaughlin →
This entry was posted in Birds, Fun, James River, love, ospreys, People, Pony Pasture, raptors, Red-tailed hawks, Rivers, simplify, Smiles (including "dog smiles"!), Starbucks, Trains, whitetail deer and tagged Dogs, Fun, james river, nature, Ospreys, outdoors, Pony Pasture, Red-tailed hawks, Rivers, whitetail deer. Bookmark the permalink.