Some things in life can be improved…

…but this weekend wasn’t one of them! Evelyn’s birthday was this weekend and her sister Jackie came down from NJ to help us celebrate. Evelyn and Jackie and Ariel and I went out to The Boathouse at Rocketts Landing for dinner last night and took this 4x selfie:

Yuki didn’t join us on our walk this morning, but aside from that glaring omission, our hike at the river this morning could not be improved. Look at Mackey and Turner on a rock just as we arrived at Pony Pasture this morning: 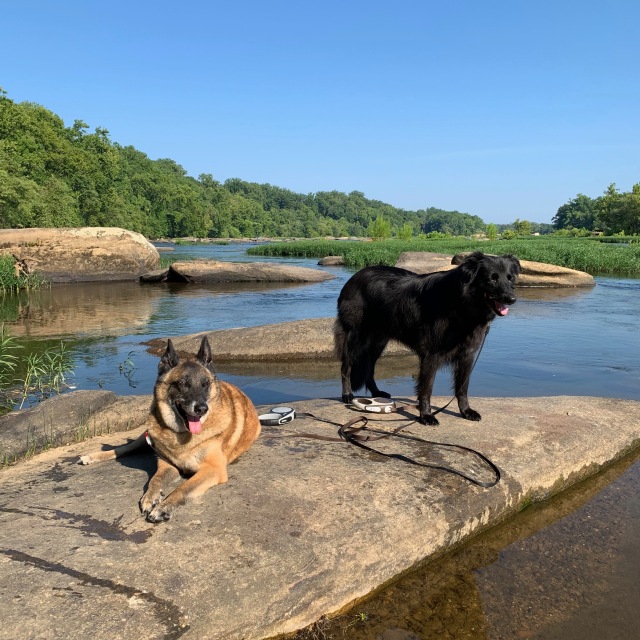 Since this weekend was the fiftieth anniversary of Apollo 11 landing on the moon, Ev suggested I include my “blue moon” picture from August of 2015:

For a little moon shot history in our family, one of my brothers was born the same date (not the same year) Apollo 11 launched from Cape Canaveral and another of my brothers was born the same day (different year) that Neil Armstrong stepped off the ladder from the lunar module to the moon’s surface. I was a young boy, but I clearly remember watching it on our first color television in the knotty pine paneled basement of the house where I grew up in Silver Spring, MD. A.k.a. “The house with the good basement.”

I learned two new things about Neil Armstrong while researching this blog post. He had a son then a daughter then another son. But, sadly, his daughter died from a brain tumor when she was only three years old. The second thing I learned was his family’s request when he died during heart surgery at eighty-two years old. His family released a statement that said “For those who may ask what they can do to honor Neil, we have a simple request. Honor his example of service, accomplishment and modesty, and the next time you walk outside on a clear night and see the moon smiling down at you, think of Neil Armstrong and give him a wink.” Sometimes I’m so happy to stumble across stuff like this when I’m doing my blog posts. It’ll be too cloudy to see the moon tonight but I’ll think about that next time I see the moon. Maybe I’ll get another moon picture up here next week.

I saw this squirrel stretched out trying to beat the heat Monday at Deep Run: 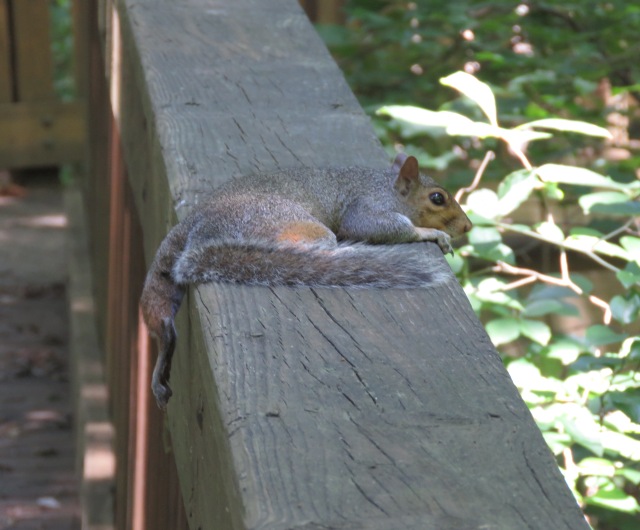 This is how squirrels cool off when it’s hot. It jumped up and ran off a moment later.

That was Monday. I was in the same spot – right where this squirrel was – on Friday and I looked down about ten feet at the tangled forest floor. I was looking for snakes – they’re currently hiding from me – and saw a box turtle! Mammals are unfond of hot weather, and it’s amazing how often I see birds panting. I mean, birds panting – who would have imagined? I wouldn’t have, anyway. But I’ve photographed a Red-tailed hawk panting after carrying a dead rabbit up to a high perch on a July day – panting like nobody’s business. And I’ve photographed ospreys panting on their nest many times. I photographed crows panting (not a great picture) earlier this week, and just today I had starlings panting on my feeders. But anyway, reptiles I presume enjoy the heat. Skinks are sure fast moving and a challenge to photograph when it’s hot. This Woodland Box Turtle (Terrapene carolina carolina) was munching a mushroom on the ground about ten feet below us. I walked down and walked over to it for this imperfect image. It was so hot – and not a breath of wind:

Box turtle gobbling up a mushroom

I recently finished a book called Late Migrations: A Natural History of Love and Loss by Margaret Renkl. It has a lot, lot, lot of short, crisp, informative essays about all manner of subjects. One is called “Things I knew when I was six” followed by “Things I didn’t know when I was six.” There’s a chapter called “To the bluebirds” and one called “In Which My Grandmother Tells the story of Her Brother’s Death.” In a chapter called “Encroachers,” she talks about starlings, and writes “the starlings don’t belong here,” because they’re non-native (they’re European Starlings (Sturnus vulgaris)), an invasive species. She says that “they are aliens here.” But she goes on to write that “The alien does not know it’s an alien.” She goes on to describe the undeniably sad death of a starling in her yard and say “I can only pity it.” I’m looking at starlings on my feeder this minute – as I type this sentence. I think a lot about that “the alien doesn’t know it’s an alien.” I am a caucasian human male in North America – the most destructive invasive species in the history of invasive species. Comparing the destruction my species has done to the destruction starlings have done is like comparing the sun to a candle. I don’t love having starlings on these feeders. But I also don’t love feeling like a hypocrite. One morning when there’s one out there in pretty light I’ll get a nice picture.

Too much rumination and not enough photography this week! 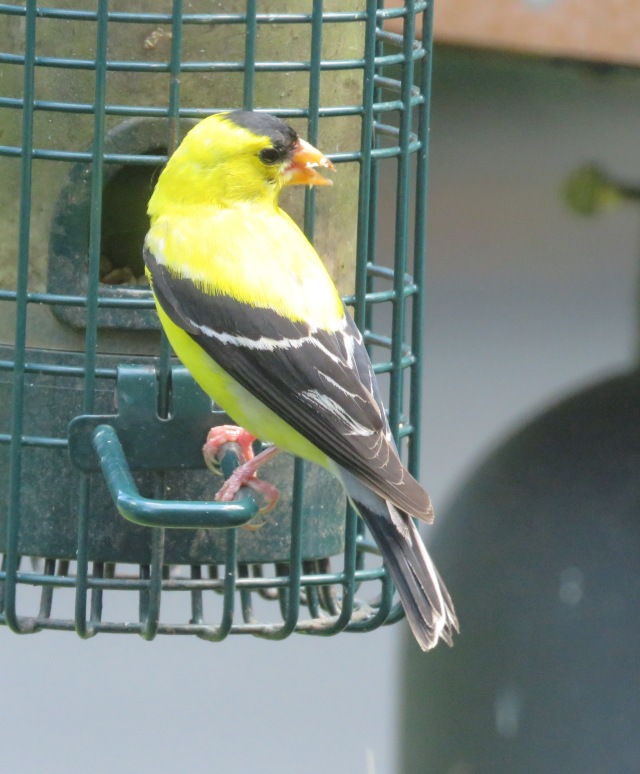 I got one other picture the same day as that goldfinch picture that came out pretty well. It’s not framed just right but it captures (IMO) the essence of a male Northern Cardinal: 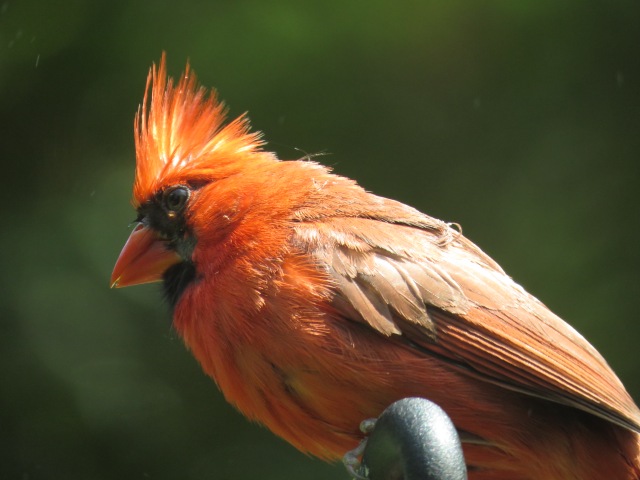 BRIGHT! The second of three primary colors I saw on my bird feeder today

For some reason – I don’t recall why – I stumbled across this old picture of my dogs Ivory and Nicky in Montana in 1999. Twenty years ago! This spot is called “The Rims” and it’s a prominent and startling and lovely and imposing and unique feature at the edge of town. We spent a lot of time hiking up there that summer: 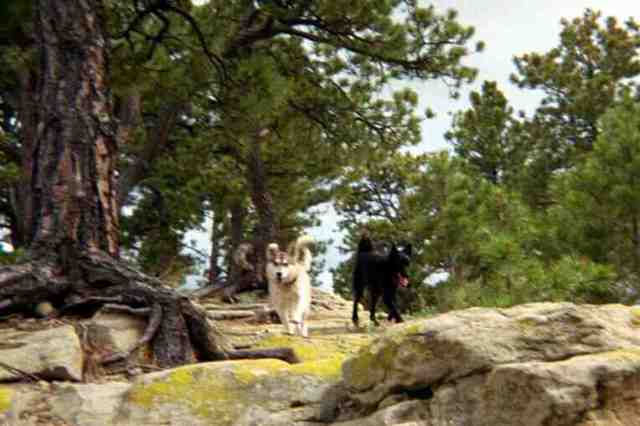 Ivory (left) and Nicky (black and difficult to see) on the Rims in Billings, MT, twenty years ago this month!

It’s been a great and busy weekend. I was so happy that Jackie joined us for Evelyn’s birthday – I hope she comes back soon! And I hope you do too!

I am a rehabilitation counselor. I have many friends with autism and traumatic brain injuries. They help me learn new things constantly. I hike with dogs at the James River in Richmond - a lot. I've completed an Iron distance triathlon a year for 11 years. My most recent was in Wilmington, NC in November, 2013. I currently compete in mid-distance triathlons. And work and hike and take pictures and write and eat.
View all posts by Jay McLaughlin →
This entry was posted in Birds, box turtle, cardinals, Dogs, Flowers, Fun, James River, love, moon, People, Pony Pasture, Rivers, simplify, Smiles (including "dog smiles"!), Turtles and tagged Dogs, Flowers, Fun, james river, nature, outdoors, People, pictures of the moon, Pony Pasture, Rivers, smile, Smiles - human AND dog smiles!. Bookmark the permalink.

3 Responses to Some things in life can be improved…