Posted on September 1, 2019 by Jay McLaughlin

In the decades our cabin in Virginia’s Shenandoah Valley was our home away from home, quirky memorable events occurred more often than it seems they should have. But our family of seven healthy, active people behaved (and behave) in quirky, memorable (IMO) ways more than chance might predict. I’ll jot down a quick story at the end of this post. After the usual.

I would like to have had the caterpillar more in the foreground in this picture, but I have to take what I can get. This is a monarch butterfly just outside my office window, with a caterpillar inching up a branch behind it: 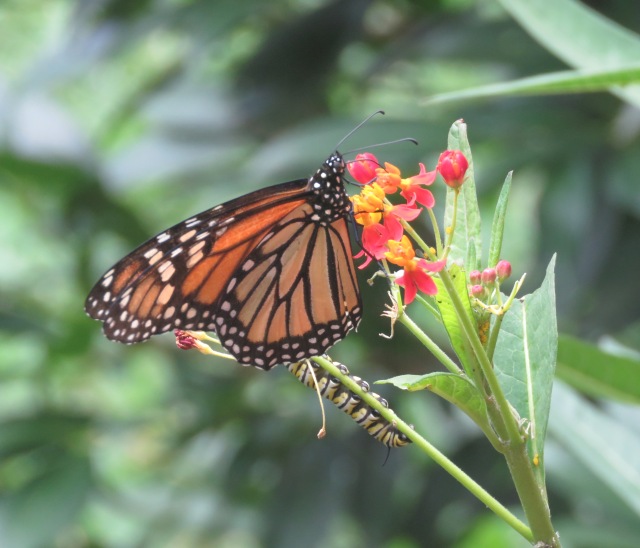 Monarch butterfly in foreground, caterpillar behind

caterpillars. I took this picture in our backyard a couple hours ago. 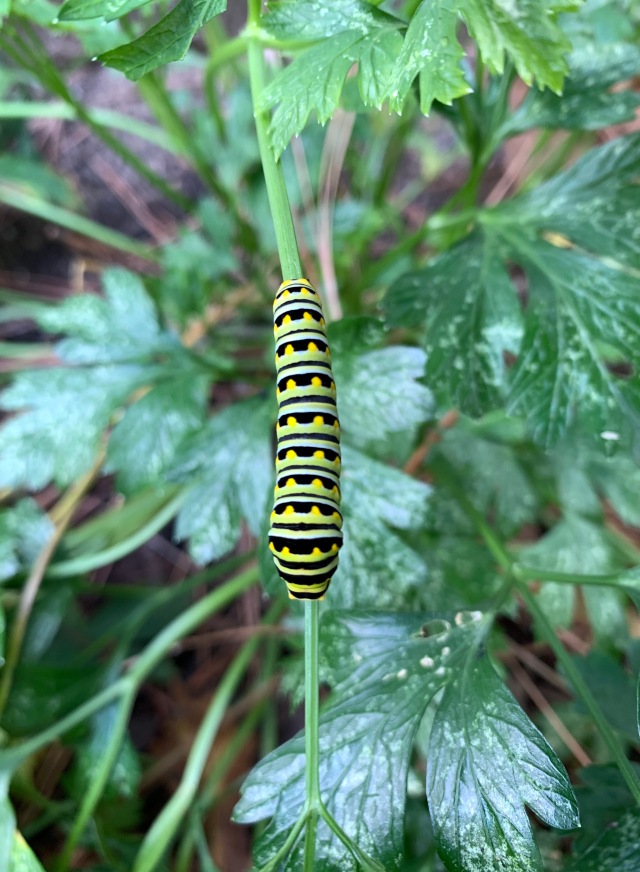 Since I’m fascinated with this stuff (indulge me, please) I’m posting a comparison picture of a milkweed caterpillar (Monarch butterfly caterpillar) for comparison. Note the differences and similarities; they’re subtle but (IMO) unmistakable:

As an aside, where the butterfly flowers are, we have bird feeders right next to them. When you feed birds you learn quickly they are in every way unconcerned about dropping a whole, whole, whole lot of uneaten seed on the ground. It doesn’t go to waste. A handful of birds pick it up off the ground, but primarily mourning doves. Squirrels help themselves regularly but from a photography standpoint, they are only moderately more attractive than starlings, and even that is questionable. But if you have bird seed and birds and mourning doves and starlings and squirrels, you’re also going to have chipmunks. And they are attractive. And this is a true story – among their survival strategies is to carry large amounts of seed in their cheeks so they can take it underground and eat it unbothered by marauding housecats or hawks or dogs. This is a small animal with a large amount of food:

I got a cool picture of a hornet inside a rotting pawpaw at the river yesterday. I don’t know what that cloth is underneath it. This was on a muddy secluded spot under a little bush: 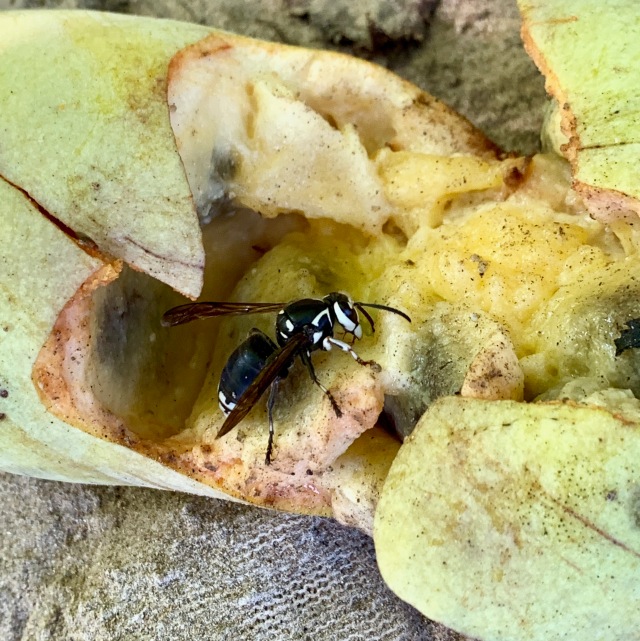 Look at that thing. But pawpaws taste so good. I can see why it was in there.

Speaking of gorgeous flowers, here is our backyard hibiscus. I took this picture at 1:00 this afternoon:

One of Evelyn’s prolific backyard hibiscus flowers, around noon today

Got a backlit wren on the feeder this week too: 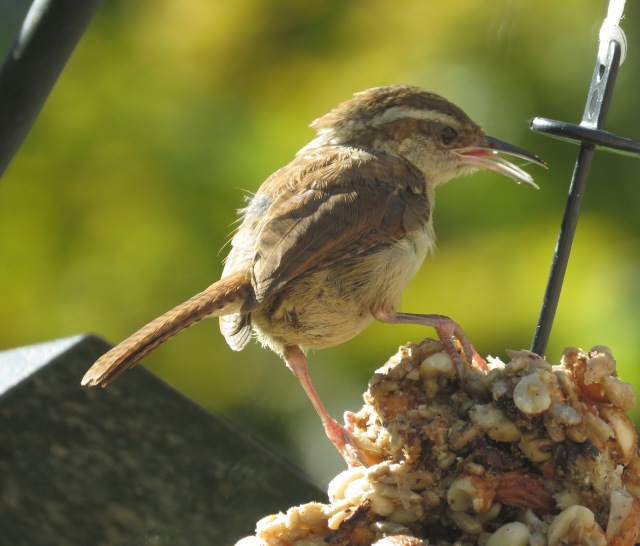 I saw an Eastern American Toad (Anaxyrus americanus) at the river this morning; I haven’t seen tons this year. This one is cute:

It does not get better than this

Those guys look awesome, obviously. When I take pictures of them myself, I’m working on getting a little below they’re level and shooting up. Look how excellent they look:

What’s not to love?

I was down there yesterday with another couple of dogs, my old friends Lola and Luna. Here’s the two of them (Luna on the left): 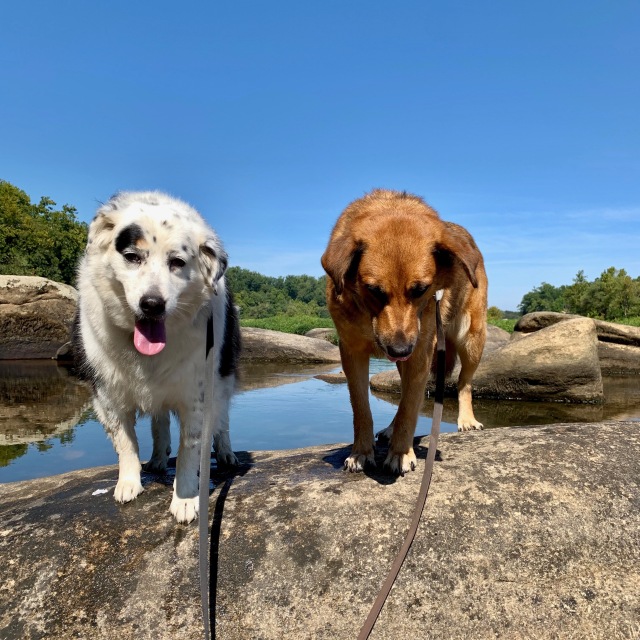 This is the river itself that day. I was speechless when I looked at it yesterday and I’m even speechless now looking at this picture. Because, really, what words can you use? They’re inadequate:

I saw some Jewelweed (Impatiens capensis) flourishing a couple minutes walk from the river’s edge this morning. A web site called Medicinal Plants of the Northeastern United States says that “Crushed leaves in poultice form are a traditional and well-known remedy for poison ivy.” I’ve heard that for years, but never had occasion to try it. The web site opens up with this “Disclaimer: This site is for identification and information purposes only. It is not meant to be used for diagnosis of medical conditions or for prescription of treatments. The information on preparation of remedies is rudimentary and should not be attempted without further consultation. Please see a doctor if you are in any doubt.” But you’re on safe ground with that one. I suspect the worst possible outcome is your poison ivy won’t get better. But you get to see a pretty flower!:

Have an excellent week, come back next week – and bring friends! And read the little story at the end! All best,

This story doesn’t have a moral or a life lesson or a “takeaway” – it was just an oddball event. Things like this happen in big families. Small ones too.

It was a hundred miles from our home in Silver Spring, MD to the cabin. We went west on the interstate for the first half or so, then began funneling down to smaller and smaller roads. The final four miles of pavement was a small single lane of blacktop, Virginia Route 650, a.k.a. “Grove Hill River Road.” You could take it to even smaller single lane blacktop roads with names like Comertown Road, Fleeburg Road, Dam Acres, Dovel Hollow, Lucas Hollow, Cubbage Hollow, Honeyville and more.

A mile or two before we got to our gravel road we were all a little hypnotized and daydreaming and there was a long, straight, steep downhill that ended in a straightaway that didn’t give a ton of incentive to slow down, since why bother.

I feel like Mom was driving, but it was our 1971 Ford Econoline van so this was decades ago and my recollection is perhaps not without fault. Dad would tell this story too, and he would tell it with relish too, but I remember mom’s telling more clearly.

We were near the bottom and going pretty fast and that van didn’t have power steering or power brakes. No power windows, nothing. Anyway, at what turned out to be an inopportune time, a chicken decided to cross the road. Power brakes wouldn’t have made a difference; the van was heavy and it hardly bounced when the front right tire flattened the chicken.

In that era (probably in this era as well), it wasn’t a huge deal. Except of course for the chicken. When people have free roaming chickens in wide open rural areas, they  get hit by cars on occasion.

The tire started thud-thud-thudding each time it went around as we slowed and pulled to the side. The chicken was flattened and so was our tire. It’s funny, even as I type this I can feel the impulse to turn on my flashing lights; I know that’s what Dad did that instant. It must have been him driving. It was a nice day, like it is today in Richmond. We stopped right there by the side of the road to change the tire. The chicken’s lower leg bone – its drumstick – was protruding from the black rubber. It was a moderately good seal, but far from perfect. Or we would have made it farther.

When I was writing this piece, I was trying to recall when Mom was born so I googled her obituary. I reread some of the letters people wrote when she died in 2017, and came across one from our childhood neighbor and long-time family friend Liz. I know I’ve put this in earlier blog posts, but in Liz’s letter she writes that “In all the years I knew her (47) I never heard her say anything bad about anyone; I never saw her cranky or cross.” That’s a nice legacy. To know someone well for half a century, and have them never hear you “say anything bad about anyone” or see you “cranky or cross.” Forty-seven years. That is awesome. She was a good old girl.

I am a rehabilitation counselor. I have many friends with autism and traumatic brain injuries. They help me learn new things constantly. I hike with dogs at the James River in Richmond - a lot. I've completed an Iron distance triathlon a year for 11 years. My most recent was in Wilmington, NC in November, 2013. I currently compete in mid-distance triathlons. And work and hike and take pictures and write and eat.
View all posts by Jay McLaughlin →
This entry was posted in Birds, Carolina wren, Dogs, Flowers, Fun, James River, love, People, Pony Pasture, raptors, Rivers, Shenandoah Valey, simplify, Smiles (including "dog smiles"!) and tagged Dogs, Flowers, Fun, james river, nature, outdoors, People, Pony Pasture, Rivers, smile, Smiles - human AND dog smiles!. Bookmark the permalink.