The kindness of strangers

Posted on September 8, 2019 by Jay McLaughlin 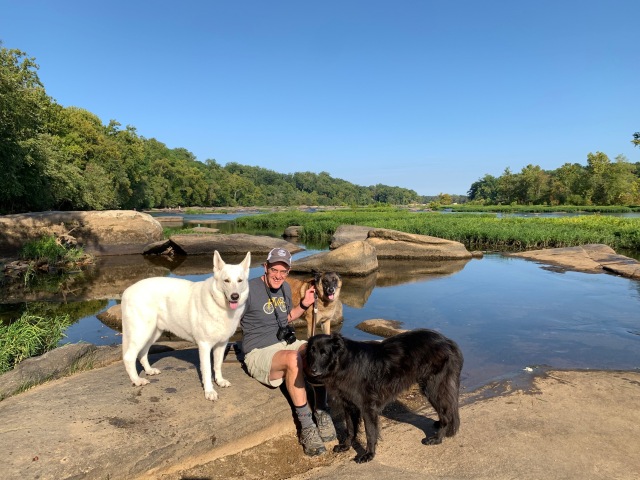 A total stranger took that picture! Just to be kind!

Mackey and Turner and Yuki and I had just gotten out on the rocks this spectacular early September morning, and we saw a young family enjoying the pleasant breeze and relaxing  morning sunlight. And the sound of that water, the best of all possible background noise. There was a young man and a young woman and they had two well behaved little boys, maybe one was five years old and his brother was three. They also had an adorable little mixed breed named Zooey who was around half Turner’s size and had the friendliest, most outgoing personality you’ll ever see in a dog. Dogs always channel the personalities of their owners, so I knew this was a nice family. I said “would one of you mind taking our picture?” and offered my phone. The wife said “sure” and it took her about ten seconds and she took four images and all four were perfect. Then the five of them sauntered off down the river. They were so nice.

Here’s another picture from this week. Sunset is more than an hour earlier than it was in June, so moon photography is getting easier and easier. The sun set at 8:35 on June 21; tomorrow it will set at 7:27. It’s a lot easier to get moon shots when it’s dark so early. This will be more than a little bit geeky; if you find yourself falling asleep, don’t hesitate to skip ahead to something hopefully more interesting. But Friday night I took two pictures of the moon, one at 8:30 and the following at 9:30. You can see the slight change in angle. I also have an astronomy app that gives more detailed data. So I’ll add that data beneath each image: 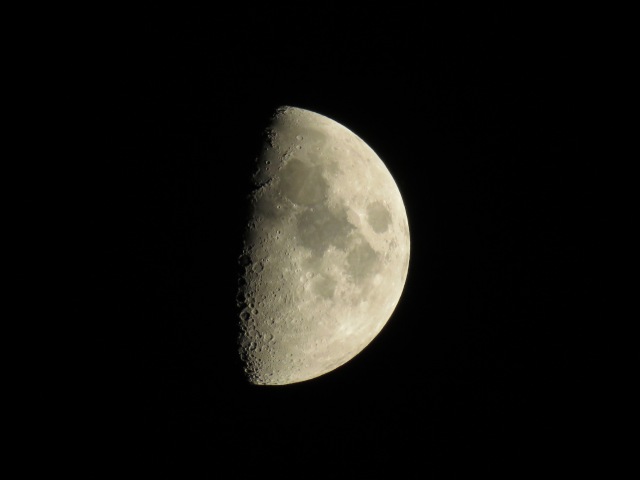 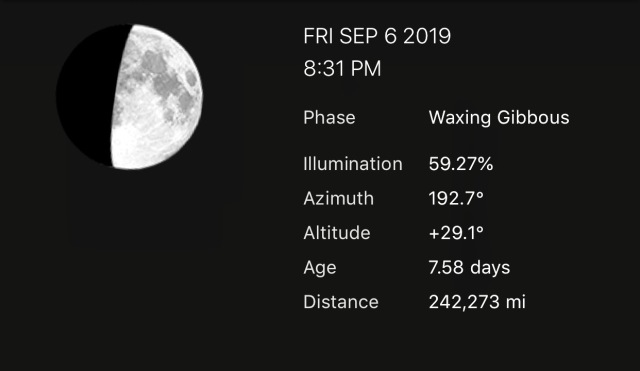 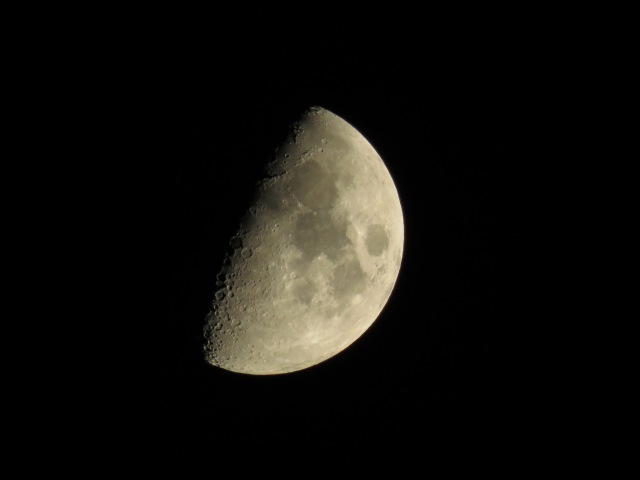 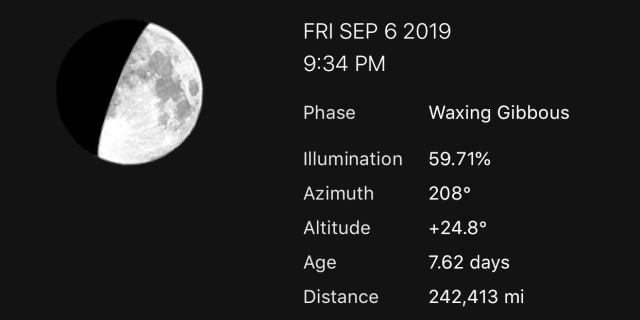 Our next door neighbor (please pardon the abrupt change of subject) was on vacation last week and when he came home he asked me if I’d cut his grass while he was gone. I said I hadn’t – I’d seen his neighbor on the other side cutting it. She wasn’t doing him a huge favor – it’s just a little strip of grass next to her yard. But it was a generous act and since he asked me if I’d done it, it was clear she’d done it on her own. She’s not a stranger, but she certainly was kind. This stuff happens all the time! Multiple times every day!

I spotted another Monarch butterfly on our front flowers Tuesday at lunchtime. This is the first year I’ve paid real close attention to Monarchs, so I’m not 100% clear on their migration times. I’ll tune in on it a little more so I’m more able to anticipate it in 2020. When Evelyn planted those flowers in front of my office window her intention was to make that already beautiful view even more beautiful, and she succeeded. But she also succeeded either wittingly or unwittingly in giving me another little mystery of nature to obsess on. As if I needed another one. Here’s a butterfly from this week: 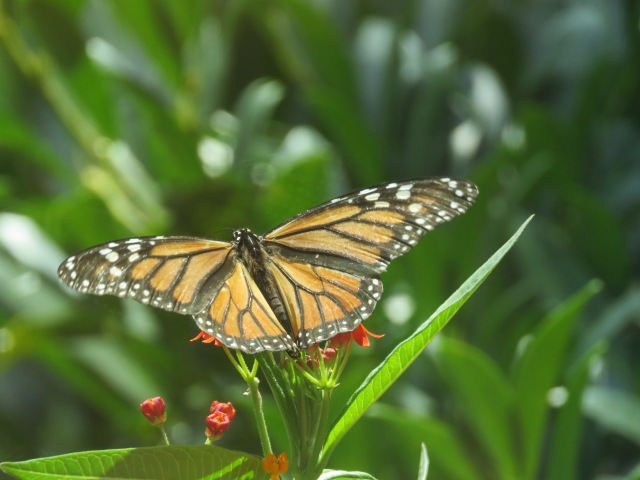 Monarch butterfly outside my office window. This one is looking old. But graceful. I mean, come on, it’s a butterfly!

I also saw another small toad crouching beside a log in Bryan Park Monday afternoon. I believe this is an American toad (Anaxyrus americanus) but if someone said it was a Fowler’s toad (Anaxyrus fowleri), I’d take their word for it.

While researching it a bit, I read these words on the Virginia Herpetological Society web page: “This species closely resembles the southern toad and the Fowler’s toad. These species frequently hybridize making identification difficult. So without further ado, here’s a little red toad I saw in Bryan Park this week: 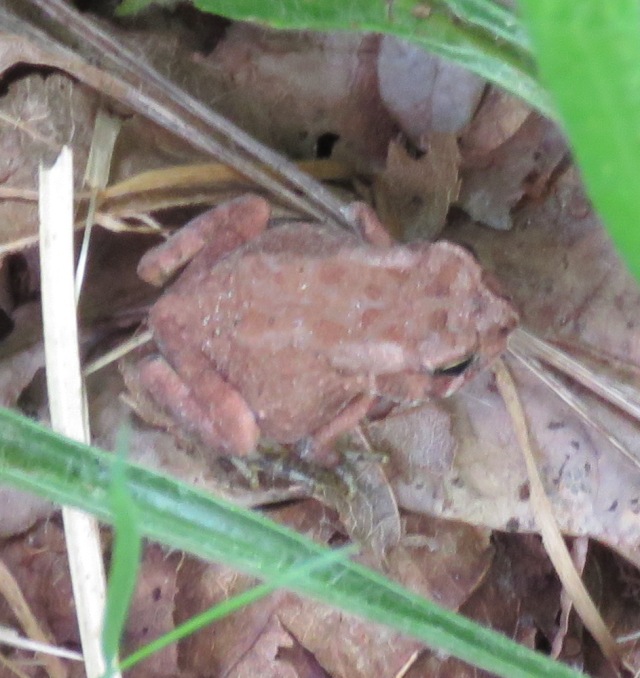 Toad in center of picture

I had to zoom in a whole lot to make that little creature visible. If they don’t move, they disappear.

Ev’s roses are enjoying the pretty weather – they’re getting prettier! I took this picture yesterday around noon: 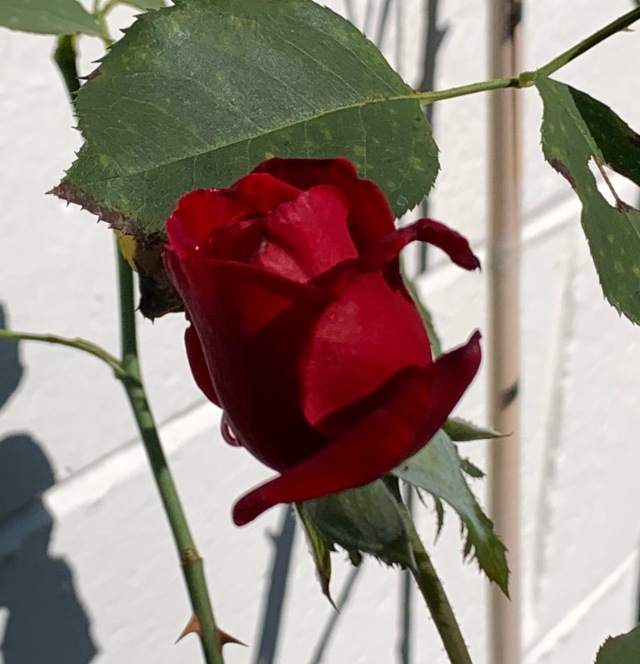 A little dark but so pretty!

And boy are these beautyberries living up to their name: 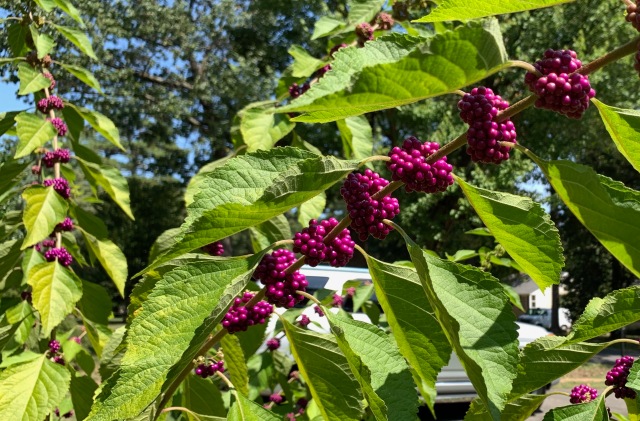 Beautyberries from today on the northeast corner of our house. Their name is well-deserved! And they’re native!

There was a solid article in this week’s New York Times called The Trick to Life Is to Keep Moving by Devi Lockwood. Ms. Lockwood spent a great deal of time with a woman half a century older than she was, a poet and activist named Cora Brooks. Ms. Lockwood said that they “talked about death, often.” Ms. Brooks’ response was “I’m in the afterlife already,” […] “Each day is a bonus.” I don’t think about death often – almost never. But I still feel that “I’m in the afterlife already,” and “Each day is a bonus.” I mean, look at that river! Those dogs! Those nice people! Take my word for it – they are all angels.

Speaking of Evelyn’s green thumb. Our hyacinth (like our beautyberries and roses and nasturtiums and all the other photosynthetic life forms in our house and yard) is happy, happy, happy. Have a look: 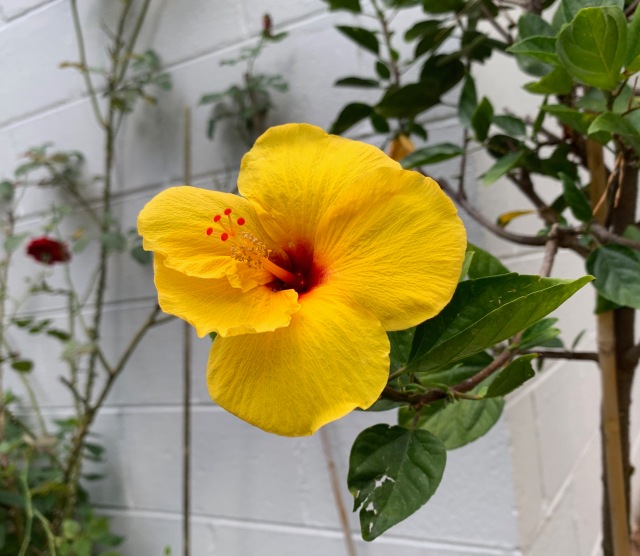 This didn’t make great pictures, but I’ll tell you – pawpaws. I brought my trusty Swiss Army knife and a ziploc bag to the river this morning and brought home a few tasty slices of fresh pawpaw. I tried them in oatmeal and I tried them in vanilla ice cream – both are perfect. But you have to do it real, real quick, because pawpaws have effectively zero shelf life. They still taste good for a while, but they’re really only fresh while you’re down at the river.

For you non-snake people, I saw zero snakes at Deep Run this week – that’s a first since April. There may be a few still around, but I was looking and saw zero.

Almost forgot – I saw a cute caterpillar just before we got back to the car at Pony Pasture this morning. Have a look – and come back next week! 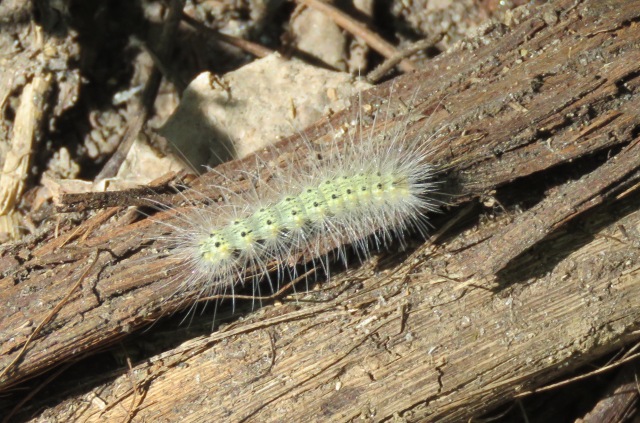 I am a rehabilitation counselor. I have many friends with autism and traumatic brain injuries. They help me learn new things constantly. I hike with dogs at the James River in Richmond - a lot. I've completed an Iron distance triathlon a year for 11 years. My most recent was in Wilmington, NC in November, 2013. I currently compete in mid-distance triathlons. And work and hike and take pictures and write and eat.
View all posts by Jay McLaughlin →
This entry was posted in Birds, Bryan Park, Dogs, Flowers, Fun, hyacinths, Insects, James River, love, moon, Pony Pasture, Rivers, roses, simplify, Smiles (including "dog smiles"!) and tagged bryan park, Dogs, Flowers, Fun, james river, nature, outdoors, People, pictures of the moon, Pony Pasture, Rivers, Roses, smile, Smiles - human AND dog smiles!, waxing gibbous moon. Bookmark the permalink.

4 Responses to The kindness of strangers