The rebirth of Corned Beef Row

Evelyn and I rode Amtrak to Baltimore this weekend and had an excellent time with my niece Aileen and her friend Dylan. My sister Katie (Aileen’s mom) even met us today for brunch! We ate brunch at, and I am not making this up, on “Baltimore’s famed ‘Corned Beef Row,” which, who even knew. Not to mention the fact – I documented this with a photograph – that we ate at the corner of Lombard Street and Horseradish Lane! I’ll put in a few pics from our trip in a minute. But first check out what I saw earlier this week at Deep Run: 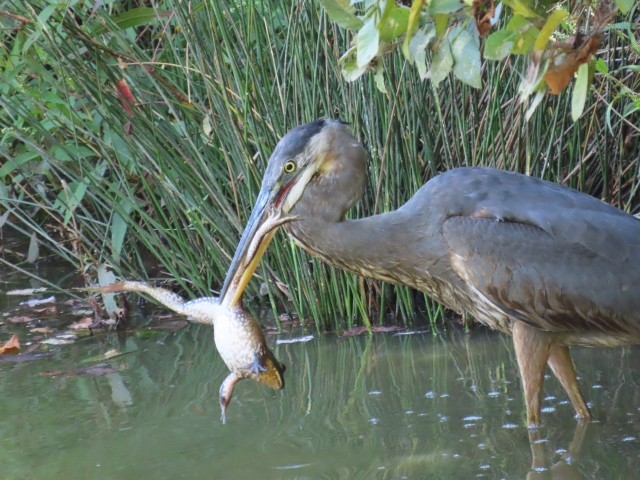 Great Blue Heron preparing to have a frog in its throat

Monday was sweltering. This is how the white squirrel at Deep Run chose to cool off:

I work a few days each week at a residential place for adults with Traumatic Brain Injuries (TBI’s). I am a Maryland native and there is another Maryland native around my age spending some time there while he recovers from his accident. I’m from Silver Spring, he’s from Baltimore. We talk about the Orioles a lot, and when I told him I was going to spend this weekend in Baltimore he immediately said “You have to have brunch at Attman’s Deli!” I’d never even heard of it! And it was established in 1915! One meal there convinced me why they’re still doing a booming business after one hundred and four years.

But wait a second – here is the train we rode north yesterday morning – Amtrak locomotive number 184, a P42DC in the Phase IV paint scheme. It’s a long story even by train nerd standards, but Amtrak repainted a handful of locomotives to commemorate their 40th anniversary in 2011. Here’s the locomotive that pulled us from Richmond to Washington. It’s a diesel locomotive. In Washington they take the diesel locomotive off and pull the rest of the way with an electric locomotive: 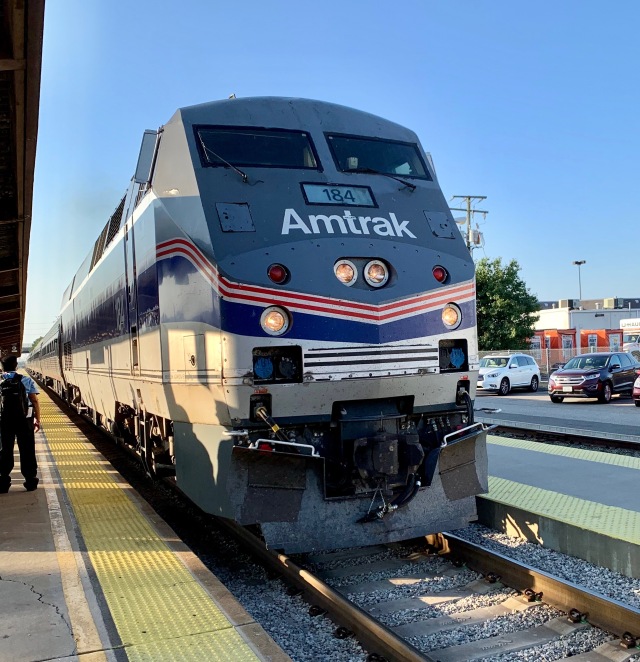 So – people too! And food, of course! Here are the five of us at Attman’s today at 11:52. Out of the five people in this photograph, only one is an enthusiastic photographer, and you’ll notice his obliviousness in blocking out his own face: 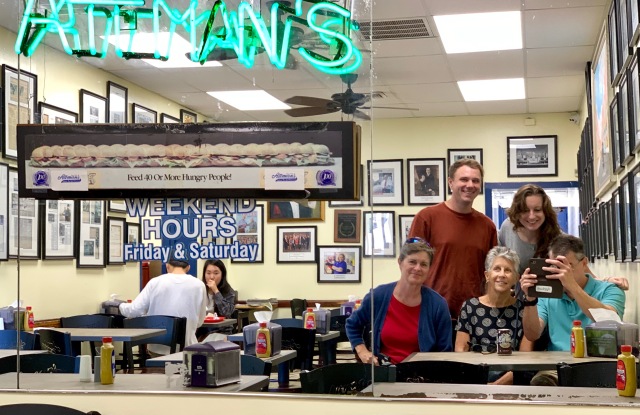 We had a fascinating visit at the Baltimore Museum of Art. I took like a thousand pictures, but we just got home and I have to go to bed! My favorite exhibit was Slavery, The Prison Industrial Complex: Photographs by Keith Calhoun and Chandra McCormick. I’ve read a couple books and seen a movie or two about the Louisiana State Penitentiary at Angola but they hardly prepared me for this unsparing exhibit. Take the train to Baltimore and see for yourself! Remarkable but painful. If it slips your mind how cruelly human beings can treat one another, that exhibit will bring it into sharp and literal focus.

You could also choose to focus on how kindly human beings can treat one another – and that’s the way most of us are most of the time. It’s easy to forget.

I’m getting lost a little here.

This is Evelyn and me with Aileen’s cat Pancake – who stood in for Mackey and Dash and Turner while we were away from home. I think I’ve met Pancake maybe once, years ago, or possibly never. I know Evelyn has never met him. But when we walked in the apartment he greeted us in a manner that suggested perhaps he’d been waiting his whole life for the privilege. The friendliest cat ever:

Photographer and cat owner: Aileen. Cat: Pancake
Plus Evelyn and me

We saw plenty of nice dogs too, and lots of birds, but the remaining late September flowers were still striking. We were staying on the eleventh floor of our hotel. But this pink hibiscus was growing across the street, and we probably could have seen it from our room:

We also had a great lunch yesterday at Dukem Ethiopian Restaurant but I didn’t get any pictures! And dinner that evening at The Helmand on North Charles Street, “Celebrating 30 years of fine Afghan cuisine in Baltimore.” After Ethiopian and Afghan cuisine on Saturday, the only place I photographed was Attman’s on Sunday. Here it is from the outside: 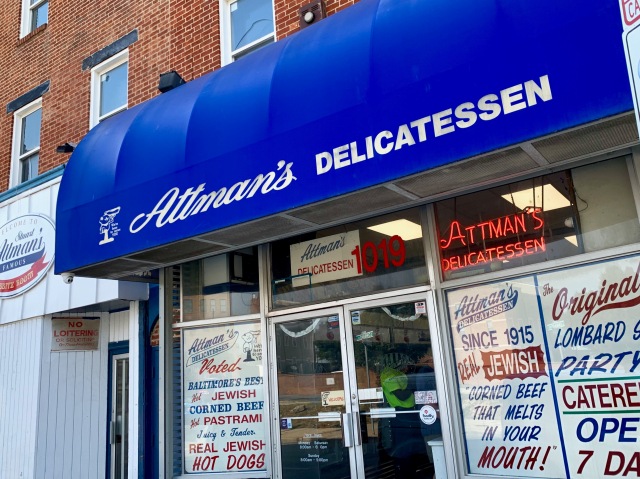 Street sign in front of Attman’s (on Corned Beef Row): 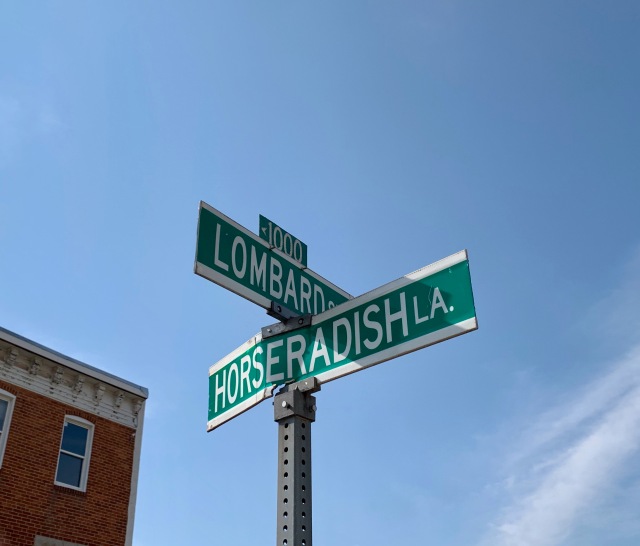 That sign alone was worth the trip. On Corned Beef Row. Seriously.

Here’s the view from the top floor of the hotel where we stayed – The Revival at 101 West Monument Street:

Downtown Baltimore from the restaurant on top of our hotel. THAT was worth the whole trip!

I could have done a hundred pictures of just the train station – it was gorgeous and welcoming and worth a visit on its own. But the only picture I took was a stained glass skylight! I wish I’d gotten a picture that would have gone perfect with this – a giant cook at Attman’s had a tattoo of this stained glass running the length of his right forearm. Another reason to visit Attman’s! Here’s the skylight:

I’d like to do a lot more with this but I’m headed for bed. Have a great week,

I am a rehabilitation counselor. I have many friends with autism and traumatic brain injuries. They help me learn new things constantly. I hike with dogs at the James River in Richmond - a lot. I've completed an Iron distance triathlon a year for 11 years. My most recent was in Wilmington, NC in November, 2013. I currently compete in mid-distance triathlons. And work and hike and take pictures and write and eat.
View all posts by Jay McLaughlin →
This entry was posted in Rivers. Bookmark the permalink.