I was looking through my pictures for the week – I have some nice ones – working on a theme. I was “casting about” for a theme. I looked to my right on my desk and, inexplicably, that picture was lying under my right elbow. There were many others of a similar vintage but that one was on top. This is what it said on the back:

Back of that picture: “Easter ’63” – my mom’s handwriting, back when it was smooth and graceful

My handwriting has always been illegible, similar to  my father’s. But mom wrote in that graceful, elegant hand until it started to get away from her a little in her mid-seventies. I’m not sure when she wrote that, but it was a long time ago. I’m wearing a stylish red cap, plaid shorts and suspenders, a white long-sleeved shirt and white shoes. I was just over eighteen months old. Katie’s next to me, and mom is holding Sheila, who was not yet two months old. Mom was twenty-six years old in that picture. Dad was twenty-seven. Kevin and Shane were still a couple of years in the future. Sadly missing here – a story I may share at some point – is our sister Anne Michele, who was born on a pretty September day in 1960 but lived for only a week.

A quick break. For one of Evelyn’s breathtaking roses. These roses were well established when I moved to this house eighteen years ago (!). You know they’re tough plants because they survived my neglect – it was thorough – until Evelyn moved here in 2012. Our friend Judith tells us this is a Don Juan rose and that requires a lot of attention. I took this picture next to the garage Thursday evening near dog feeding time (5:30):

That story about Anne Michele is a crude way to leave off that paragraph and that subject. I’ll return to it a little – flesh it out a little – at the end of this blog post. But I need to do it more justice. Mom and Dad never hid it from us, it was never a family secret. But talking about Ann Michele was not something mom and dad spent time on. I’m confident she was never far from their thoughts, but our house was always – every single day – so full and lively and active, they couldn’t dwell on it. Or much of anything else – raising us was a big job!

I’m staring intently  at the sidewalk in the picture up there. Probably at an ant or some other insect. Mom and dad encouraged curiosity, mainly because they were both curious by nature. Dad was curious about everything – everything. He loved to know how things worked and why things happened. Cars, seasons, boats, people, birds, wind, gravity, computers, all of it. Dad’s curiosity was diverse and insatiable and never rested. But he also never learned things half way. When he found something that he was truly fascinated with – it seemed like everything – he read everything he could find. Dad was an only child and his mother was a librarian and I’m certain she encouraged him every day. The same way he encouraged the five of us.

The white squirrel has reappeared for the first time since May at Deep Run Park in western Henrico. I’m certain this is the same one. It’s probably been up in the tree canopy all summer. But squirrels are busy gathering nuts for the coming winter, and this one was busy gathering hickory nuts this week. I’ll keep my eyes out and get a better image soon. They’re just a color variation of the gray squirrels we see 365 days a year, but they are (to me) unforgettable: 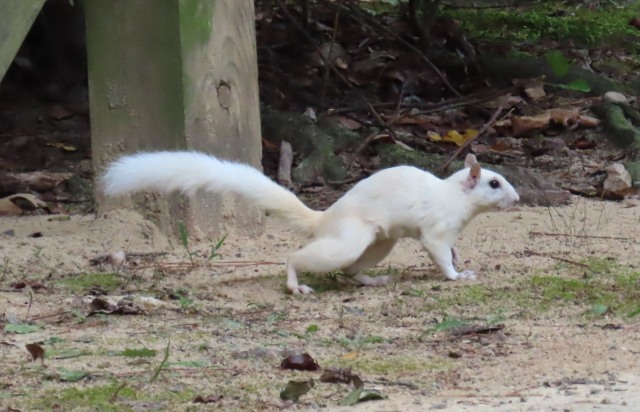 Also at Deep Run this week – in addition to the white squirrel – I caught a quick glimpse of a handsome five-lined skink:

Speaking of curiosity and encouragement – I have a new camera. I had it in the car yesterday when Evelyn and I went out for lunch at Fresca on Addison in the Fan. We saw passion flowers and gardenias growing against a warm south facing brick wall on West Cary Street. That’s where I photographed this enormous bee about to land on a passion flower:

Giant bee in upper right, about to land on a passion flower

I’d originally planned this post to be about the recent predictability of two different Red-tails on my morning drive. Wednesday morning of the week before last (9/4) I was driving in Glen Allen and saw a big female Red-tail perched on the cross at Discovery United Methodist Church.

I headed down Lauderdale, turned left on Patterson and ten minutes later pulled into Westhampton Memorial Park and photographed this slender male Red-tail: 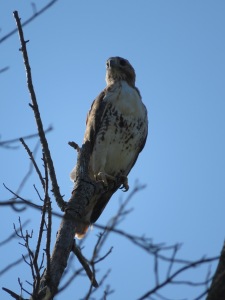 Monday of this week, I drove the same route at the same time and photographed two more Red-tails in the same spots. The first on the same cross, the second in the same tree: 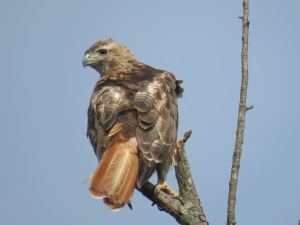 When firetrucks pass our house, Mackey and Turner howl – every single time. This morning we were driving back from the river, headed north on Forest Avenue about to cross Patterson. Henrico County Fire Station 8 is on the northwest corner of that intersection, at 8000 Patterson Avenue. We were stopped at the light when the sirens began to wail and the trucks rolled out and Mackey and Turner chimed in. I took an eleven second video. When I showed it to Evelyn she said “That’s blog worthy.” If you have eleven seconds to spare, here are Mackey and Turner singing their enthusiastic hearts out at 10:41 this morning. I call it Greeting the firefighters.

Speaking of Mackey and Turner – I usually put their picture at the beginning of the blog. Our buddy Yuki didn’t join us at the river this morning, but this picture is wonderful just the same:

Mackey and Turner at Pony Pasture this fine September morning

Regarding several paragraphs ago when I casually mentioned I’d return to the subject of our deceased sister “at the end of this blog post.” That mention was, as you may have surmised, easier said than done. The truth is, I don’t know a whole lot about her. I’ve seen her tombstone; she lived for seven days. I talked about her ever so briefly with my dad, years and years and years ago. As I’m typing, I keep referring to her as “it”; I’ve gone back and used a pronoun with gender so she’s a human being and not an event. If she cast a pall over our upbringing; I am unaware of it. If anything, her loss made my parents more grateful and enthusiastic and determined to raise more healthy and grateful and enthusiastic children. Five living, breathing expressions of health and gratitude and enthusiasm. More often than not, anyway.

Do I sound as if I should have thought this through more? I should have. But rather than letting the perfect be the enemy of the good, I’ll begin with this.

PS The latest sunset of the summer was 8:35. Tonight it set at 7:18. I’m having a difficult time with the light! We’d been out and just walked in the house when Evelyn told me there were new Monarch Butterfly caterpillars on the flowers out front. One looks pretty much like another, but I don’t get tired of them. I’m sorry if you do! But I took this picture at 7:20 this evening: 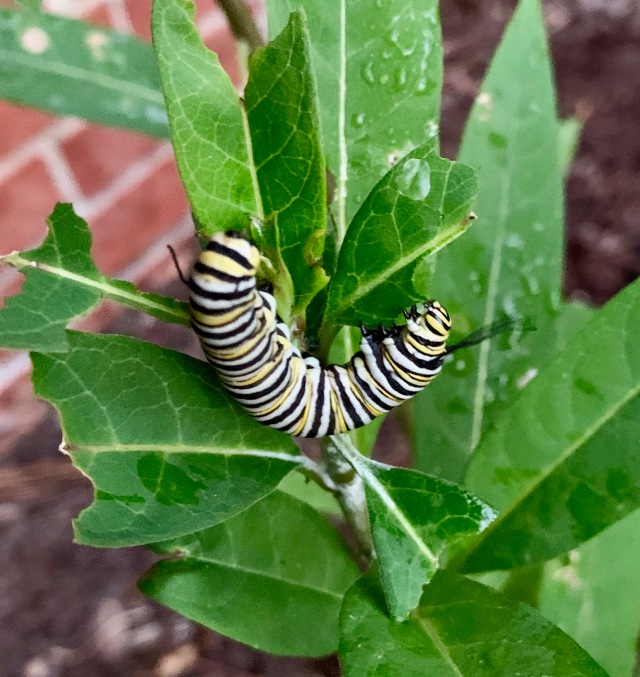 Monarch butterfly caterpillar in our front yard
two (2) minutes after sunset this evening:

These are the flowers it was climbing toward. I can see why they’d be irresistible:

How could a butterfly resist this? It probably reminds them of a family member.

I am a rehabilitation counselor. I have many friends with autism and traumatic brain injuries. They help me learn new things constantly. I hike with dogs at the James River in Richmond - a lot. I've completed an Iron distance triathlon a year for 11 years. My most recent was in Wilmington, NC in November, 2013. I currently compete in mid-distance triathlons. And work and hike and take pictures and write and eat.
View all posts by Jay McLaughlin →
This entry was posted in Birds, Dogs, Flowers, Fun, Insects, James River, love, People, Pony Pasture, raptors, Red-tailed hawks, Rivers, roses, simplify, Smiles (including "dog smiles"!), squirrels and tagged Dogs, Flowers, Fun, james river, nature, outdoors, People, Pony Pasture, Red-tailed hawks, Rivers, Roses, smile, Smiles - human AND dog smiles!. Bookmark the permalink.

2 Responses to Casting about…